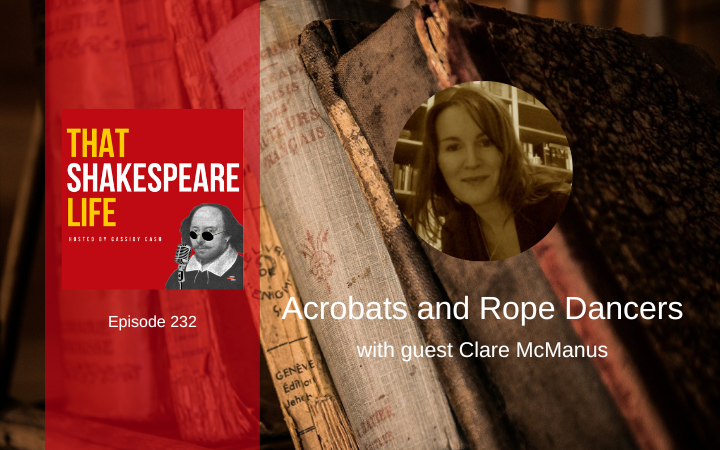 In Shakespeare’s Love’s Labour’s Lost, he writes about a tumbler wearing colours in their hoop. This reference is to a specific act of theater performance called tumbling. If you’ve already studied the all-male stage we know Shakespeare had at his theater, you may be tempted to think that tumblers were men. However, as the research of the project Engendering the Stage aims to bring to light, historical records for Shakespeare’s lifetime show that in terms of the theatre industry as a whole for the late 16th and early 17th century, theater performance was far from all male. In fact, women were not only prominent players in public performance, but they weren’t entirely excluded on the basis of religion and morality, either, because we have records of distinguished women from one of the strictest religious sects in England, the Puritans, acting on stage in full costume. To help us unpack this conundrum and explore this world of the travelling street performers where elaborate and complicated feats of acrobatics, tight-rope walking, tumbling and even trapeze acts would have taken place using women at center stage, we welcome author of Women on the Renaissance Stage and contributor to the Engendering the Stage project, Professor Clare McManus.

Clare McManus is Professor of Early Modern Literature and Theatre at the University of Roehampton. She publishes widely on Shakespearean women’s performance, and her books include Women on the Renaissance Stage (2002) and Women and Culture at the Courts of the Stuart Queens (2003). She is an editor of Shakespeare, Fletcher, Shirley and Marston, and she collaborates with two international research groups: Theatre Without Borders investigates transnational early modern theatre; Engendering the Stage uses archival and performance research to investigate the gendering of early modern performance, focusing on girls, women and gender nonconforming performers. Clare is currently completing a book on the way that popular women’s performance, such as rope-dancing, shapes the way femininity is enacted on the Shakespearean stage.

I’ll be asking Clare McManus about:

There were several types of acrobatics and tumbling that were part of the common street spectacles and stage performances of the 16-17th century. There was rope dancing, tight rope walking, tumbling, and the most dangerous of them all, the flyer.

Clare describes the flyer as someone who “ties a rope to the top of a tower and fastenings it in the middle of a square, and takes a wooden board, straps themselves to the board and…[straps] fireworks to their arms and then slides head first down the rope.”

There was at least one flyer who performed before Edward VI that died in the attempt, landing at the feet of the young King following his performance. Another famous flyer named Charles was a 70 year old man, and a surgeon when he wasn’t an acrobat, that died performing his flying trick when his firework didn’t fire on one arm. The unbalanced result meant the man fell to his death from the height of the rope.

Not unlike Gypsy families we read about from the 19-20th centuries, acrobatic troupes were often family based. As Clare explains, the leader of one such family was Sisley Peadle.

“We know that there are companies of these rope dancers, tumblers, contortionists, and they were organized by family groupings, by blood or kinship. There’s a great example of a multigenerational troupe..organized around the Peadle family. The man name is a William Peadle (the father and son are named the same) they run this quite celebrated famous company for about 30 years 1590s-1630s. At one point they are run by a woman, there is a license from 1631, which names the wife of the junior William Peadle, Sicily Peadle, her son Thomas is in the group with another named performer, they are [mawing – Cassidy is unsure of the spelling here] (wrestling), and she’s leading them with a license to perform in London.

We know they play at court, so they play for the King and Queen James VI/I and Anne of Denmark, and [while James is] considered every elit[ist], but he enjoyed the Peadles. They also have a base in Flushing, Brandenburg, Leiden, so they are international multigenerational and they move around the country, between countries, and then you have this women who in the 1630s at least is a troupe leader. It’s very likely that she’s a rope dancer as well.

Acrobats and tumblers, rope dancers, rope walkers, and many other feats of visual spectacle did perform in the streets of London and as a travelling companies around the countryside. However, we have records that tell us these performers were also present in the same venues as playing companies, often appearing on the same stage.

Clare shares the story of one performer that appeared at the Red Bull theater in London in the mid 17th century.

Mid17th C, there’s a performer of color, called a Turk, but we don’t know if he was a Turk. It could mean someone from several geographical places. His name ends up in the predecessor of the newspaper being celebrated for his amazing performances in the Red Bull, high above the stage, there’s an anecdote in which a woman says a racist commonplace comparing this black performer to the devil, but then in the newspaper it gets punctured, and another woman says “I know him, I know his mother, he’s from the Blackfriars” she tells us “He learned his art when he was a young sea boy” so he learned it in part by being a sailor, but he also learned it from a “Jack pudding” and that’s a clown. So it’s a combination of physical ability and skill on the ropes that’s shared with people t sea and people in playhouses.