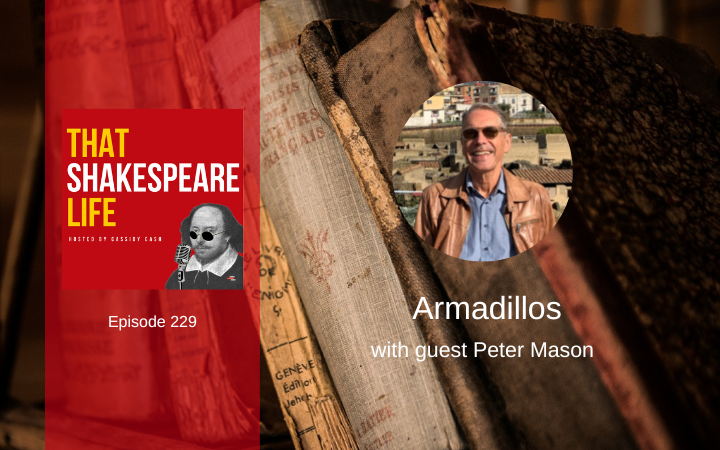 Armadillos are a fascinating animal, and for the 16th century they were an object of luxury. Many members of the nobility in 16th century England made a hobby out of collecting wild and exotic specimens of animals that were being discovered and brought to Europe by explorers, travelers, and naturalists who were keen to record all the world’s animals. One animal that was new to Shakespeare’s England during his lifetime was the armadillo. One prime example of the armadillo in the culture of the 16th century is the armadillo featured in a piece of embroidery by Mary Queen of Scots. Our guest this week, Peter Mason, writes about this specific armadillo in his article, Mary’s Armadillo for New World Objects of Knowledge: A Cabinet of Curiosities. Peter joins us this week to share the history of the armadillo, where it came from originally, how it arrived in Europe, and the many difference variances from scales to fur that encompass the depictions of the armadillo we find from Shakespeare’s lifetime.

British-Italian author Peter Mason studied Literæ Humaniores at the University of Oxford and Anthropology at the University of Utrecht. Best known for Deconstructing America. Representations of the Other (1990) and Infelicities. Representations of the Exotic (1998) he has lectured and published widely on the history of art and visual culture in Europe and the Americas. He has been visiting professor in Santiago de Chile and Madrid. Peter lives in Rome and is currently preparing an introduction to Ulisse Aldrovandi to be published by the Chicago University Press in spring 2023.

I’ll be asking Peter Mason about:

Armadillos in Sketches and Naturalist Drawings

Armadillos were native to South America and came to Europe by way of Brazil. Several drawings of armadillos were done from verbal descriptions. That’s how the armadillo came to be represented as a rhinoceros in plaques like the one below. Sir Walter Raleigh had described the armadillo as having armor, “like an armadillo” so naturalists relying on his description only drew the animal to look like the known rhinoceros sketches they had seen before. The first person to draw an armadillo from life was Pierre Belon. Peter explains,

The earliest image of an armadillo where the person responsible for the description says “I saw this animal live” is the french naturalist Pierre Belon. He saw it on the market in Constantinople, he travelled widely. He mentions he saw an armadillo at the market. When he described his travels, his artist included an image of an armadillo and Conrad Gessner had a network for obtaining images and it’s a question if he saw one himself, but all the scientific drawers sought out pictures of animals or first hand descriptions….[Andrew Thevet was a] naturalist who went to Brazil for 10 weeks. He would have seen them in Brazil. These were travellers whose published accounts were published with images and Gessner would have had access to these, and Gessner’s looked different from the French ones.

Armadillo and the Exploration of Continents

The exploration of the world influenced the world’s understanding and use of the armadillo in drawings of the globe. As Peter points out, North America was relatively unexplored by this time so the understanding of America, such that many representations of “America” being described as the armadillo is based on the fact that “America” was largely synonymous with “Brazil” where armadillos were native and plentiful.

“When Columbus arrived in the Caribbean, he didn’t go to North America at all, America meant South America until the later expeditions (1580s-1590s), Example 1585 to Virginia, artist draws the animals but there wasn’t the word “America” refers to mainly Brazil in the early maps, so it still seems to have a specificity until the mid 17th century. [Another example of the armadillo in art is] the Fountain of the Four Rivers in Rome, there is an armadillo sculpted there and the Rio de la Plata, and it’s in Argentina…”

Armadillos as a Symbol for America

In many paintings and drawings that represented the world, America (North and South America were known collectively as “America” during this time period), would symbolically represent this part of the world as an armadillo.

Continents were associated with animals. Africa was the elephant. For South America, the Armadillo was a good choice to represent the four continents, because it was unique and hard to mistake for other animals and it was clear what you meant to represent. Some of the earliest images of armadillos, the scientific ones are from the 1550s, so around the people knew what they looked like but not what kind of scale they were on.

In the 16th century (and indeed centuries surrounding this time period), sketches of animals for scientific record were often based on here say. Peter explains that the understanding of the armadillo suffered from a garbled message about the physical attributes of the animal.

… published three versions of armadillos. In that case these were the images that were coming in. Woman sitting on a  giant armadillo–looks devilish, the animal had sinister connotations for some people. When it comes to representations which are hard to imagine that it is an armadillo, there’s a Turkish one around the end of the 16th century, where an Ottoman Turkish account of the early accounts of the discovery of America and what people found there. The author had not seen them but the manuscripts include armadillos and possum and others. The text mentions “armadillo resembles in shape a horse with a pack saddle, a beast of burden, natural pack saddle and under which his feet and tail protrude and it’s the size of a dog.” based on that, his artists did a miniature horse with the head and tail of a horse and on the back it has a blanket on the back. And “Armadillo” means “armored horse” looked not unlike armored horses in parades, etc. There’s a German plaque of America and there’s an animal in then background there’s a rhinoceros, but when Sir Walter Raleigh was in the army, he described the armadillo as having armor “like a rhinoceros” and so the drawing included the armadillo as a rhinoceros.