Don’t act rashly in the height of emotion, Advice From Romeo and Juliet 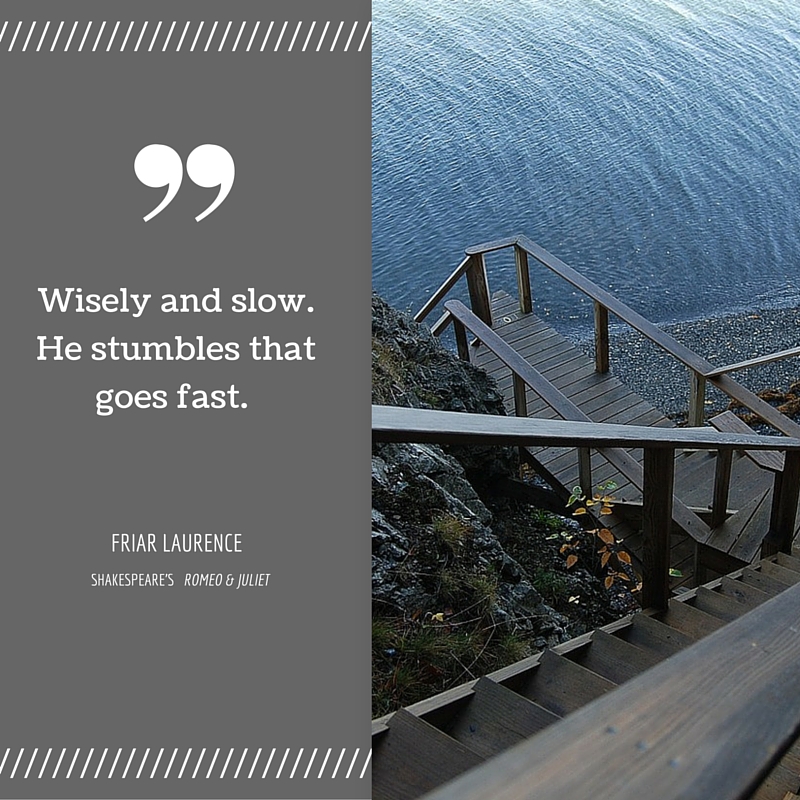 In Romeo and Juliet, Friar Laurence tells Romeo “Wisely and slow. They stumble that run fast.” (Act 2, Scene 3) This is the part where Romeo is freaking out about not being able to be with Juliet and is enlisting the Friar’s help to craft a plan. The Friar says, basically, “this is crazy, but I think if we plan wisely and deliberately lay our steps, then we can pull it off.”
“This could work.” As Seth Godin says
Shakespeare’s play features two children, acting as children will, and creating literally huge catastrophes in the process. Innocence sacrificed on the alter of family hate. The lesson for entrepreneurs, however, is the dangers of acting in the heat of emotion—-or chasing the quick solution instead of the right one.
As entrepreneurs, everyone is eager to jump off the cliff, start a wordpress blog, and be raking in the millions next Tuesday. We are, as Romeo said, “Oh, let us hence. I stand on sudden haste”
Constantly in a hurry, excited about the possibilities, and chomping at the bit. That’s great– but here’s a reality that needs to go with it, and it’s an important realization because it will help you avoid disappointment and ultimately—avoid quitting before you succeed.
If you talk to anyone whose actually achieved that millionaire status, there’s a great deal of work that comes ahead of that 4 Hour Workweek we all crave.
To give you an example of what kind of work I’m talking about here’s a quote from one of the case study profiles Tim Ferriss shares on his website (read Tim’s article here). This is a guy who currently lives the 4 Hour Lifestyle –clocking a little over 5 hours a week dedicated to business. But look what his website tells you it took to get there:

“In 2004, I made this available to other teachers, started charging a monthly fee, and called it Music Teacher’s Helper. After four years of dedicated effort and 70-80 hour weeks, I was earning just enough to quit my job ($1,500/month) and focus full-time on my business… Eventually, it grew to the point where I could hire some help, live wherever I want, and enjoy a “4 hour work week” lifestyle.” – Brandon Pearce, owner at PearceOnEarth (source)

He straight up tells you it took him a high level of commitment, vision, and drive. He was literally climbing a mountain and now he enjoys the view. They key things from this story are just what Friar Laurence was trying to tell Romeo— you have to know where you are going, why you want to get there, how you plan to get there, then you stick to the plan. That’s the formula for success.
While analogies involving helicopters, sky lifts, and other versions of “get to the top fast” might be revolving inside that creative mind of yours right now, the reality is that those helicopters are what we call “get rich quick” schemes and it’s not the way of successful entrepreneurs who leave a legacy–or the Shakespearean way, either my friend. Plus, it rarely works.
Take courage in knowing, from the people who have done it, that steady plodding wins the race. The end is sure when you go wisely and slow. Stick to the plan.
If you’ve read all of Romeo and Juliet, you know that at the end, both main characters die. (Don’t yell at me for plot spoilers. I’m certain this revelation about the end of Romeo and Juliet would be about as damaging to your experience reading the play as watching the Titanic movie someone tell you “the boat sinks.” Surely you knew that much going in.)
Their deaths, you’ll discover in the play, come largely as a result of rash, and childish, behavior done in haste. Literally seconds of thoughtful consideration and we could have had a completely different play–a comedy in the purest definition! Romeo and Juliet being children themselves, the play is that more tragic because you can argue they weren’t old enough to know better.
You, however, are being told by another entrepreneur that rash, hasty, get rich quick attitudes win for nobody. Act your age. Act like a grown up. Act mature. I love that–“act” mature. Even if you aren’t mature. Even if doing the right thing doesn’t come “naturally” do it anyway. Why? Because that’s the way to win. #KnowYourShakespeare
Where are you at in your journey? Base of the mountain? Building your helicopter? 🙂 Tell me about how you choose to go wisely and slow in the comments below.