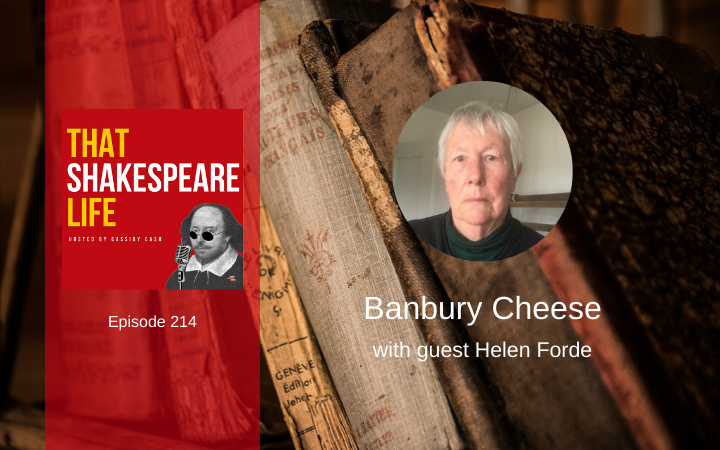 In William Shakespeare’s play, Merry Wives of Windsor, Bardolph declares “You Banbury Cheese!” as an insult. The reason this line is an insult is because for the life of William Shakespeare, Banbury England was famous for making a particular kind of cheese that was thinner on the rind than other cheese typical of the period. Therefore, calling someone a Banbury cheese was akin to calling them a string-bean, or saying they were too thin. It works especially well as a joke for Shakespeare in the play because the character Bardolph is insulting is named, as you might expect, Slender.The joke is a highly contemporary reference by Shakespeare and in order to better understand the history of Banbury England and their famous cheese, we have invited the chair of the Banbury Historical Society, Helen Forde, to visit with us today and explain what made Banbury cheese so unique for Shakespeare’s lifetime.

Helen Forde is a history graduate and archivist, now retired, having worked in local, private and national archives during her career.  At the latter – The National Archives – she was the head of what is now called Collections Care and wrote a book entitled Preservation Management; Helen has also written numerous articles both on archives and on local history. She  worked internationally as well for UNESCO, travelling to many countries and at home taught local history to adult classes in Nottingham and London universities, and post graduate archive students.  SInce retiring, Helen has worked extensively with museums, notably the Postal Museum in London of which she was the chair, and now as a trustee at the local Banbury Museum & Gallery.  Helen is the chair of the Banbury Historical Society and editor of its annual journal, Cake & Cockhorse.

I’ll be asking Helen Forde about:

Cake & Cockhorse, the journal of the Banbury Historical Society available at https://banburyhistoricalsociety.org where there are numerous articles relating to Banbury and the area round the town

While Shakespeare mentions Banbury only once in his plays, the town itself was quite popular during Shakespeare’s lifetime. Drayton, a town just two miles from Banbury is recorded in the Doomsday Book, and according to at least one source, there was a watermill operating near there from 1589 to 1851 (Source: Lobel & Crossley 1969, pp. 103–112.)

The first time we hear in historical record about the popularity of the cheese from this area of England comes from John of Lancaster, 1st Duke of Bedford, who ordered 14 Banbury cheeses sent as supplies to France during the Hundred Years War. The cheese was considered famous at the national level, and enjoyed a status as a prestigious export. Shakespeare immortalized the cheese by using it as an insult in his play, Merry Wives of Windsor.

While we only have one surviving recipe for Banbury Cheese, Helen explains that we can know the cheese’s reputation and shape:

“The 16th century recipe starts with a declaration that a thin mold should be used, and this recipe is the only indication we have about how it is made, but it was pretty famous for being skinny…”

We have very few records on Banbury cheese, but we can know that it was given as gifts and often included in household inventories. Helen identifies the cost of Banbury cheese in her article when she relays that one man tried to use Banbury Cheese to secure a bribe, writing “Two years later [so in 1533]…Nicholas Glossope who wrote ‘I send you 12 Banbury cheeses, half hard, half soft and wish they were worth £20,000.” Twenty thousand pounds is a substantial amount of money in today’s currency. Allowing for inflation and tracking backwards, those cheeses were worth close to 18 million dollars. Helen explains that this reference is likely an exaggeration. However, she explains that this exaggeration shouldn’t diminish the fact that Banbury cheeses were valuable:

They weren’t worth that amount, but he wished they were worth that amount because it it were worth that much it would be a more effective bribe. In 1585, not that long after, Catherine Doiley (spelling?), had cheeses worth just under $700 dollars today, a few years later, man had cheeses appraised at just under $600 dollars, and 50 years later, 150 cheese was sold for $645 dollars for almost double the umber of cheeses, so the value decreased but we can’t compare the quality.

We have historical records indicating some people preferred the flavor of Banbury cheese to other regional cheeses. While we can’t be sure what about Banbury produced a unique taste of cheese, Helen suggests it might have to do with the grasses in Banbury.

[I’m] not aware of any difference in the soil, which is what would make a difference in the flavor, or of any different animals that were housed in Banbury. The geology is largely hard limestone, suited to grassland and therefore cattle. It’s not unusual, but well supplied with springs and wells, where grass was abundant, and made greeting the cows in the late summer easier in Banbury…

The rules about what to include on inventories and what wasn’t was not always clear, and while it was the church authorities who demanded the inventory of the wealth, some people might have gone by local custom in some places, appraising some things in one regions but not somewhere else.

In general, food items were not included, but cheese seems to be the exception. Lots of people with cheesemaking equipment but no mention of cheese in the wills. [Cheese was a] ubiquitous commodity, too common to mention. It’s hard to know what the poor ate, but even they ate cheese.

Cheeses are often made in hard and soft varieties, and Banbury cheese is no exception. There were different kinds of Banbury cheeses but the round shape, specifically, was due to the equipment available for making cheese at the time, as well as the practicality of storing for a long period of time. Helen explains,

[Banbury Cheeses were] made at different times of year, and hard vs soft was about when you intended to eat it. Soft cheeses were eaten quickly and hard cheeses fermented longer and were stored for the winter, when grass wasn’t growing so you couldn’t make cheese. It’s tempting to suggest (though no evidence) that there could have been a sheep’s milk cheese in the area too but there’s no evidence of that at all. The round shape was due to the molds that the curds were poured, and you can get these today for making cheese, they were circular with holes all around the sides, so the whey would run out when the curds were pressed down. The whey that comes from it could be used to be made butter. A around shape was the easiest to store and large cheeses are often referred to as wheels, and some of them are quite large, indeed. There is a reference in Nottingham, to a local custom whereby on a particular day they rolled cheeses down a hill. Easier to move because they rolled like wheels. And cheese with corners was more likely to be damaged, so a round shape made more sense.

The history of Banbury cheese makes it make complete sense as to why Shakespeare would use Banbury as an insult to Slender on the stage in Merry Wives of Windsor. As the Victoria County History explains, “in the sixteenth century the name of Banbury at once brought to the mind of the hearer the famous cheeses.” Source: VCH (1907). “Industries”. In Page, William (ed.). A History of the County of Oxford: Volume 2. British History Online. Victoria County History (VCH). London. pp. 225–277.

And now that you know the history of this famous cheese, it will make sense for you, too, next time you’re watching Merry Wives of Windsor.