Becoming Elizabeth: The History of the Word F**K 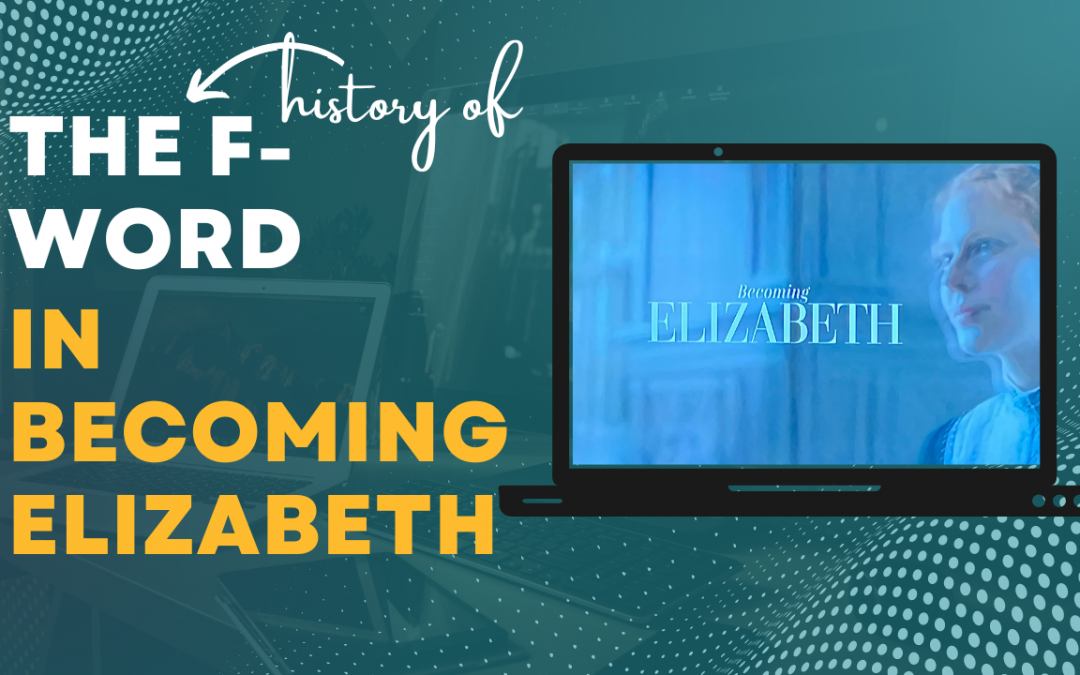 This website uses affiliate links. You can unlock extra history research by becoming a patron.

Some of my twitter friends were waiting up until midnight to catch the very first minutes of Becoming Elizabeth, the 8-episode docu-series from Starz about what it was like for a young Elizabeth Tudor to grow up and become Queen Elizabeth of England.

Episode 1 of 8 aired June 12, and while I was not among the midnight crew, I was first in line to see it during my regular “tv-watching time” for Sunday night ( In case you’re curious, that’s the time before sleeping but after a nice glass of red wine and a chapter or two in whatever book I’m reading ;0 )

It was great fun to follow along with friends online who are checking out the show and the general buzz around it. It certainly appears to be a great historical adaptation and I’m excited to see what unfolds.

As I watched the first episode, I had a few take aways. Here’s my first impression:

Wow, at the f-words! Every character, even a young Edward VI, are constantly expressing their disdain with phrases like “I am the f****ing King!”

Not only do the placement of f-bombs seem to indicate an intentional effort at shock factor, but there aren’t many alternative expletives being thrown about. So it seems as if the only expression for displeasure anyone on the show knows is the f-word.

I was, as it seems was the goal, shocked by the sheer number of f-words in the conversations on this episode. Which, as you might expect from me, got me thinking “Was the word f**k even used as an expletive in the 16th century?”

I have the distinct suspicion that’s not accurate. Of course, I can’t just leave it at my suspicion, I had to investigate and find out. So here’s what I discovered:

F**k was a word in the English language by Shakespeare’s lifetime and John Florio even includes it in his 1598 publication, A Worlde of Wordes

Florio dedicates his dictionary to several nobles, including the Earl of Southhampton, and includes all kinds of words, not just single words but also phrases, idiomatic expressions, exclamations, and other verbal explanations of words from 16th century England.

It is all helpfully organized alphabetically, so I decided to investigate how Florio defines this word.

You can browse through the dictionary yourself here (a treasure trove of words!) Source file

I was a little disappointed by Florio’s lack of definition in his listing of “Fottarie”, but he does include in the defintion of “Fottarie” the words ” jape, sard, swive, and occupy” as presumably, synonyms.

According to an article by The New Republic, we can infer the meaning of “fuck” and “fucking” based on the synonyms:

Many early instances of fuck were actually used to mean “to strike” rather than being anything to do with actual fucking. The more common Middle English word for sex was swive, which has developed nicely into the Modern English word swivel, as in: go swivel on it. Some of the earliest instances of fuck then, turn out to mean “hitting” or “striking,” such as Simon Fuckebotere (recorded in 1290), who was disappointingly probably in the milk industry, hitting butter rather than doing anything else with it, or Henry Fuckebeggar (1286/7) who may have, unfortunately, hit the poor.

Article by Kate Wiles called “Swearing: The Fascinating History of Our Favorite Four-Letter Words” for the New Republic, originally published in the New Statesman. Source

Of course, Florio’s reference places the word “f**k” in Shakespeare’s lifetime, but it doesn’t explain the use of the word as an expletive. If you’re wondering where I’m going with this, an example might be how the word “rape” isn’t an expletive. We use the word, it means something bad, but the word itself isn’t an obscenity.

I’m curious whether the word “f**k” was an obscenity, specifically, during the late 1550s when Episode one uses it so prolifically. I can’t explain why I fixated here. Maybe I’m just still in shock, because seriously–it’s s ton of times.

I am citing my sources here, but don’t at me too furiously for not using academic articles, I am searching randomly online doing loosely investigative research while drinking wine and watching tv, ok? ok.

In all seriousness, though, if you or someone you know has an academic article that looks into the history of f**k, please share it with me! I genuinely want to know the answer here

There’s a good amount of history/information around the word fuck in this article by Matt McMann, but I cannot find any sources that indicate the curse word was used in the flippant, strictly expletive/emphasis form it gets used in the show.

According to lexicographer and linguist Jesse Sheidlower in his book The F-Word (1995), who is quoted in this article, the f-word wasn’t widely used as expletive in the way it’s applied in the show Becoming Elizabeth, until well into the 19th century. So the prolific use of it here in this show is likely a historical inaccuracy included for, quite successfully, shock value.

After I wrote this article, I posted on Twitter to share my questions/research into this word and there are some resources you should consider. You can see the Twitter exchange here, and I’ll post some screen captures of it here as well. After the screen captures, be sure to check out my list of some blogs/researchers I discovered that have written extensively on this topic.

So there you have it, the word “f**k” was not used in the 1550s as an expletive, and certainly not used by a young Edward VI so forcefully as he does in the series.

Aside from the (wholly unnecessary and way too long) sex scenes and Thomas Seymour appearing to be a pedophile, the show is interesting.

I ended up looking up the history there about what happens to him, but I don’t want to spoil it for you.

Come watch with me (and tweet me!) for episode 2 that airs on June 19 on Starz.