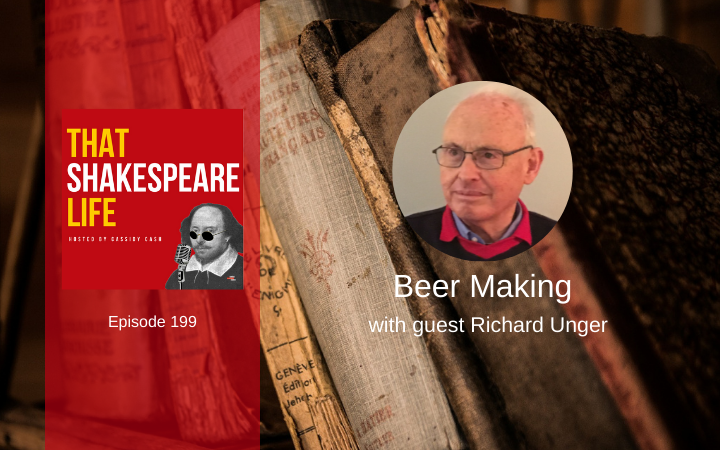 Welcome to Episode 199 of That Shakespeare Life, the podcast that goes behind the curtain and into the real life and history of William Shakespeare by interviewing the experts who know him best.

Find video versions of our show including archival images and other visual content we are not able to share in the audio of our podcast streaming right now along with documentaries, animated plays, and virtual tours inside the digital streaming app for That Shakespeare Life.

Shakespeare references “beer” in his works 6 times, drawing attention to specific kinds of beer like “small beer” “double beer” and even one reference in Hamlet to beer barrels where the Prince of Denmark suggests that beer barrels had a stopper to keep them sealed. Drinking beer in Shakespeare’s lifetime was almost as regular as drinking water is today. So whenever you were thirsty, drinks like ale, beer, and spirits were popular choices. This beer drinking reality means that there was a strong economy for beer making and distilling in Elizabethan England, including unique storage methods, containers, and even some versions of beer like small and double beer that are obsolete today. To find out exactly what the state, varieties, and industry was behind beer for Shakespeare, we have invited our guest this week, Richard Unger, expert in the beer making of Elizabethan England, and author of the book “Beer in the Middle Ages and the Renaissance” to help us explore the history of how beer was made for the life of William Shakespeare.Join the conversation below.

If you like our show, consider becoming a patron. Just like Shakespeare, our art depends on support from listeners like you. To say thank you for your contribution, we save exclusive content (like video versions of our show), behind the scenes looks into the studio, and patrons-only benefits just for you.
Explore all the benefits and sign up today.

Richard W. Unger was trained as an economic historian (Yale, 1971). He is now professor emeritus in the history department of the University of British Columbia where he taught for four decades. He has published extensively on the history of medieval and early modern shipbuilding and shipping, on the history of Renaissance cartography, energy consumption in Canada in the last two centuries and on medieval and Renaissance brewing in Europe and especially in the Netherlands and England. For example among other publications are, Beer in the Middle Ages and the Renaissance, Philadelphia: University of Pennsylvania Press, 2004 (paperback edition 2007), and expected this year, “Beer and Taxes: the fiscal significance for Holland and England in the seventeenth and eighteenth centuries,” TSEG – The Low Countries Journal of Social and Economic History.

In this episode, I’ll be asking Richard Unger about :