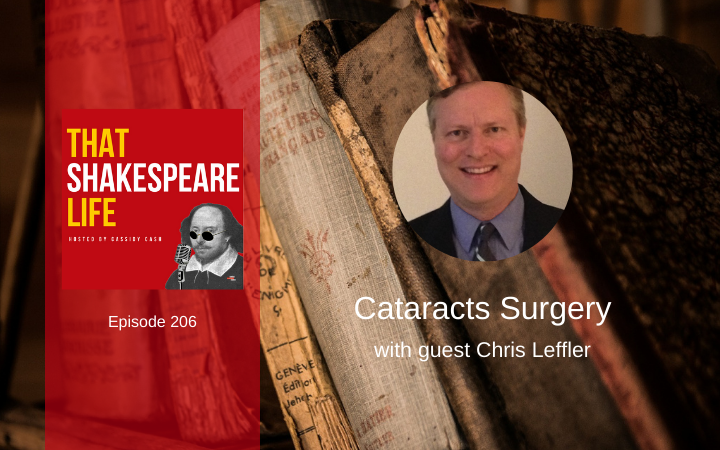 This post contains affiliate links. Just like Shakespeare, our show is supported by listeners like you who become our patrons. If you enjoy the history we bring you each week, consider becoming a patron for access to bonus episodes and exclusive content.

Welcome to Episode 206 of That Shakespeare Life, the podcast that takes you behind the curtain and into the real life and history of William Shakespeare.

In a 16th century painting by Casper Stromayr, two men, presumably doctors, are standing behind a table on which a set of surgical instruments are laid out very neatly. In the notes for the painting we discover that some of the instruments are specifically for surgery of the eye.

Cataract surgery like the one being prepared for in this painting was just becoming widespread in Shakespeare’s lifetime and was performed to remove the pearly film that developed over the surface of the eye.

In Shakespeare’s The Tempest, Ferdinand uses the phrase “Those are pearls that were his eyes:” Again in Rape of Lucrece, Shakespeare calls attention to pearly eyes when he writes “His eye drops fire, no water thence proceeds; Those round clear pearls of his…”

Additionally, in both King Lear and Shakespeare’s Henry VI Part II, there are references in the dialogue to specific procedures and even specific diseases of the eye. The novelty of this new surgery, combined with the very public and performative nature of the procedure itself– often being performed in the street on public display– it’s plausible to think William Shakespeare may have been studying up on this new science. Based on the parallels found in Shakespeares plays, some scholars even suggest that William Shakespeare may have read Charles Estienne’s Defence of Contraries, translated from French to English in 1593, or Thomas Cooper’s 1578 medical dictionary that defines “cataractia” as “a disease of the eyes, when a tough humour like a gelly droppeth out.”

To help us explore the history of cataract surgery as well as the references to the procedure and eye disease we see in Shakespeare’s plays is our guest and professional ophthalmologist, Dr. Chris Lefflfer.

This week, I’ll be asking Chris Leffler about:

Articles Chris has written on cataract surgery and shares these links to his work:

Author Sara Read has been a guest on That Shakespeare Life to talk about John Hall, Shakespeare’s Son in Law that was himself a medical professional. Explore that episode here.

The history of cataract surgery, Annals of Translational Medicine: https://atm.amegroups.com/article/view/54993/html

You cataracts and hurricanoes (sic), spout

Cataracts Surgery was performed by a specialist

It was generally doctors or eye specialists that performed cataract surgery in the 16th century. The diagnosis of cataracts was a rougher business than today, because as Chris points out, doctors did not have all the modern equipment we have today.

“[The primary symptom was] not being able to see is the worst symptom. You can see light/dark but not much else. Mild cataracts did have other symptoms, like seeing flies (things swirling around) and in fact that’s not considered cataract today, but they didn’t have really good tools for examining the eye and didn’t have the ability to distinguish between various eye diseases like we can today.”

During Shakespeare’s lifetime, cataracts surgery was not known as cataracts. That term would arrive in English later. During the 1580s, a new English term for this surgery developed called “Couching.” Chris explains that the term is thought to have derived from

“…[the] French [term], coucher, to lay down. In the 1500s, around the time of Shakespeare, people began to use the English term “couch” to describe the surgery that had been around since antiquity–using a rod to push the opaque lens out of the field of view so they could see.”

The procedure, as well as the field of ophthalmology, was just getting its’ feet under it in the 16th century. The specialist title of ophthalmologist didn’t exist yet. Instead, there were a variety of professionals who could perform this procedure. Chris explains,

“[It] wasn’t always an eye specialist, but it could have been. Occulists. They were people who English language around 1580s is when this term arrives and when doctors start specializing in eyes. Other times it was a general surgeon who could perform this.”

“Those are pearls that were his eyes…”

Cataracts patients can be visually blind, and sometimes having this surgery done was seen as a cure for blindness. Chris explains that the procedure itself was in an infancy that translated to a great deal of failure more often than success, but that there were several instances where people’s sight was restored:

Surgery could fail alot, particularly from infections (sterility not observed as closely as we do today). Retinal detachment could also occur, and there were definitely people who had the surgery done successfully and were cured of blindness. It was a primitive type of surgery, and you would wait until the cataract was very severe, but yes there were instances in the early 1600s in England and even at the end of the 1500s, where people did have their sight restored.

The instruments used to perform cataracts surgery were quite different than what we have today. Chris explains that the severity of cataracts being operated upon was often much more advanced than the point at which modern surgeons would recommend the procedure. Additionally, this surgery was done prior to anesthetic, so the operation was quite different than today. In England, in particular, they weren’t using the same approach to cataracts as other countries:

“In antiquity, it was a needle or a rod that was used. It was a single instrument used to penetrate the white part of the eye and push the lens out of the way. They didn’t use an eyelid speculum to hold the eyelids open and sometimes you would have to pus the lens down repeatedly, otherwise you would hold it down quite a while to try and keep it out of the visual axis. In the medieval arabis period there were some eye surgeons who used a lancet to make an incision in the white part of the eye then use a separate rod to pus the lens you to that way, [this approach to the cataracts] surgery moved into India but it wasn’t common in Europe and definitely not in England…”

His eye drops fire, no water thence proceeds; Those round clear pearls of his…”

Many times the procedure of cataracts surgery was a public affair, often being performed in a chair on a pedestal or otherwise constructed stage. (I’ve often wondered if there’s an association with this practice and the development of the phrase “operating theater” that we have today). Chris explains,

There were a variety of different ways this could happen. Some itinerant practitioners, some performed it on a stage. Trapeze artists and rope walkers and play music, gambling and [had a] medical booth part of a city fair, and other people would go to patients homes or the patient would go to the doctor’s homes. You don’t hear of it happening in hospitals in the 1600s, it wasn’t until the 18th century that you see it happen in hospitals.

The process of undergoing the cataracts surgery was quite severe. While it’s paramount to emphasize the lack of anesthesia while your eyes are being cut upon, that’s only where the harshness begins. Chris explains that the patient was often physically restrained and held down for the procedure, often undergoing a lengthy rest period afterwards to recover.

The person was sitting on the ground, and perhaps on a pillow, the chairs didn’t have arms but they had a back. There would be an attendant behind the patient holding their head still, and there was no anesthesia,) they didn’t’ have it, after the procedure they’d have to lay down for 9 days with a dressing on the eyes of linen and egg white, changed every few day[s]…

“If thou hadst been born blind, thou mightest as well have known all our names as thus to name the several colours we do wear. Sight may distinguish of colours, but suddenly to nominate them all, it is impossible.”

In Shakespeare’s Henry VI (Part II, Act II, Scene I), the Duke of Gloucester says: “If thou hadst been born blind, thou mightest as well have known all our names as thus to name the several colours we do wear. Sight may distinguish of colours, but suddenly to nominate them all, it is impossible.” Chris, explains that this line is based on a real story from Shakespeare’s history:

“[In a work] published by Thomas Moore in 1529, refers to a story that’s supposedly took place in the 1400s when a beggar said that he was miraculously cured of blindness. The Duke of Gloucester aid that it would be impossible for him to name the colors, having never seen them to learn their names. He had him set in the stocks as punishment. There is a historical origin to the story and when Shakespeare wrote that play 1590-1592, cataract surgery was not really known in England and was considered a miracle to improve the vision in children who had been born blind or in adults who had been born blind …”

“Tis not your inky brows, your black silk hair,

Your bugle eyeballs, nor your cheek of cream,

That can entame my spirits to your worship.”

Images (From bottom right back up to top left):