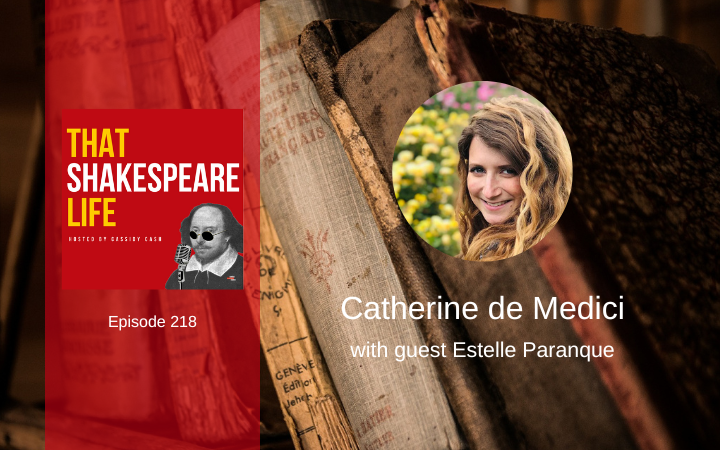 Welcome to Episode 218 of That Shakespeare Life, the podcast that goes behind the curtain and into the real life and history of William Shakespeare.

Married to Henry Valois, Catherine de Medici held considerable power and influence over the Valois Dynasty of France and was beloved of the Medici Dynasty in Italy. The year William Shakespeare was born, in 1564, Catherine de Medici offered her son, Charles IX, as a husband for Elizabeth I, and would go on to offer her other two sons, Francis and Henry, to Elizabeth I as well in a decades long effort to secure a political alliance through marriage with England. Staunchly opposed to marriage on the whole, Elizabeth I never did accept Catherine’s sons as husbands, but the interactions and rivalry between these two powerful women was a mainstay over England for the formative years in Shakespeare’s lifetime. Here today to help us explore the life of Catherine de Medici is our guest, historian, and author of the her latest book about Catherine de Medici called Blood, Fire, and Gold: The Story of Elizabeth I of England and Catherine de Medici , Dr. Estelle Paranque.

Estelle has always had a passion for history and particularly for queens and diplomacy.

She was elected a Fellow of the Royal Historical Society and she is a Fellow of the Higher Education Academy. She is also a co-convenor of the Tudor and Stuart Seminar at the Institute of Historical Research in London. She has been teaching at university level for the last nine years and is dedicated to share her passion for history with the next generation.

Her research interests are royal and diplomatic studies. She works on Anglo-French relations during Elizabeth's reign and on monarchical representations during the early modern period.

She also works on Catherine de Medici and the Valois kings and their consorts.

She is also very interested in public engagement and has participated in the popular historical documentary Secrets d'Histoire on France 2, BBC Radio 4, and numerous podcasts (BBC History, Viral History, Hidden Stories with Helen Carr for HistoryHit).

She is represented by Rachel Conway at Georgina Capel Associates. For any queries, please contact her agent directly.

I'll be asking Estelle Paranque about:

Author Carol Levine is a guest of That Shakespeare Life. Listen to her episode here.

This post expands! There's more details inside including maps of the 16-17th century England, portraits of Elizabeth I and more. Become a patron to unlock these bonuses. Here's what's inside this week: