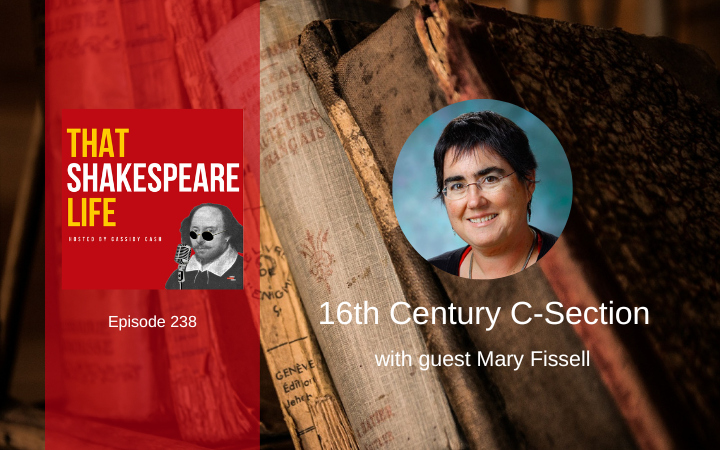 Famously in Shakespeare’s play, Macbeth, the title character becomes convinced he cannot be killed because the witches tell him he cannot be killed a man “of a woman born.” It is only when it is too late that Macbeth learns his nemesis, Macduff, was “from his mother’s womb untimely ripped”, in reference to a cesarean surgery, that Macbeth learns of his ultimate fate. Shakespeare’s inclusion of cesarean section in his play comes at a time when medical science and religious doctrine were questioning the viability of this procedure in a heated public debate. In 1581, French surgeon Francois Roussett published “The Hysterotomotokie or Caesarian Birth” which argued women should have cesarean as a viable option for birth during difficult deliveries. His publication caused quite a stir in medical society, with surgeons across Europe speaking out publicly to condemn the very suggestion. The heated conversation traveled all the way to England where a man contemporary to William Shakespeare, named Simon Forman, would write about cesarean sections in his publication “Matrix and the Pain Thereof.” True to form, it seems William Shakespeare’s play, Macbeth, was full of poignant and extremely timely cultural references to a huge political debate that was happening right when the play was written. Here today to help us understand the history of cesarean sections during Shakespeare’s lifetime and exactly how controversial it might have been to include cesarean sections in his play, is our guest, professor of the history of medicine and author of “Women, Health, and Healing in Early Modern Europe”, Mary Fissel.

Mary E. Fissell is professor of the History of Medicine at Johns Hopkins University. Her work focuses on how ordinary people in early modern England understood health, healing, and the natural world. Her introduction for the Bulletin of the History of Medicine explores Women, Health, and Healing in Early Modern Europe. Her publication, Vernacular Bodies, explored how everyday ideas about making babies mediated large scale social changes. Connect with Dr. Fissell and explore her research here.

I’ll be asking Mary Fissell about:

“yf it chāse that the woman in her labor dye / & the chyld hauyng lyfe in it / thē shall it be mete to kepe open the womās mouth / and also the nether places / so that the chylde maye by that meanes bothe receaue & also expell ayre & brethe which otherwyse myght be stopped / and thē to turne her on the left syde / & there to cutte her open / & so to take out the chylde / & they that are borne after this fashion be called cesares / for because they be cut out of theyr mothers belly / whervpon also the noble Romane cesar the .j. of that name ī Rome toke his name.”  p. liii.

Cesarean Section was Thought to be Named After Julius Caesar

The surgery that brought babies into the world by taking them from their mother’s uterus via an incision was thought to have been named after Julius Caesar. Later scholars would demonstrate that linguistically, that’s unlikely to be the origin of the word itself, but there are many tales (right up to the 19th century) that suggest Julius Caesar would have been the first baby born by c-section. For Shakespeare’s lifetime, that perspective was the widely held belief of society and definitely influenced the understanding and use of cesarean section in the story of Macbeth.

In fact, c-section has a long history, being present in ancient texts including Greek mythology that tells of Apollo removing Asclepius from his mother’s womb. Other ancient cultures including Hindu, Egyptian, Greek, Roman, and other European folklore have references to this particular surgery. There are even ancient Chinese records that suggest that in China, the surgery was performed on a living woman, which was not the general approach to c-section until well after Shakespeare’s lifetime for much of the Western world.

For more resources on the history of c-section surgery, including more portraits and woodcuts from the Medieval period and Shakespeare’s lifetime, check out the Complete Lesson Pack on Macbeth and cesarean section when you become a member.

For much of the Western world during Shakespeare’s lifetime and before, it was unheard of to perform a c-section on a woman who was alive. There was really no expectation that the woman would live and the surgery, indeed, was not performed to try and save their lives. Instead, the focus of a c-section surgery was to allow the baby to be baptized before it died in order to protect it’s eternal soul from damnation. It was during Shakespeare’s lifetime that Western physicians began to debate the viability of a woman’s life and that of her unborn child with the performance of a cesarean. Mary explains,

[In the] Middle Ages [we see physicians providing instructions for when the] birth mother is dead, [there are detailed] instructions on how to remove baby, with specific directions. The purpose was to baptize the infant. They weren’t expecting it to live (sometimes the baby did); (Midiwfery book translated from 1513 German; English 1540 edition, matter of factly states directions). From the 1580s onward, thanks to [the physician] Francois Rousset, we start to see survival of mother and baby as the goal.

Take this week’s episode into your classroom with our Complete Lesson Pack. Inside you’ll find copies of Francois Rousset’s writings about C-Sections from the 1580s along with paper and research prompts that coordinate with this week’s episode (& with Shakespeare’s Macbeth) Learn more about Membership here.

Cesarean was performed by a Surgeon

During childbirth, women were attended only by women. If there was a man in the room, that man was the attending physician, but even his assistants would have been women. Mary shares that there would not, “have been a man in the room unless it was a serious situation. Surgeon would have been called in. Surgeons didn’t open the body cavity the way we think today. They were doing smaller surgeries, but they did have scalpels. They would have done the c-sections.”

We do not know the rate of survival among women who had this surgery performed at their child’s birth, but we do know it was much more common procedure than we might have expected. Surgeons were performing these procedures, and there are manuals outlining the tools and methods for performing them successfully.

“…[one key tool] is a suturing needle, because once the uterus has been cut open, they have to close the woman back up quickly. It’s complicated, but according to Rousset, some women did survive this. There’s one case [still] argued about today. If a woman had a cesarean section and had another pregnancy, would she have to have another c-section or would she have to have vaginally.’

Medical minds in Shakespeare’s lifetime were debating the same issues about cesarean section as what is debated among medical doctors today.

Inside the Complete Lesson Pack that coordinates with this episode, we have found a 14th century woodcut showing Cesarean section performed on a living woman by a female practitioner. See that and other bonus history content related to Caesarean section when you become a member.

One famous story about Caesarean that Shakespeare would have been familiar with is that of Jane Seymour.

For 16-17th C there were several stories about Jane Seymour circulating saying she died from a c-section. We know she died in 1537 after birth of Edward, and after her death, ambassadors starting writing back about Henry VIII ordering a c-section and the story goes both ways that either he wanted to save her or that he wanted to save the baby. Series of ambassador letters fuel this debate, and then some people point to her epitaph, uses the figure of the phoenix and some have suggested this alludes to her losing her life by a c-section giving birth to the heir. There’s also a late 16th C ballad about this (more than one), in the 17th century antiquarians also talk about this story (William Camden), what’s notable, is that this was a story alive and well in Shakespeare’s lifetime and they would have known this concept of c-section as a procedure that could happen…