Clocks in the 16th Century with William Massena (Ep 69) 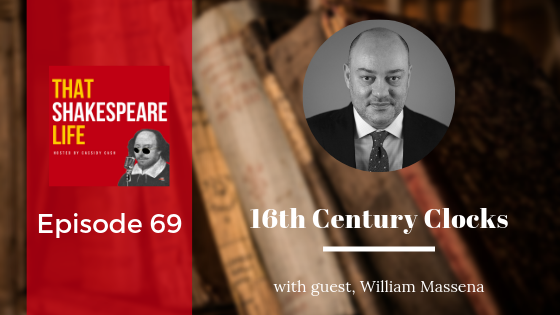 Welcome to Episode #69 of That Shakespeare Life, the podcast that takes you behind the curtain and into the life of William Shakespeare.

One of my absolute favorite quotes from Shakespeare comes from Henry IV Part 1 (I.2) when Henry V says

Unless hours were cups of sack and minutes

capons and clocks the tongues of bawds and dials the

signs of leaping-houses and the blessed sun himself

a fair hot wench in flame-coloured taffeta, I see no

reason why thou shouldst be so superfluous to demand

the time of the day.

It’s hilarious today, particularly to consider Falstaff parading around in flame colored taffeta, but the history buried in the hilarity is the question of time. Obviously, Henry V seems to think asking about the time of day is superfluous. In a 21st century world where things arrive on time, and we keep our time in our pockets or on our wrists, what was William Shakespeare’s understanding of keeping of time? It is William Shakespeare who is credited with being the first to pen the phrase “watch the clock”, but did he have a clock?

Here to take us back to the world of sundials, hourglasses, pocket watches, and clock towers all of which were in motion and taking part in a flourish of clockmaking that took off in Europe in the 15th and 16th century is our very special guest, William Massena.

William Massena is the Founder and CEO of Massena LAB, a collaboration with independent watchmakers to make unique timepieces. He is the Managing Director of TimeZone.com, the world’s largest watch discussion forum on the Internet. William, who has been with TimeZone.com since its founding in 1995, has been a passionate collector of watches from an early age and an active participant in the world of horology as a collector, consultant and auctioneer. Previously, he was the Chief Operating Officer and Managing Director of Antiquorum SA, a leading Horological Auction House. William Massena holds a BS and master’s degree from New York University Stern School of Business. He is a jury member of the GPHG since 2013, a member of the cultural council of the Foundation of Haute Horology and a Freeman of the Worshipful Company of Clockmakers. In addition, William Massena is a Trustee of the Horological Society of New York.

In this episode, I’ll be asking William about :

William highly recommends (and so do I!) this article by Tiffany Stern on Clocks and Shakespeare.

That's a free article, you click it to open a pdf. It's not an affiliate or anything just free knowledge of which I hope you'll take full advantage. William also recommends Marcel Proust's In Search of Lost Time. It is available in several versions and editions, so I have listed three here I think you will enjoy.

For daily discussions on all things history and especially Shakespeare history, follow me on Twitter. Famously #Twitterstorians are a fantastic group and it's fun to hang out there.

Become a Patron for $5/month to access to these and all of the detailed show notes for over 200 episodes of That Shakespeare Life PLUS all the other benefits of supporting our show. If you're already a patron, click “read more” to open the notes right now, or if you're not already signed up with us then clicking the read more link will direct you to where you can join.

Ten o'clock: within these three hours 'twill be time enough to go home.

The hour glass was one way to measure time during Shakespeare's lifetime, and the most likely to have been used in a theater. The hourglass functioned by dropping sand from one glass bulb int another, with the rate of sand passing through the bulbs measuring out the equivalent (or thereabouts) of one hour.

Preceded in design by water clocks,which had been popular in monasteries to mark the passage of time (in case you are wondering how monks knew when to ring the bells for prayers), the hour glass quickly out paced it's predecessor due to it's resitance to moisture. Where the water clock was prone to problems with condensation, the hour glass did not have this issue and thus became popular on board ships for measuring time at sea.

Hourglasses were often used in theaters to measure the length of a play, and you can see Shakespeare refer to this practice in the play Pericles, when the narrator says ‘our sands are almost run’ (V.2.) He is referring to the end of the play being close at hand since the sand is almost gone from the hourglass.

Clocks in general for Shakespeare’s time period were flourishing, with many people making them, imports of them coming from all over Europe to England at this time, but overall they were very inefficient, meaning that clocks were not accurate at all for keeping the precise time.

As William shares with us this week, mechanical clocks were flourishing throughout Europe,with the first real “clock” like we think of today being invented around the 14th century in Europe.

These new devices were popular and soon spread from Italy, France, and Germany into England were the 15th century saw a boom in the creation, demand, and design of mechanical time keeping devices applied to a variety of uses from cooking to jewelry.

Sundials were a popular feature for 16th century Tudor Knot gardens,but it turns out these features were more than just a throwback to Greek culture (as were many of the themes of a Tudor Knot Garden). For people like William Shakespeare, the sun dial was a functional piece of decoration used to mark the hours during the daylight hours. The sun dial works by casting a shadow to mark the hour as the day passes, so by placing this decoration in the garden, the owners of the property could tell what hour of the day it was by simply looking outside. These large sundials weren't the only application of this time telling technology, however. In the year 1600 (at the very least, since this is the date given to an object owned by Shakespeare Birthplace Trust), there were also pocket sundials, known as a ring dial.

Made from brass, the dial is engraved inside with the hours of the day and outside with the initials of the months. A pierced sliding ring runs around the middle, and in order to tell the time the hole in this sliding band would be lined up with the month on the outside of the dial. When held up to the light, the sun would shine through this hole and onto the correct hour engraved on the inside, thus giving a (fairly) accurate indication of the time. Source

William Shakespeare was at least familiar with the pocket sun dial, or ring dial, since he gives reference to it in his play, As You Like It:

Obviously, for Shakespeare,the idea of marking the time as well as being able to tell time from a watch you kept in your pocket was a matter of both practical, as well as moral, significance.

Originally, the word “clock” meant “bell” because the churches in a town would ring their bells to mark the time for prayer throughout the day. Townspeople came to use the bells as a marker for various points during the day and to orient themselves as to where in the day they were timewise.

As these church bells could be heard from very far away, many people used the church bells to orchestrate meetings and to make their arrangements. For example, you might arrange to meet your friend for lunch after the third chiming of the bells.

Of course, if your friend was coming to meet you from a different town, where the church bells were perhaps not on the same rotation as your town’s bells, then you would set your meeting by announcing the town whose bells from which you would be measuring.

You can see an example of this tactic for keeping time in Shakespeare’s Henry IV when Falstaff says that he fought a “long hour by Shrewsbury clock” Act 5 Scene 4. He was, of course, tired and stressed out from the events going on in that scene, but the reference to the “long hour” is also a double meaning on the idea that clocks were notoriously slow, producing a “long hour”

Churches did not have the monopoly on clocks,however, and many market towns, town halls, and other civic buildings would feature clocks as well.

Fractional Hours Were For Fairies

During Shakespeare's lifetime, all of the available clocks, whether it was hour glasses, the sundial, or mechanical clocks all marked simply the hours. When they were using the town clocks to try and tell which hour of the day it was, they would call out the tones of the bells out loud, thus “telling the time.” as they verbally counted the chimes.

Fractional hours like half hours and quarter hours existed, but were largely estimates.The concept of minutes would not exist until the 18th century, and in fact, for William Shakespeare, the concept of being able to mark the minutes of an hour was considered impossible–something for the fairies.

As Tiffany Stern points out in her paper, Time for Shakespeare: Hourglasses, sundials, clocks, and early modern theatre,

Only once does Shakespeare write about a period of time made up of accumulated minutes. Puck in A Midsummer Night’s Dream claims that he will ‘put a girdle about the earth in forty minutes’ (TLN 552–3). The joke here is that forty minutes is an unmeasurable amount of time. Only a fairy could use it. Source