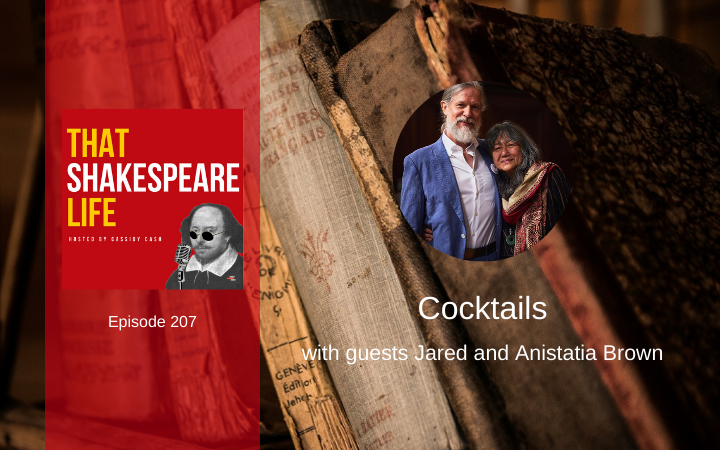 Welcome to Ep 207 of That Shakespeare Life, the podcast that goes behind the curtain and into the real life and history of William Shakespeare by interviewing the experts who know him best.

Cocktails were popular in Shakespeare’s lifetime. Shakespeare’s plays mention several kinds of alcoholic drinks, some of which we still have today like wine, ale, and beer, but others are more firmly situated in the past, making them pretty obscure references outside of niche historical circles that enjoy recreating beverages from antiquity. For example, The Merry Wives of Windsor, Henry VI, and Twelfth Night give us mentions of cocktails like sack, posset, canary, and metheglin, all of which are alcoholic drinks but their substance may not be as recognizable today as it was for Shakespeare. What were these drinks made from, were they served at pubs or around the family diner table, and what did they look like?

Our guests this week, Jared and Anistatia Brown are experts in historical beverages and the owners at sipsmith.com where they research and write about the history of alcoholic drinks. Today, they are taking us back to the 16th century to investigate these obscure drinks and introduce us to the cocktails of Shakespeare’s lifetime.

Recipients of the 2021 Helen David Life Achievement Award from Tales of the Cocktail, industry legends Anistatia Miller and Jared Brown are multi-award winning drinks historians who have been writing about the drinks industry since 1995. Jared Brown, MA, co-founder and master distiller of Sipsmith Limited, has a few dozen books under his belt and a few hundred articles about drinks, spirits, and how to make them. After 35 years in the publishing industry, Anistatia Miller, MA, MSc (Ox), director of Mixellany Limited, is finishing her PhD in History on the economic and social history of early modern English brewing and teaches early modern European history at the University of Bristol.

This week, I’ll be asking Jared and Anistatia Brown about:

Books and Resources Jared and Anistatia Recommend you use to learn more:

Cassidy’s Note: The first two books listed above (starting from top Left) contain information on historical cocktails and were recommended on the episode today by our guests. The rest of the books are written by Jared Brown and Anistatia Miller. I listed them here because they contain relevant and interesting information on cocktails throughout history. The Mixellany & Spirituous Journey will contain the most cocktail information about Shakespeare’s time period, specifically, but the others were too delightful not to include here for your reference.

The earliest record of whiskey on paper happens in 1494 with a reference to aqua vitae in the Exchequer Rolls, but there was a great interest–and a good deal of illicit smuggling of Scotch whiskey– happening not just in Shakespeare’s lifetime, but under the title “aqua vitae” (which is used no less than 6 times in Shakespeare’s plays), the beverage was also hugely popular for centuries prior to Shakespeare’s life in the Catholic Church as a kind of holy water.

As Jared and Anistatia explain, this drink was often made with herbs and spices, and was the Whiskey of Shakespeare’s lifetime:

“Literally translated means water of life…[it was made with] Grain or wine spirits with anise…Carraway or coriander,Clove nutmeg ginger, cardamom, and ginger…”

“Yet be cheerful, knight: thou shalt eat a posset to-night at my house…”

In Merry Wives of Windsor, the Page says “Yet be cheerful, knight: thou shalt eat a posset to-night at my house” (V.5). If you’re not British, where posset is still served today as a modern dessert, you may not recognize the appeal of being invited to have posset. Jared explains that posset could be both a drink as well as a dessert, and was not all together different from the American Egg Nog.

“[Posset was a drink made with ale and sack wine, elegant made with cream, sack (Sherry)…”

They explain that the posset could be served as a drink or as a pudding, but that the ingredients were the same with either preparation. Being able to be served as both is put down to the preparation:

Eating a posset was because it was easy to curdle milk with sherry, so making it especially if heading it with a poker from the fire, and before microwaves the loggerhead or poker would heat it up. Plunge the poker to the bottom of the cup and the liquid expands so fast, it leaves the cup.

While modern posset can be prepared using stoves, microwaves, or other heating technology, in the 16th century and for Shakespeare’s lifetime, you could actually use a hot poker that had been resting in the fire to make the drink curdle up from milk into the posset form, but as Jared points out, you had to be careful lest you make a huge mess:

Make a proper posset as a drink you take the poker and hold the tip and slowly submerge it on five count. If you do this too fast, the cream will fly out of the glass and into your face.

While egg nog is served traditionally at Christmastime, the similarities with Posset end at the basis of cream. Posset was a popular beverage throughout the year in England, due primarily to the generally cold climate on the British Isles. Jared explains:

Generally an ale and milk mix, but it was more of a winter drink. It was an autumn/winter/spring thing in England, where it gets cold.

“Nay then, two treys, and if you grow so nice, Metheglin, wort, and malmsey”

In Love’s Labour’s Lost, Biron mentions “Nay then, two treys, and if you grow so nice, Metheglin, wort, and malmsey: well, run dice!” This drink is very similar to mead, based in honey, and Jared and Anistatia explain that there were multiple kinds:

Two kinds of metheglin– first was like a mead, it was a fermented honey drink that used leftover foam from fermenting ale, contains all the yeasty good stuff that makes things ferment. Still done today to make cachaça, a drink of Brazil, and several other traditional fermentations.

Second version came along in the later 1500s and distilled this after it was fermented, and there were professional metheglin distillers in the late 1500s, but the fun pat of the drink was that once you got this fermented, you added ginger, sometimes nutmeg cinnamon or orange peel to spice it up. If you wanted it to be clarified (and not cloudy from the contents) you could add egg whites and egg shells to siphon it off, but that’s only if you weren’t patient enough to wait on it to settle in storage.

“Now is Mortimer lord of this city. And here, sitting upon London-stone, I charge and command that, of the city’s cost, the pissing-conduit run nothing but claret wine this first year of our reign….”

In the above letter, dated 1580, Richard Broughton (Richard Bagot’s son-in-law), Inner Temple, writes to Richard Bagot and requests, among other things, a hogshead of claret for his mother in law. This reference was found at the Folger Shakespeare Library collections using Hamnet. Click the above links or go to the source directly here to see the record on the Folger’s website for yourself.

In Henry VI, Part 2, the rebel leader Cade orders that the sewers of London should “run nothing but claret wine the first year of our reign”. Jared and Anastatia explain that the claret was significant due to the source of the wine.

Claret is the British term for red Bordeaux wine–all Bordeaux, all French wines, and they can be Rhone Chateau Neuf, they call all of it Claret. The one thing that’s fascinating about the passage is that the original text uses pissing conduit, or latrine, not sewers, and he wanted claret to run through there because yes, its going to run with claret, but we are going to pass it through our kidneys first. Henry VI crown King of England 1429, King of France in 1431, he had the rights to all the claret he could ever have and bring it into England, so he wanted to prove how much he was French and English King.

“Now is the woodcock near the gin.”

When Shakespeare uses the word “gin” in his plays, he’s not talking about the drink we use to make gin and tonic today. Instead, the word “gin” refers to a trap that was used to catch and contain roosters. Thus, the reference above from Twelfth Night is about Malvolio getting caught in a trap. Gin, as a drink, didn’t precisely exist in Shakespeare’s lifetime, at least not anywhere near where Shakespeare would have had it in England.

There was a wide variety of cocktails made and consumed in Shakespeare’s lifetime, but it seems the bard would have missed out on the popular (and at least to me, associated with England), drink called Gin.

By the 16th century, the Dutch had begun creating a beverage called “Genever” that some researchers think is a precursor to the modern gin. However, it wasn’t until the 1700s that Gin made it’s way to England.

As Jared and Anistatia explain in this episode, however, despite not having the official beverage of Gin the way we know it today, there was a drink very similar that might even be called “Shakespeare’s Gin,” but this concotion was not recreationally available, but instead was a medicine.

He would have had something like gin… In Shakespeare’s time, elite women who were the doctors for a local village, owned a still, acquainted with monks, learned distillation, apothecaries were also making spirits (there weren’t distillers), and what they would make, as close to gin as we know is aqua rosa solis, and aqua fruitum (closest to London Dry Gin, backed up with Spanish orange and lemon peel, practically a modern gin recipe, but from the 1600s). It wasn’t a drink, it was used medicinally. Elizabeth I and Henry VIII drank it medicinally and introduce dit to court as a recreational drink.