Conrad Gessner and his animals with Dan Hooley (Ep 221) 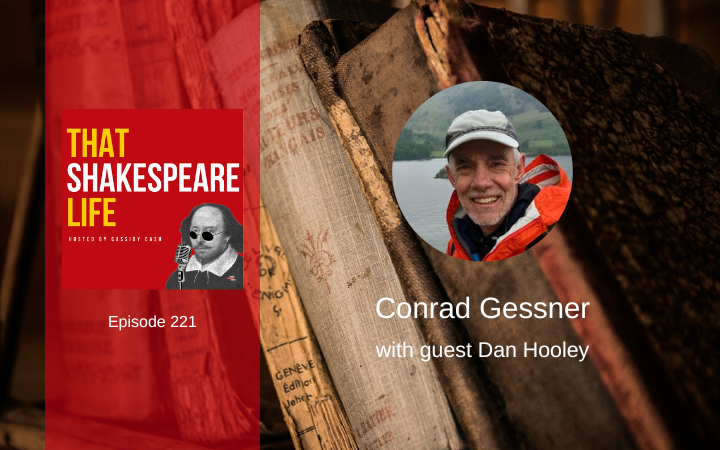 Welcome to Episode 221 of That Shakespeare Life, the podcast that goes behind the curtain and into the real life and history of William Shakespeare.

The true example of a Renaissance Man, or a person who is great with many talents or areas of knowledge, Conrad Gessner joins the ranks of herbalists like William Turner and John Gerard as not only influences on Shakespeare, but examples of the influence of Renaissance thought on life in Elizabethan England. Gessner’s works were printed prolifically and consumed regularly in England, most likely by Shakespeare himself. Having completed over 70 publications in his lifetime, Conrad Gessner is a powerhouse of information and his surviving works provide vital links to the mindset and understanding of the world from the Renaissance. Here today to share with us what Conrad Gessner was like, the works he completed, and exactly how it is we are supposed to spell his name, is our guest Dan Hooley.

Dan Hooley is Professor Emeritus of Classics at the University of Missouri. He’s written fairly extensively on Roman poetry and Classical reception in England and early modern Europe. He has also written about mountains and climbing in the ancient world and later, and his interest in the Swiss polymath Conrad Gessner was prompted by Gessner’s “mountain epistles,” early forays into the aesthetics of mountainscapes.

I'll be asking Dan Hooley about:

Note from Cassidy: This list of resources is provided by the guest for this episode so that you can have a reliable list of places to begin if you want to study this subject further. Where available, I have included affiliate links. In the absence of amazon links, the books are linked to other places online where the book can be found. You may also copy/paste to do your own searching of these titles. (Or show the title to your librarian, they'll help you find it.)

Wellisch, Hans (1975). “Conrad Gessner: a bio-bibliography,” Journal of the Society for Bibliography and Natural History 7: 151-247

The title that was dedicated to Elizabeth I was called Icones Animalium (1553). It was a originally intended to be dedicated to Henry Gray, Duke of Suffolk, who died before publication to the dedication went to Eliz. 1. You might try the for the title page: https://library.si.edu/digital-library/book/iconesanimaliumq00gess

Other things Dan mentions in this episode:

Sachiko Kusukawa, “The Sources of Gessner’s Pictures for the Historia Animalium,” Annals of Science 67.3, 303-28.

Find Dr. Kusukawa's faculty page here, that's where I found the link for his publication. This publication is one that's probably more accessible through your library.

Conrad Gessner was the Father of Bibliography

As a true Renaissance man, the definition of a polymath, Conrad Gessner actively sought out education and knolwedge in a variety of subjects. As our guest this week explains, Conrad Gessner's efforts weren't merely about knowing a lot, it was about mastery of a wide spectrum of abilities.

One of his most impressive accomplishments has a bibliography known as the Bibliotheca Universalis.

In 1545, (he was born in 1515 and died 1565), he was about half a century before Shakespeare, and they overlap by one year, but in the middle of Conrad’s life, he publishes the Bibliotheca Universalis, first comprehensive bibliography of all works published in greek, latin, or Hebrew to date, it included about 12,000 works in it’s first edition, and about 3000 authors, subsequently enlarged to contain many more. It was definitely a renaissance humanist exercise.

Extraordinarily popular, people bought it, adapted it, translated it, significant in it’s time. It along with his even more impressive and ambitious Historiam Animalium and history of plants (published posthumously) made his name and reputation in his day and are the chief reasons we know him today. Quite certain Shakespeare had heard of him if not have read his works personally.

Conrad Gessner drew animals from reports as well as from life

Conrad Gessner was an accomplished artist and very good draughtsman. However, when it came to the more exotic species featured in his books, Conrad Gessner relied on the stories and drawings of other scientists and artists to compile his works.

In this week's episode, Dan explains that the reasons for Conrad Gessner borrowing drawings and woodcuts for his publications had a lot to do with the structure of the publishing industry at the time, combined with the fact that Conrad himself never travelled very far.

Borrowed drawing, he redrew… from Albrecht Durer, famous artist and woodcut artists. This was based on Durer, Durer had drawn his rhino with armored plates and hanging down armor, from a drawing that was done by someone else whose name we don’t know, but they were describing an Indian elephant, and Durer got his hands on it and Gessner got his hands on it and drew it for his book. Gessner was a competent draughtsman, he was very good at drawing plants on his alpine quests. Some of his animals are borrowed images and woodcuts from other people, sometimes his publishers would use the woodcuts from other people, and there were lots of pictures of dogs because there were lots of woodcuts of dogs, but not very many other animals. Gessner did not travel widely beyond northern Europe, so his drawings he did were of animals he would have seen in ordinary life. The other images that are included are images drawn from elsewhere. He did hire a draughtsman (at least one) to make drawings for him. Some of the images are quite fantastic, and they aren’t real animals like the maderhorn and the unicorn but alas, do not, and they were drawn from other texts writing about animals in the medieval period (bestiaries) moralized tales of animals with illustrations and some of these made there way into the Historiam Animalium. Some images came from sea maps showing great sea monsters, mermaids, monkfish, and bishop fish, etc Gessner included them because there was some authority to their existence and it hadn’t been proven.

In addition to the unicorn and the mermaid, one of my favorite Conrad Gessner creatures is the jackalope. Tell me I'm not the only kid raised in the South who grew up with stories of the jackalope? Apparently, the 17th century had these creatures, too.

Conrad Gessner dedicated one of his works to Elizabeth I

During his life, Conrad Gessner barely made enough money to support himself, and he certainly didn't achieve any kind of notable financial success during lifetime.

Barely he made enough to support his own family. He was a language teacher, and studied at various cities throughout Europe came back to Zurich where he was bron, and he went abc to the school called Carolinum school of Theology in Zurich, and given a lowly position there. He was given the job of teaching languages. He worked very hard to get by but the primary source of income to get by was the publishing of books. His books are not copyrighted, he was able to make barely to make a living. Poignant things of his life, we see letters that he had written to various people (Svengli, spiritual leader of Zurich) wrote to Zurich city council, and he complained of how hard it was to make a decent living, He was quite poor. Died prematurely, almost 50 years old, had a couple of doses of plague, but weakened by the sheer effort of writing day in and out. Some 70+ works published in his lifetime and many more published posthumously. Awarded a cost of arms by holy roman emperor at the time, entailed some copyright protection, ironically he got the copyright at the end of his life.

Conrad Gessner is spelled multiple ways, because it is in different languages

One of the most confusing things about looking into Conrad Gessner's history for the first time is the wide variety of spellings attributed to this name. It’s spelled sometimes with a C and other times with a K, sometimes with two ss-es or later with only 1 and it’s hard to feel like you’re a knowledgeable person about how to spell it, but Dan saves the day for us and explains how to spell Gessner's name:

Given all the ways in which Shakespeare’s name was spelled, even by himself, that we need to have this kind of spelling regularity, but Gessner himself when he wrote in german works, spelled his name with two ss, Conrad Gessner, so that’s probably the correct German way to spell his name. The single s comes from his Latin works, and Latin has a funny dislike of three consonants in a row, so his Latin name is Gesnarus, latinazation of his name, so instead of Gessner, it’s Gesner, and that’s only two consonants together.

So there you have it, that's how to spell Conrad Gessner. It doesn't really nail down your options, but it does substantially help with navigating all the variations you will find and why each of them are attributed to the same person. Sounds a lot like a certain bard we know, doesn't it?

I'll see you next time! – Cassidy