Actually Conies Are Mean Rabbits Because They Carry Huge Swords 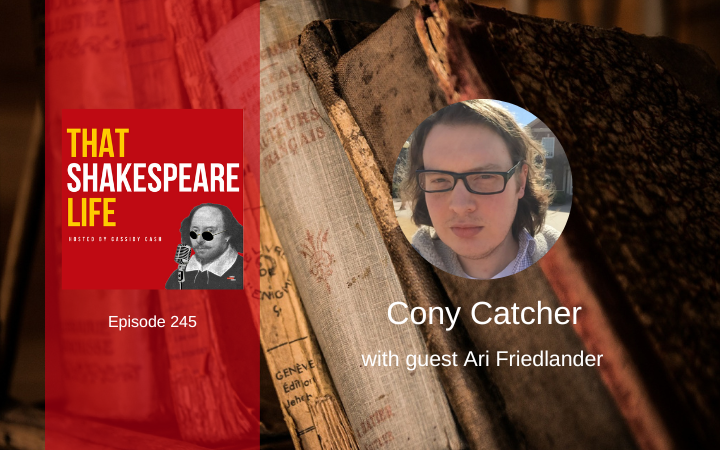 Just like Shakespeare, our show is powered by our patrons. If you love the history you learn about here each week, then please consider supporting our work on Patreon.

There were several pamphlets published during Shakespeare’s lifetime featuring a menacing giant rabbit, sometimes even wielding a sword and looking very scary. It would be easy to think this character the pamphlet calls a “cony catcher” was invented for marketing purposes, except that we see the phrase “cony catcher” come up several times throughout Shakespeare’s plays including Merry Wives of Windsor, Taming of the Shrew, and even in Henry VI Part 3. We can see from the passing references Shakespeare’s writes that a cony is a word for a rabbit, and it follows then that a catcher of conies is one who catches rabbits, but then why is the rabbit being used in early modern England as a fierce sword wielding villain? There are so many cultural questions to unpack with this symbol and that’s why today our guest and author of a new book about the Cony Catcher and other Shakespearean criminals and malcontents, Ari Friedlander, is here to take us through what we should understand when we discover rabbits running rampant in Shakespeare’s plays.

Ari Friedlander is the author of Rogue Sexuality: The Erotics of Social Status in Early Modern England and co-editing a special issue of JEMCS: Journal for Early Modern Cultural Studies entitled “Desiring History and Historicizing Desire,” based on a recent conference on the same theme he co-organized at the Henry E. Huntington Library. He has taught graduate and undergraduate courses on Shakespeare and Renaissance literature and culture, as well as theories and histories of gender, sexuality, class, and disability. Find out more about Ari and links to his work in the show notes for today’s episode.

I’ll be asking Ari Friedlander about:

Take heed, Signior Baptista, lest you be cony-catch’d in this business…

A Cony (also spelled Coney, and Conny, and Cunny), catcher is someone who pulls tricks on people for personal gain. A con artist is the phrase we use today.

Cony Catcher meant rabbit catcher, cony meaning rabbit, and cony catcher is a metahpor that comes from literature about criminals, conartists, in the Renaissance, thst purported to be an expose of the underworld of Elizabethan/Jacobean England. Coney was a symbol for an easily caught victim of crime, what we might call today, “a mark” the cony cathcer was therefore the conartists.

Marry, sir, I have matter in my head against you; and against your cony-catching rascals, Bardolph, Nym, and Pistol.

While the term cony did refer to rabbits for Shakespeare’s lifetime, the phrase “cony catcher” was slang for people who were disreputable.

They are shown picking locks, wearing swords and shields, and there’s even one male cony catcher speaking to a female cony catcher debating about which sort of criminal is the most dangerous. They are both rabbits, so there was this conundrum to explore. The pamphlets are not unknown to scholars of Shakespeare’s time, they are written by fairly prominent people like Robert Greene, Thomas Dekker, and others, and as far as he could tell no one had every noticed that the images reverse the metaphor of the cony catcher and the cony. But to answer the question of why the rabbits are violent is because they represent the dangers of the figures themselves. The larger question of why they are rabbits in the first place seems to be that it was the sexual freight of the rabbit which is an animal that’s associated with reproductive capacity, “breeding like rabbits” and not just reproducing a lot but that they reproduced dangerously. Biologists and historians tell stories about rabbits breeding so much underground that they destroyed a whole city in Spain, collapsing the rabbit warrens beneath it. There’s a dangerous sexuality because it reproduces prolifically, something seen as very bad. So the images are bringing together the images …

There is no remedy; I must cony-catch; I must shift.

Publicly produced pamphlets (alliteration accidental), were used to complain about abuses and immoralities observed in society. One of the most famous writers of such complaints was also a celebrated playwright and author, Robert Greene.

Greene was the author of most of the cony catcher images we’ve been discussing. Caterpillars of the commonwealth, meaning hat a caterpillar eats leaves in the garden as a ind of parastite that weakens the garden of the nation of England. At other times, he will describe them in other ways that employees figures which are more alluring and appealing. He will describe them critically, lamenting their not working, but also talk about the fruits of that perspective with nice lodgings and nice clothes, which a normal Londoner would have had to work to own.

Come, you are so full of cony-catching!

Cony Catchers and their tricks

In our episode this week, Ari outlines some of the ways that cony catchers would lure and then catch their prey, or marks, as they might be called today.

Cony catchers do a million kinds of things. Thy’ll pretend to need help, they’ll pretend to be beggars, or they will dress themselves up as having an injury or disease that disables them but they will happily take your donations before taking off their fake bandages and spend their money on drinks and fun at the pub later. Other examples, like the one book with a male and female cony catcher, one of the cony catchers eventually decides that the female cony catcher (The sex worker) is the winner because she says that women can do cross biting, which is a sexual extortion scheme that was very profitable according to these pamphlets. It was sort of a version of rolling the John, when a prostitute steals from a John (a client), so you could pick their picket or tie them up and take their clothes, but there are more elaborate versions where you had a male partner come in and pretend to be the husband who is now angry, and demand money not to punish them for sleeping with the prostitute. All of these situations are a play, actin to extort money from unsuspecting clients. Also things like cheating at dice, and other things.