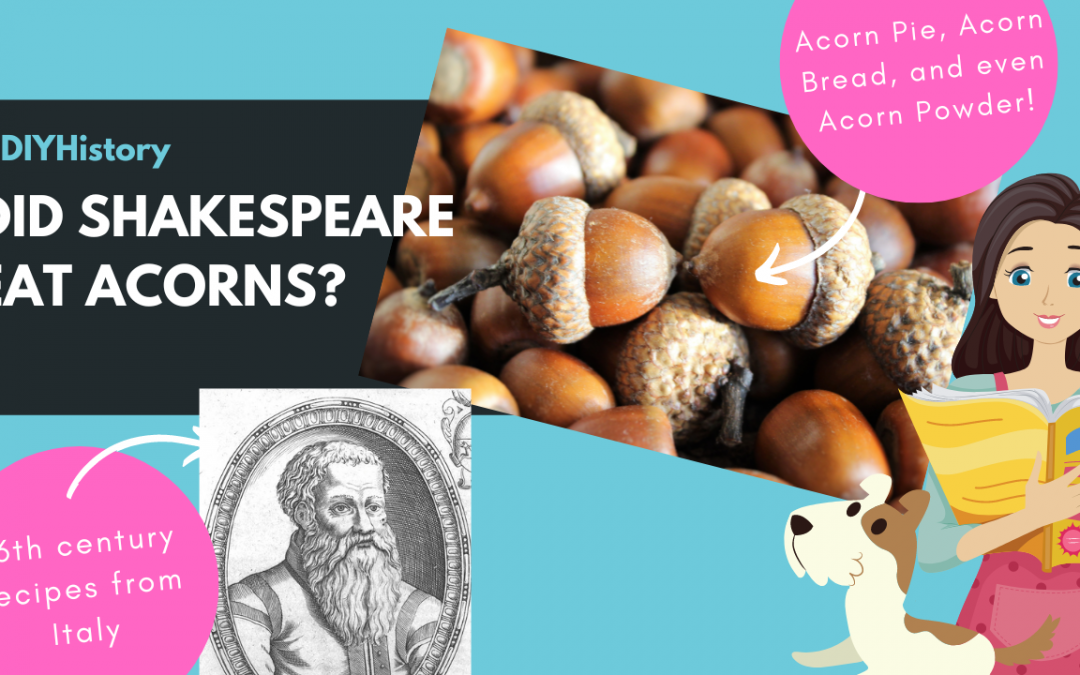 Acorns are the topic this week. Make suggestions for episode topics, see exclusive patron's only content, and other bonuses when you become a member at That Shakespeare Life. Join Today! This website contains affiliate links.

Today we’re going to explore the answers to these wondering questions by looking at the 16th century history of acorns in England, whether or not Shakespeare would have eaten them, and we’ll even take a look at some acorn recipes from Shakespeare’s England that you can try yourself at home.

Acorns as a Peasant Food

A staple of a foraging lifestyle, acorns are a “forest food.” In the 11th century, the royal forest housed pigs to eat the ones that fell in a forest full of oak tress. This Forest is still hosting pigs there every Fall to eat the acorns. (Source)

Acorns are not only great for pigs, but for centuries during times of famine and hardship, acorns an emergency food. Roman philosopher Pliny the Elder writes about acorns for bread, but only if you’re really hungry and can’t find anything else.

Acorns are rich in a variety of minerals like protein, carbohydrates, fats, calcium, phosphorus, potassium, and niacin, they are actually quite good for you, but the catch is that they generally taste bad.

That’s because acorns have a high tannin content (yes, the same tannins you find in wine), so they are very bitter. To remove the bitter taste, many ancient recipes call for soaking the acorns in either salt water or meat broth repeatedly before using them in a recipe. Different varieties of oak tree will change the flavor of acorns. The sweetest acorn belongs to the holly oak that grows in the Mediterranean.

16th century England, held acorns a food for pigs and not an appropriate food for people (outside of sheer necessity). This opinion continued right up until the Middle Ages, when acorns got a glam up.

Acorns For the Aristocracy

The aristocracy decided to bring acorns into the elite fashion of dining. In general, when the aristocracy borrows from the peasant class, they either add spices that are two expensive for the peasants, or they serve the peasant food with an expensive main course. (like large game meat).

In the reign of Henry VIII, England passed a law to protect oak trees in England, and by the middle of Shakespeare’s lifetime (that is, the end of the 16th century), planting oak trees was very popular. (Source)

The oldest oak tree in England is Bowthorpe Oak in Manthorpe near Lincolnshire, England. It is an estimated 1,000 years old with a circumference of 12.30 metres (40 feet 4 inches). (Source)

There used to be an oak at Hatfield that dated back to 1558 and the reign of Elizabeth I. I believe that tree has since died. Queen Elizabeth II replaced it with another oak that’s there today.

We know acorns were part of Shakespeare’s lifetime, because he mentions them in his plays. In As You Like It Celia says “I found him under a tree, like a dropp'd acorn.” There are 4 other references to acorns in Cymbeline, The Tempest, and two in  Midsummer Night’s Dream–as you might expect from a play set in the forest).

As far as whether or not Shakespeare himself ate acorns, I do not (and cannot) know for certain. I know they were a staple food in his lifetime.

One famous cook from the life of William Shakespeare is  Bartolomeo Scappi (1500–1577). Scappi is Italian, and you have probably seen him in previous episodes. He’s kind of a big deal for Tudor cookery and food history from this period.

In his book, Opera dell'arte del cucinare, Scappi writes about “acorn torta” or acorn pie. Get the book on amazon.

Oak leaves and acorns show up prolifically in artwork from the 15-16th centuries. In artwork from well before Shakespeare and well after, acorns are prominent. Acorns hold significant status as good luck charms, and featuring prominently in decorations. (See this 16th century acorn belt)

The walls at Hampton Court Palace feature a Tudor wall paper with acorns used as embellishment.

In German and in Switzerland they used acorns as one of the suits on their deck of cards.

Looking back into antiquity, we find oak bark and acorns were used medicinally. Pliny talks about using the acorn on the skin, and also as a treatment for stomach pain. Acorns work as an astringent or to counteract vomiting and inflammation. Acorn powder is a diuretic. At least one reference to a concoction of acorns, milk, and oak bark to counteract poison. (Source)

The Prince of Transylvania's cookbook from the 16th century shows acorns as a treatment to make your hair shiny. (Source Page 147)

FULL DISCLOSURE: I read about the acorn pie recipe from Bartolomeo Scappi in the pdf I've linked you to above. When I searched the Google Books version of Bartolomeo Scappi's Opera dell'arte del cucinare for “ghianda”, the Italian word for “acorn”, all I found were references to “acorn pigeon” which can mean either that they are cooking with acorns when they prepare pigeon, or they are talking about the pigeon having eaten acorns (both possible, my Italian is rough). Either way, I did not find a reference to “acorn torta” which I thought would be in there based on previous research.

So how can you cook them at home? Well when I went looking for recipes with acorns, I found everything from coffee to cakes and even alcohol that you can make from acorns. I have so much more respect for my oak trees now.

This next link contains numerous acorn recipes. Suellen Ocean also includes detailed information on how to harvest and prepare them. This is not an affiliate link.
https://www.yumpu.com/en/document/read/10821500/acorns-and-eat-em-by-suellen-ocean

There's also a list available from this blog about 60 different ways you can use acorns in cooking and this website features historical references to the recipes as well.

There’s a recipe from Hieatt & Butler's _An Ordinance of Pottage in the 15th century  that gives a recipe for an acorn pottage. In that book, the writer points out that acorns were traditionally food for the poverty-stricken, and that the “great portion of sugar” and other expensive ingredients in this recipe would be beyond the reach of such a person anyway. (Source: Thank you to Steph Block on this Google Groups thread for the information)

Need to be soaked

I’ve also read that if you don't soak them correctly, the tannins can actually be poisonous to people, so here’s where I suggest you begin:

Andrea Maraschi is a Lecturer in Medieval History at Università degli Studi di Bari. He has taught courses on Food history in the Middle Ages and Anthropology of Food, and he has published on many aspects connected with food in medieval times. He wrote an article on the history of the acorn in cooking for The Medieval Times, and here’s what he had to say:

In 1549, the steward of the House of Este, Cristoforo Messisbugo (†1548) posthumously published a cookbook where we find a recipe for an acorn pie. He suggested taking the acorns and boiling them in broth, and then passing them through a filter. (This is likely the removing the tannins part we mentioned earlier) Then, the cook was to add grated dry cheese, sugar, cinnamon, pepper, butter, and eggs. After making the pie, it was cooked in the oven, and finally sprinkled with sugar.

Famously, recipes from the 15-16th century rarely include precise measurements, so you’re on your own to add what tastes good. Helpfully, Dr. Maraschi explains that The basic idea of cooking acorns

was to start by removing the tannis [Note from Cassidy: by parboiling them in meat broth or salt water as we see in the earlier 1549 recipe] Then to ground up the acorns [ Again, note from Cassidy: presumably you take them out of their shell here, but it doesn’t say] using a mortar then passing them through a filter. [Again, no explanations provided about what exactly the filter needed to be–was this a cheesecloth, maybe?]… after you filter them, the actual tourte is made by mixing this powder with fresh butter, milk, creamy and grated dry cheese, sugar, ricotta or something similar, cinnamon, pepper, and uncooked egg yolks. Eventually, the pie was was put in the oven and glazed with sugar, cinnamon and rose water.

So, like so many pies in Tudor England, it’s basically a custard with nuts in it. Fancy!

If you want to try them out yourself, I am placing a whole list of modernized recipe links for how to cook with acorns (including a modernized version of the 15-16th century recipes you learned about today and precise instructions on how to remove those tannins before you cook) in the show notes for today’s episode (See the link below this video to find those) Use those to recreate this fun food staple from Shakespeare’s lifetime at home, just in time for Fall and all the pretty acorns.

Other Fun History of Acorns Links to Check out

Interesting look at the acorn as a symbol. “Traditionally a pagan symbol, the oak was re-interpreted by Christians to represent Christ, a symbol of endurance and strength in the face of adversity. Given the possible date of the manuscript, and the significant damage to the religious images only, suggests this manuscript is a rare survivor of Henry VIII’s iconoclastic reformation when vast quantities of religious materials were destroyed in a Protestant bid to rid the country of any visible signs of Catholicism.” Source

The Art and Craft of the Master Cook by Bartolomeo Scappi

Article on the history of Hieatt, et al

Credits for Images Used in This Episode:

Jim Champion | This file is licensed under the Creative Commons Attribution ShareAlike 2.5 License

Beech trees in Mallard Wood, New Forest Mallard Wood lies to the south of the A35 road, mid-way between Lyndhurst and Ashurst. The open woodland is grazed by commoners' stock and wild deer, hence the lack of lower branches and ground cover. Here the late afternoon sun is illuminating new leaves on these beech trees.- Jim Champion, CCBYASA3.0 Link: https://en.wikipedia.org/wiki/New_Forest#/media/File:Beech_trees_in_Mallard_Wood,New_Forest–geograph.org.uk-_779513.jpg