Did Shakespeare Know about Ostriches?

Well before the world enjoyed the arrival of William Shakespeare, the Tower of London had a long and well established history of housing exotic animals.

In 1288, Edward I added a lion and a lynx and created the first ever official “Keeper of the Animals”

Edward III added other types of animals, two more lions, a leopard and two wildcats. Subsequent Kings contributed to the collection adding jackals, hyenas, and even one large brown bear which was given to Elizabeth I’s father, Henry VIII by the Emperor Maximilian. It did not take long for the Tower of London to become known as a Menagerie, and by 1500s that was an official monicker for the Tower.

During 1604-1606 When William Shakespeare was 40 years old, and the same year his close colleague Philip Henslowe became Master of the King’s Bears, Bulls, and Mastiffs, the Menagerie had an exercise yard created in the moat area beside the Lion Tower. An overhead platform was added for viewing of the lions by the royals, which was where spectators would watch sporting events like lion baiting during the reign of James I.

This extensive availability, and showcasing of exotic animals is the reason we are going to take the next few weeks and explore the various animals that were, surprisingly, housed in the Tower of London during Shakespeare’s lifetime.

We kick off our 4 part series on Exotic Animals in Shakespeare’s lifetime today when we ask:

Did Shakespeare Know About Ostriches?

Shakespeare mentions Ostrich by name, along with a longstanding belief about ostriches, in his play, Henry VI Part 1. Jack Cade says, 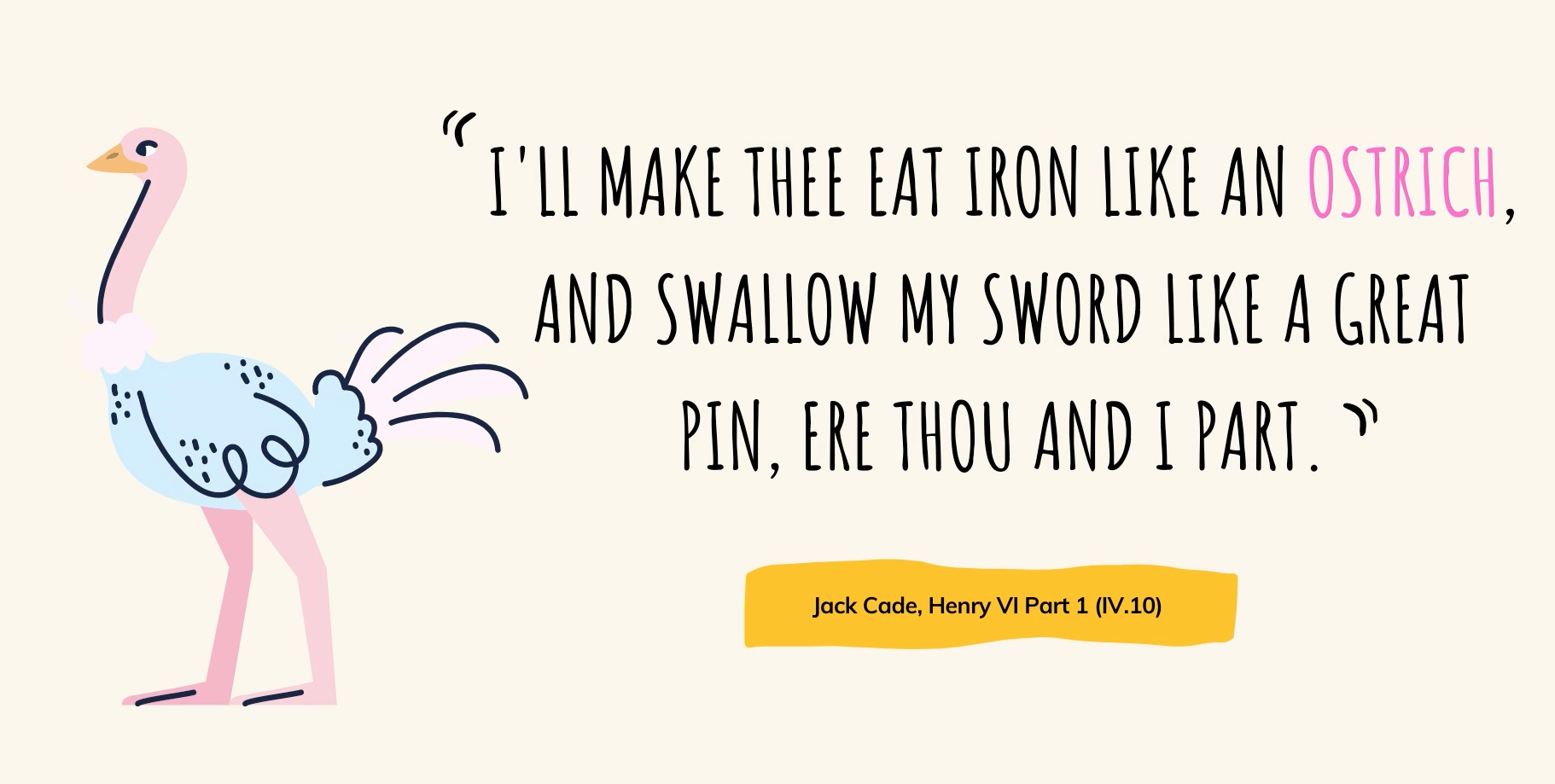 But while it seems that those specific ostriches may not have been Tower of London residents during Shakespeare’s lifetime, that doesn’t mean there weren’t ostriches at the Tower of London during Shakespeare’s lifetime (just not, apparently, famous ones) and of course, we do know from Henry VI that Shakespeare knew what they were– so how did he know? We’ll work off the assumption Shakespeare didn’t visit lands where ostriches are native, so what exposure to them did he have in 16th century London? First, we start with the Bible:

I found a 12th century Bible with a picture of an ostrich in it, housed at the Bibliotheque National de France and helpfully digitized, which you can view in the show notes 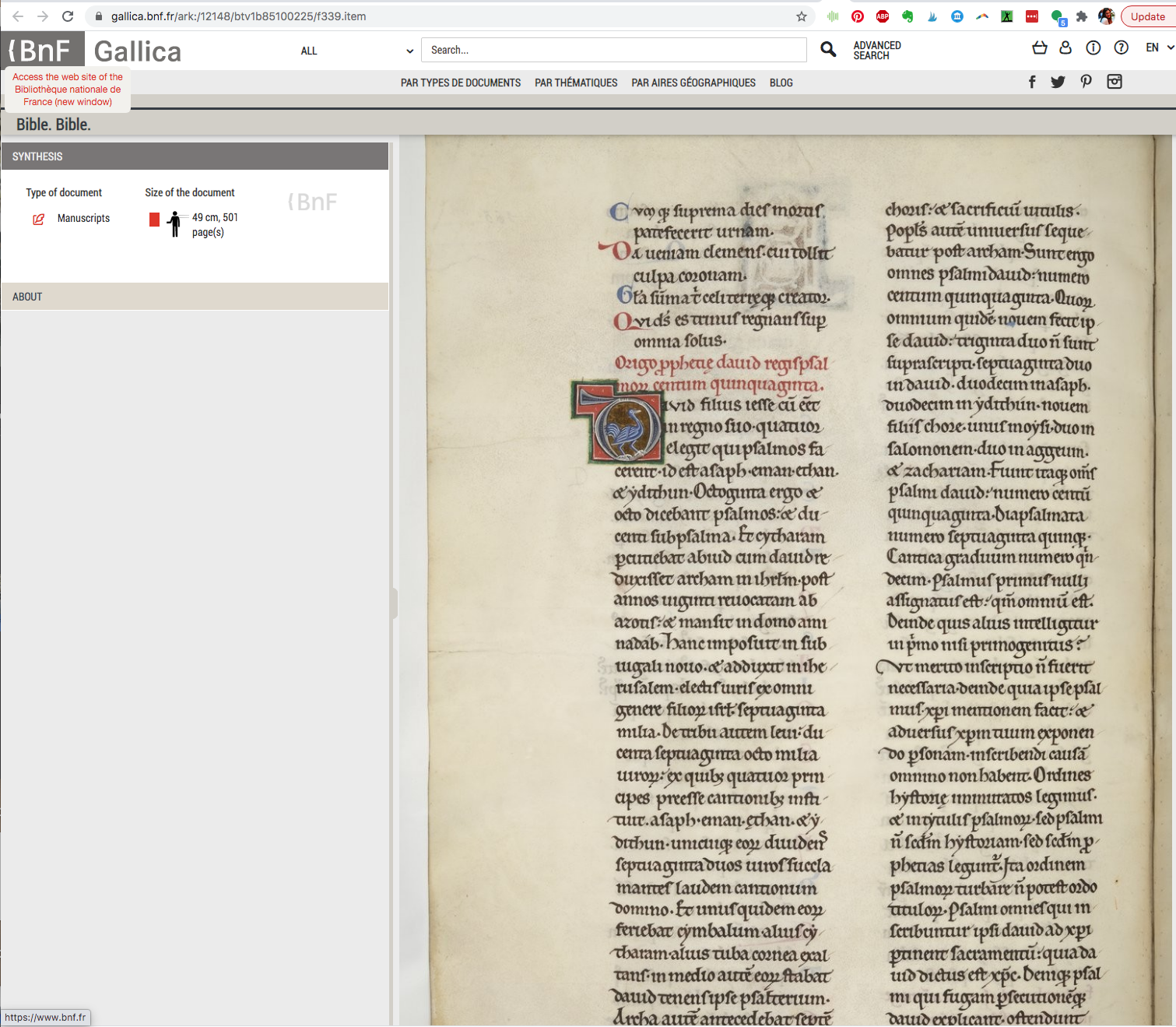 Screen shot of a 12th century Bible featuring an ostrich illustration. Found at the website of the Biblioteque Nationale de France website here. The screen shot was taken by me of my computer on November 20, 2020. The website was successfully accessed Nov 20.2020.

So why would Shakespeare have known about a 13th century Bible? Well, I don’t know for certain if he did, but I do know that the Bible was a big deal in England. Based on his baptism, and regular attendance at Holy Trinity CHurch, Shakespeare knew what the Bible was, and read it himself.

In Episode 3 , Jem Bloomfield walks you through the history of Shakespeare and the King James Bible,

In Episode 92, Helen Cooper walks you through Chaucer’s influence on Shakespeare, where she discusses the popular mystery plays that made the Bible accessible in performative form

And we also have episodes on Jews and Puritans in Shakespeare’s England that explore the Bible as well.

Find links to all of those episodes as great places to start if you want to explore Shakespeare and the Bible. But what does any of this have to do with ostriches? I’m glad you asked.

For understanding Shakespeare’s context for ostriches, I point you to a copy of the Wycliffe Bible, written in the 14th century, that talks about ostriches: 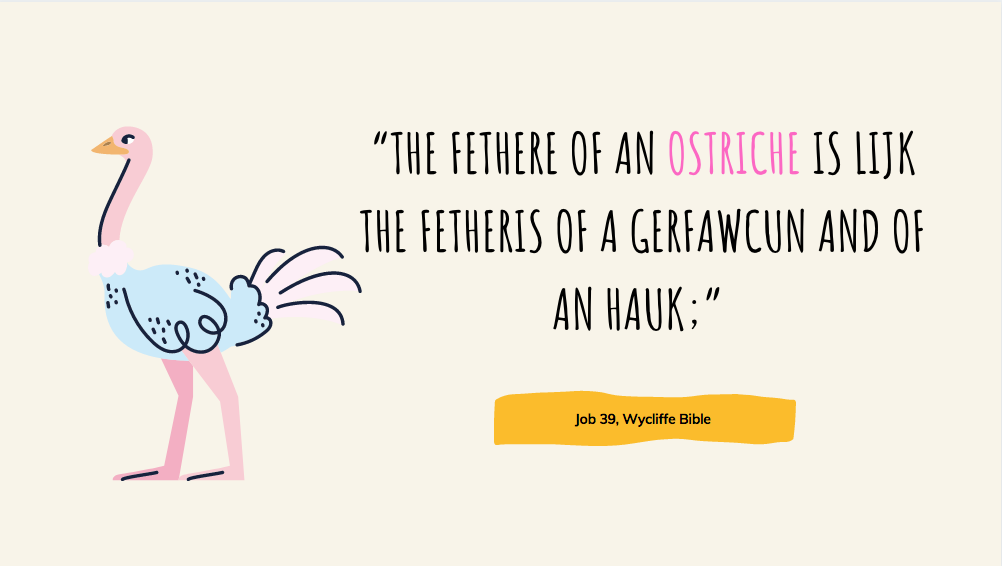 Although Wycliffe’s followers, were persecuted and practically disappeared from England, John Wycliffe’s influence was foundational to the great Protestant Reformation of the early 16th Century, and arguably Wycliffe is one reason Shakespeare was Protestant. But the connection of Shakespeare to wycliffe that might make it plausible he’d read wycliffe’s bible comes even closer to home because John Wycliffe was a leading theologian and philosopher at Oxford. He was patronized by John of Gaunt, who also patronized Geoffrey Chaucer, and it would make sense ot think Shakespeare might have read the Wycliffe Bible.

Does that mean that’s where Shakespeare learned about ostriches? No, of course not. In fact, before I get any nasty letters on the subject, lets be clear that I don’t know what version of the Bible Shakespeareused for his many biblical allusions in his plays. So make sure you hear that. I am justpointing out the quote from wycliffe because it’s another piee of evidence that places ostriches into the life and history of William Shakespeare and 16th century England.

The most popular Bible in Shakespeare’s lifetime was the Bishop’s Bible, (click that link to read the Bishop’s Bible digitized by permission of the Church of England) and in case you’re wondering, the Bishop’s Bible (which is digitized under the authority of the Church of England and available online at a link in today’s show notes) Job 39:13 also talks about ostriches, but they call it the “Estriche” Before we go too far into biblical analysis, however, I’ll say that we officially need to cover Bibles on our show, so stay tuned for an episode on that. 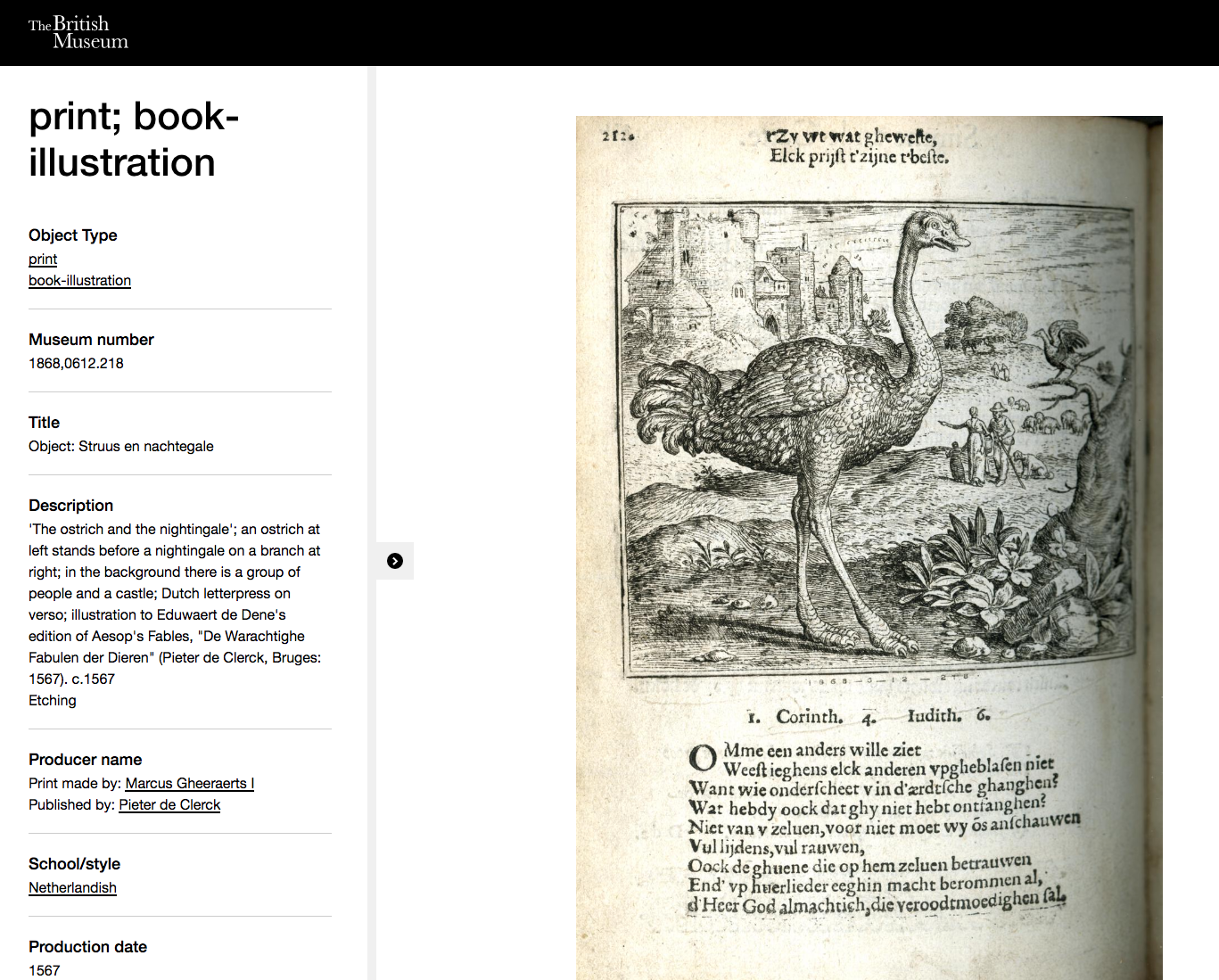 Object: Struus en nachtegale | ‘The ostrich and the nightingale’; an ostrich at left stands before a nightingale on a branch at right; in the background there is a group of people and a castle; Dutch letterpress on verso; illustration to Eduwaert de Dene’s edition of Aesop’s Fables, “De Warachtighe Fabulen der Dieren” (Pieter de Clerck, Bruges: 1567). c.1567 Etching | Print made by: Marcus Gheeraerts I Published by: Pieter de Clerck | See the actual image here.

I also found this record (I took a picture of my computer screen shown above) of what is essentially the Dutch version of Aesop’s Fables, and this image was created in 1567. It is housed in the British Museum and there, big as life, is an ostrich.

And there are tons of other links to archival images of ostriches from the 14-15th centuries, as well as earlier which are all potentially ones Shakespeare could have seen in his lifetime, presuming he was real read (and everything we know about Shakespeare’s study of works like ancient Greek/Roman history, as well as reading histories like Holbien, suggest he was well read). I will link you to the website where you can thumb through these pieces of artwork yourself to discover the visual world of woodcuts and illustrations of ancient ostriches, find those in the show notes.

One that I think relates to the how it came about that 18th century London apparently believed ostriches ate nails, there was at least somehistorical precedent for this mindset. I haven’t fully explored this legend, but I did find this image of an ostrich eating a horseshoe 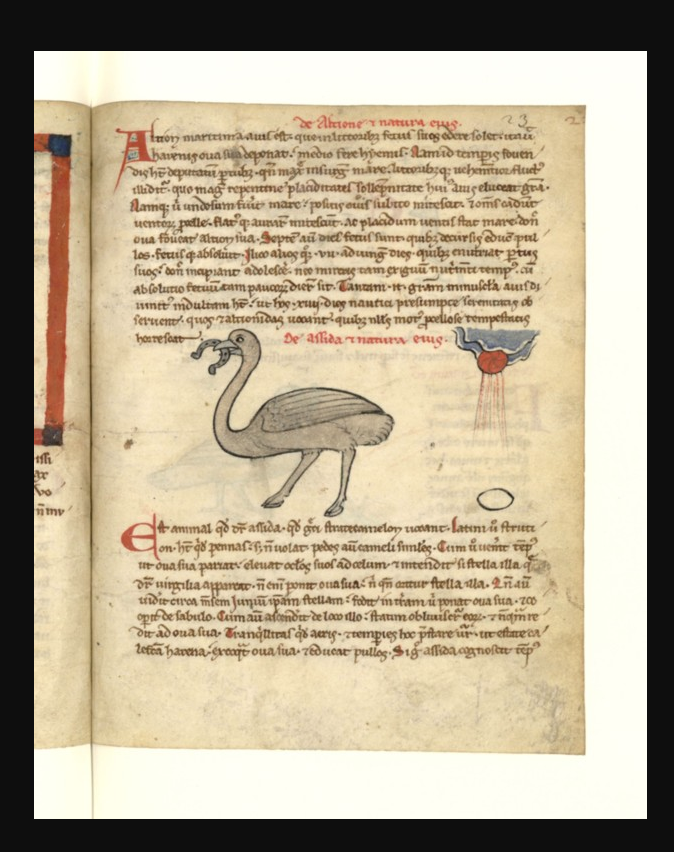 This image is a screen shot of a record held inside a 13th century bestiary. I found the record cataloged at this website. The original is at the Biblioteque Nationale de France. | the record I have screengrabbed above is the fifth record down on the page linked here.

I found no less than 6 illustrations of ostriches eating horseshoes (specifically) as well as one of a man feeding nails to an ostrich, 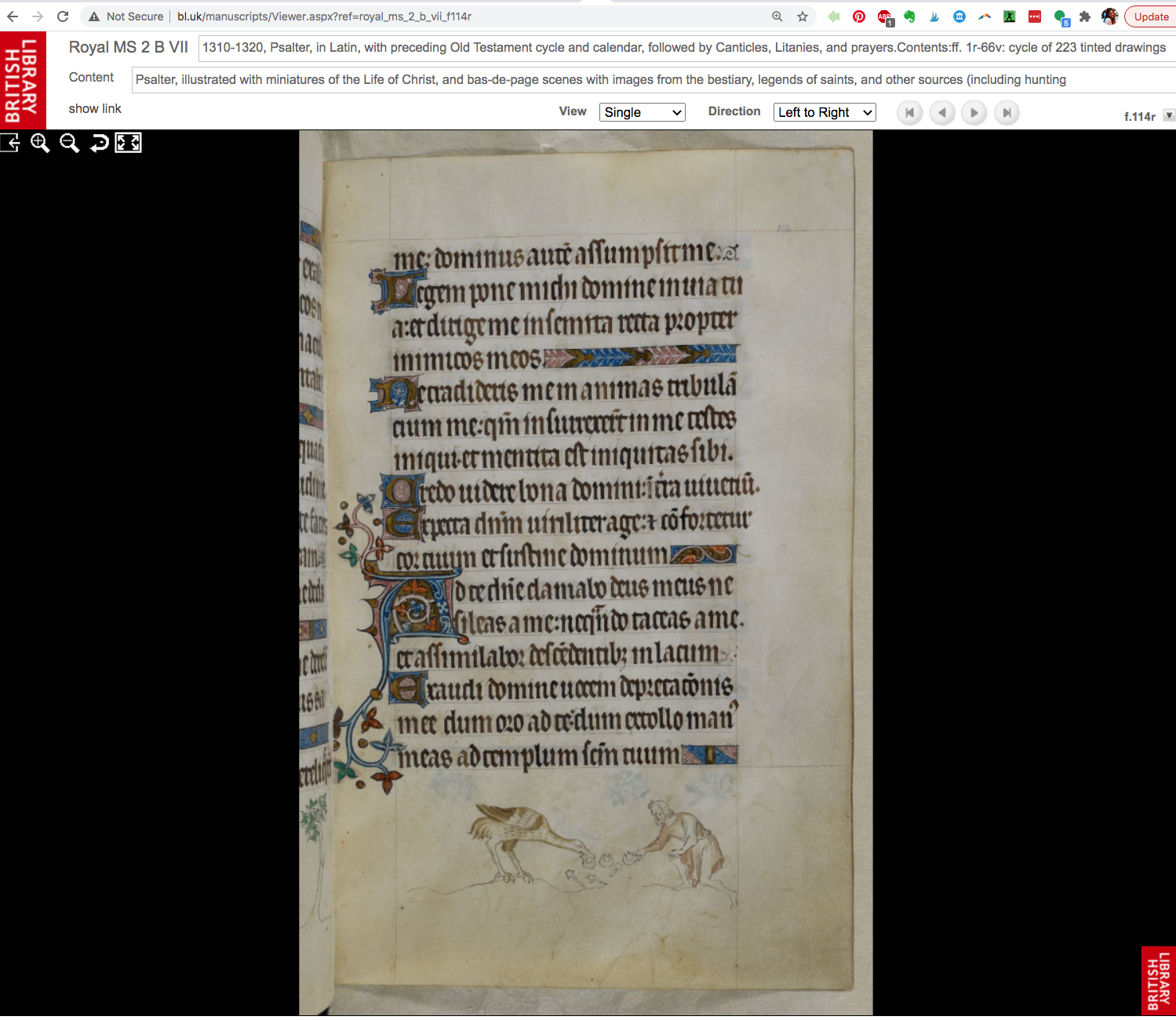 So here’s what I found out about ostriches in 16th century London.

According to the Met museum in NY, the ostrich was known, and considered incredibly exotic, rare, and consequently, images of ostriches were used to communicate great wealth. You might make a modern connection here with the use of the jaguar on the front of very expensive cars today, for example. In Shakespeare’s lifetime, in London, ostriches were considered symbols of affluence.

As a result, they were often placed on the top of specialty silver cups as decoration, and the cup itself was shaped (and sized) to match an ostrich egg: 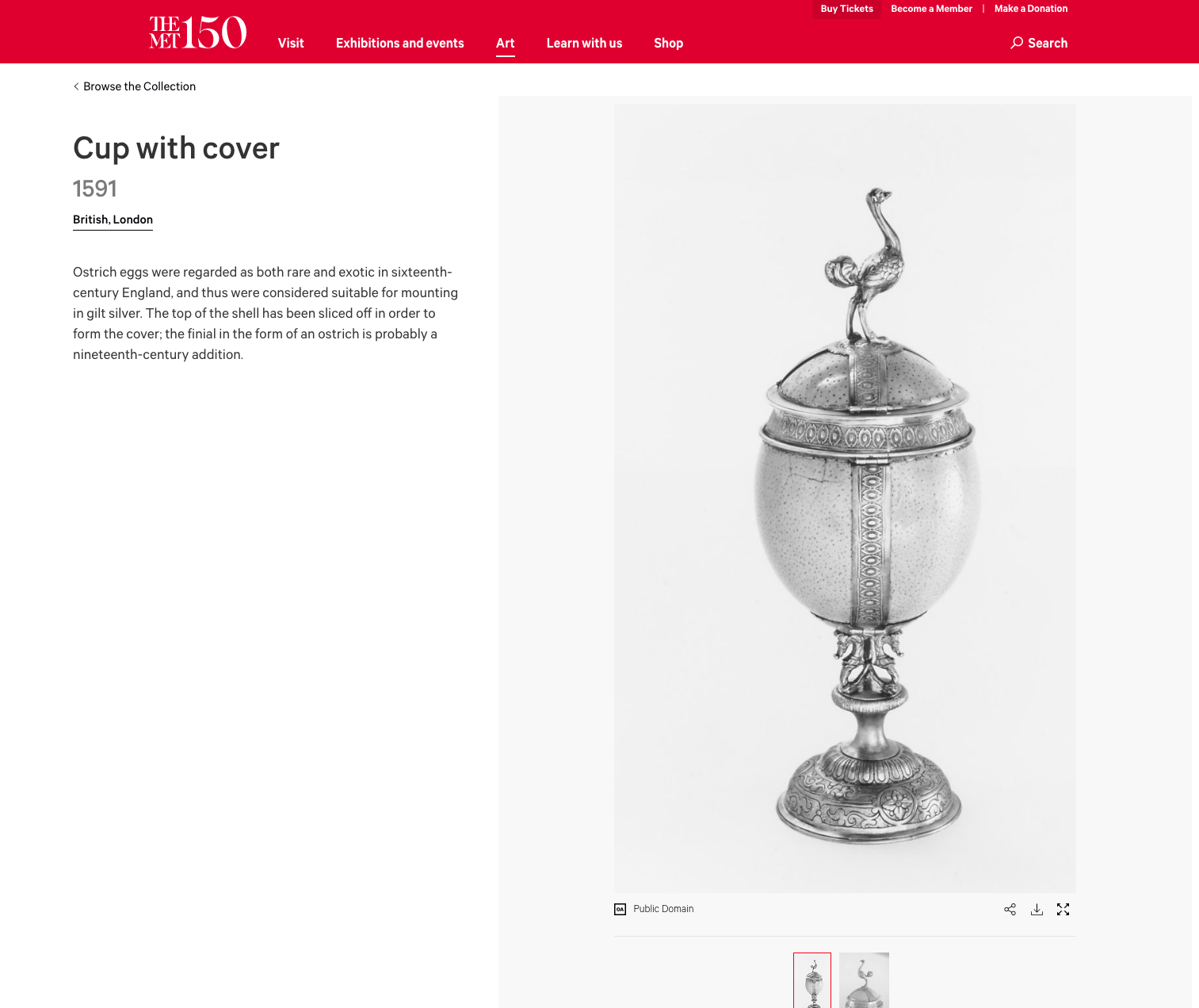 This is a screen shot of the website where the Met talks about this item of their collection. Accessed Nov 20, 2020. Original Source

This silver cup is dated to 1591, London, so it is within Shakespeare’s lifetime and in London where we know Shakespeare lived and worked.

Colored ostrich feathers were also popular in the 16th century. Read more about that here.

That’s it for this week! Do you know something cool about 16th century ostriches in Shakespeare’s England? Tell me about it in the comments! I’m Cassidy Cash, thank you for watching. I hope you learn something new about the bard. I’ll see you next week!