Did Shakespeare Know About Puritans? 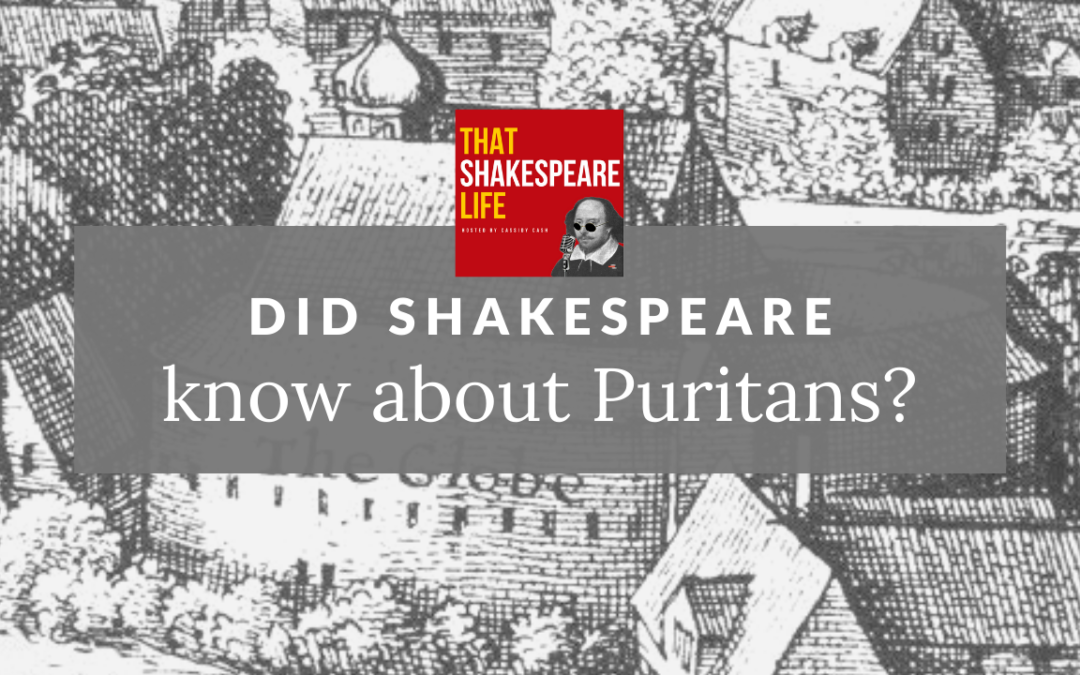 Absolutely! You may even already know about the force of the Puritans in England because they were a big deal. Here’s a few things you may find surprising about their relationship to Shakespeare.

When you try to talk about the Puritans in Shakespeare’s England, many people can and have spent their entire professional lives investigating the history that is available on this subject. So for today, we’re going to confine our discussion to Puritans during the Elizabethan Era, specifically during Shakespeare’s lifetime.

This week we are asking : Did Shakespeare Know About Puritans?

The answer to this question is a resounding yes. Not only because Puritans show up in Shakespeare’s plays, most notable in Twelfth Night with the puritanical Malvolio, but also because Puritanism was a huge force in England for Shakespeare’s lifetime, even impacting the theater.

The word Puritan itself began right around the same time Elizabeth I began her reign as Queen in England. They were a specific religious group within England, they were Protestant but highly conservative. They were strong advocates for a strict moral code and behavior, including the abhorrence of anything flashy, overt, or really–anything you might consider fun. They opposed the playing of games, wearing clothes that were too brightly colored, and they hated The Globe theater. Puritans saw this form of entertainment as a cesspool breeding debauchery and sin. In some respects, the Puritans were not wrong in their assessment of what went on at theaters like The Globe, since public playhouses were far from the respectable highbrow events we know them as today, but personally, I’m glad the Puritans were not able to completely shut down the theaters so that we have the benefit and joy of Shakespeare’s work in our lives today.

Despite not succeeding entirely, however, doesn’t mean they didn’t try to shutdown establishments like The Globe.

Theaters like the Globe were a new thing, and like any society, there was a great suspicion about the new and unproven. New things can be great, and go on to accomplish helpful things in society, and they can also destroy something good. When it’s new, there’s a question about what will happen if it’s allowed to flourish and the Puritans were opposed to finding out. Despite the reputation they have today of being spinsters and killjoys, the Puritans actually had good reason to oppose the theater. Theaters drew large crowds, thousands of Londoners would pack into a theater for a performance, and the locations were used for unsavory activities like bear baiting, gambling, and brothels. There are some stories of young apprentices who were lured away from their respectable internships and put to work in the theater as an actor instead. You can imagine many parents were likely less than thrilled. Commonly the crowds of people being together in one place would also attract theives, pickpockets, beggars, and prostitutes, whose industries thrived on volumes of people being together where it was easier to solicit their wares. Additionally, there weren’t effective treatments for things like Bubonic Plague during the 16th century, and gatherings of people who behaved in unsanitary manner with drinking, fighting, and defecating on the ground, all helped to spread the deadly disease. On the whole citizens of the more respectable crowd were opposed to the theater, which is one reason Shakespeare and the Burbages had so much trouble getting approval to open their Blackfriars theater which was located in a nicer side of town.

The Puritans would persist in opposing theaters until finally (after Shakespeare’s death) they would succeed in eliminating theater from London. Lead by Oliver Cromwell, a Puritan elected to Parliament, opposed King Charles I and civil war broke out. In 1642, The English Parliament issued an ordinance that closed all the theaters. By 1644, Shakespeare’s Globe theater would be completely demolished. While Shakespeare himself was not alive to see it, his daughters Susanna and Judith Shakespeare were alive to see the demolition occur, and I can only imagine the heartbreak they must have felt for their father’s memory.

Shakespeare may not have lived to see the Puritans demolish his theater, but he felt their sting during his writing days enough to make fun of them through his plays. The character Malvolio in Twelfth Night is perhaps the most well known instance of Shakespeare making fun of the Puritans, but his character of Shylock does as well. Shakespeare’s Malvolio is even said to have been based on a real life Puritan named William Knollys, who was the First Earl of Banbury.

Knollys is a likely target for Shakespeare’s mockery since as a Puritan, he would have been opposed to Catholics, and a hard critic of theater.

Joseph Pearce writes in his article “Shakespeare vs. The Puritans: The Malevolence of Malvolio” for The Imaginative Conservative  (March 2018) that one reason Puritans, like Knollys, opposed the theater is because they thought the theater and promotion of catholicism were intertwined. He writes:

Puritans considered the theatre to be a dangerous disseminator of papist ideas can be gleaned from a sermon by the Puritan preacher, William Crashaw, delivered at St Paul’s Cross in London in 1608: “The ungodly plays and interludes so rife in this nation: what are they but a bastard of Babylon [a euphemism for Rome in puritanical Biblespeak], a daughter of error and confusion; a hellish device—the devil’s own recreation to mock at holy things—by him delivered to the heathen and by them to the Papists, and from them to us?”

Pearce goes on to write that Shakespeare himself was actually a target for Puritans, something of a celebrity, he found himself the object of their wrath.

“In the History of Great Britain … the Protestant historian, John Speed, published in 1611. Discussing the Lollard leader, Sir John Oldcastle, who had suffered during the reign of Henry V and who was considered a proto-Protestant and as the “morning star of the Reformation,” Speed was at pains to discredit attacks upon his reputation by papists and playwrights. Complaining that the Jesuit, Robert Persons, had described Oldcastle as “a ruffian, a robber and a rebel,” Speed riposted by suggesting that Persons was a liar, along with “his poet,” Shakespeare:

And his [Persons’] authority, taken from the stage-players, is more befitting the pen of his slanderous report than the credit of the judicious, being only grounded from this Papist [Persons] and his poet [Shakespeare], of like conscience for lies, the one ever feigning and the other ever falsifying the truth.

This astonishing attack upon Shakespeare, calling him a falsifier of the truth and a sidekick of the Jesuits, demonstrates the general suspicion with which he was held by the Puritans.

Robert Persons would go on to write works about history that refute the famous John Foxe’s version of history, and cites Oldcastle specifically as a “ruffian knight…commonly brought in by comedians on their stages.” Scholarly research into the life of William Shakespeare who compare these references to Shakespeare’s plays, have concluded that not only is Oldcastle a reference to Shakespeare’s depiction of Oldcastle, under the alias of Sir John Falstaff, from Henry IV Part 1, but James O Halliwell-Philipps concluded that Falstaff was Shakespeare’s version of Oldcastle in his research from 1841. (This information is from Pearce’s article as well, I paraphrased for my write up here. Read his article here.)

So it seems that Shakespeare was not only located in close proximity to Puritans (many living on the same street as he did in England–and some of those being the ones who would go on to travel to the new colonies across the Atlantic) but he was actively, and personally, attacked for his role in the theater by Puritans. So this week’s answer is absolutely yes, Shakespeare knew of and was attacked by the Puritan faction of England during his lifetime.

Each week I send out the latest updates on the newest videos, articles, and resources available from That Shakespeare Life. Subscribers get free artwork (like this road map to the Characters and Context of Shakespeare’s history plays–so you can see which Duke goes where!) just for being a subscriber. Subscribing is free! And when you sign up, you can download this map immediately to welcome you.