Did Shakespeare Know About Virginia Dare? 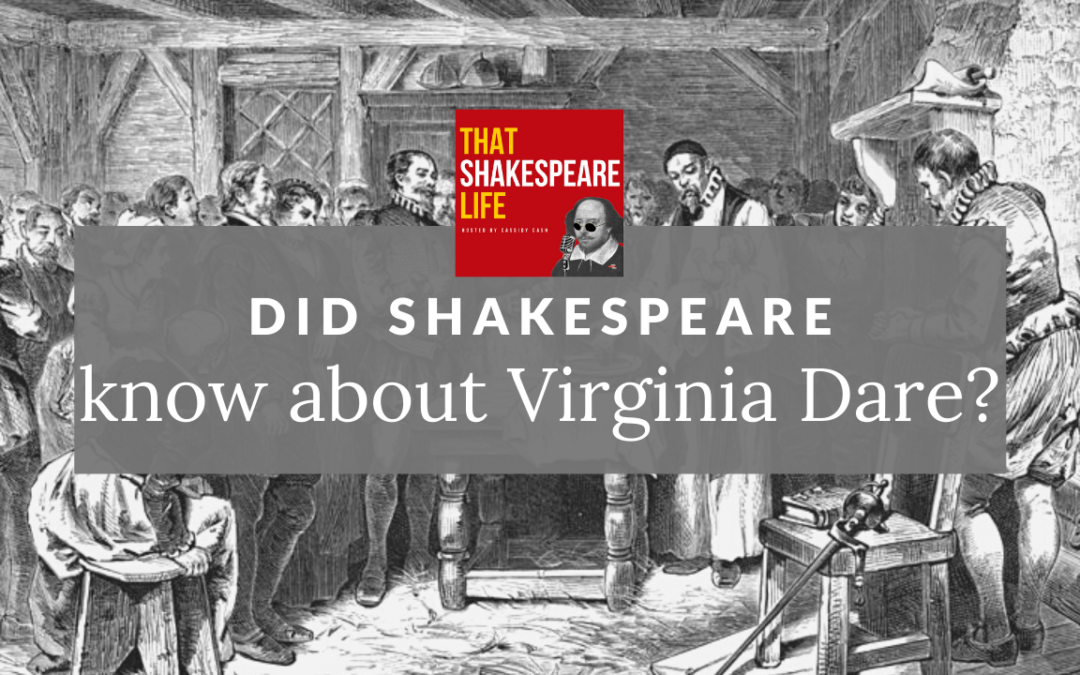 Obviously, we cannot know for certain what Shakespeare did or didn’t know, but we can surmise from great evidence. In this case, there is a consensus among historians that yes, Shakespeare–and indeed everyone in England—knew about Virginia Dare.

Virginia dare was born in 1587 and was the first English colonist born in the Americas.

We don’t quite know what Shakespeare was doing this year, because 1586-1594 are what are known as Shakespeare’s Lost Years because we have not yet found documentation to define where Shakespeare was at, or what he was doing for those years. We do know at some point over these 8 years that the bard was moving to and settling into London, however, because we have records of his first plays being successful in London in 1594, and we do have Venus and Adonis, Shakespeare’s poem, registered in 1593.

Sir Walter Raleigh attempted expeditions twice before to Roanoke Island. The second was a failed attempt to establish a colony on the island. The third and final expedition in 1587 was led by Governor John White and consisted of 116 men and women.  Virginia Dare was born on Roanoke Island during the third expedition less than a month after it landed at Roanoke. Nine days after her birth on August 27, 1587, John White left the colony pledging to return in three months. He returned to England, reported to Raleigh, and requested aid.  However, the Spanish Armada attack in 1588 delayed White’s return to Roanoke. White finally returned three years later on August 18, 1590, Virginia’s third birthday, and he found the colony abandoned.

Such a story is intriguing and launched Virigina Dare into the legendary status that continues today, with historians and fans alike ruminating into all manner of tv special, expedition, and all out investigation to try and discover what really happened to Viriginia Dare.

But does that mean Shakespeare would have known about her, too? Many Shakespeare historians tend to think that answer is a resounding yes.

Not only were the expeditions popular current events for England in the 16th to early 17th century, but numerous letters, and indeed return trips from the colonies as Governor John White took himself after Virginia Dare was born, were taken to keep the English financiers informed about the progress of the colonies and what was happening there, so if the letters and books being published weren’t enough (of which there were many) there were also first hand accounts from the people living there.

Some historians even think Shakespeare based several of his characters in The Tempest on stories from the new colonies.

One man and his colleagues, Tucker Brooke and assistant professor of English at Yale University in 1922, wrote “Shakespeare’s Principle Plays” where in his introduction to the Tempest he cites Virginia Dare specifically both to tell her story and to identify a scholar named Edward E. Hale who suggested Miranda in the Tempest was based off the story of a girl from Massachussets. He follows that suggestion with the statement that “another theory” suggested Miranda was based off the tales of Virginia Dare, claiming that when “the settlement was next renewed” in 1607, that 7 of the English from the Roanoke Colony were found alive living among the Indians, including one young girl, supposed to be Virginia Dare (though she would have been 20 by that time, so I find this claim speculative at best). Brooke cites an otherwise unclarified scholar named “professor raleigh” who he quotes as saying Shakespeare based Miranda on a guess at what Virginia’s childhood might have been like in the colonies.

While trying to decide what stories Shakespeare was using to write the characters in the Tempest is a long and storied work of hundreds of scholars it will take too long to hash out in my lifetime much less on today’s episode, the consensus does suggest that Shakespeare knew who Virginia Dare was and that there was a knowledgeable understanding of the colonies and the expeditions to America for the people back home in England.

Each week I send out the latest updates on the newest videos, articles, and resources available from That Shakespeare Life. Subscribers get free artwork (like this road map to the Characters and Context of Shakespeare’s history plays–so you can see which Duke goes where!) just for being a subscriber. Subscribing is free! And when you sign up, you can download this map immediately to welcome you.