Did Women Act on Stage? 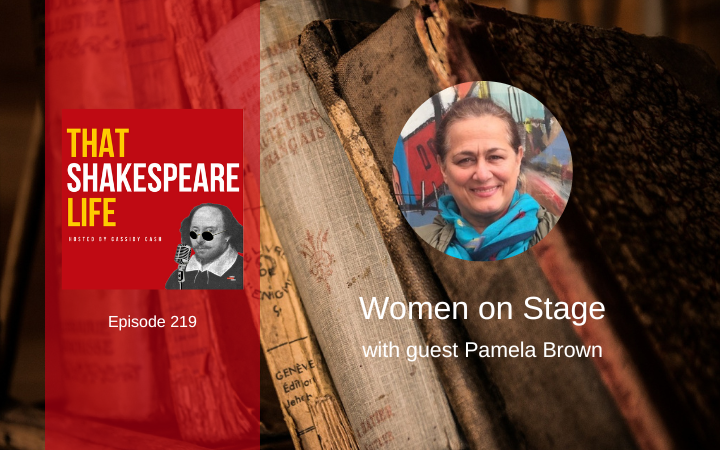 Just like Shakespeare, our work is supported by patrons! You can support the work we do here and be a part of a community of Shakespeareans, then consider becoming a patron. This website contains affiliate links.

Welcome to Episode 219 of That Shakespeare Life, the podcast that goes behind the curtain and into the real life and history of William Shakespeare.

One of the most accepted statements you’re liable to find about Elizabethan theater online today is that playing companies were all male companies. The idea of a woman on stage is considered forbidden, or not allowed. However, our guest today, Pamela Brown, has recently published a book called The Diva’s Gift to the Shakespearean Stage where she presents evidence that women did participate in performances on stage during Shakespeare’s lifetime. Her work challenges what I thought I knew about Shakespearean theater, and I’m delighted to have her here today to help clarify this part of Shakespeare’s history for you, too.

I'll send you a notification when a new episode is available!

Pamela Allen Brown is Professor of English at University of Connecticut. Her new book, The Diva’s Gift to the Shakespearean Stage, has just been published by Oxford University Press. With Julie Campbell and Eric Nicholson, she edited and translated Isabella Andreini's Fragmenti di alcune scritture (Lovers' Debates for the Stage), forthcoming in 2022 from The Other Voice in Early Modern Europe. Her other publications include Better a Shrew than a Sheep: Women, Drama and the Culture of Jest in Early Modern England; As You Like It: Texts and Contexts (with Jean E. Howard); and Women Players in England 1500-1650: Beyond the All-Male Stage (with Peter Parolin). She is a founding member of Theater Without Borders, a working group of scholars of early modern drama and performance.

Places to connect with Pamela Brown:

I'll be asking Pamela Brown about:

Important links to people Pamela wants to express gratitude for their contributions/inspirations for her work. Where I was able to find them, I've included links to these groups. These are not affiliate links.

Women on Stage in Stuart Drama

Women on the Renaissance Stage

Engendering the Stage.  One of our previous guests, Callan Davies, writes with this group and we have included some of their research in the Detailed Show Notes. (Login using the Patreon button below to expand the full extras including more information on Engendering the Stage).

If you can't see the images above, or you want to see the author/title in text format, here's a list of the titles shown:

Rosalind Kerr,  The Rise of the Diva on the Sixteenth-Century Commedia Dell’Arte Stage.  University of Toronto Press, 2015.

James Stokes, “The Ongoing Exploration of Women and Performance in Early Modern England: Evidences, Issues, and

Women on Stage Was Not Officially Banned by Any Rules

There weren't any official rules against women performing on stage for Shakespeare's lifetime. In fact, when it came to performance in a more broad sense (meaning outside of the Globe or other “playhouses”) women were a normal, expected, and regular part of those performances. Events like civic pageants, street performers, acrobats, tumblers, and even court masques all regularly saw women perform as actors.

Explore one of the most famous civic pageants, The Lord Mayor's Show with our guest, Samuel Jermy

There were factions within society that opposed women being in those professions, most notably the powerful an influential Puritan groups of England (and the Netherlands) who felt it was inappropriate, even immoral, for a woman to be on display. While religion as a major factor in the unwritten rules of society in England during Shakespeare's lifetime, it was more the culture of England as a nation that didn't accept women in professional theater.

There’s a concept out there that women were banned or regulated in some fashion and the word “ban” you hear around so the first thing you have to establish is that there were no written rules or written statues (even from a guild document) about women playing, or banning/excluding women from performing, or even written statutes permitting them. Beyond the professional stage we still find that opposite to what we might predict, women are appearing in all of these places by tradition and custom and in some instances, at court, certainly, it is highly accepted from Elizabeth, Henrietta Maria, James’ wife, etc. Elite women performed on stage. For London we think about parish drama, civic pageants, and women performed in these and we have records of women performing here.

Acrobats, tumblers, rope walkers, morris dancers, these are kinds of street performers, but these are kinds of theater. Theater is not just scripted plays, but the way that you painted it was that the professional companies only that excluded women but other areas were welcoming and it was traditional and accepted common practice for women to perform in these venues.

An important point to court masques performances though was that women did not speak. There were no spoken lines done by women. Parish roles and country house dramatics there were speaking roles so it was the professionals that makes the feature of the male actor as a female impersonator.

Women on Stage Wasn’t Accepted in England, but was Prominent in Italy

In her book, Pamela cites the English playwright John Marston’s play, Histrio-Mastix from 1599, in which a character advise the English theater to include more women in order to raise their performances to the level of Italian performances, a country where women are welcome and prolific in theater performance during this same period.

Pamela shares that these Italian playing companies, including their women players, did visit England to perform plays before Queen Elizabeth, in a move that was quite contrary to the behavior of similar English troupes.

By the time Marston wrote this play, 1599, could be anytime in the 1590s, but by then Shakespeare’s writing by now and the uptake of Italian mix gender theater was in full swing. Two large troupes of Italian men and women had visited England, at least two that we know about to play for Elizabeth and we know that Elizabeth was the most thoroughly diva like queen, and she was highly competitive with foreign queens (like Catherine de Medici) and the french royals/Italian dukes and duchesses who patronized these players. Elizabeth made it known she wanted to see Italian players, pastorals and comedies performed during her Summer progress (1577/78, stayed 8 months in that period and played a variety of offerings in the city and liveries, with a license to play). When they played at court they displaced English players of children and adults. Later on in 1602/1610, two more troupes came and there’s documents of that, which played the amarata, the refined woman in love. This is the central thesis of the book as having an enormous influence on English playwrights. There are reports back from the Continents about seeing the Italians and their actresses, so what happened as envy and some fear, with rivalry and imitation and adaptation, but the overall impact was clear, Italian pots and playing methods with stellar female characters appeared in 1580s in plays set in Italy and the Mediterranean. The trendsetters, like Lily Marlowe and Kit, they wrote pastorals tragedies and comedies in the style of Italian troupes.

At one point the Comedia del’Arte was all male. When the unmasked actress came it was a radical change for the repertoire, there was more emotion, and the women became stars quickly as novelties. The “arte” changed it’s repertoire to showcase these women, which comes back around to things like histrio-mastix, where people start to realize English theater can advance if they are willing to change.

One of the main reasons (that often gets overlooked, at least in my opinion) that women weren't performers on stage in theaters like The Globe or The Curtain was that women weren't considered professional. It was not part of the industry standard for playhouses. It was considered an amateurish move to have women in your playing company.

By 1600 all countries like Italy and Spain, had women in theater. But they didn’t travel. Italy was the one travelling and presenting this format to the rest of Europe. England was something of an anomaly, but it’s a matter of debate in this field. Netherlands had all male theaters, but that was closely related to religious beliefs. The protestant ethos, and especially Puritans, were against theaters. They were even more so against the role of actress, and not just similar to prostitution, but equal to prostitution itself. A women showing herself to the public and being paid for it was equated with a woman selling sexual display. You could be an amateur actress and it was ok in  the Netherlands, but you couldn’t take money for playing as a woman without being labeled a prostitute.

… the all male format was elevating performance above the vulgar/continental actresses who played as well as above street/parish performances. All male was a feature that created an elite/refined club than other formats.

Women owned playhouses and were patrons of playing companies

We know that Queen Anne, wife of James I, had a playing company called The Queen's Men, and Elizabeth I also had a playing company the Queen's Men. The fact that it was considered unprofessional at best, and criminally immoral at worst, for women to be involved in theater, it seems incongruous with English culture for women to be patrons of theater, particularly at the highest level of the government. I asked Pamela what her thoughts were on women owning theaters and whether she had encountered examples of women owning companies themselves in the early modern period from her research. Here's what she shared.

[You have to make a distinction between] Ownership vs Patrons. Ownership of playhouse Inns, the Crosskeys, Bell Savage, and the Bull playhouses. There were women who owned theaters, Margaret Green, through her husband inherited property in the theater The Theater, (the Burbages) she inherited from it but there was long wrangling litigation over her ownership , but there weren’t any women…who joined a playing company.

Explore fencing at the Bell Savage with our Guest Jared Kirby

Women on Stage Were Criticized for Their Behavior

When women did decided to perform on stage (and it seems to be rare, but not unheard of), they weren't well received. Undoubtedly, this public criticism was a motivator, or perhaps deterrent, for many women that might otherwise have considered that profession. One famous and flamboyant example of a woman who performed on stage is Moll Cutpurse, also known as Moll (or Mary) Frith. She performed at The Fortune theater, to intense criticism.

Moll Firth performed 1611, on the Fortune, and she was criticized for lewd/immoral behavior. Thomas Coryat, says he have heard of women performing on the stage in London and there are a few other instances in documents, there was a place that all by one virgin in London, not specifying which stage it was but that this was not for women who performed necessarily the loss of all status, you’re horrid, get out of there.