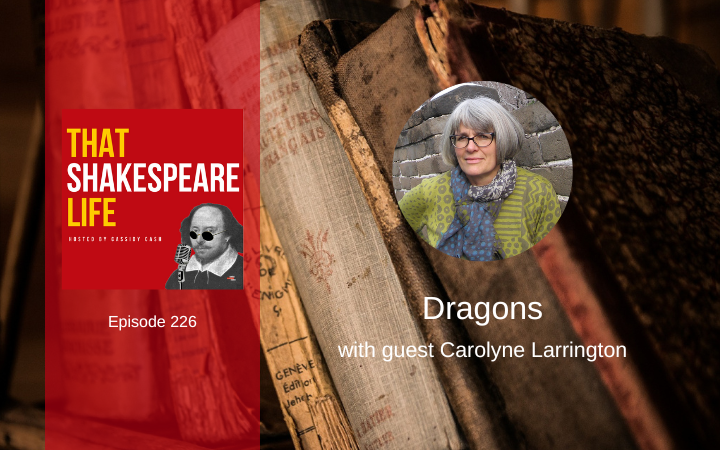 Just like William Shakespeare, our show is supported by patrons. If you enjoy listening to the show and exploring all the history shared on our site, please consider becoming a patron. This website contains affiliate links.

\Welcome to Episode 226 of That Shakespeare Life, the podcast that goes behind the curtain and into the real life and history of William Shakespeare.

When William Shakespeare talks about dragons in his plays, he mentions these creatures as fire-breathing, flying, cave dwelling, night stalking, fearsome fighters in over 20 references across his works. In today’s interview we are going to explore the real history of dragons in Shakespeare’s lifetime by asking whether there were real creatures that could have been defined as dragons, similar to how Rhinoceros and Narwhal were called “unicorns.” Here to share with us the popular legends about dragons and the place of these creatures in the general pop culture mindset of the Elizabethan Era is our guest and author of Dragons and their Origins for English Heritage, Carolyne Larrington.

Subscribe to get the latest episodes in your inbox.

Carolyne Larrington is a Fellow and Tutor in Medieval English at St John’s College, Oxford and Professor of Medieval European Literature at the University of Oxford. She researches widely in Old Norse-Icelandic, medieval, particularly Arthurian literature and medievalism. She is the author of The Land of the Green Man (2015) on place in British folklore, and of Winter is Coming  (2016), a book on Game of Thrones and medieval history. Her 2015 BBC radio 4 series ‘The Lore of the Land’ is still available online. We’ll place a link to this interview as well as more information on Carolyne in today’s show notes. https://www.bbc.co.uk/sounds/play/b068tl6k

I’ll be asking Carolyne Larrington about:

When you sign up for our email list, I will send you 3 pages of this 8-page dragon coloring book FREE. Email subscribers are the first to hear about our latest episodes and get regular freebies just like this one!

Carolyne is featured on a podcast about Dragons as Fire Breathing Beasts here:

There’a great book about dragons called British Dragons by Jacqueline Simpson. At the time of publication, the price for this book was $7.07 for a paperback on Amazon

The Dragon of Wantley is a famous dragon tale about a Knight who fought and killed a dragon at Wharncliffe Crags (known locally as Wantley). The dragon is said to have lived in a den near the Crags and to have been as large as a the Trojan Horse. He ate voraciously, devouring buildings, trees, and anything in its’ path. The Knight managed to kill the dragon by discovering it’s only vulnerable spot, his behind, and going after it with a spiked armour suit and kicking the dragon in its’ “arse-gut” (as the ballad explains).

There’s a fun article on the Dragon of Wantley on Atlas Obscura.

Shellfield Town Hall Features an engraving of the Knight Moore slaying the Dragon of Wantley. The dragon is also mentioned in Sir Walter Scott’s Ivanhoe, and in Charles Dickens’ David Copperfield.

The Wyvern is a dragon popular in European folklore. It also shows up in heraldry and symbolism of North America. Unlike other famous dragons (like the FIre-Drake) the Wyvern cannot breathe fire. It does have wings, but only two legs. It is famously associated with Wales because of Owain Glyndwr who displayed the Wyvern at Twt hill after his successes in reclaiming Welsh territory during the war with the English in the Late Middle Ages. He was the last native born Welshman to hold the title Prince of Wales.

Dragons known as The Fire Drake

The Fire Drake, despite being listed by Wikipedia as the same as a Wyvern (that’s not right), is quite different. The Fire Drake was a four legged, winged, flying, fire breathing dragon that is most closely associated with the image of “Dragon” we think of today in shows like Game of Thrones or movies like Reign of Fire.

“that fire–drake did I hit three times on the head, and three times was his nose discharged against me; he stands there, like a mortar-piece, to blow us.”

Dragons sighted in 793 in Northumbria

The Anglo Saxon Chronicle records an event in 793 when people of Northumbria were terrorized by a dragon (or multiple dragons). Translated to English by the British Library, here’s what the account says about that sighting:

Year 793.
Here were dreadful forewarnings come over the land of Northumbria, and woefully terrified the people: these were amazing sheets of lightning and whirlwinds, and fiery dragons were seen flying in the sky. A great famine soon followed these signs, and shortly after in the same year, on the sixth day before the ides of January, the woeful inroads of heathen men destroyed god’s church in Lindisfarne island by fierce robbery and slaughter. And Sicga died on the eighth day before the calends of March.

This national chronicle, or annual record of events, was originally compiled around 890 during the reign of King Alfred the Great. It was the first attempt to give a systematic year-by-year account of English history, and it was later maintained, and added to, by generations of anonymous scribes until the middle of the 1100s. This version is an 11th-century copy, probably made in Worcester.

The entry on the left for 793 (dccxciii) tells us about the first Viking raid on Lindisfarne, Northumberland, and the omens that preceded it: ‘Here were dreadful forewarnings come over the land of Northumbria, and woefully terrified the people: these were amazing sheets of lightning and whirlwinds, and fiery dragons were seen flying in the sky.’ The Danish and Norwegian Vikings that eventually settled in parts of the north and east introduced many Scandinavian words from their Old Norse language into English, for example the words they, take, dirt, and place names containing thorpe. Source

Dragons as a Symbol of Wales

The national flag of Wales features a dragon as its’ noble symbol. As Carolyne explains in today’s episode, the dragon became a symbol of national pride in Wales as a result of their fierce Independence and respect for the rebellious nature of the dragon.

The story of the red dragon, specifically, comes from a story about Merlin who predicted there was a red and white dragon living in the ground.

There was a King who wanted to build a tower, but every time they made progress on the Tower, an earthquake would rumble at night to knock down the Tower.

After searching for a solution to the problem, the King was advised that he needed to use mortar that included the blood of a man who was not born of a man (or who didn’t have. a father). Merlin, as the son of a demon, fit the necessary requirements. Merlin, upon approach about this issue, told the King about the dragons living beneath the Tower.

When they investigated, the King and his court did find two dragons beneath the tower, a red dragon and a white dragon. The red dragon symbolizes support for England, and during the Tudor monarchy the red dragon was a popular figure for in the English coat of arms. Henry Tudor had a red dragon flag with him as his banner during the Battle of Bosworth, and Elizabeth I had the red dragon featured in her Royal Coat of Arms. Upon Elizabeth’s death, James I replaced the Red Dragon with the Scottish Unicorn, which remains the standard today.

When you sign up for our email list, I will send you 3 pages of this 8-page coloring book FREE just for joining our list. (Email subscribers get weekly episode notifications and monthly freebies just like this one!)

The entire 8-page coloring book is available inside the Digital Downloads Library on Patreon.