Eleanor of Aquitaine with Alison Weir 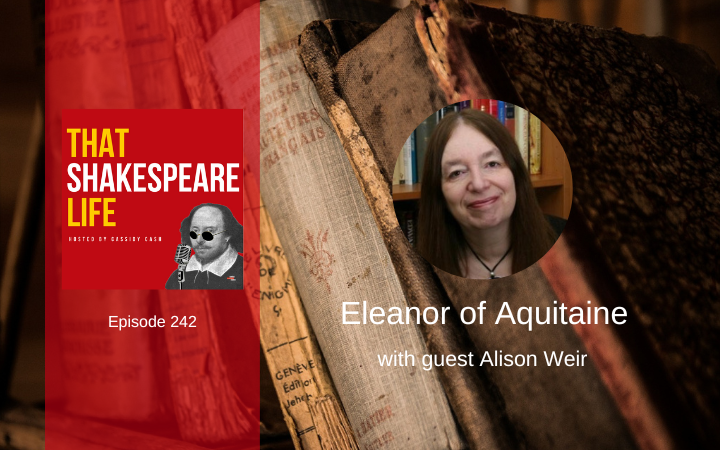 That Shakespeare Life is made available free to listen and without any commercials thanks to the support of listeners like you who sign up to be our patrons. Get inside looks at the making of our show plus special bonus content when you join at patreon.com/thatshakespearelife

In Shakespeare’s play, King John, Eleanor of Aquitaine is portrayed as “Queen Elinor,” who is decrepit and old, but strong willed and highly intelligent. For many Shakespeareans, the real history of this extraordinary woman is confined to this portrayal in Shakespeare’s works. Our guest this week, Alison Weir, joins the show to introduce us to the real history of Eleanor of Aquitaine not only as we remember her today, but to share with us what Shakespeare would have known about her, as well as what it is important to know about her real life when encountering Shakespeare’s portrayal of her in his play.

Alison Weir is a British author and public historian. She primarily writes about the history of English royal women and families, in the form of biographies that explore their historical setting. She has also written numerous works of historical fiction.

Explore her books on Amazon

Travel with Alison on her history tours at AlisonWeirTours.com

I’ll be asking Alison Weir about:

Eleanor of Aquitaine by Alison Weir

“Cousin, look not sad: Thy grandam loves thee; and thy uncle will As dear be to thee as thy father was…”

Eleanor of Aquitaine was Queen of England and France

If you’re new to the history of medieval England and France, you may not immediately recognize the word “Aquitaine” as a specific region of the world. As Alison explains,

[Aquitaine is a] Duchy that occupied much of the south of what is now France. Greatest fifedom in Europe.

“Ay, who doubts that? a will! a wicked will: A woman’s will; a canker’d grandam’s will!”

Eleanor of Aquitaine in Shakespeare’s Plays

In the play, King John, Elinor is portrayed as both decrepit and old, but strong willed and highly intelligent. Alison explains that when you explore the real life of Eleanor of Aquitaine you may have a different opinion of her than what Shakespeare portrays.

Cankered Grand dame is not adequate. She emerged at the age of 65, at a time when women’s life expectancy was around 30, and she started ruling England at this age.

She married Henry of Anjou in defiance of the Pope and her life is marred with scandals, affairs, and rumors of trouble. Despite such rampant turmoil (that really does give Henry VIII a run for his money), Alison writes that it was rare for a woman to exercise the kind of political power Eleanor wielded, and even more incredible by the life she led.

“Grandam, I will not wish thy fortunes thrive.”

England and France are not united as Shakespeare is writing about the Angevin history in his play, King John. The political climate was completely different during Shakespeare’s lifetime. The reception of Eleanor of Aquitaine was based much more on the legends circulating at the time than on the subsequent historical research that’s been done in the interim.

Many in England held that Rosamund de Clifford was the mistress of Henry Anjou during his marriage to Eleanor of Aquitaine. and that Eleanor has Rosamund murdered in revenge. For Shakespeare’s audiences, these stories are factual.