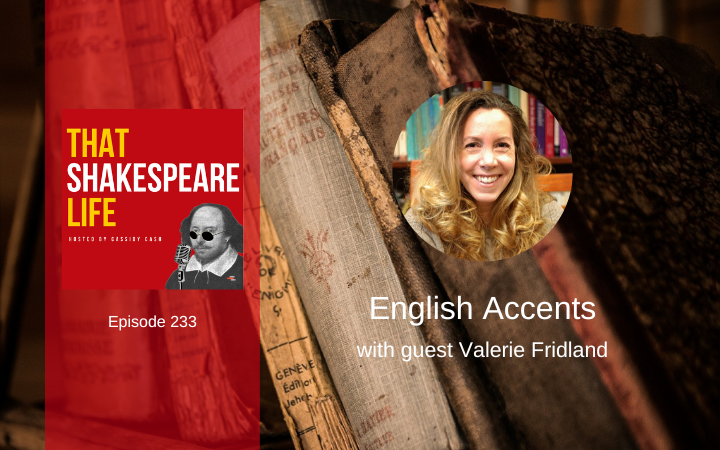 One of the most common issues with Shakespare’s plays is understanding the language. He used not only words that have fallen out of fashion for today’s English language, but the pronunciation and even colloquial expressions, cultural references, and some jokes we find in the plays are all so far removed from the way we talk today that it can be hard to understand what’s going on, especially if you’re just trying to read the plays instead of seeing them performed. At least in the theater you have context clues to help you. If you are also someone who finds Shakespeare’s language hard to follow, then not only are you in good company, but this is the episode for you. It’s true that Shakespeare’s language is difficult, and it turns out the history of linguistics and the development of the English language can explain why. During Shakespeare’s lifetime is when English went through a major change called the Great Vowel Shift, and was being influenced by key events going on at the time. Here today to share with us how languages grow, and explain some of the phrases, words, and even pronunciation that was unique to English for Shakespeare’s lifetime, is our guest and professor of linguistics in the English department at University of Nevada, Reno, Valerie Fridland.

If you enjoy the show, please let us know about it by leaving a comment and a rating on the platform you’re listening from today.

Dr. Valerie Fridland is a professor of sociolinguistics and the former director of English graduate studies at the University of Nevada in Reno. Studying the science and culture behind the way we speak, her work receives support from both the National Endowment for the Humanities and the National Science Foundation. She writes regularly for the popular Grammar Girl podcast and contributes a monthly blog on language to Psychology Today.  Her new book, Like Literally, Dude! Arguing for the good in ‘bad’ English, uncovers the surprising history and purpose behind all the speech habits we love to hate and is available for pre-order with Viking/Penguin Press.   You can also sometimes catch her appearing on The Lisa Show, the Every Little Thing podcast, CBS news, The Nation and Newsy’s The Why.

I’ll be asking Valerie Fridland about:

For more specific details on language change during the era, including a section on Shakespeare’s role as a neologist:

You might also enjoy That Shakespeare Life’s interviews with David and Ben Crystal. They both demonstrate OP (Original Pronunciation) in their interviews:

How Shakespeare Sounded with David Crystal

“Your accent is something finer than you could purchase in so removed a dwelling.”

There were 5 definable accents in Shakespeare’s lifetime

do not take His rougher accents for malicious sounds…

During Shakespeare’s lifetime, the variance in dialect shows up in the plays of the bard when he often uses various accents to make fun of characters or events on stage.

“By Shakespeare’s time, London had risen. It was the cultural capitol, the economic capitol, the country capitol and it was the place to sound like. That East Midland dialect had turned into “the” dialect to know, which was similar to the Southern English dialect. The big differences in Shakespeare’s time would be between North, West Country, and Southern British. He also used other regional dialect. King Lear, Edgar dressed as a country man, he uses a West Country accents. So Shakespeare was aware of the accents and even used them to comedic effect.”

Shakespeare’s lifetime experience a huge change in the way English was pronounced, due to what linguists call The Great Vowel Shift. Valerie outlines the way that Shakespeare would have spoken would have had a very different pronunciation from his predecessors, a fact which the bard would utilize for comedy in his plays.

Shakespearean [English] would have sounded like in Northern British speakers more than Southern today.

The letter “k” dropped off around the 15th century and some people would have stuck it in there to sound scholarly when the archaic pronunciation was fashionable.

Shakespeare makes fun of sticking h’s in everywhere. He was aware the k was pronounced in Chaucer’s sound, but he wouldn’t have said it. The “blegh” response that exists in many germanic languages have dissipated in English over time. At the time Shakespeare wrote, some people stuck it in there, but it was considered archaic and only done to be pretentious not as a matter of course.

“Will you mock at an ancient tradition, begun upon an honourable respect, and worn as a memorable trophy of predeceased valour and dare not avouch in your deeds any of your words? I have seen you gleeking and galling at this gentleman twice or thrice. You thought, because he could not speak English in the native garb, he could not therefore handle an English cudgel: you find it otherwise; and henceforth let a Welsh correction teach you a good English condition. Fare ye well.”

The English Accent as a Status Symbol

During Shakespeare’s lifetime, exactly how you pronounced certain words, or even indeed, the certain words, that you used (or didn’t use) marked you immediately as having a certain class in society. For this reason, some people rather overdid it with their polite speech to the point that exaggeration was humorous.

All the social upheaval and cool new things influence how we talk and Shakespeare as no different, except that there was a great deal more turmoil in his life compared to ours. Shakespeare is actually a great example of someone whose work allows us to see into the period and what was going on. One of the big things that was happening was that English was just emerging as a language on its’ own two feet. Up to then English was the language of the common people. 200 years prior, the language was French at court. Latin was influential before that. French was massively influential as a powerful prestige language and finally during Shakespeare’s lifetime, the first time ever, English is a language to write, speak, and learn in.

One of the ways we see it in his works is not just his inventive language and new words, but also the discomfort his characters have with the way they are speaking. There was a lot of instability in the social structure and they could be more socially mobile than they could in previous years, through trade and economic exchange rather than being born to it and language was the primary way to declare social status. Which is ways we Shakespeare using language to make fun of people or having people be overly polite and use a lot of titles. You showed your courtly status through language…

“Go, write it in a martial hand; be curst and brief; it is no matter how witty, so it be eloquent and fun of invention: taunt him with the licence of ink: if thou thou’st him some thrice, it shall not be amiss…”

The Difference Between Thee, Thou, and You

We do not use “thee” and “thou” in common speech today, but it’s all over Shakespeare’s works. Valerie explains how thee and thou were used in Shakespeare’s lifetime:

Thee and Thou are perfect examples of how we don’t understand half the jabs Shakespeare writes because we don’t know the history of pronouns. They changed between Old English and the Shakespearean time. Major shift.

GO back to old english and early model english, the difference between Thou, Thee, ye, and you, was about whether it was singular or plural. If it was singular You, you used Thou as the subject of a sentence or Thee, if you talked to “you all” then “you” was plural, and “ye” was the subject position for a group of people. So Thou/Thee was subject/object, and the thou/thee

THEN ENTER THE FRENCH

The French introduced norms of polite society and ruling the court and the French have tu/vous, and it seems like it’s

Tu among intimates or people who have less power than you.

Vous us a polite/formal form, or someone in authority or higher rank than you.

This was brought into English and updated their pronouns.

Thou– if you wanted to speak to someone intimate or lower than you.

Ye–it started to become You used this way as “ye” fell out of use. If you wanted to speak of someone higher status, you used “You.” Rather than most people being Thou as common people and only status/rank being You, by 1400/1500, because inability to tell who had what rank, to avoid insulting anyone who might have a higher rank, they started calling people “you” more commonly, so everyone was called You unless it was a spouse/lover or children. And you might still refer to a servant as thou but if you cared about them, you used Thou, or you used it as an insult. Thou calls him thou thriced.

Shakespeare uses Thou as an insult.