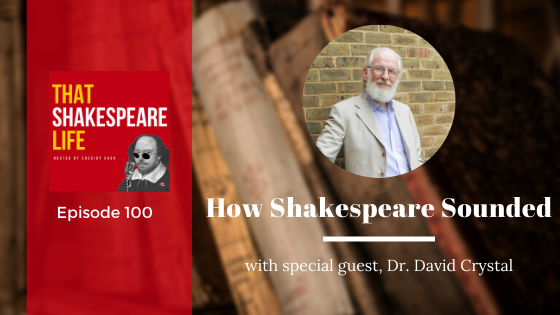 Hello! This a preview of what\'s inside this patrons-only post.  Explore the way Shakespeare would have pronounced words during his lifetime with expert linguist, David Crystal.
One of the ways we fund the podcast is through affiliate links. If you purchase these items through our links, we make a commission. This post, and all the posts here on our website, may contain such affiliate links. To contribute to our show directly, consider becoming a member, subscribing to our app, or buying Shakespeare swag from our shop.   Welcome to Episode #100 of That Shakespeare Life, the podcast that takes you behind the curtain and into the life of William Shakespeare. You say toh-may-toe, I’ll say Tah-mah-toe. You say poe-tay-to, I’ll say pah-tah-toe. You may or may not recognize the lyrics to this cute folk song, but I’m certain that you’ve encountered someone who pronounces everyday words with a different emphasis than what you’re used to. During the 16th century, William Shakespeare had his own way of pronouncing words as well, and exploring how to define what that pronunciation was, and how it impacts our understanding of the plays, is a special field of historical linguistics called Original Pronunciation. Our guest this week, Dr. David Crystal is the leading expert in the field of Original Pronunciation and he joins us this week to talk about how an experiment he lead at The Globe theater in London taught everyone involved how important understanding the spoken language is to understanding Shakespeare’s plays. The Globe in London is known the world over for its focus on original practice–which is where they use props and performance techniques that are as close as you can get to recreating what Shakespeare himself would have used on stage. Despite that intense and expertly researched focus at The Globe, David’s experiment was the first time in 50 years anyone had approached a Shakespeare production under original practice conditions that included original pronunciation as well. The results of this experiment were pretty stunning and brought to light some exciting aspects about the life of William Shakespeare. We are delighted that David has agreed to meet with us today to share the inside story behind his latest book, Pronouncing Shakespeare, which details this experiment and what it taught him about the life of William Shakespeare.
Join the conversation below.
Subscribe Itunes | Stitcher | TuneIn | GooglePlay | iHeartRadio 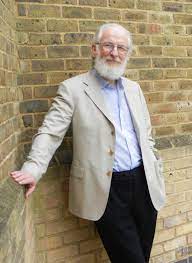 David Crystal was born in 1941 and spent the early years of his life in Holyhead, North Wales. He went to St Mary’s College, Liverpool, and then University College London, where he read English, and obtained his Ph.D. in 1966. He became a lecturer in linguistics at University College, Bangor, and from 1965 to 1985 was at the University of Reading, where he became Professor of Linguistic Science. He's now Honorary Professor of Linguistics at the University of Wales, Bangor. In 1995 he was awarded the OBE for services to the English language, and he became a fellow of the British Academy in 2000. He's published over a hundred books, including The Stories of English (2004) and The Cambridge Encyclopedia of the English Language (3rd edn, 2018). Since 1997 he wrote a regular article on Shakespeare's innovative vocabulary for Around the Globe, the magazine of Shakespeare's Globe, and was Sam Wanamaker Fellow at the Globe in 2003. He's written several essays on Shakespeare's language, including introductions for the Wells & Taylor Complete Works (OUP 2005), Wells and Orlin's Shakespeare: an Oxford Guide (2003), and Bruce Smith's Cambridge Guide to the Worlds of Shakespeare (2016). Apart from Shakespeare's Words, his book-length publications are Think on my Words: Exploring Shakespeare's Language (2008), and two collaborations with Ben: The Shakespeare Miscellany (2005) and The Oxford Illustrated Shakespeare Dictionary (2015). In recent years David has become specifically associated with the movement to present Shakespeare in original pronunciation (OP). He was Master of Original Pronunciation at Shakespeare's Globe in 2004 for its production of Romeo and Juliet, and has since collaborated with theatre companies in several countries in OP productions of over a dozen Shakespeare plays, as well as works by Marlowe and Henslowe. The story of the first production is told in Pronouncing Shakespeare (2005, updated edition 2018), and the general approach is presented in The Oxford Dictionary of Original Shakespearean Pronunciation, with a linked audio file (2016). A complete list of his writing and fuller bio can be found on his website: www.davidcrystal.com

In this episode, I’ll be asking David Crystal about :

Online community for those interested in OP: www.originalpronunciation.com Shakespeare's Words: A searchable online database of all of the words in Shakespeare's works. www.shakespeareswords.com

Please consider rating the podcast with 5 stars and leaving a one- or two-sentence review in iTunes or on Stitcher.  Rating the podcast helps tremendously with bringing the podcast to the attention of others. You can tell your friends on Twitter about your love of Shakespeare and our new podcast by simply clicking this link and sharing the tweet you’ll find at the other end. And, by all means, if you know someone you think would love to learn about the life of William Shakespeare, please spread the word by using the share buttons on this page. And remember: In order to really know William Shakespeare, you have to go behind the curtain, and into That Shakespeare Life.
To view this content, you must be a member of Cassidy's Patreon at $5 or more