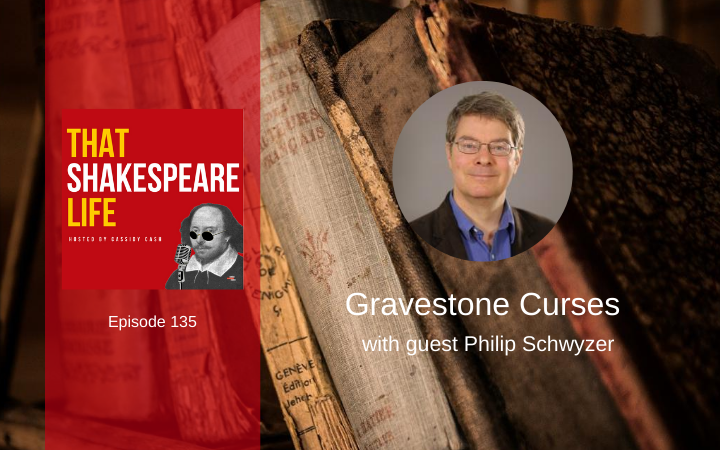 Welcome to Episode #135 of That Shakespeare Life, the podcast that takes you behind the curtain and into the life of William Shakespeare.

When William Shakespeare died, he left on his gravestone a formidable curse, warning anyone who dared steal his bones after death. You can see this curse today on his gravestone inside Holy Trinity Church and it reads

To dig the dust enclosed here

Blessed be the man who spares these stones

And cursed be he that moves my bones.

Sinister, and comical today when grave robbing seems like a far fetched idea, for the 17th century when Shakespeare was buried, stealing someone’s bones comes up alot! But how effective were these curses at deterring the theft of the graves? To explore the history of grave robbing,the rumors that someone could have stolen Shakespeare’s skull, as well as to explain the tradition of gravestone curses in Elizabethan England, we turn to Shakespeare expert and professor of English at the University of Exeter, Philip Schwyzer. 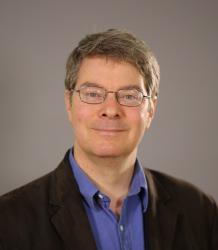 Philip Schwyzer is Professor of Renaissance Literature at the University of Exeter. He is the author of studies including Shakespeare and the Remains of Richard III (2013), Archaeologies of English Renaissance Literature (2007), and Literature, Nationalism and Memory in Early Modern England and Wales. His research interests include death, memory, maps, and monuments in Shakespeare’s England.

In this episode, I’ll be asking Philip Schwyzer about :

Oft have I digg'd up dead men from their graves,
And set them upright at their dear friends' doors
Aaron 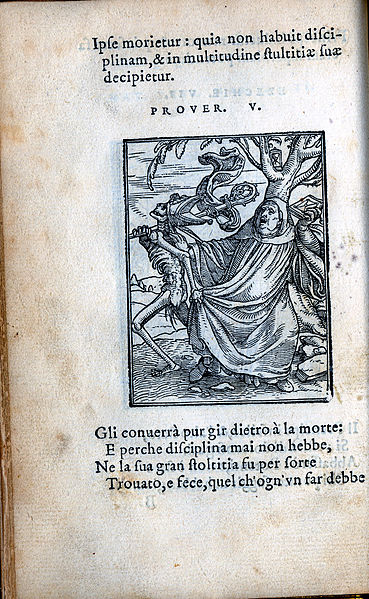 Grave Robbing Was Not Popular, But Graves Were Moved

Grave robbing in the sense we associate with 18-19th century murder mysteries had not become as significant of an occurence in England as would blossom in the days of Sherlock Holmes, for example. However, there was sufficient enough instance of relocating or removing bodies that many supersitions around graves being disturbed, or bodies moving from their final resting places, were rampant. Philip explains,

[Grave Robbing was not popular] in the way we are familiar with it from the 18-19th century (To supply fresh corpses for surgeons to dissect) but other circumstances required removing bodies from graves. Country churches, dispute over priority over the church space. Court cases that reference these instances.

In the 16th c post reformation there’s a sad number of cases where bodies are exhumed and abused as part of reformation controversy (Catholic saints dug up and desecrated), Queen Mary restores catholicism, Protestants were similarly exhumed and destroyed. Solution: Oxford, Christ Church Cathedral, mingled the bones of the saints with the bones of Catholics and Protestants together, so no one could tell which bones were the “wrong” ones.

[While] Shakespeare would have grown up hearing stories about these (Thomas Beckett, examples), no reason why he would have been worried about his personal ones being stolen. 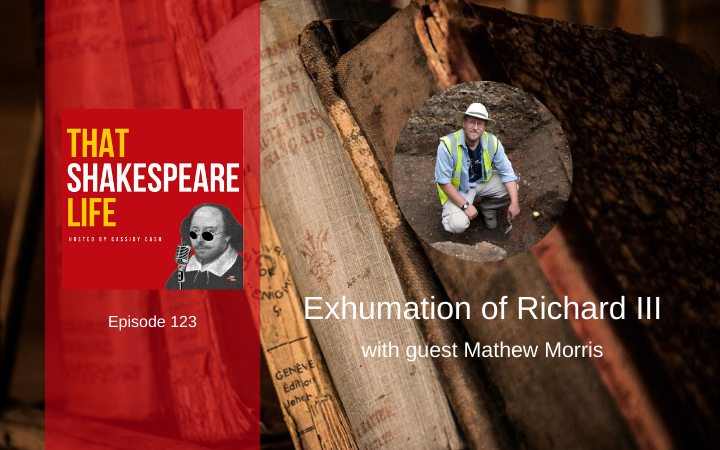 “I'll follow, sir. But first, an't please the gods,
I'll hide my master from the flies, as deep
As these poor pickaxes can dig”
Imogen 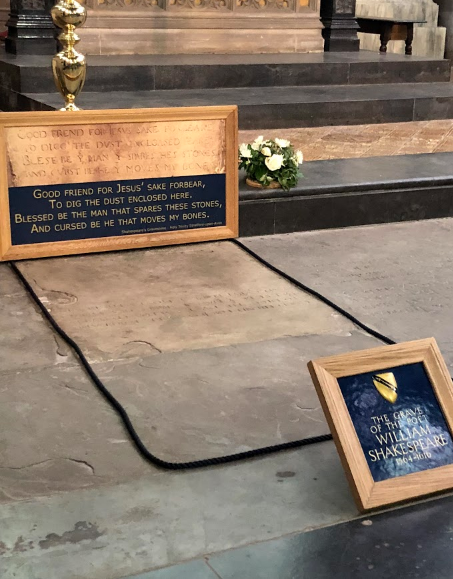 Photograph of the grave of William Shakespeare inside Holy Trinity Church in Stratford Upon Avon, England. Shakespeare's curse is carved into the stone on top of the grave, and the placquard at the back (framed in wood here) is provided to explain the curse's words for visitors. Photo taken by Cassidy Cash, 2018, All Rights Reserved. (You can share the image, just link back to this blog post and tag me as the author.)

CounterCultural to Include a Curse

One thing you will notice upon a visit to Shakespeare's grave is that none of the other graves alongside the bard have curses upon them. As Philip explains this week, the use of a curse “Was not traditional at all. Curses on gravestones are anything but conventional when Shakespeare had one placed on his grave. Comes from 1676 (60 years post Shakespeare, and almost a word for word quote of Shakespeare’s gravestone) not evidence of local tradition.”

Despite not having a local tradition for gravestone curses, and Shakespeare standing out as significantly deviating from traditional gravestone decoration to provide specifically for a curse on his own, Philip shares that there was at least some precedent for warning someone of damaging a monument or grave.

“Occasional examples of inscriptions warnings for someone who damages a monument. Not the same as a gravestone curse, because damage is a crime, whereas the normal movement of care for graves seems normal, so [it was] odd for Shakespeare to warn off that movement as well and so specifically.”

Get started today!
So shall no foot upon the churchyard tread,
Being loose, unfirm, with digging up of graves,
Paris 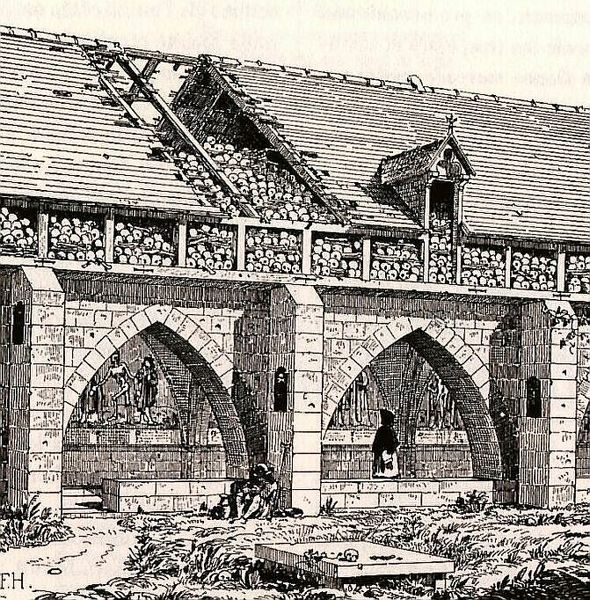 Charnel house at the Saints Innocents Cemetery, Paris. The mural of a Danse Macabre is visible at the wall. | Public Domain | Source

It was common in England, in particular, for graves to be re-opened at some point after the initial burial to make room for additional bodies to be buried in the same location, due primarily to an overall lack of ground space in England. This multi-person grave site practice even shows up in Shakespeare’s Hamlet as the skull of poor Yorrick is uncovered whilst the gravedigger is preparing Ophelia’s burial place.

Yes, very normal practice. Reinterrnment at a charnel house, when now anonymous bones were dug up to make room for new graves. After [the] Reformation it was not considered appropriate to pray for the dead. [For] Protestant England, digging up bones became a practice to toss away the old ones (even [used for] fertilizer) to make room for new [bodies]. [We see] fashion for coffins in this period to ward off that threat, interesting Shakespeare chose a curse instead of a coffin to prevent his fate.

Despite the religious foundation of England, unlike many modern Protestants today, it seems the Protestants of England were not typically concerned with their bodies being disturbed after death (as a rule. Obviously, Shakespeare is an exception). Philip explains that from a religious perspective,

Christians in Shakespeare’s day were assured God would find them and all their body parts no matter where they ended up (or what condition) John Donne writes about this extensively “legions of angels…recollection scattered dust…” remind us no way escape to be turned into dust, mingled with everyone else, and finds celebration/comfort in community of dust that Christ can recollect. Shakespeare clearly wanted to keep his dust. “Dust enclosed here.” 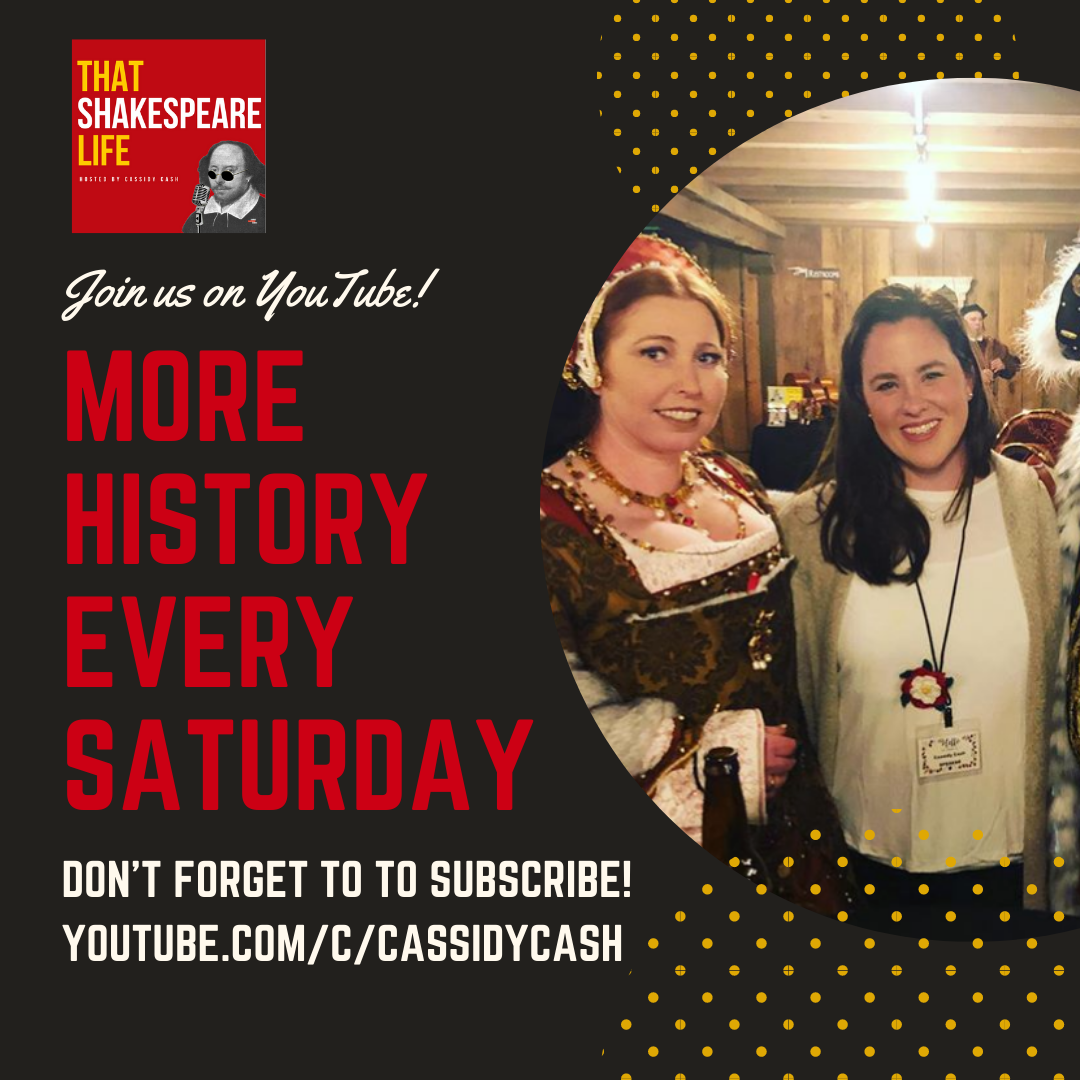 Be gentle grave unto me!
Cleopatra 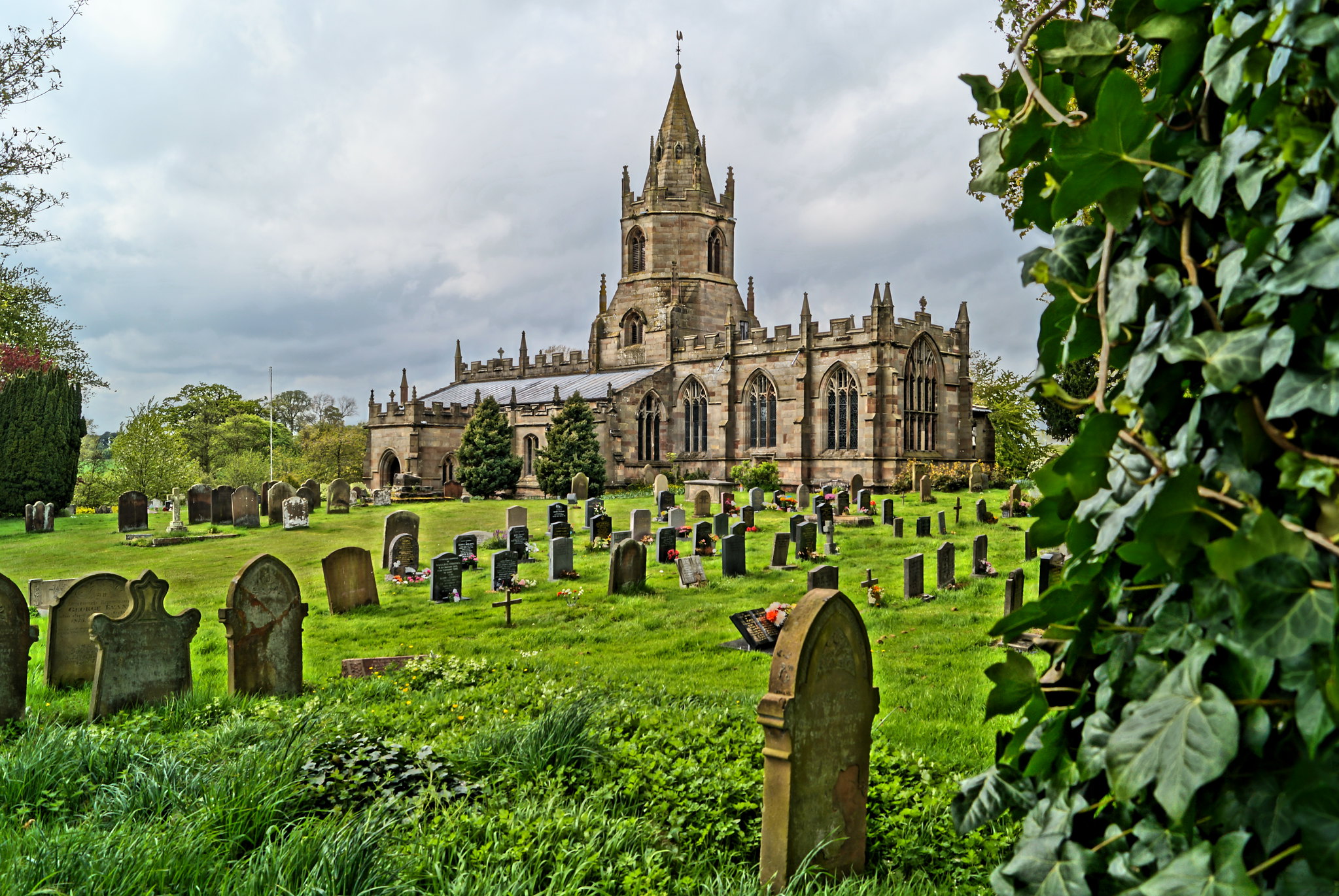 St Bartholomew's Church, Tong, Shropshire | Where the grave of Sir Thomas Stanley and his wife can be found, upon which an epitaph written by Shakespeare for the Stanley family, can be found. | Photograph by Jonathan Stonehouse May 10, 2015 | Source | used under Creative Commons Attribution License 2.0

Shakespeare's gravestone curse started something of a trend that would take hold later in the 17th century where it was much more common to not only include a curse on your gravestone, but Philip shares that “To copy Shakespeare’s curse is quite common. To state his works will be his monument is a common sentiment, and sometimes takes a warning or provocation to someone who might want to damage or investigate the tomb.”

In addition to starting a trend, it seems prior to his death Shakespeare was already in the epitaph business. He is said to have written an epitaph for the Combe family, as well as for the Stanley family. Philip shares,

“Shakespeare is said to have written a epitaph for the Stanley family “memory of him for who mthis stands, shall outlive marble and defacers hands” taunt, because you can destroy this grave, but not his legacy.”

Not monumentall stones preserves our Fame;
Nor sky-aspiring Piramides our name;
The memory of him for whom this standes
Shall out live marble and defacers hands
When all to times consumption shall bee given,
Standly for whom this stands shall stand in heaven.

The following lines appear on the east end of the tomb:

Idem, ibidem
Ask who lies heere but doe not wheepe;
Hee is not deade; Hee doth but sleepe;
This stony Register is for his bones,
His fame is more perpetuall, then these stones,
And his owne goodnesse wth him selfe being gone,
Shall live when earthly monument is nonne.

qtd from this source

You can see the Stanley grave and epitaph written by Shakespeare at the momument for Sir Thomas Stanley and his wife, at St. Bartholomew's Church, Tong.  Learn more about the church here at this article, and if you would like to see pictures of the tomb, fellow Shakespeare blogger, Sylvia Morris, shares images on her website here.

The Church Monuments Society website, and especially their “Monument of the Month” feature: https://churchmonumentssociety.org/monument-of-the-month. [At different times both Shakespeare’s grave slab and his wall memorial have been Monument of the Month, and there are endless fascinating memorials to be discovered there.]

Have the latest updates sent right to your inbox every Monday, where you can start your week off with Shakespeare!

I'll send you this diagram of The Globe Theater to welcome you.