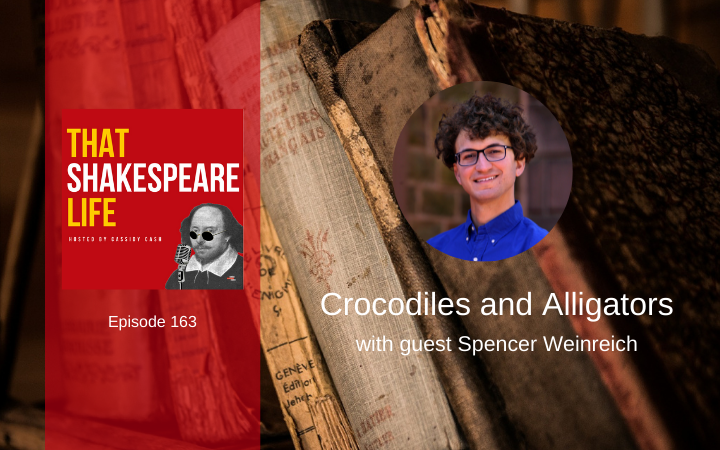 One of the ways we fund the podcast is through affiliate links. If you purchase these items through our links, we make a commission that goes towards podcast operations. This post, and all the posts here on our website, may contain such affiliate links. The video version of today’s podcast is available inside our digital streaming app.

Shakespeare mentions the word “crocodile” five times in his plays, but crocodiles not being native to England must have been introduced to the bard from outside his natural habitat there in London. The crocodile itself was well known in English literature, having been written about in association with Egypt and Africa by writers like Pliny the Elder centuries prior to Shakespeare. This particular beast was brought back to the forefront of popular imagination during Shakespeare’s lifetime, however, when explorers to the New World came home with stories of a new creature similar to the crocodile and unique to North America named the alligator. The alligator is mentioned only once in Shakespeare’s works in Act V Scene 1 of Romeo and Juliet where it is included on a list of items on display in an apothecary shop. That reference is particularly interesting when you consider that a display of natural specimens in an apothecary shop is very likely one of the real places Shakespeare himself might have encountered one. Here to take us back to the mid 1590s as Shakespeare wrote about the alligator in Romeo and Juliet and explain for us what 16th century science believed about the alligator/crocodile is our guest, Spencer Weinreich.

In this episode, I’ll be asking Spencer Weinreich about: 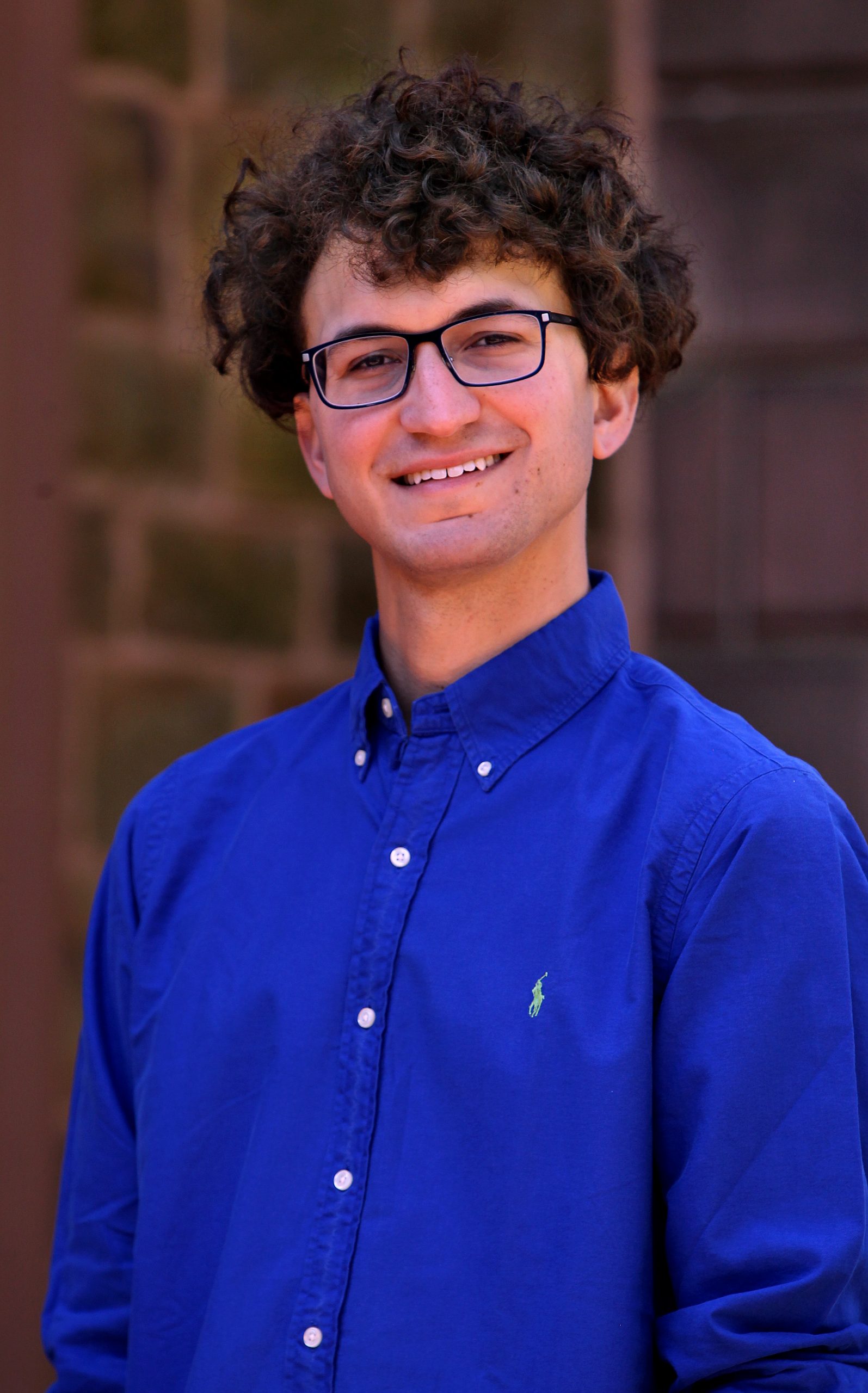 Spencer J. Weinreich is a Ph.D. candidate in the history of science at Princeton University, writing a dissertation on the history of solitary confinement. His scholarship on early modern religion, natural philosophy, and historiography has appeared in Early Science and Medicine, Journal of Ecclesiastical History, Social History of Medicine, Journal of the History of Ideas, History Workshop Journal, and Renaissance Quarterly, among others.

Watch the Video Version of our Show Inside the App! 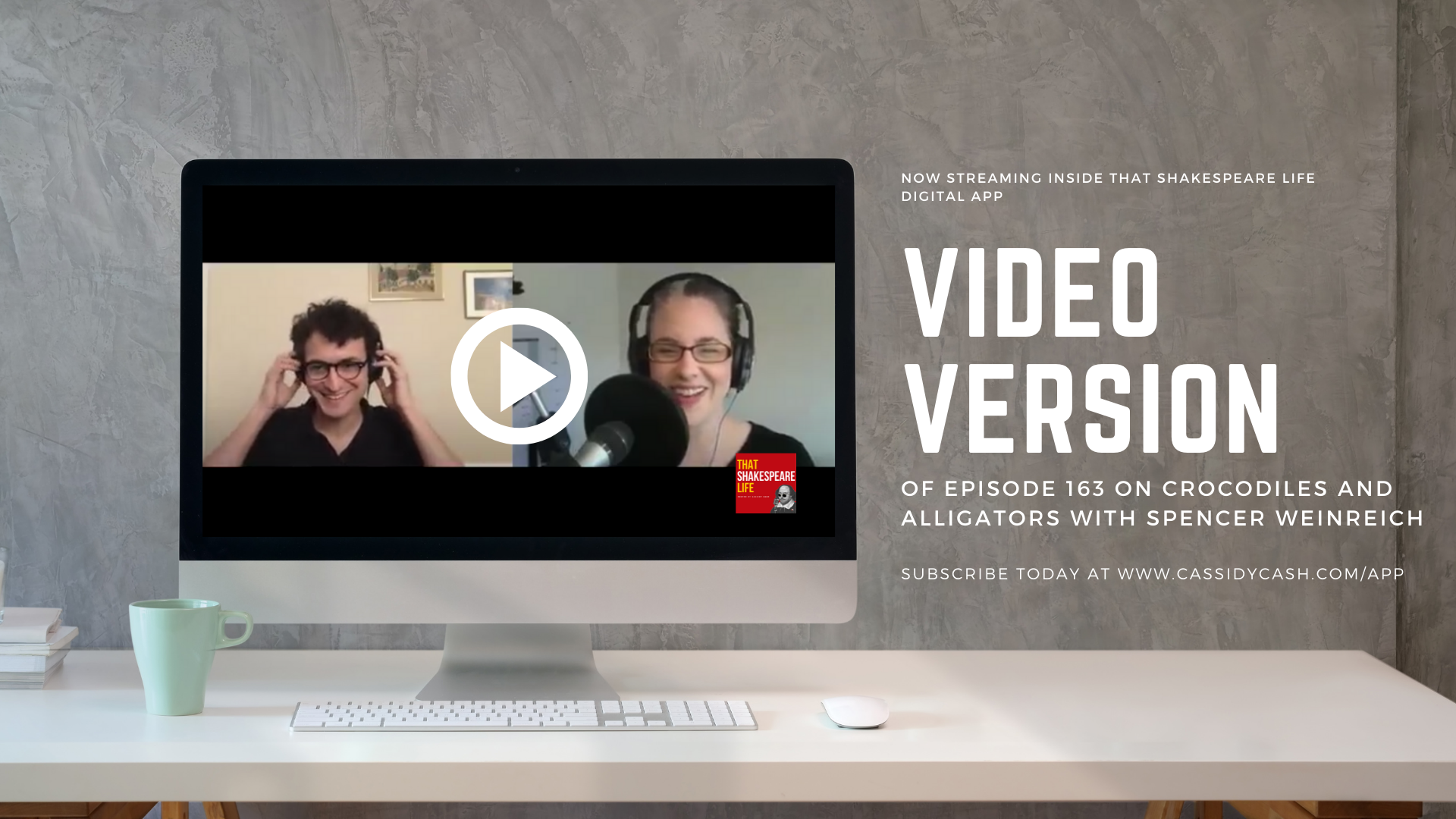 All Shakespeare all the time! Packed with documentaries, animated plays, bonus interviews, and more, the app is the best little Shakespeare club ever. Watch our documentary, The Art of the Sword, about fencing masters in Shakespeare’s England FREE when you sign up for the 14 day free trial.
GET IT NOW

What manner o’ thing is your crocodile?

This woodcut is an illustration from page 682 of the book “The History of four-footed beasts and serpents” by Edward Topsell, printed by E. Cotes for G. Sawbridge, T. Williams and T. Johnson in London, 1658. Original Source. Public Domain

Crocodile Exploration and Lack of Taxonomy

Elizabethan England was overrun with exploration bringing rare and exotic animals back to England as samples of the exploits overseas. As Spencer points out in this week’s episode, the

“Elizabethan world is not as rigidly taxonomized as ours is. Shakespeare hasn’t read Linnaeus. It’s not that early modern observers don’t categorize—they’re simply mad about categories—but they have different ways of dividing up the world.”

This means that the understanding of wild animals, and particularly exotic animals not native to Britain, had a wide berth. For example, toads were thought to have diamonds in the middle of their head and garlic could neutralize a magnet. The natural world was an enigma to much of Shakespeare’s contemparies.

When it comes to understanding exactly what a crocodile was, by definition, one man named Edward Topsell (a naturalist) gave a surprisingly accurate –though not completely so—description:

It’s a serpent, which the English naturalist Edward Topsell defines this way: “all venomous Beasts, whether creeping without legges, as Adders and Snakes, or with legges, as Crocodiles and Lizards, or more neerely compacted bodies, as Toades, Spiders and Bees.” Topsell gives a rich account of the crocodile, which he describes as “like a Lizard in all points (excepting the tail, and the quantity of a Lizard)”, which is to say it’s much bigger. ..He goes into all sorts of physical detail—a nose resembling a pig’s, impenetrable hides, ravenous appetite, lots of teeth but no tongue—as well as behavior and relations with other sorts of creature and the long tradition of lore and scholarship stretching back to Ancient Greece. Similar information would have been available in any number of other works of natural history, as well as countless illustrations and other images of crocodiles: some of them fanciful, to be sure, but others intricately detailed and stunningly accurate. So Shakespeare has a wealth of information at his fingertips about what crocodiles look like, how they act, where they come from, and what the finest minds of the last three millennia have known about them. Plus he’s probably seen preserved specimens, in whole or in part. 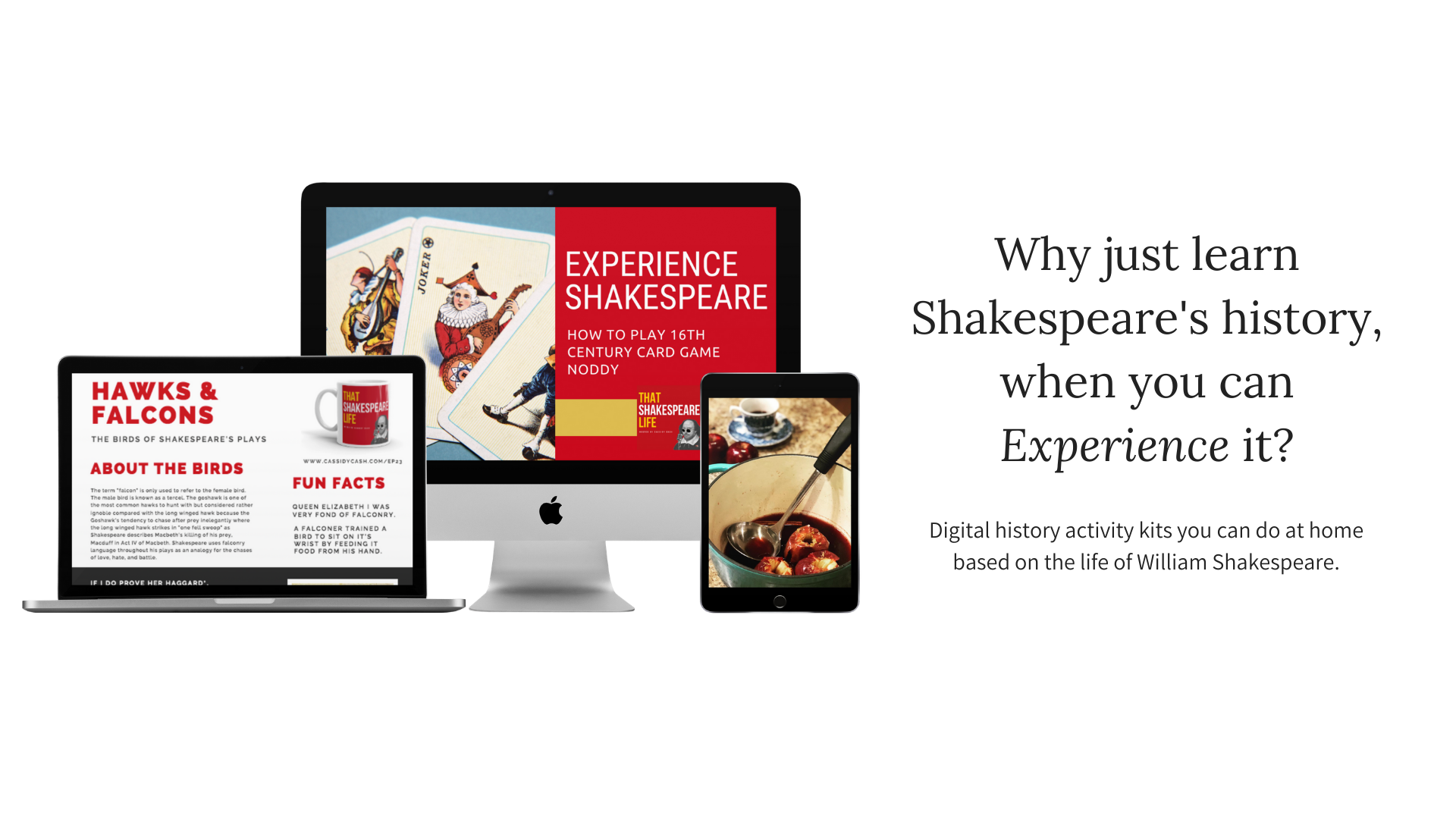 Henry my lord is cold in great affairs,
Too full of foolish pity, and Gloucester’s show
Beguiles him as the mournful crocodile
With sorrow snares relenting passengers 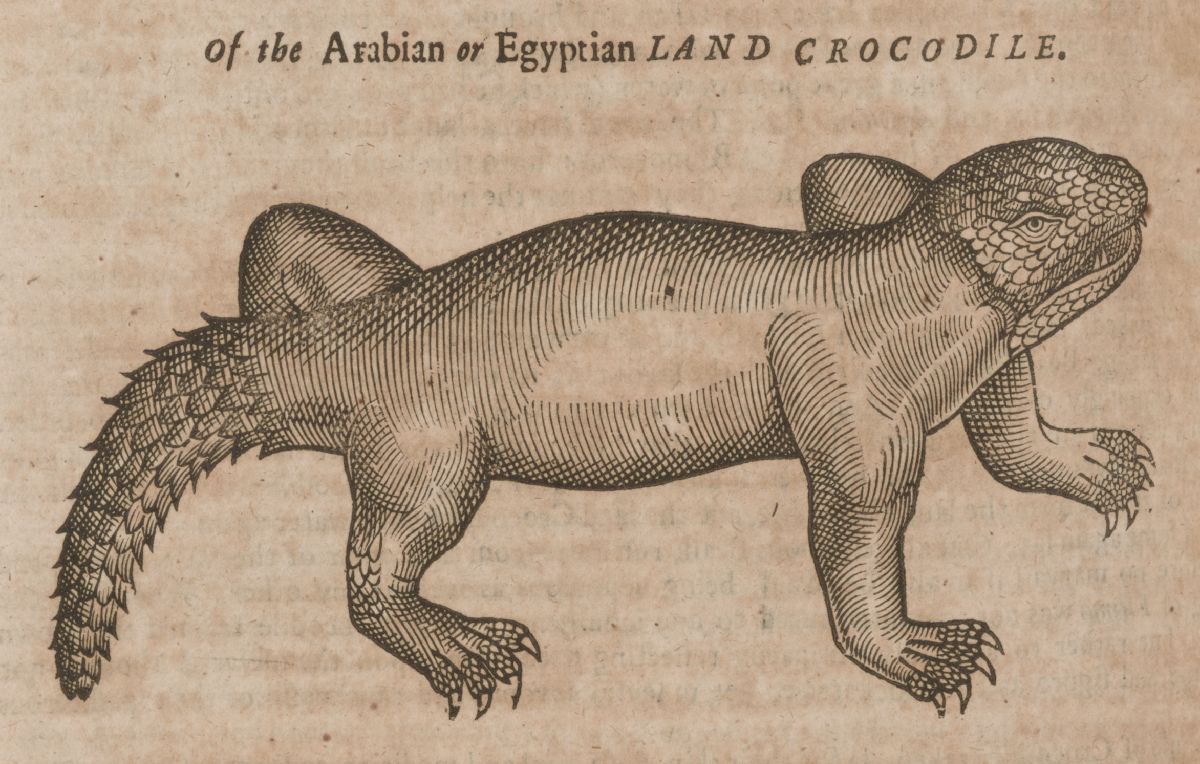 This woodcut is an illustration from page 692 of the book “The History of four-footed beasts and serpents” by Edward Topsell, printed by E. Cotes for G. Sawbridge, T. Williams and T. Johnson in London, 1658. Original Source. Public Domain

The New World consistently surprised Britain with the new and wondrous things to be found in North and South America. As Spencer points out,

Alligators are usually surprising. You have to put yourself in the boots of a European explorer or colonizer, wandering through an unfamiliar and uncharted landscape, with trees and birds and other things you don’t recognize, when all of a sudden there’s something big in the water with eyes and scales and a hell of a lot of teeth. Even if you’ve read all about crocodiles in the Old World, even if you’ve seen one before—which most would not have, at least not alive and biting—that’s pretty shocking…There are stories of alligators in South America growing to a hundred feet in length. European missionaries report of non-Christian indigenous peoples who worship and/or eat them. They’re just the sort of monster you expect to find in an uncharted continent…Everywhere there are strange and wondrous people and things, from the extraordinary empires of the Inca and the Aztecs to macaws and tomatoes.So the alligator lurks in the midst of all this strangeness, and arguments over what it is, how it got there, and how it relates to a similar-looking beast back in Egypt or India, are part of a much, much bigger process of Europe making sense of the Americas.

And in his needy shop a tortoise hung,
An alligator stuff’d, and other skins
Of ill-shaped fishes; 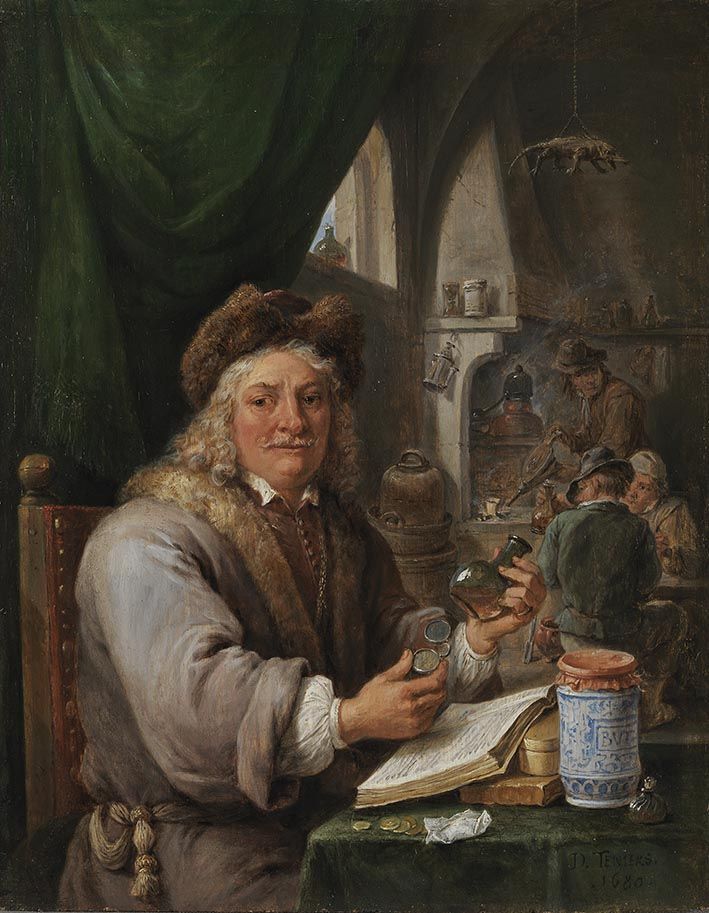 1680 Self portrait. David Teniers the Younger, working in an alchemist studio (also known as an apothecary shop). He has an alligator hanging from the ceiling in the background. Original Source. Public Domain

…the early modern period saw a roaring trade in fabulous creatures, some of them alive, some of them preserved, some of them skeletal, and some of them fabricated. London merchants were in regular contact with parts of the world where crocodilians could be found—the American tropics, North and West Africa, South Asia—and it was just the sort of curiosity liable to fetch a good price back home. One thinks of the line in The Tempest about England’s taste for monsters—“any strange beast there makes a man.” And because England does more trade with the Americas than with Egypt or India, it’s more likely to have been a New World alligator than an Old World crocodile. Perhaps more importantly, a stuffed alligator or crocodile was becoming part of the image of the apothecary’s shop, part of the standard equipment, at least in the imagination of Shakespeare’s audience, because they’re part of the cabinet of curiosity, the collection of weird and wonderful stuff that a learned person has. The cabinets are proto-museums, they’re places of display, but they’re also workshops, places where study and craft is carried on.

Learn More on the History of Crocodiles inside the app.

Spencer mentions several additional instances of crocodiles or alligators showing up in England during (or just tangential to) Shakespeare’s lifetime in this interview. Listen to the full podcast for all the details. You can also see many of the images of crocodiles on display in churches, other 16-17th century paintings of crocodiles and alligators in apothecary shops, as well as links to popular folk tales related to dragaons/crocodiles from Shakespeare’s lifetime like St. George the Great, The Lambton Worm, and the Hellmouth Leviathan in the fresco “The Last Judgment” painted by Giacomo Rossignolo (1524-1604), plus even more that’s too much to list here, all packed into the video version of today’s episode. You can watch the first part of the video version on YouTube. The full video version and a printable ebook featuring these archival images and citations for the research sources related to today’s episode is inside the digital streaming app for That Shakespeare Life.

Web articles (these are all published in academic journals. Where I was able to find them, I have listed a free pdf version linked here. Your local library can help you get a free pdf version to read if you do not have access to these online journals. Just show the librarian the citation provided here.)

The Medieval Bestiary online. bestiary.ca online resource that collects the classical and medieval lore surrounding the animals of the medieval bestiary, including an excellent entry on crocodiles.

Spencer recommends one section of this book related to crocodiles, a chapter by Joseph Campana, “Crocodile Tears: Affective Fallacies Old and New,” found on pg. 129–52. This book is available online here (or on amazon by clicking the book image shown above) 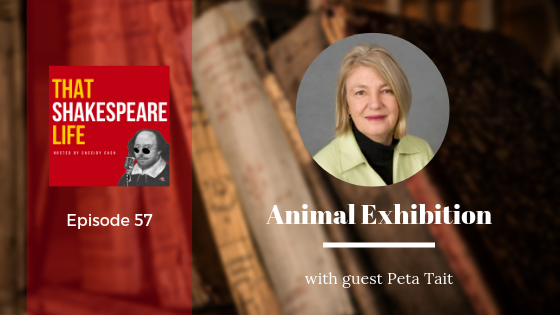 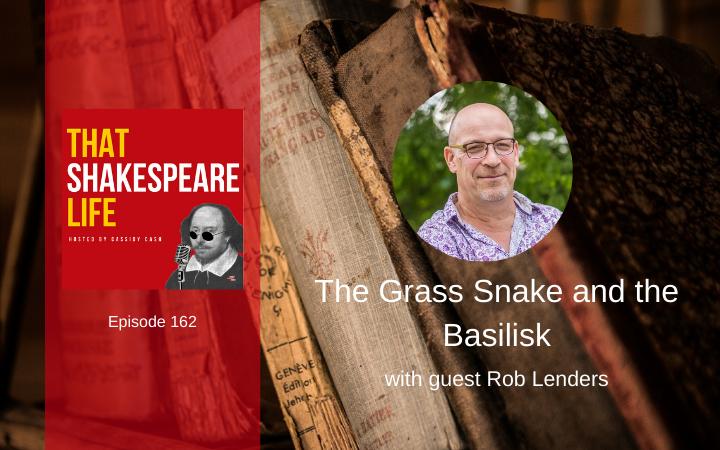 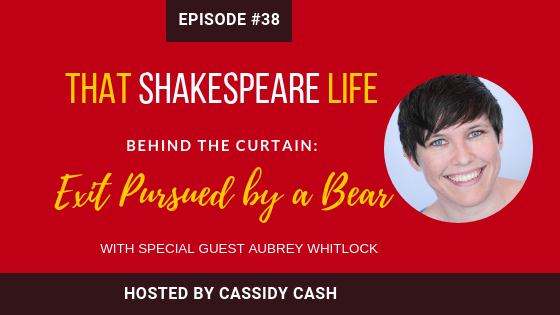 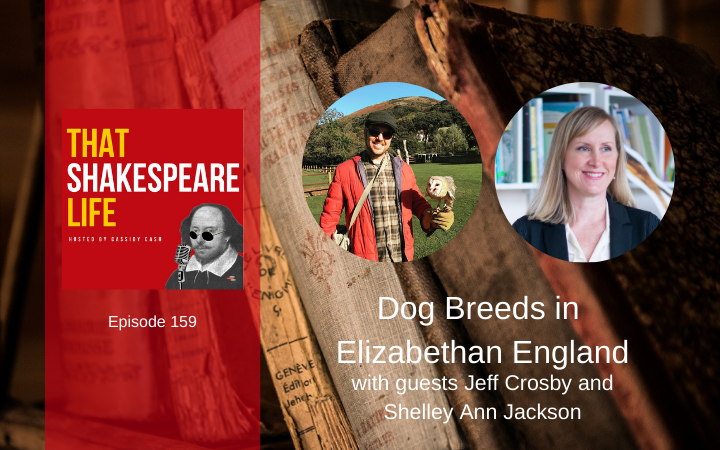