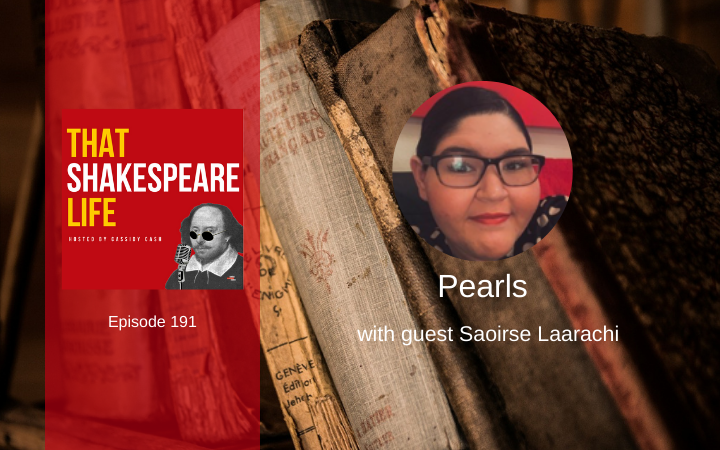 Welcome to Episode #191 of That Shakespeare Life, the podcast that takes you behind the curtain and into the life of William Shakespeare.

Shakespeare uses the word “pearl” over 40 times across his works. He describes them as objects of high value, and in Troilus and Cressida, uses the pearl to describe a rare and valuable woman saying “she is a pearl, Whose price hath launch'd above a thousand ships.” The pearl trade was an industry well established under Henry VIII of England, who looked to the pearl trade as a way to strengthen England’s international relations after separation from Catholicism left them in need of some strong allies. Elizabeth I continued this pursuit, but enhanced the value of the pearl in England up to six fold, by some scholarly estimates, over the

first 60 years in the 16th century due in part to the fact that the Queen literally wore thousands of them herself. Many of her most opulent outfits, appearing in numerous royal portraits of Elizabeth I, feature thousands of this precious gemstone. During Elizabeth’s reign, England regularly imported pearls by the shipload from countries like Morocco, Persia, and China. The imagery and symbolism of the pearl in England is associated with purity, chastity, and even, as the description for the ocular disease cataracts, which Shakespeare alludes to in A Midsummer Night’s Dream and Rape of Lucrece.

Our guest this week is Saoirse Laarachi, a PhD candidate with the Shakespeare Institute, and author of Pearls: Trade, Beauty and North Africa for Medieval and Early Modern Orients. She joins us today to share the history of pearls in Shakspeare’s lifetime to discuss their use in general fashion, their purpose in international trade agreements, and what we should understand about Pearls from the Orient, specifically, when we find these references in Shakespeare’s plays. 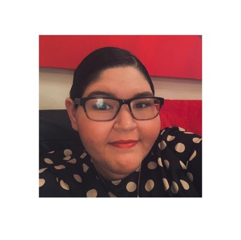 Saoirse Laarachi is a Doctoral researcher at the Shakespeare Institute. Her work surrounds rethinking the early modern body and how it was adorned and performed in the 16th and 17th centuries. She has written for the King's Centre for Early Modern Studies on prosthesis and is currently a research member of Medieval and Early Modern Orients (MEMOs).

Watch video versions of the podcast, exclusive interviews, documentaries, virtual tours, and more! Come inside, where you can cook, play, and dance your way through the life of William Shakespeare. 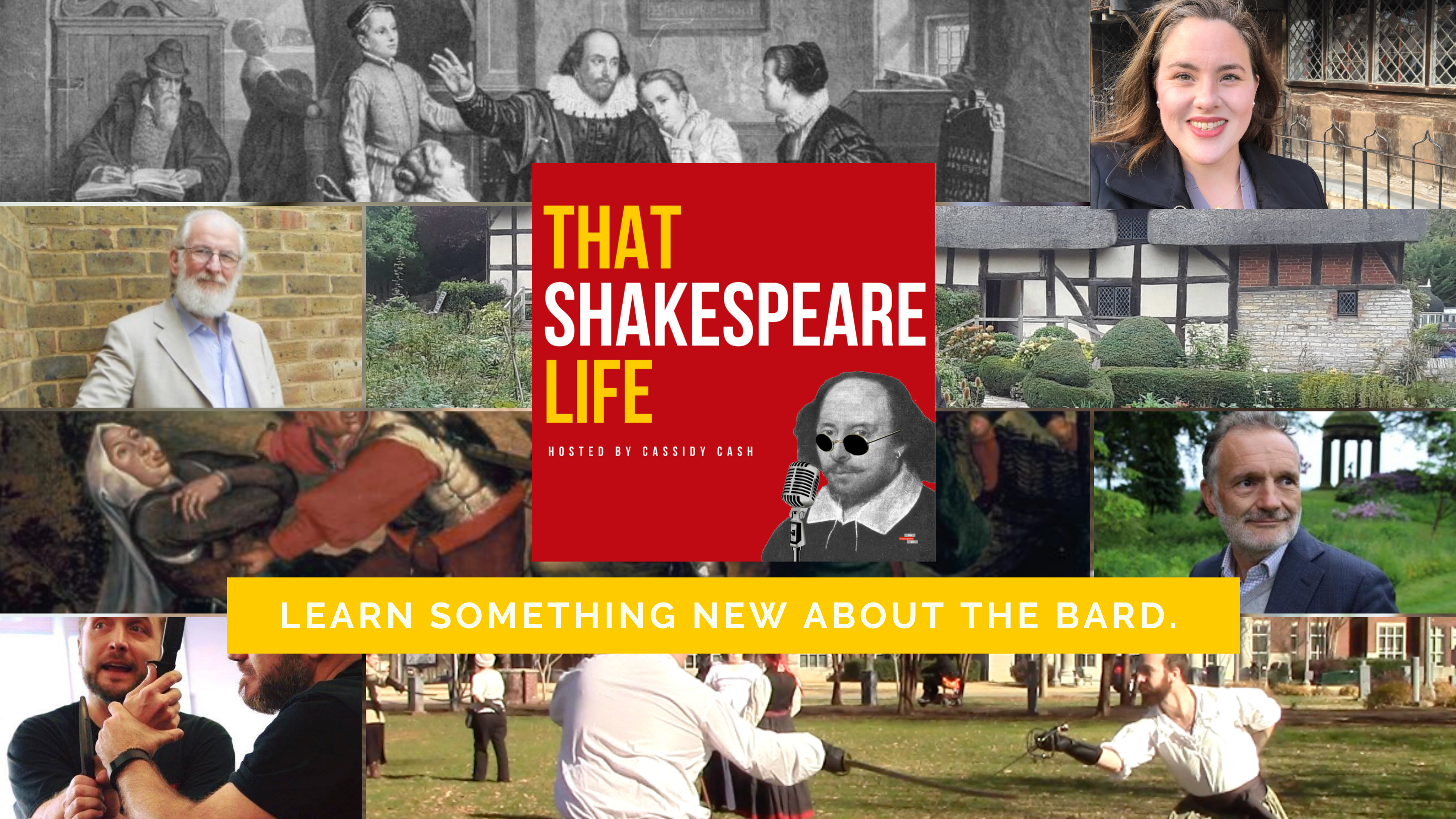 Members of That Shakespeare Life get the digital streaming app included in their subscription. Learn more here.

I'll set thee in a shower of gold, and hail
Rich pearls upon thee. 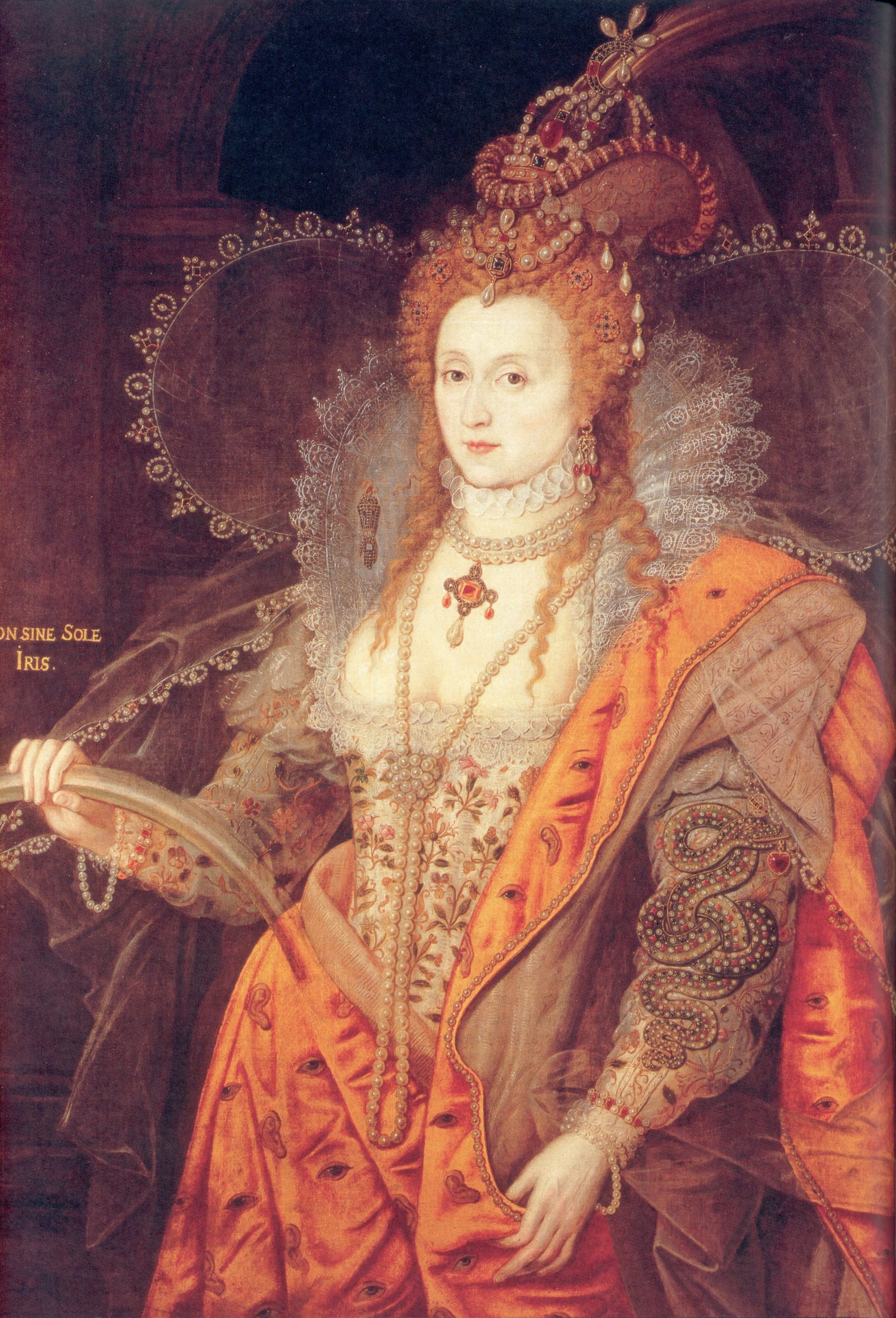 The Rainbow Portrait, c. 1600–02, attributed to Marcus Gheeraerts the Younger “She is also dripping with jewels and fine fabric, depicting her majesty, splendour and wealth. The beautiful crown on her head is a symbol of the monarchy. Her portraits have long since passed the time when they needed to show she was the rightful queen; Elizabeth is the monarch. She is also wearing pearls, a symbol of virginity.” Description by By Melanie Jones, published 20th June 2010 for the Historical Association's article “Analysing Portraits“. Image Source Public Domain. 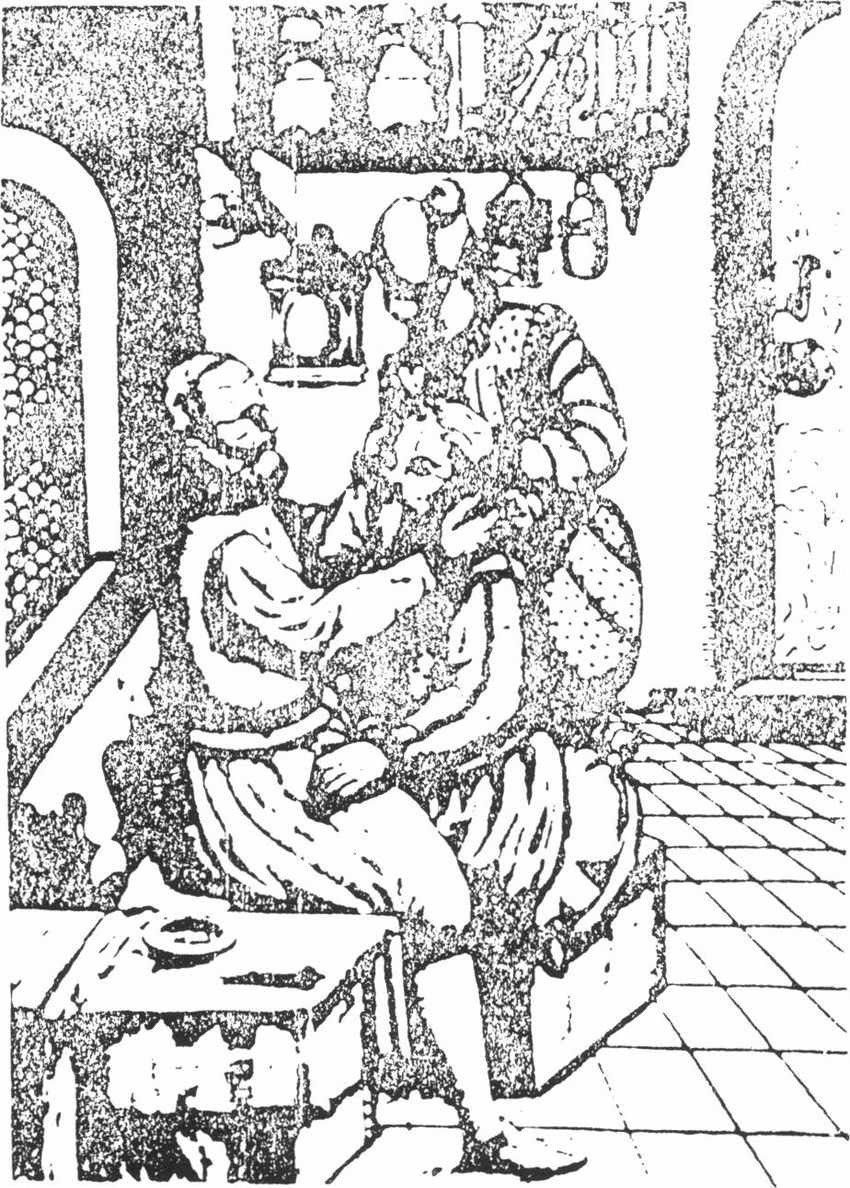 Couching of cataract in second half of the 16th century. Reproduced by permission from Gorin G.: History ofOphthalmology. New York, Publish or Perish (Raven), 1982, p. 36. | Source

Along with being a symbol of beauty, Saoirse identifies the pearl as being a symbol, surprisingly, for eye disease. Saoirse shares that Shakespeare uses this medically symbolic association with pearls in his play, Titus Andronicus and talks about a pearly gaze. Saiorse explains why the pearl is associated with eye disease for Shakespeare’s lifetime:

It is mentioned twice [in Titus Andronicus]. Pearl that pleased the empress eyes, pearl eyed slave. Aaron had blinded her, lapse in her faculties, obscuring is villany by a pearly gaze. Light vs dark, humuroal theory, conditions with eyes, especially cataracts render patient unable to distinguish anything but light and darkness. The nature of the pearl as  signifier as lightness and urity would yo the early modern eye make it an appropriate association, conditions such as glaucoma, cataracts and ways to define thse conditions . 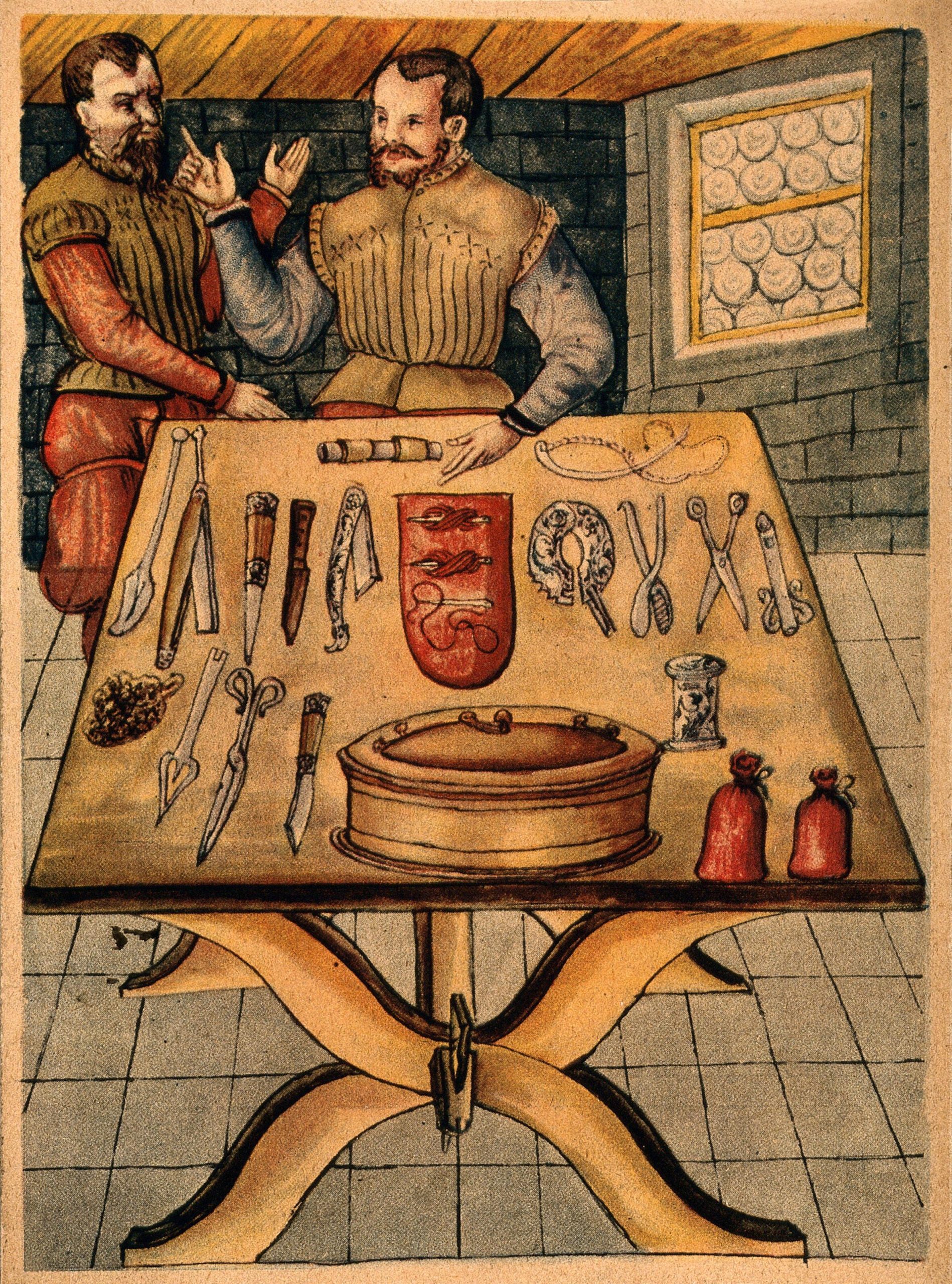 Surgical instruments laid out on a table, for use in cataract and hernia operations during the mid 1500s, with two men in 16th century dress standing behind it. Colour facsimile process print after a 16th century manuscript, 1925. Stromayr, Caspar. Date [1925] Reference 568022i. Source: https://wellcomecollection.org/works/q8k8uaye

QUEEN ANNE in her robe; in her hair
richly adorned with pearl, crowned… 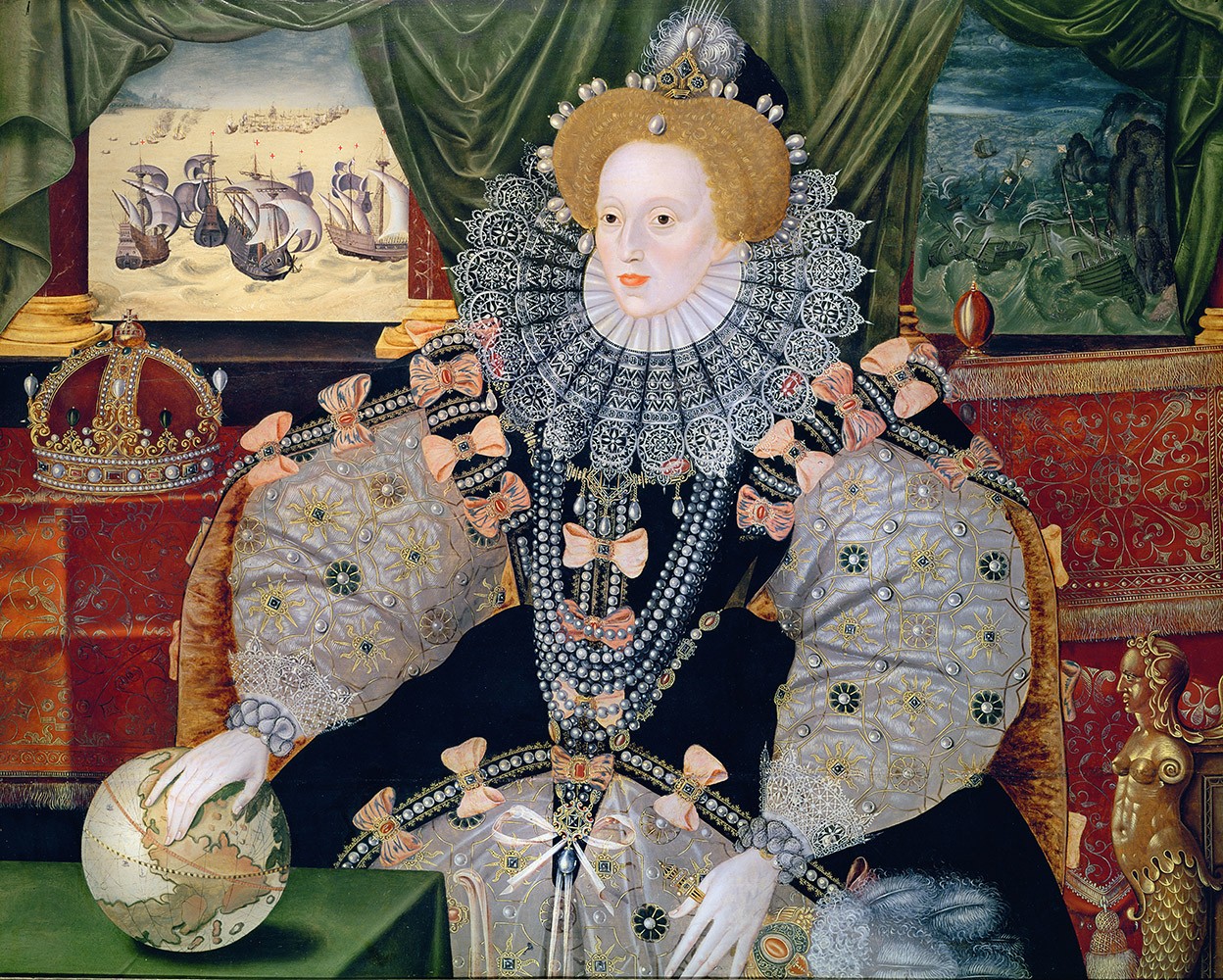 The Armada Portrait of Elizabeth I c. 1588, Anonymously painted, formerly attributed to George Gower (1540-1596). The portrait was made to commemorate the defeat of the Spanish Armada (depicted in the background). Description provided by wikipedia and cites Cooper, Tarnya (2014) The Real Tudors : kings and queens rediscovered, London: National Portrait Gallery ISBN: 9781855144927. The original portrait is housed at Woburn Abbey. “Her rich dress speaks of her wealth and the gown is embroidered with small suns and pearls which are symbols of peace or plenty and purity, respectively.” Description by By Melanie Jones, published 20th June 2010 for the Historical Association's article “Analysing Portraits“. Image SourcePublic Domain.

Valiant Othello, we must straight employ you
Against the general enemy Ottoman. 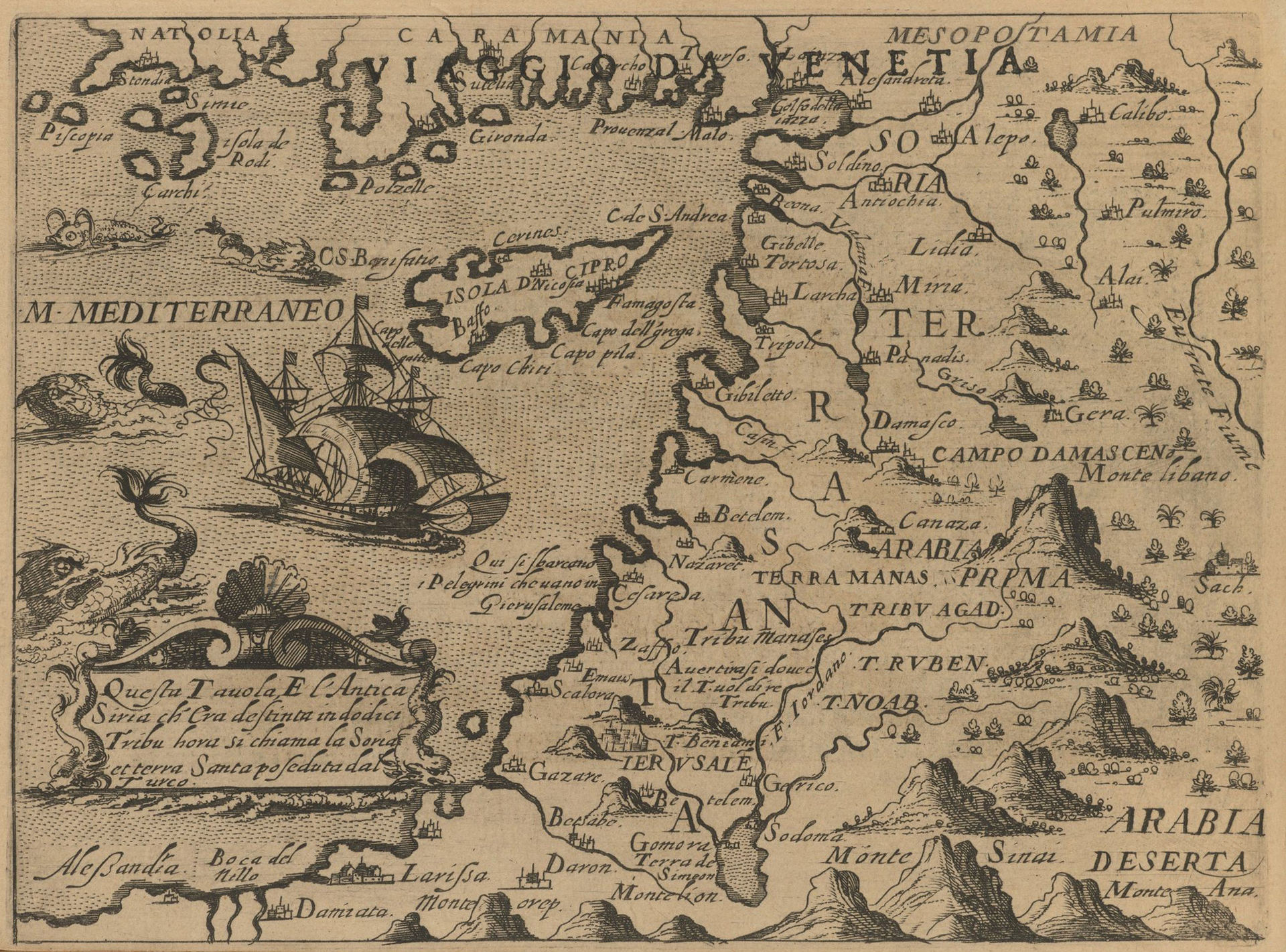 During Shakespeare's lifetime, the Ottoman Empire included far more regions of the world than just Africa. The map above shows a section of Israel that was including the Ottoman Empire when the map was made in the late 16th century. In true Shakespeare fashion, the actual location and nationality of Othello is left incredibly vague because words like “Ottoman” and “Orient” could refer to many regions, ethniticities, and races of the world. Shakespeare’s works describe pearls of higher value as specifically “Orient” pearls. As Saoirse, explains, there are many areas of the world Shakespeare could be referring to when he writes about the “Orient.”

Orient is the East today, asia and includes china, turkey, Middle East, india, and so on. Can be tricky because sometimes and throughout Shakespeare scholarship criticism, North Africa is often included in the Orient even though geographically it’s not the same; it does share religion and culture. Not sure why those [pearls] are more valuable but possibly because of trade and other ocuntires are sourcing from alternate places so oreint pearls were more rare.

Oranamentalism: The Art of Renaissance Accessories – Edited and Introduced by Bella Mirabella (there's a great chapter all on Pearls by Karen Raber

Of Pearls and Scimitars: The Shakespearean Bazaar of Oriental Props – Ladan Niayesh*

* This article is in French, but you can select “english” under the translation options available at the website. Look under “abstracts” for a tab to select English.

Have the latest updates sent right to your inbox every Monday, where you can start your week off with Shakespeare!
I'll send you this diagram of The Globe Theater to welcome you.