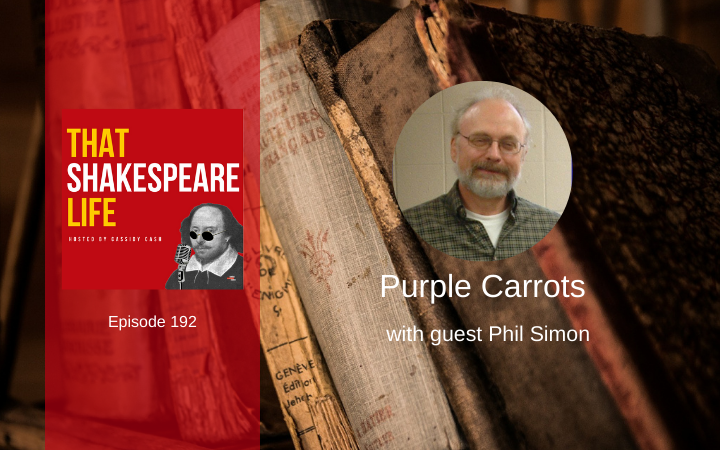 Welcome to Ep 192 of That Shakespeare Life, the podcast that goes behind the curtain and into the real life and history of William Shakespeare by interviewing the experts who know him best.

Wild carrots are indigenous to Europe and known as Queen Anne’s Lace, as well as Devil’s Plague, and Fool’s Parsley, this wild carrot variety was known primarily for its use as an herb and in medicinal recipes. The formal, cultivated carrot arrived in England by the 15th century, and right up until Shakespeare’s lifetime, carrots were mostly purple. According to the Wild Carrot Museum in the UK, orange colored carrots arrived in Europe right in the middle of Shakespeare’s lifetime, making the orange carrot a new thing for Shakespeare. In fact, one reason orange carrots are thought to have caught on so quickly in popularity is because cooking the orange carrots didn’t stain the pots nearly as bad as cooking with purple ones. The new carrot took a firm hold in the cultivation of this root vegetable and by the time British settlers arrived in North America, the carrots they brought with them were primarily orange and sometimes white. When it comes to finding carrots in Shakespeare’s plays, the word “carrot” isn’t in there. We can only partially fault Shakespeare for not giving us a nice reference to carrots for this week’s episode because the word “carrot” was just getting started in the English language. “Carrot” arrived in English around 1530, but in popular vernacular, there was a great deal of overlap between the names for root vegetables. Carrots, parsnips, and parsley were often referred to interchangeably by the same names. In fact, in Old English, there’s not a good way to distinguish between carrots and parsnips, since they were both called “moru” coming from the, fittingly, root word for “edible root.”

Our guest this week, Phil Simon, is an expert in historical horticulture and he joins us today to help us understand what Shakespeare would have called this orange root vegetable, whether or not it was a regular at the dinner table, and to explain the history of what kind of carrots Shakespeare would have enjoyed. 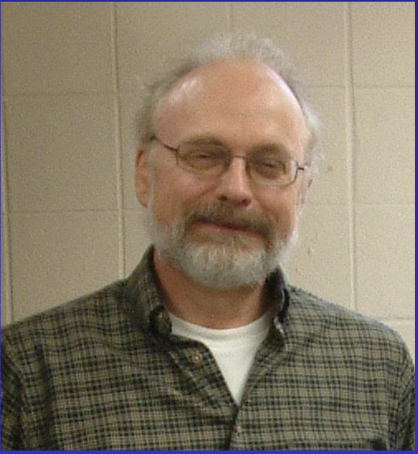 Dr. Phil Simon is a USDA, Agricultural Research Service – Research Geneticist and Professor of Horticulture at the University of Wisconsin, Madison. His research in vegetable genetics and breeding has focused on carrot improvement, targeting improved flavor and nutritional quality, nematode, disease and abiotic stress resilience. He led the development of widely used carrot germplasm with high carotene content, sweet, mild flavor, purple color, and root-knot nematode resistance. To complement his breeding effort, he has trained 35 graduate students, developed breeding tools, including the sequencing of the carrot genome, and he has collected carrot, Allium, and other vegetable germplasm in 10 collecting expeditions in a dozen countries. 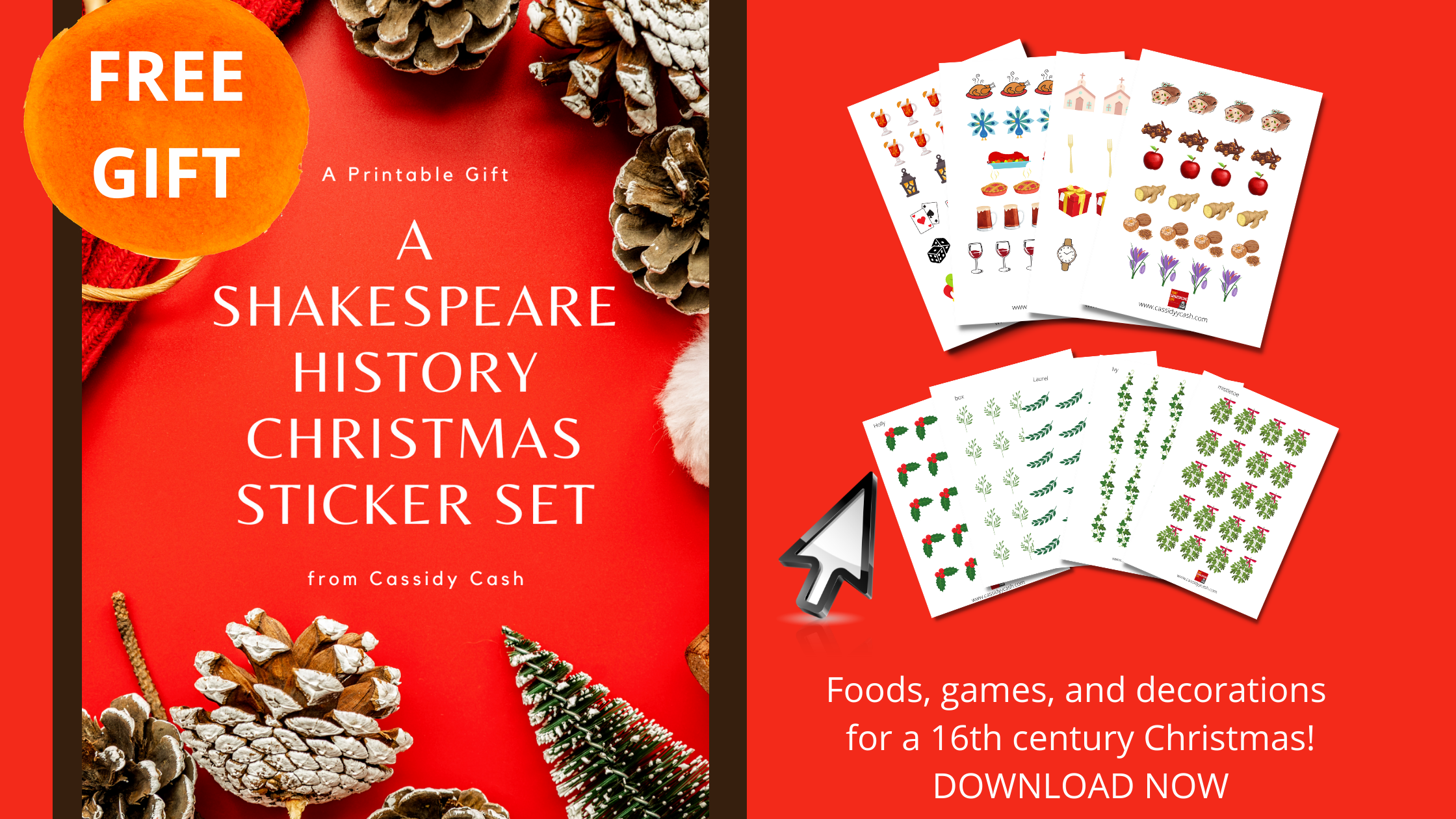 Sign up here to get weekly episode notifications from That Shakespeare Life and join our wonderful email community. Email subscribers get gifts like this sticker set, maps, diagrams, and other samples from our art shop once a month just for subscribing. Stay in touch and get a free gift. Sign up today and download the sticker set right away.

for the elegancy, facility, and golden cadence of poesy, caret.
Holofernes 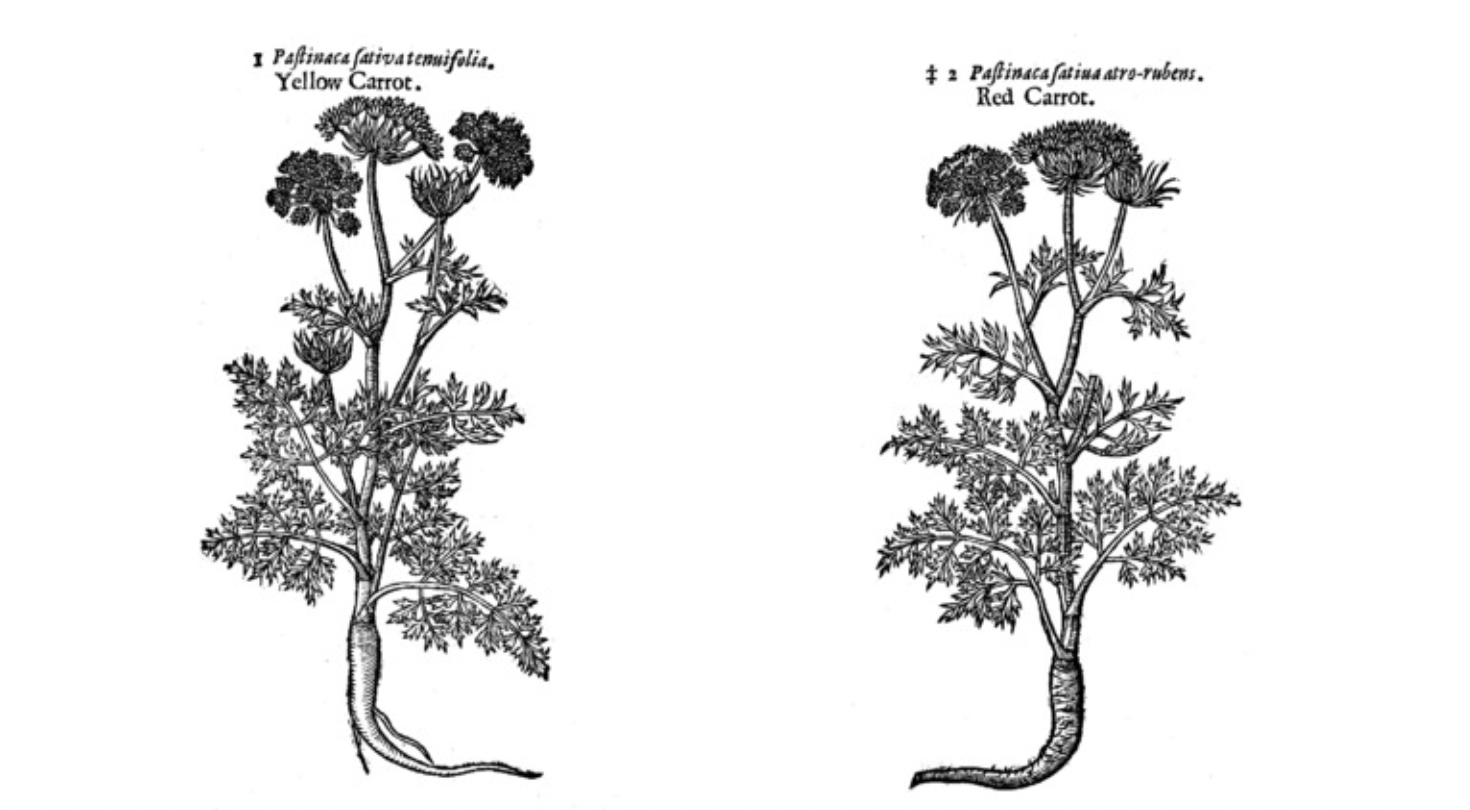 Gerard's Herbal, printed 1597. The most famous of Elizabethan herbals, this book accounts for both the red and the yellow carrot. Description by Gerard: “The leaves of the garden Carrots are of a deep green colour, composed of many fine Fennel-like leaves, very notably cut or jagged, among which riseth up a stalk straight and round, four cubits high, somewhat hairy and hollow, having at the top round spoked tufts, in which do grow little white flowers: in their places cometh the seed, rough and hairy, of a sweet smell when it is rubbed. The root is long, thick and single, of a fair yellow colour, pleasant to be eaten, and very sweet in taste.” Source: Online version of Gerard's Herbal. Public Domain

Purple carrots weren't the only kind of carrot available, but they were popular. As Phil explains, the words “parsnip”, “carrot,” and “Parsley” could all be used interchangably in the 16th century. Not so much because the plants themselves were indistinct from one another but instead due to the fact that it took a trained eye to make the distinction. The tops of carrots, for example, look very much like parsley and, indeed, are cooked in many of the same ways. Additionally, since at this time in their cultivation carrots were predominantly purple and white, a white carrot was often confused with a white parsnip. Therefore, when you read about the word “caret” in Shakespeare's plays, the actual food item Shakespeare could have had in mind could be any one of these three foods. 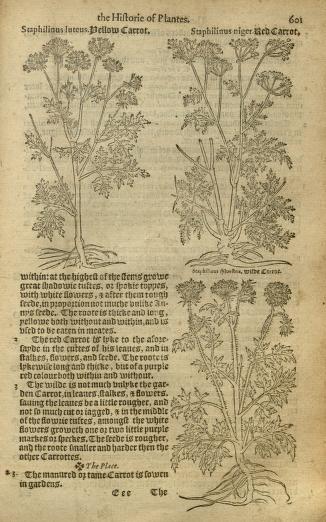 A nievve herball, or, Historie of plantes : wherein is contayned the vvhole discourse and perfect description of all sortes of herbes and plantes : their diuers and sundry kindes … and that not onely of those whiche are here growyng in this our countrie of Englande but of all others also of forrayne realmes commonly used in physicke. First set foorth in the Doutche or Almaigne tongue. Translated from Rembert Dodoens by Henry Lyte (1529 – 1607). Translation was published in 1578. Lythe's translation of the description of a carrot is provided (and edited for some modernisation) by the Carrot Museum UK.

Lythe describes the carrot as follows: Of Carrots (Chap xxxviii) (note this has been edited by the Curator for ease of reading)

The Kinds – There be three sortes of Carrots, yealow and red whereof  two be tame of the garden, the third is wild growing of it selfe.

1.The yealow Carrot hath dark greene leaves, all cut and hackt almost like the leaves of Chervil, but a great deal

browner, larger, stronger, and smaller cut. The root is thicke and long, yealow both without and within and is used to be eaten in meates.

2. The red Carrot is like to the aforesaid in the cuts of his leaves, and in stalks, flowers and seed. The root is likewise long and thicke, but of a purple red colour both within and without.

3. The wilde is not much unlike garden Carrot, in leaves stalks and flowers, saving the leaves be a little rougher, and not so much cut or jagged. In the middle of the flowry tufts amongst the white flowers groweth one or two little purple marks or specks. The seede is rougher and the root smaller and harder than the other Carrots.

The Place –  1 & 2  the manured or tamed Carrot is sowne in gardens; 3 the wild groweth in the borders of fields, by high waies & paths, and in rough untoiled places.

As our guest this week points out, the carrot was known best for being animal fodder (great for horses, for example). However, people would eat it too, and as the many herbals that mention carrots from the period point out, they were relied upon for various ailments. The man, henry Lythe, quoted above wrote specifically about the carrot being useful against venom and the bites or stings of “venemous beasts.”
Become a Patron! 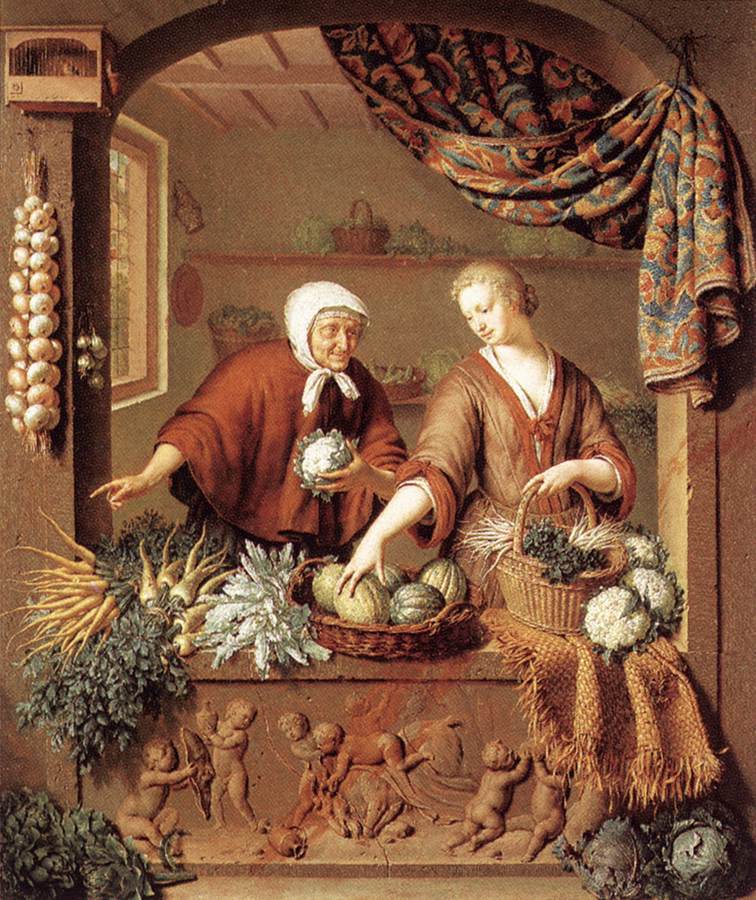 One anecdotal reason that people started wanting to cultivate other varieties of carrots was due to the fact that purple carrots would stain a cooking pot, whereas the orange and yellow varieties were less destructive to the kitchen. The similarities between carrots and other vegetables like parsley can be seen in the comparison of carrot to a poisonous plant called Cow's Parsley. As our guest explains,

Cow parsnip looks like carrots but it is very poisonous. Stinking and deadly carrots, referring to the wild relatives of carrots that are quite toxic. In Merry Wives of Windsor, Sir Hugh says “focative is caret”, and that, replies mistress quickly, is a good root. There’s a fallic reference here, but the term ‘caret” is the word for missing, and that may be the real context that the word is brought up us punning on the carrot.

As our guest points out this week, the carrot was not a new invention for England. In fact, the wild carrot is native to England. Phil explains,

Tey did have wild carrots in Shakespeare’s lifetime,. They originally came from Central Asia. The process where for humans, there’s historical evidene the earliest humans were in Africa and we spread all over the world, [there's] very good evidence that crops like beans, potatoes, and corn started in Central/South America and spread globally. For carrots, the first ones were wild carrots, probably many thousands of years ago, and they spread as a weed, they are an effecitve weed, the spread readily, get along with humans because their seeds have spines on them that stick to clothing. Wild carrots came to the US with European settlers, and there probably weren’t any before then. Wild carrots started in Central Asia, Afhanistan/Kazakstan, [and similar places] and spread as wild paints do, and 4-5k years ago they were definitely found in Switzerland, so we can posit carrots came to England by Shakespeare’s lifetime.

Use the left and right arrows to scroll this gallery of early modern carrot portraits, paintings, and sketches. 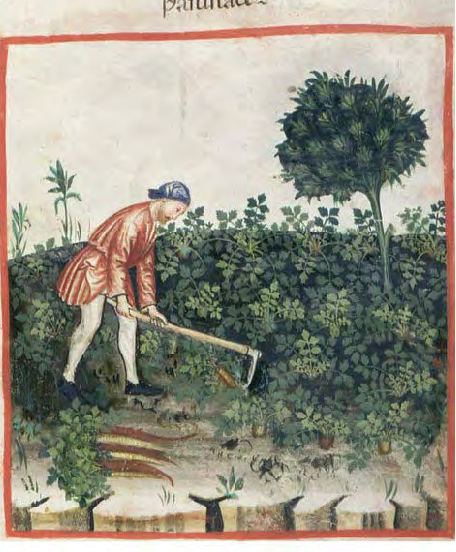 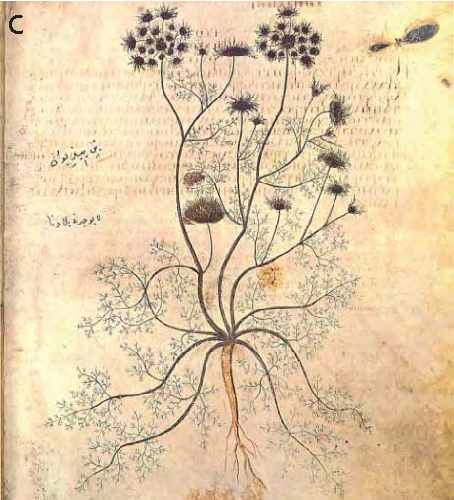 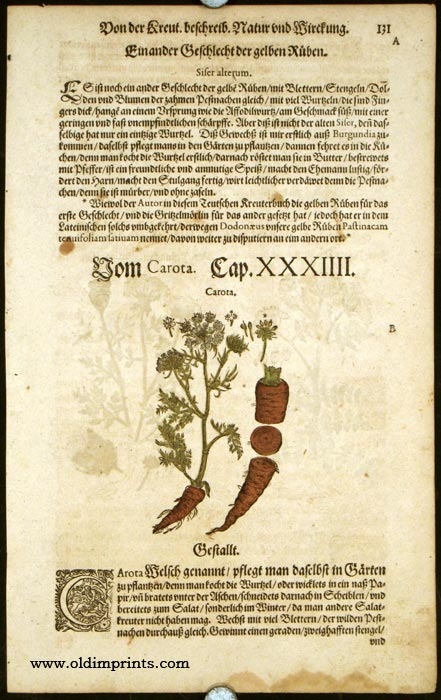 From“Chronica Horticulturae Vol. 51 number 2.” (2011). Author not provided. 1.”Peasant digging carrots from the Tacuinum Sanitatis, Roma 4182, 1380- 1400. The long, thin roots, either purple or light yellow, intermingled in the foreground row and in the harvested pile clearly represent carrot. The Latin text reports that pastinace stimulates sexual intercourse but slows down digestion, and that the purple type, ripe in winter, is the best” 2. Carrots from Vilmorin’s Vegetable Garden (1586). (A) Early Horn; (B) Dutch Horn. 3. Cultivated and wild carrots from the Juliana Anicia Codex of 512: (A) Staphylinos Keras, the cultivated carrot; (B) Staphylinos Agrios, the wild carrot, but appears to be a primitive type of cultivated carrot; (C) Gingidion, the wild carrot (Daucus gingidium)”  4. Picture of carrots from Gerard's Herball. Source

Understand that the wild carrot was not known to William Shakespeare as “Queen Anne's Lace” since the Queen Anne upon which that monicker is founded would not reign in England until the 18th century and well after Shakespeare.

Secondly, please remember that there are a lot of toxic and poisonous plants that look, smell, and present themselves like a wild carrot. Do not go out and try to find and definitely do not consume any wild plant without expert advice and instrution. We would not want you to get too excisted about exploring this part of Shakespeare's history and accidentally ingest something jorrible, like hemlock, which is looks very much like Queen Anne's Lace.

Where available, affiliate links are used for recommended resources.

Summaries and References for the two key seminal papers by O. Banga on carrot origins in Europe, based information available in 1957.

An updated review of the historical record for carrot domestication by P.W. Simon in 2000.

History and iconography of carrot by J. Stolarczyk and J. Janick in 2011.

The World Carrot Museum created and operated by J. Stolarczyk

Useful links  on purple carrots (and carrots in general):

Sign up here to get weekly episode notifications from That Shakespeare Life and join our wonderful email community. Email subscribers get gifts like this sticker set, maps, diagrams, and other samples from our art shop once a month just for subscribing. Stay in touch and get a free gift. Sign up today and download the sticker set right away.