Ep 74: Valerie Wayne on the History Behind Cymbeline 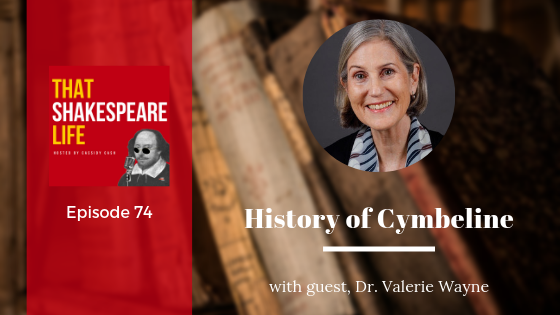 Welcome to Episode #74 of That Shakespeare Life, the podcast that takes you behind the curtain and into the life of William Shakespeare.

In the infancy of the British Empire as Scotland, England, and Ireland were unified under the name of Britain under James I, William Shakespeare writes the play Cymbeline. While the actual date he wrote it is unknown, the first performance of Cymbeline is thought to be in 1610, just three years before Shakespeare’s daughter, Susanna, is falsely accused of adultery in a public trial, which she won, and proved her innocence. The play Cymbeline applies what’s known as the calumny narrative, which is when a woman is accused of something unchaste and then is proven innocent, revealing that the charges were slanderous. Just like his daughter Susanna, the character of Innogen in Shakespeare’s Cymbeline is innocent, despite the ordeal of being falsely accused. While the play is not a representation of Shakespeare’s own experience since it was written before his daughter’s trial, the themes in Shakespeare’s Cymbeline bring to light a controversial side of England’s history by challenging what we often consider to have been status quo for 16th century England. But just how much of the play’s narrative is reflective of real life, and can we really tell what life was like in the early 17th century England just from the performances of these characters on stage?

Our guest this week, Valerie Wayne, points out in her introduction to the Arden Shakespeare’s Cymbeline, that Shakespeare’s personal experience reflects what happens in the play, and that parallels to historical accounts of England’s past monarch’s, along with political commentary about James’ unification ideas, resonate throughout the performance to paint a puzzle for us in posterity that, when examined more closely, can function as a glimpse into Shakespeare’s life, his opinions about women, and the turmoil at home politically, at the turn of the 17th century.

Subscribe to get the latest updates sent right to your inbox &
I’ll send you this diagram of The Globe Theater to welcome you. 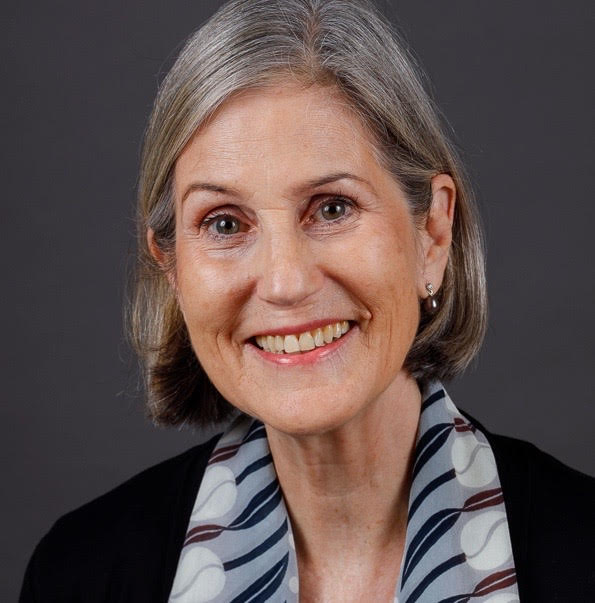 Dr. Valerie Wayne specializes in early modern English literature, including Shakespeare and his contemporaries, with an emphasis on gender, scholarly editing, and book history. She retired from the University of Hawai‘i in 2010 but is still active in Shakespeare research. Her edition of Cymbeline for the Arden Shakespeare, third series, is available on Amazon and can be previewed at a link we will provide in the show notes for today’s episode.Valerie has has published on folded time in Cymbeline and on the contribution that digital resources made to her edition of the play. She has been a Trustee of the Shakespeare Association of America, served on the editorial board of Shakespeare Quarterly , was a member of the Modern Language Association’s committee on the New Variorum Shakespeare for which she was Chair in 2012. Along with her numerous teaching and writing credentials, Valerie’s latest work editing a collection of essays called Women’s Labour and the History of the Book in Early Modern England will be published by Bloomsbury Arden Shakespeare next year.

In this episode, I’ll be asking Valerie about :

If thou dost marry, I’ll give thee this plague for thy dowry:
be thou as chaste as ice, as pure as snow, thou shalt not escape
calumny. 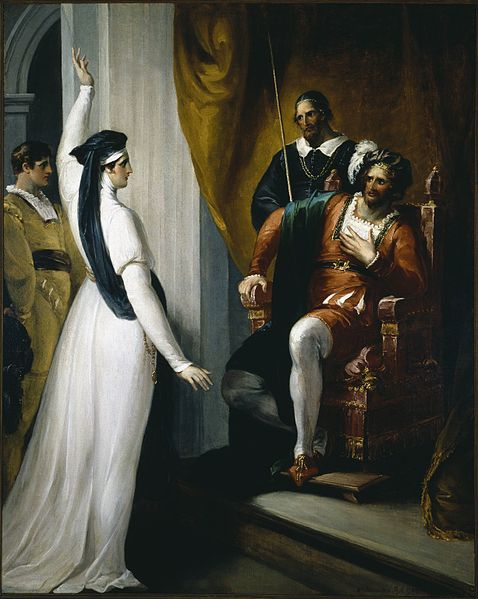 Simply put, the definition of calumny is to slander a person’s honor, to taint their otherwise good reputation with a lie or mistruth.

It shows up in Hamlet, Othello, and several others, but is used specifically to describe the kind of slander that happens when a woman is accussed of being unchaste, or of tainting her honor, through an act that is false, but evidence is produced against her. Usually, it is someone who is trying to benefit from ruining that woman’s reputation, or who seeks a kind of revenge by slandering her.

You can slander anyone, and thus commit or declare a calumny, but “the calumny plot” when talking about Shakespeare plays usually describes the situation when a woman is accused of cheating on her husband by someone who claims to have proof against her. This is used to hurt the man, or the woman, or both. An example would be in Othello when Iago tries to convince Othello that Desdemona has been unfaithful by stealing and planting her handkerchief on Cassio to “prove” Desdemona was an adulteress. Othello buys that line in the play, despite Othello’s love for his wife. That’s a calumny plot–a storyline that revolves around a lie told about a woman which is untrue, but brings about harsh consequences anyway.

This situation is theatrical, and used frequently not just in Shakespeare plays but persistently into modern movies and plays as well. However, for William Shakespeare’s lifetime these kinds of legal accusations against women were frequent, and existed in a society that, on the whole, held a man’s opinion as stronger than that of a woman’s. 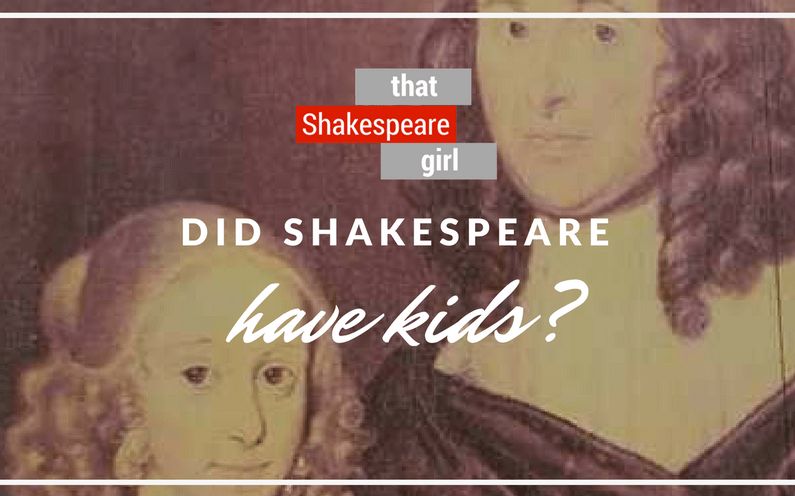 We take a look at Shakespeare’s family by asking the question “Did Shakespeare Have Kids?” Meet all three of William Shakespeare’s children and find out a little about each.

Who will believe thee, Isabel?
My unsoil’d name, the austereness of my life,
My vouch against you, and my place i’ the state,
Will so your accusation overweigh,
That you shall stifle in your own report
And smell of calumny. 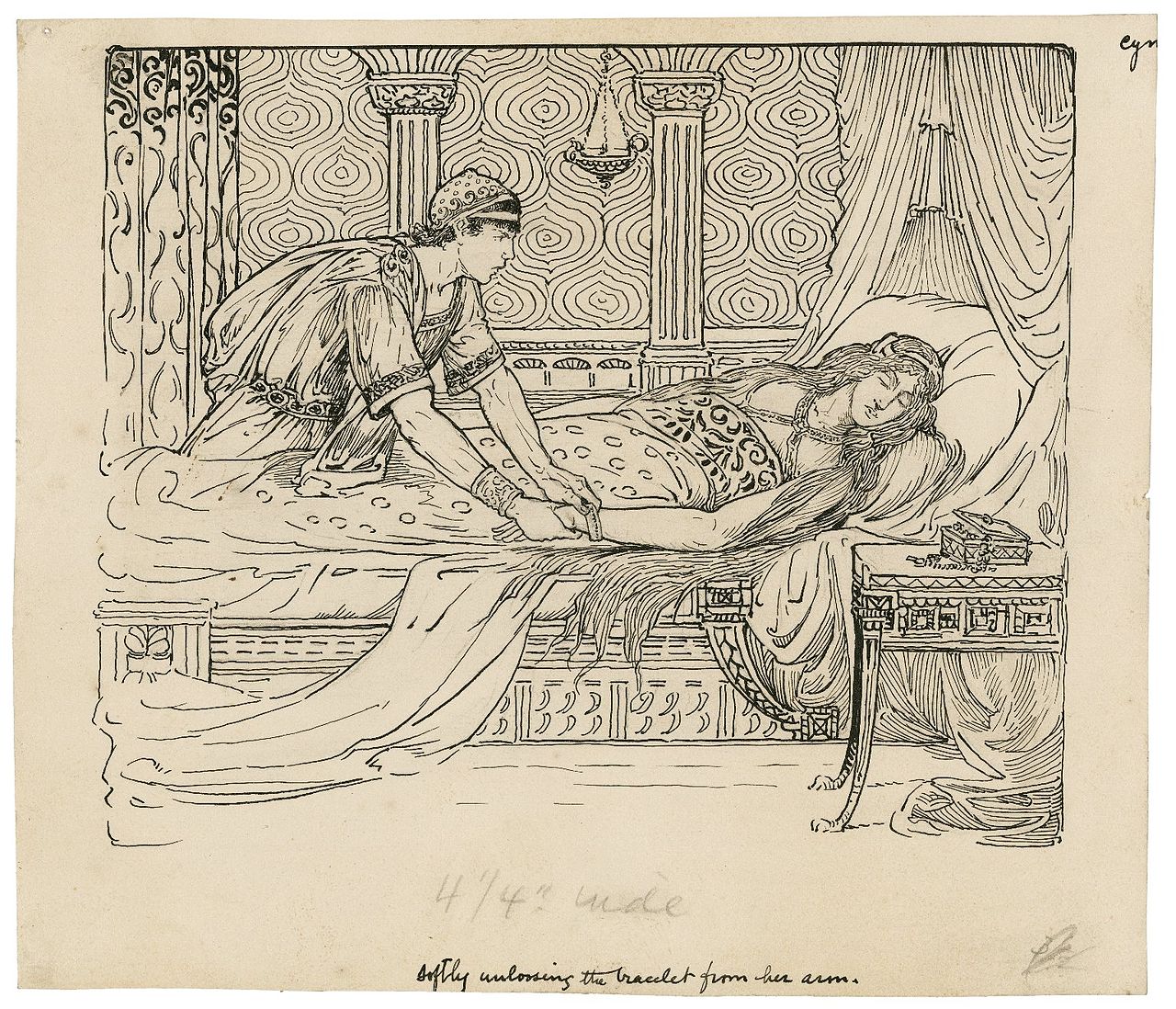 In the play, Cymbeline, Iachimo seeks to slander Innogen and does so by accusing her of having had an adulterous affair with him. He sneaks into her bedroom at night at steals her bracelet. In so doing, he observes a mole underneath her breast as she sleeps. Iachimo then uses this knowledge to make it seem as if he has been intimate with her. He makes it sound like that’s the only way he could know about her mole.

Posthumous, Innogen’s lover, is enraged at the news of her affair and calls her to meet him. She disguises herself as a boy and goes to the location they are supposed to meet. The chaos and misidentity, plus manipulation, failed information, and wrongful accusations make for an elaborate tale and an example of a calumny plot.

No might nor greatness in mortality
Can censure ‘scape; back-wounding calumny
The whitest virtue strikes. What king so strong
Can tie the gall up in the slanderous tongue? 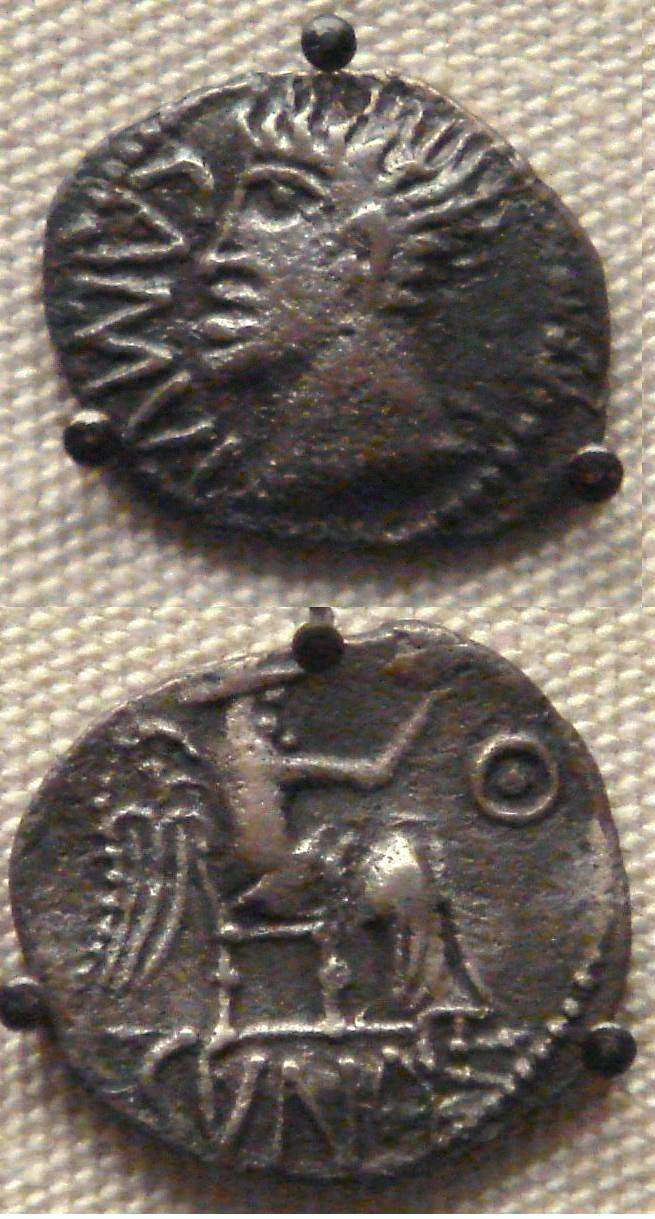 Coin of Cunobeline, photographed at The British Museum. Source

Cunobeline was Cym’s Latin name; he was referred to that way by the Romans, and most likely as Kymbeline by the Britons. We know about mainly from numismatic evidence. The coins shown in the image above were minted around 9AD and show Cunobeline as the sole ruler of the country.

Some coins declare him to be the son of the previous King, and that previous King is listed among a set of co-rulers, so it seems King Cunobeline was unique in ruling on his own at this time (immediately preceding rulers had co-rulers. Cunobeline was the first of a long line to rule independently).

He was victorious over the Romans at the Battle of Teutoburg Forest in 9AD, and sought to act against a set of Roman allies who were independent through a treaty they had made with Julius Caesar. He had three sons and spent his reign expanding his empire, and while his date is not certain (though dated between 40-43), his tomb is thought to be located on the outskirts of Colchester, in Essex, at The Lexden Tumulus.

Stories of his life and reign in England were passed down through generations, preserved by numerous historians including the ones we know Shakespeare to be fond of following, Ralph Holinshed and Geofffrey of Monmouth.

Hail, king! for so thou art: behold, where stands
The usurper’s cursed head: the time is free:
I see thee compass’d with thy kingdom’s pearl,
That speak my salutation in their minds;
Whose voices I desire aloud with mine:
Hail, King of Scotland! 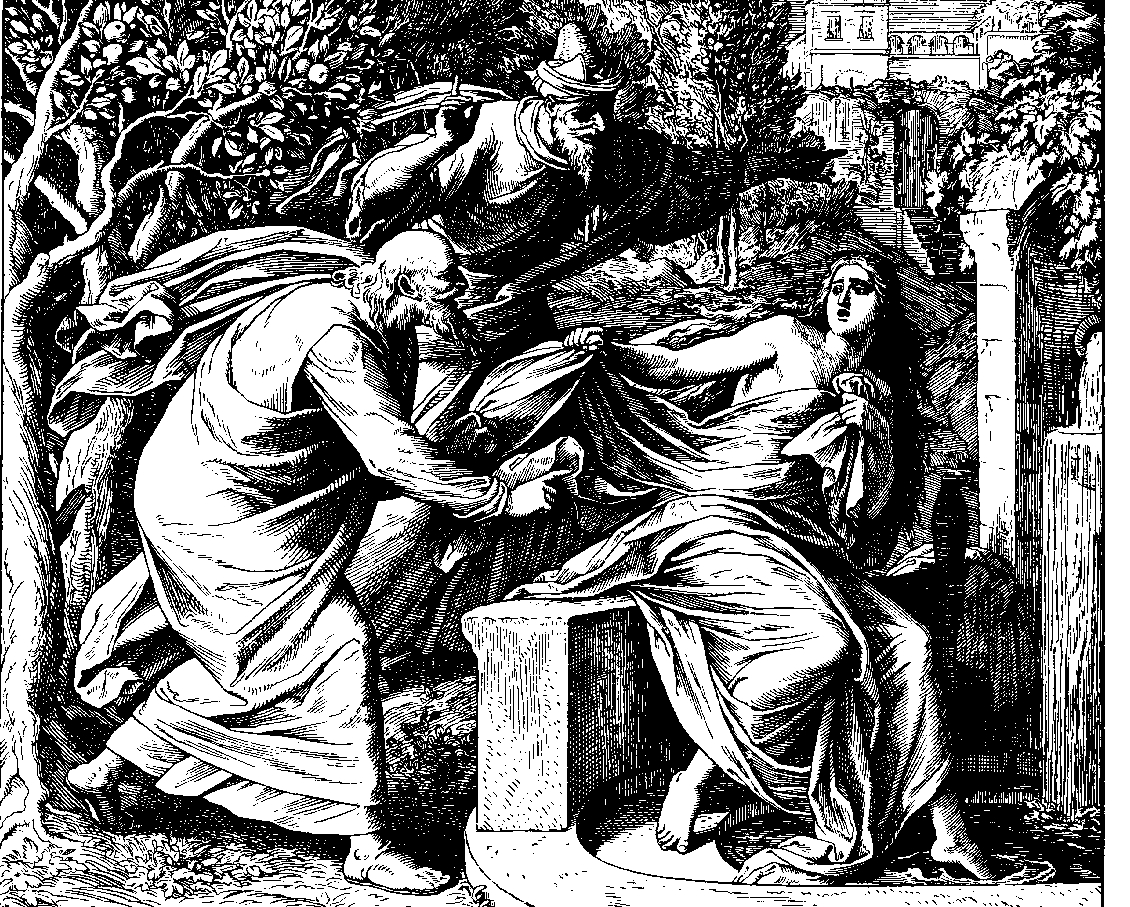 Susanna and the Elders

In Chapter 13 of the Book of Daniel in the Geneva and Bishop’s Bibles, which Shakespeare would have used for his plays, (part of the Aprocrypha), there is a famous story about a woman named Susanna.

She was bathing in her outdoor bath, and sent her attendants away. While bathing, she was observed by lecherous men who were also town elders. They lusted after Susanna and cornered her as she returns to her home from the bath. They threaten her, and threaten to blackmail her by saying she was meeting with a man at the bath instead of being, as she actually was, completely alone. The price for not slandering her comes as a demand that she have intimate relations with them.

Susanna refuses and is subsequently imprisoned, accused by the Elders, and put on trial. At her trial, Daniel intercedes for her and demands that the elders be looked at more closely. The elders are separated and questioned about the events, and during their questioning each elder claims that Susanna was meeting her lover under a different kind of tree. The two kinds of trees they mention, poetically pun with the words of the vision Daniel sees in this story (that lead him to intercede for Susanna), but in the court the men are revealed as liars because the two kinds of trees are massively different in size and shape, making it impossible that they are telling the truth.

The liars are put to death and virtue wins the day, and Susanna is freed.

Shakespeare refers to this story in his play, Merchant of Venice, when Portia is praised by Shylock and also Gratiano for being “a second Daniel” because she exhibits good judgement.