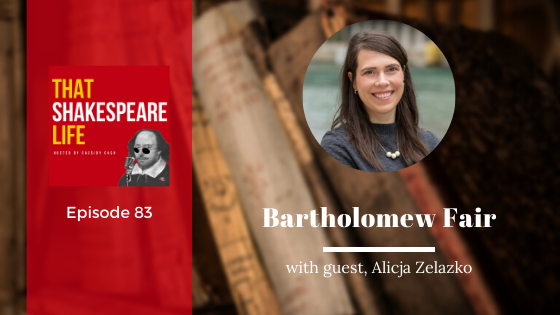 Welcome to Episode #83 of That Shakespeare Life, the podcast that takes you behind the curtain and into the life of William Shakespeare.

One of the biggest and grandest events occurring in London every year was the elaborate Bartholmew Fair. Celebrated in conjunction with St. Bartholomew’s Day, this fair took over the city in Shakespeare’s lifetime for three whole days of merriment that included the selling of wares, drinks and food vendors, as well as performances from stilt walkers, jugglers, puppeteers, and more. Here this week to share with us the history of Bartholomew Fair in Shakespeare’s lifetime, as well as how this festive carnival was born from pious means, is our guest, Alicja Zelazko. 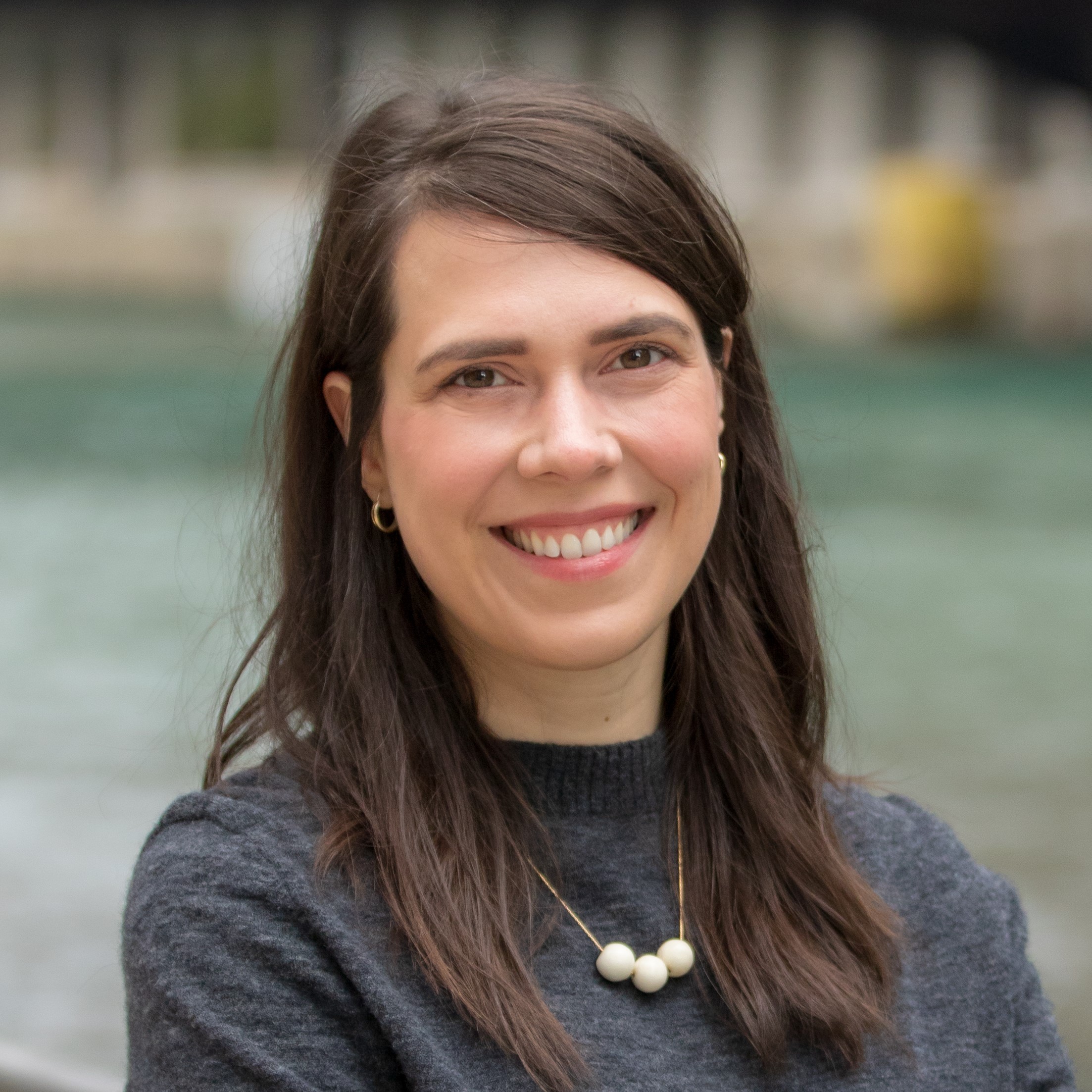 Alicja Zelazko is an Arts and Humanities editor at Encyclopædia Britannica, where she covers topics in the visual arts, architecture, music, and performance. A few of her articles include “Why Is the Mona Lisa So Famous?,” “What’s Inside the Great Pyramid?,” and encyclopedic entries on Frida Kahlo, Girl with a Pearl Earring, and The Starry Night. She holds an M.A. in Art History and previously worked at the Art Institute of Chicago and taught courses in art appreciation.

In this episode, I’ll be asking Alicja about :

…maids, well summered and warm kept, are like flies at Bartholomew-tide, blind, though they have their eyes; and then they will endure handling, which before would not abide looking on.
Duke of Burgundy 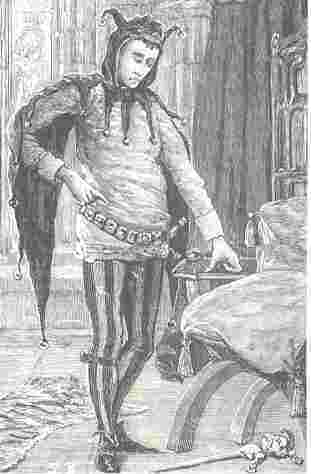 Rahere, the court jester to Henry I who applied to the King for a charter for a fair to support St. Bartholomew Priory. Source

The original Fair was founded by a court jester

While on a pilgrimage, the court jester to Henry 1, named Rahere, fell so ill he feared for his life. In desperation, he recommitted his life to God and vowed to dedicate his life to St. Bartholomew's care and protection, presumably in exchange for being allowed to live.

Rahere did, indeed, live and kept his promise by applying to King Henry I for a charter to run a fair whose proceeds would support the church. The King granted the charter in 1133 and the priory received substantial income from the tolls it was able to charge through sales of cloth. The event ran annually for three days surrounding the celebration of Bartholomew Tide. The event was so successful, it would go on to become the largest cloth fair in England. While Lord of the Prior, Rahere would put his court jester skills to use for entertainment for the visitors, with records showing he performed juggling tricks for their amusement. Source

Sirrah, go you to Bartholomew my page, And see him dress'd in all suits like a lady; That done, conduct him to the drunkard's chamber, And call him ‘madam,' do him obeisance.
Lord

Taming of the Shrew, Prologue 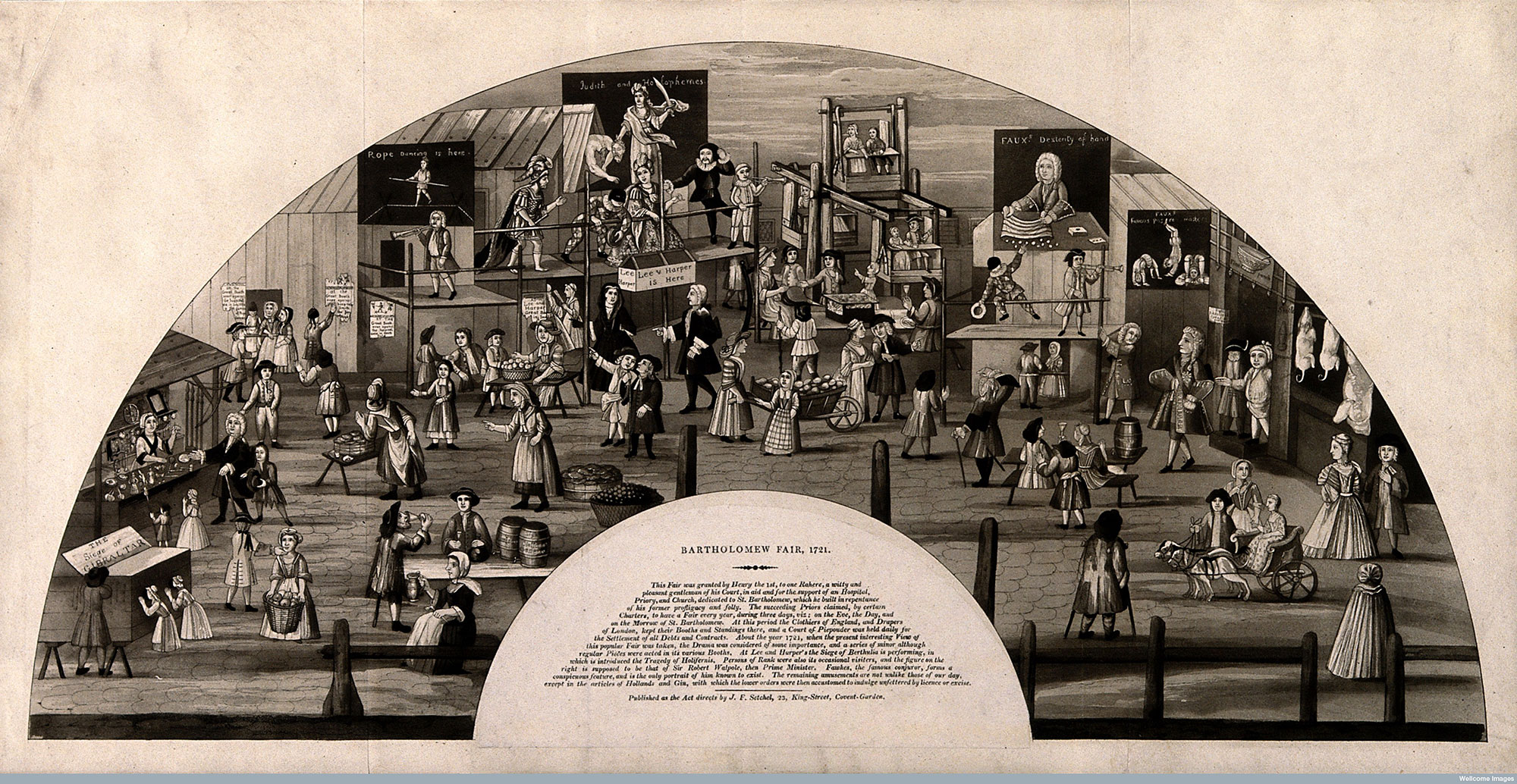 The origins of Bartholomew Fair can be traced back to the reign of Henry I when in 1133 a charter was first granted to the Prior of Smithfield. Based in the area of Smithfield cattle market near St Bartholomew hospital, the fair grew rapidly in popularity first as a cloth fair and then as London’s premier entertainment event. The fair was formally opened each year by the Lord Mayor of London on the eve of the feast day of St Bartholomew and ran for three full days in August by proclamation of the City, ‘to which all persons may freely resort and buy and sell according to the liberties and privileges of the said fair’.

By the early 18th century the fair had been extended to two full weeks and was fully developed as a commercial enterprise. In this early depiction the artist attempts to convey the sheer breadth of entertainments that were on offer there: fairground rides, fortune-tellers, acrobats and tight-rope walking, for example, among many other shows and stalls. SOURCE

Bartholomew Fair was held at Smithfield

Bartholomew's Fair was held at Smithfield. The fair featured booths, and theatrical booths were a prominent feature at the Fair. While we do not have records indicating Shakespeare had a booth there, several of his contemporaries are associated with Bartholomew Fair including Ben Jonson (the actor). A researcher named Dr. Rimbault claims that Jonson was there reprising the role of the grave digger from Hamlet after Jonson joined the Cibber's company:

Here were motions or puppet-shows of Jerusalem, Nineveh, and Norwich; and the Gunpowder Plot played nine times in an afternoon; wild beasts, dwarfs, and other monstrosities; operas and tight-rope-dancing and sarabands [dances]; dogs dancing the morris; the hare beating the tabor; and rolls of every degree.

Source: While he was referencing a version of the fair which happened in 1668, and therefore well after Shakespeare's time, and example of what kind of festivities might have been found at the ones from Shakespeare's lifetime can be found in Samuel Pepys account of the Fair:

…to see the mare that tells money, and many things to admiration, and then the dancing of the ropes, and also the Irish stage play, which is very ridiculous.

The Fair was a functional money making affair, featuring the sale of goods like cloth, meat, and other wares, but apparently used entertainment, puppet shows, juggling, acrobatics, and dramatic presentations to draw in the people from all over the country. 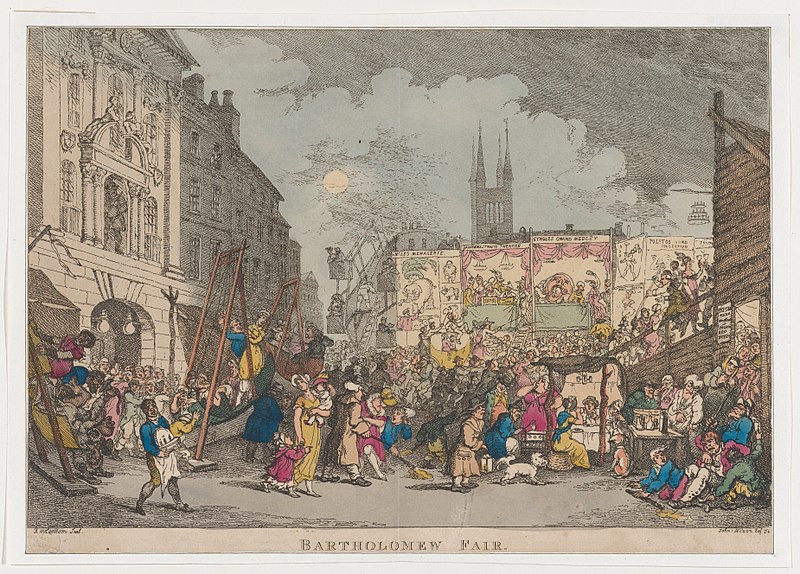 Originally, the market was setup to be for sales of cloth and meat, the tolls for which goods went towards paying the bills at St. Bartholomew Priory. The event was so popular with passersby and local Londoners, however, that it quickly blossommed into the largest cloth fair in England.

Merchants and buyers both nationally and internationally would travel intentionally to attend the three day festival surrounding Bartholomew Tide. Much like the atmosphere you might expect at a county fair here in the United States, the event was full of bright, flashy, colorful festivities and continued running right into the 19th century.

The real hey day for the fair, though, was the 16-17th century when it experienced great acclaim. While attracting many for the fun and festive events, it was also a mix of the unsavory and what one writer called “viscous” Right along side the family friendly events were the selling of illicit materials, too.

Hither resort people of all sorts, high and low, rich and poor, from cities, towns, and countries; of all sects, papists, atheists, Anabaptists and Brownists: and of all conditions, good and bad, virtuous and vicious, knaves and fools, cuckolds and cuckoldmakers, bawds and whores, pimps and panders, roughs and rascals.

To sing a song that old was sung,
From ashes ancient Gower is come;
Assuming man's infirmities,
To glad your ear, and please your eyes.
It hath been sung at festivals,
On ember-eves and holy-ales 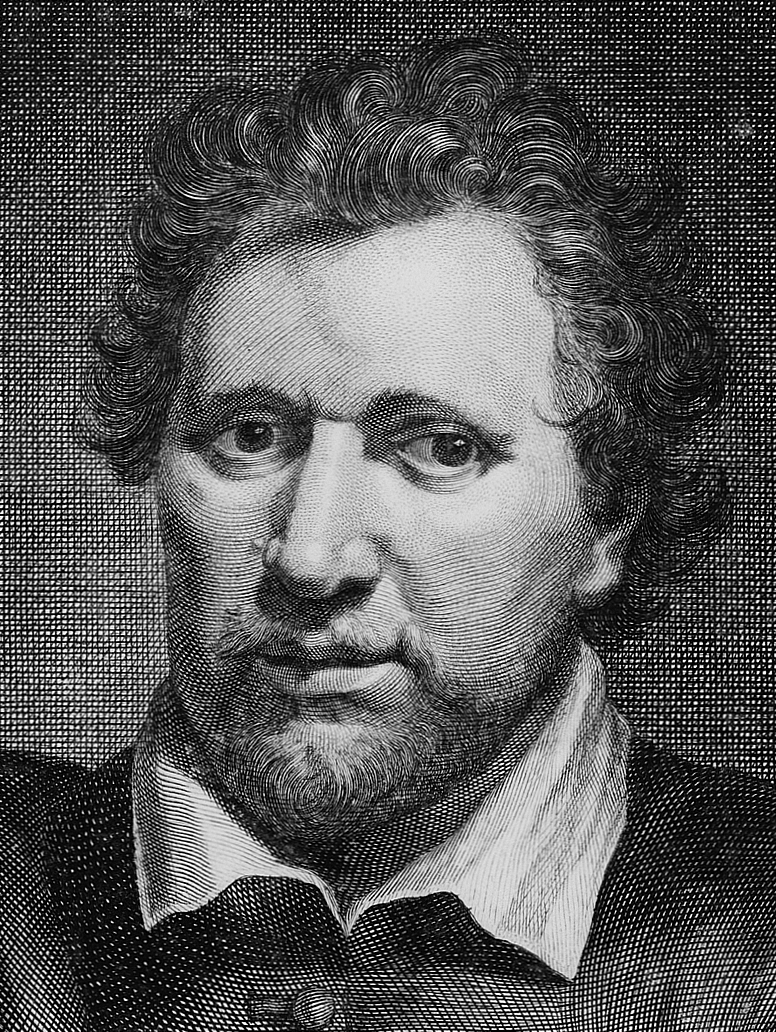 In 1614 the Smithfield area was given a facelift which included paving for the site of the fair at a cost of £1,600 to the city authorities, and on 31 October of the same year, Ben Jonson's theatrical depiction of the fair, and satire on the puritans who would close it down, had its first performance by the Lady Elizabeth's Men in their new theatre, The Hope.  The play, entitled simply Bartholomew Fair, appears to have been immediately popular with London playgoers, and remained popular through the Restoration. Source

Apparently, not only was Jonson's play popular, but it was a fairly accurate representation of the wild and raucous nature of the event. It may seem out of place today, looking back, to think that Rahere would have been a juggler at an event intended to support a church, but the main goal of this fair was to make money–and make it they did. The event included all manner of crazy antics, anything that would turn a coin.