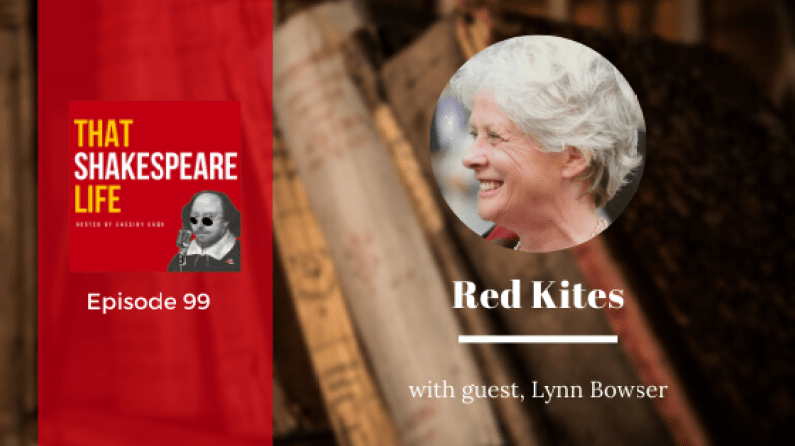 Welcome to Episode #99 of That Shakespeare Life, the podcast that takes you behind the curtain and into the life of William Shakespeare.

Shakespeare mentions kites seven times in his plays, often using the term to reference specific attributes of the bird to describe someone in the story. He'll refer to someone as “a kite” as if that's bad, or other times, he'll use the bird (or 16th century reputation of the bird) to suggest attributes like suspicion:

Although the kite soar with unbloodiebeak? (Henry VI Part II)

In the late 15th century, the King of Scotland decreed kites should be killed whenever possible, and that perspective on kites contrasted starkly with the later role of this unique bird in England, when kites were protected as an asset to London because they ate the vermin. This protection was short lived, however, and by the Tudor period Kites were again regarded as a nuisance to rural farm communities in England and Scotland. There are even surviving records showing that bounties were paid for the carcasses of red kites, as many people sought their extermination as pests. We can see this negative perspective on kites show up in Shakespeare’s plays, as every reference to kites in the works of William Shakespeare are derogatory. As we explore the role–on stage and in life–of the persistent red kite, our guest this week is Lynn Bowser, co-owner at Argaty Red Kites, which is Central Scotland’s only red kite feeding station.

No time to listen? Read the full transcript right here.

Lynn Bowser holds a degree in English literature and studied at Oxford for a few years before moving to Scotland with her husband Niall to take over the family farm, Argaty, near Stirling. In 1996 the RSPB (the UK's bird protection charity) started the second phase of the Red Kite reintroduction in the area and so the Argaty Red Kite Project was born, Lynn and her family became strong advocates for the species and are now running a successful viewing facility for people to see and learn about these magnificent birds.

Lynn joins us today to share with us the unique history of Red Kites so we can better understand what Shakespeare was referring to when he invokes their reputation in his plays.

Connect with Argaty Red Kites, and plan your visit to see this amazing birds at any of these links:

In this episode, I’ll be asking Lynn Bowser about :

Approach, there! Ah, you kite! Now, gods
and devils!

The Red Kite is absolutely the bird Shakespeare was talking about in his plays. In medieval times in Scotland, they were persecuted under vermin laws. At the same time in England, Kites were protected by Royal decree, because they were great at cleaning up the streets and ridding them of things like rats which helped spread plague.

The Tudor vermin laws came into play under Henry VIII and Elizabeth I. More people were living in towns and cities, and after a series of bad harvests, the specter of famine was very real and anything that threatened the food supply was highly unpopular. Despite the fear of food scarcity, the role kites played in agriculture carried divided opinions, based on where you lived. Townsfolk were more worried about the spread of plague and wanted the kites to kill off the vermin, where country folk were the ones responsible for producing grain and wanted the kite to be gone since it was impacting their growing season, which was already under strain.

In the 16-17th century, the term vermin came to be associated with the poor, as a derogatory term for the section of society most often plagued by vermin. Anything that was thought to be a competition to the production of food in Tudor England, would be declared “vermin” and then hunted proliferously. The red kite was declared a vermin during the Tudor period, and as a result would be hunted to near extinction by the 20th century. Part of the work Argaty Red Kites is doing in central Scotland is to try and revive the dwindling population, with great success.

I' the city of kites and crows.
Coriolanus

Photo of a red kite in flight from Argaty Red Kites website.

What do Kites eat?

Kite’s are carrion eaters, but they are not neccesarily hunters. While they are capable of hunting it, they prefer to eat something that has already been killed by something else. So when Shakespeare talks about a kite and an “unbloodied beak” he's referencing the fact that kites will eat meat, but the reputation of being a killer is all a show.

For a bird that has just killed something, you would expect it to be covered in blood. However, in the case of a kite when you come up on it, the bird looks like a fierce hunter since it is eating a dead animal, but it is not covered in blood, since the kite wouldn't have killed another animal.

In Shakespeare's King Lear, Lear describes his daughter Goneril as a detested kite, and in A Winter’s Tale, Shakespeare’s Autoclytus says “when the kite builds, look to your lesser linen” which is a reference to kite’s reputation for stealing washing hung out to dry in the nesting season. Lynn shares with us that they have a washing line hung out for the kites at Argaty Red Kites and the birds often steal things from the line to use in their nests.

So it seems that while perhaps the birds are more protected and appreciated today than in Shakespeare's lifetime, the reputations we learn of the bird from his plays are accurate representations of their behavior even today.

for it cannot be But I am pigeon-liver'd and lack gall To make oppression bitter, or ere this I should have fatted all the region kites With this slave's offal.
Hamlet

“The Wedding at Bermondsey”c. 1569 by Marcus Gheeraerts The Elder. This painting illustrates a panorama of society in the reign of Elizabeth I of England, who may be the lady being escorted from the church at the right. detail shows red kites flying overhead. Source

Today, as in the 16th century, the kite's reputation as vermin persists. Many beilieve the bird causes a large agricultural impact, which leads farmers to poison them. Lynn defends the Red Kite's reputation by pointing on that while they are quite large in breadth, they are mostly wings and tail. Their actual bodies are small, and she compares their body to a bag of sugar. Additionally, rather than being hunters who would kill, they are scavenging birds taking off worms or frogs, but never rabbits or hens that you might expect a farmer to want to defend against the kites. If they aren't capable of hailing off a hen, it follows that they certainly aren't capable of doing a way with a lamb, which was the main agriculture source in England during Shakespeare’s lifetime. Even when it comes to crops, the kite is not a threat to bread crops either, since they do not eat wheat, barley, or other grain crops. Lynn suggests that perhaps the fear of the kite's impact on agriculture in the 16th century was, and remains today, unfounded.

Kites were hunted to extinction due in part from the Tudor vermin laws which desginated them a threat to be exterminated, and the reputation of that designation persists into modernity, with the main threat to today's kite population being rural residents who are trying to protect their game birds. In Scotland, the kites face a poison threat, and raising awareness to try and reverse their reputation and preserve the kite population in Scotland is one of the main goals of Argaty Red Kites.

Want to learn more about Shakespeare and Hawks?

Join the newsletter and download this free infographic featuring facts about Elizabethan hawks
and the uses of falconry terminology from Shakespeare's plays. 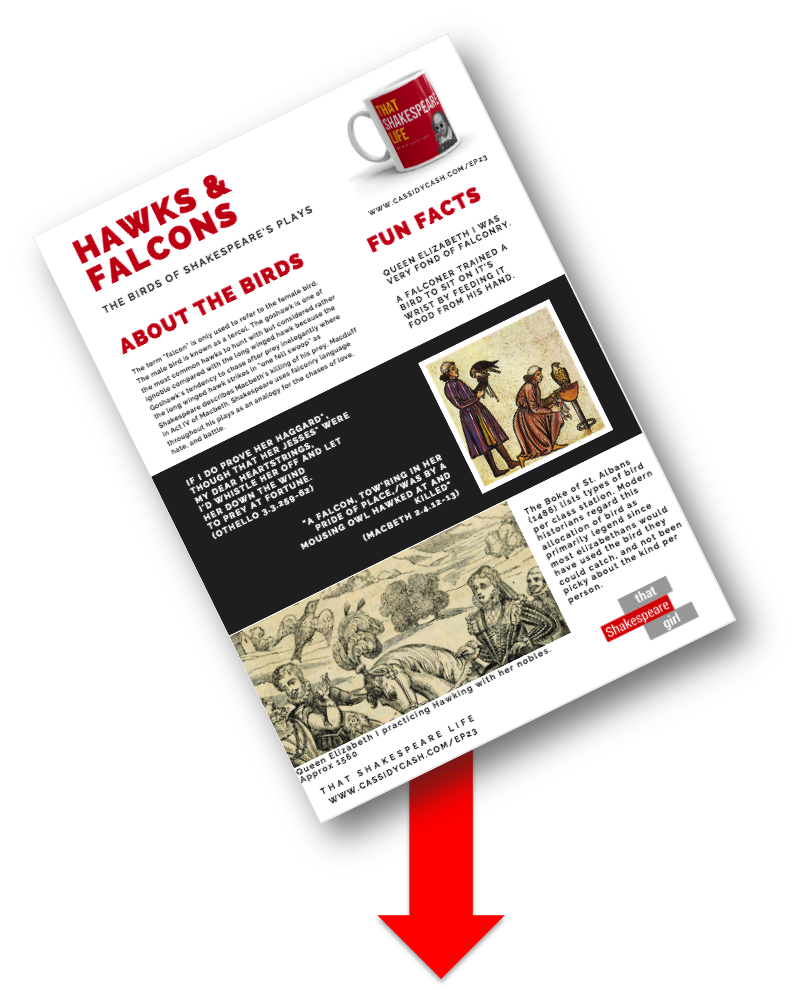 Who finds the partridge in the puttock's nest, But may imagine how the bird was dead, Although the kite soar with unbloodied beak? Even so suspicious is this tragedy.
Earl of Warwick

Elizabeth I hunting with falcons.”Elizabeth I out Hunting” woodcut from “The Booke of Hunting” The British Library Source

While hawks were far superior to kites for use as hunting birds, there are some records of kites being used for hunting due to their large numbers and the 16-17th century fashion for hunting with birds of prey. There are conflicting reports about whether kites were really used widely for hunting, however. At least one historical writer records, in her interview with Emma Raphael of Raphael Historical Falconry, “The royals throughout the period hunted kites with Gyr Falcons because they were so numerous and there are lots of accounts of “kite hawking” in Londonshire, Cambridgeshire and Huntingtonshire.” (Source)

However, when I ask Lynn her perspective on that theory as an expert specifically in red kites, she disagrees. It definitely is worth noting that  we learn in our interview with David Horobin that Gyr Falcons are not at all the same bird as a Red Kite. Instead, a Gyr Falcon is quite large and capable of taking out the kinds of rabbits and squirrels you might expect to capture when you hunt with birds of prey. Additionally, as Lynn teaches us today, red kites are not physically suited to hunting. Certainly not as well suited as hawks or falcons. Not only are kites scavengers more than they are hunters, preferring to eat a meal which has already been killed and left abandoned, but they are pretty small. Their nimble stature makes it difficult for them to catch or carry off any prey. They are good at catching small vermin like mice, but were not very good at hunting larger prey.

Want to learn more about Shakespeare and Hawks?

Join the newsletter and download this free infographic featuring facts about Elizabethan hawks
and the uses of falconry terminology from Shakespeare's plays.