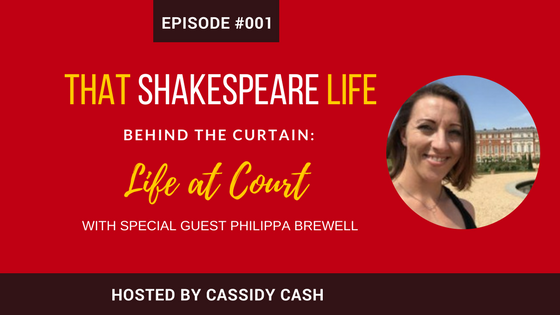 Let's explore Life at Court! Welcome to Episode #001, the Pilot Episode, of That Shakespeare Life, the podcast that takes you behind the curtain and into the life of William Shakespeare.

I believe that if you want to understand Shakespeare's plays, then understanding the life of William Shakespeare is essential. This podcast will help you explore early modern England as Shakespeare would have lived it by interviewing the historians, performers, authors, and experts that know him best.

To get started, we dive into the world of life at court. For instance, William Shakespeare performed many times “at court” before Queen Elizabeth. Later, under the official royal patronage of King James, Shakespeare enjoyed a prosperous career. But what was life at court really like?

Our guest this week, Philippa Brewell, owner and lead historian at British History Tours joins us this week to set the stage and share with us what Shakespeare would have experienced when appearing at court.

Philippa Brewell specializes in helping historians of all levels explore the real places behind the history you read about through expertly curated tours, and most recently, an online membership forum featuring expert interviews, virtual tours, and printable guides to the world of British History. Learn more about British History Tours here.

Inside this episode, I ask Philippa about:

Get Detailed Show Notes as a Patron

Patrons can expand these show notes and reveal bonus history research!
Not a patron? Sign up today to access these and all 200+ detailed show notes available from That Shakespeare Life

What is Court, anyway?

For a monarch to “hold court” was essentially anywhere the monarch was at the moment when they decided to hold proceedings. Courtiers were people who travelled around with the monarch as ambassadors, gentlemen, ladies of status, and other politicians in the country.

Whitehall Palace was the main palace where Queen Elizabeth's court sessions were held but she could hold court anywhere she was physically located.

What was the point of life at court?

Would Shakespeare have appeared at court?

The portrait above of William Shakespeare performing for Queen Elizabeth I is entirely fictional, but it remains one of my favorite portraits associated with Shakespeare's history. While the bard may not have performed for Elizabeth the way this picture shows (though he might, we really don't know), what we do know is that Shakespeare's playing company was frequently requested to perform for the queen. It is plausible to think Shakespeare would have been with the company on more than one occasion for these performances.

It's equally true that performing before the royal court was a very intimate affair. There was usually a section of a large room that would be retrofitted to suit a performance, but there would not have been risers or other kinds of bleacher type seats (beyond what would have been provided for the rest of the Queen herself). The audience would be crowded around the performance space and the actors situated a mere inches from their audience. If Shakespeare was there, the Queen could hardly have missed his presence.

You can join British History Tours membership and get great discounts on Philippa's travel tours, not to mention the enormous fun of learning history in a fun, dynamic, atmosphere, all by joining now! She's running a special for the next few months where your first month as a member is just £1 (that's $1.40 USD), cancel anytime. When you join, tell her That Shakespeare Girl sent you!

Episode #19: Becoming Friends With Ben Jonson | An interview with Helen Ostovich
Ep 172: Roderigo Lopez with Susan Abernethy
This content is available exclusively to members of this creator's Patreon at $0 or more.