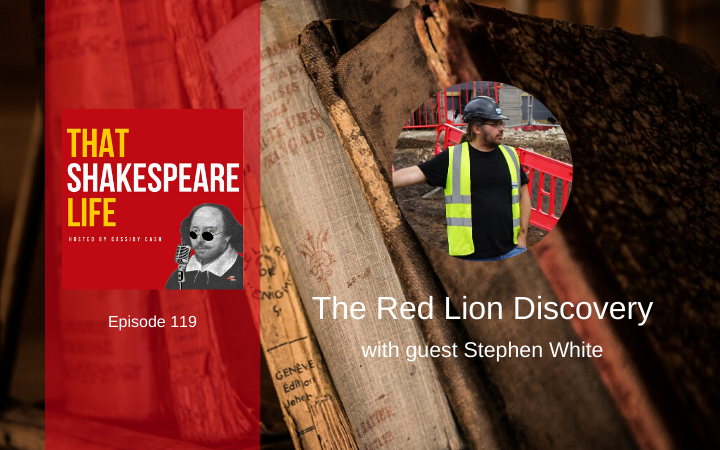 Welcome to Episode #119 of That Shakespeare Life, the podcast that takes you behind the curtain and into the life of William Shakespeare.

Underneath a housing redevelopment in Whitechapel, England, archaeologists have unearthed what is believed to be the remains of The Red Lion theater. The Red Lion predates Shakespeare’s Globe and is thought to be the earliest purpose built theater known to have been built in the city since Roman-times. Built by John Brayne in 1567, the Red Lion was a predecessor to Brayne’s next construction on The Theatre in Shoreditch which was owned by James Burbage and completed almost a decade later, in 1576.

The Red Lion represents the start of a new movement in London which would give foundation to the budding career of a young William Shakespeare, in that this was the first time in modern history anyone was trying to provide a permanent home for the popular Tudor playing companies who up to this point were housed at various houses, inns, and other venues as a strictly travelling troupe. To create purpose built theaters was a unique change in the early modern theater industry that invited patrons to come to the theater instead of the other way around.

Other than brief mentions in two lawsuits from the time period, there has not been much information to inform our understanding of this groundbreaking theater, until now. In January of 2019, a team of archaeologists with Archaeology South-East, part of University College London’s Institute of Archaeology, began excavations that revealed 144 timbers thought to make up the scaffolding of the Red Lion’s stage..

The director of the project, Stephen White, is here today to tell us about the dig, what they have found, and what we now know about the Red Lion based on their history discovery. 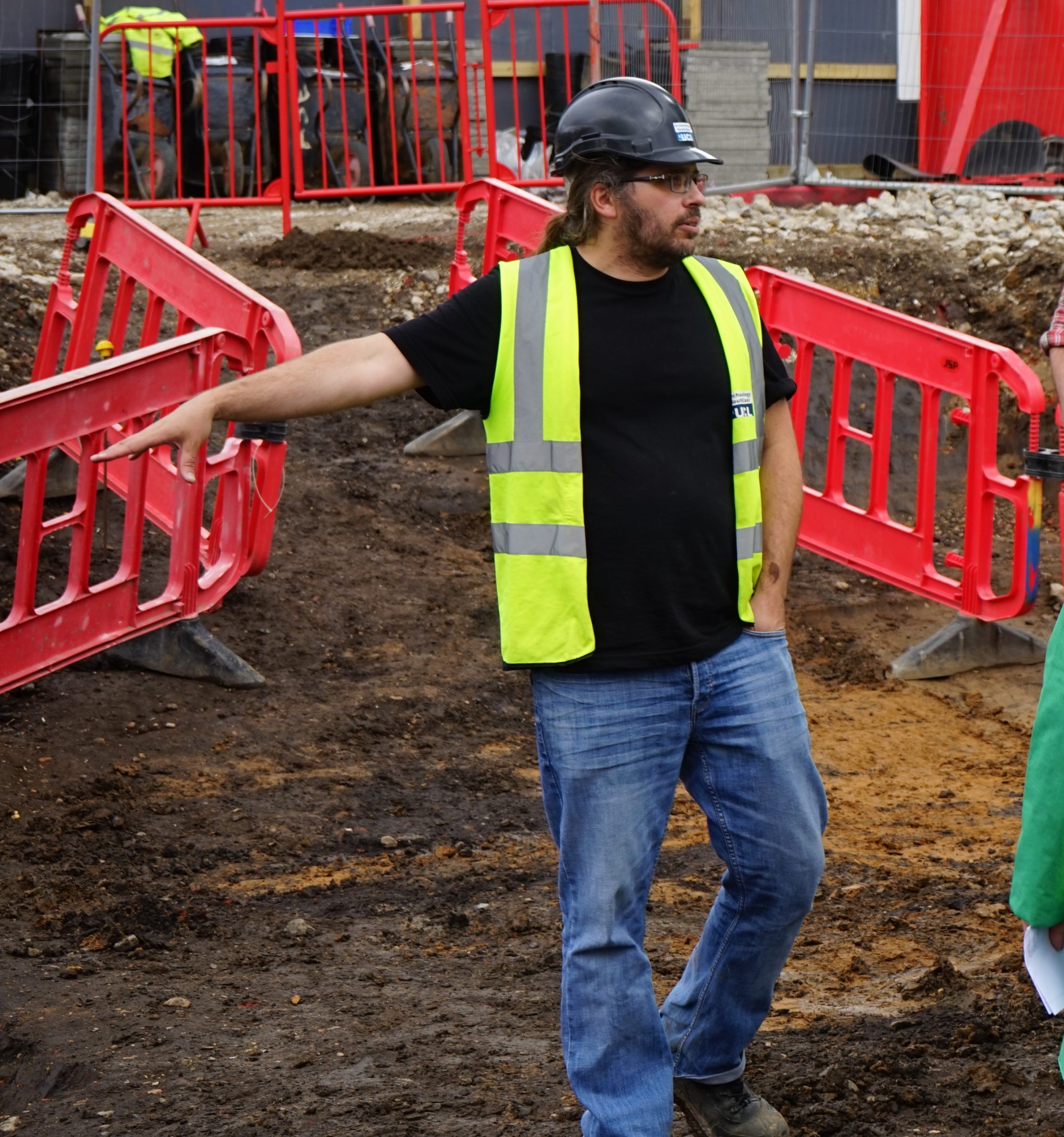 Stephen White is an Archaeologist at Archaeology South-East (UCL Institute of Archaeology). He has worked in archaeology for 14 years, predominantly in London, spanning Roman London city sites, Henry VIII dockyards, hidden tombs of archbishops, and the occasional large multi-phase site in East London. In 2019, he was the lead archaeologist on the project at Whitechapel, England, which uncovered the site of the Red Lion Theater.

In this episode, I’ll be asking Stephen White about : 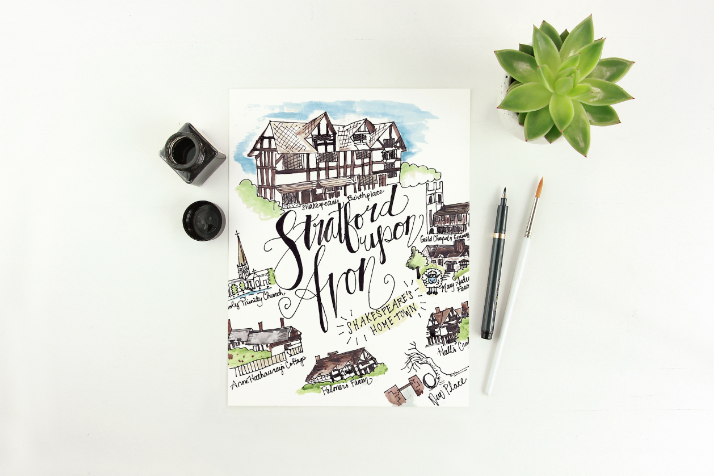 It is to be recovered…

When I first started studying Shakespeare, The Globe was often trotted out as the first purpose built theater in London. (Depending on where you read about Shakespeare some even claimed the world–but that's quite too far afield.)

The real first at building a purpose built theater in London was when the Red Lion was constructed. It does still connect with Shakespeare's history, and even the history of The Globe, however, because as Stephen White shares with us today, the Red Lion is considered a prototype for both The Theater and The Globe.

The Red Lion appears to have been mildly successful, and continuously running for longer than was first imagined; based on archaelogical evidence at the dig Stephen directed they can demonstrate someone was enjoying tankards of ale there well into the 1590s. However, despite it remaining operational, the Red Lion was not nearly as successful as The Globe. It can claim to have been responsible, at least in part, for The Globe succeeding, however, because it appears that John Brayne's experience with the Red Lion would inspire him to go on and build The Theater in Shoreditch with James Burbage, the same The Theater which would famously be dismantled and moved across the Thames to be reconstructed as The Globe in partnership with William Shakespeare. 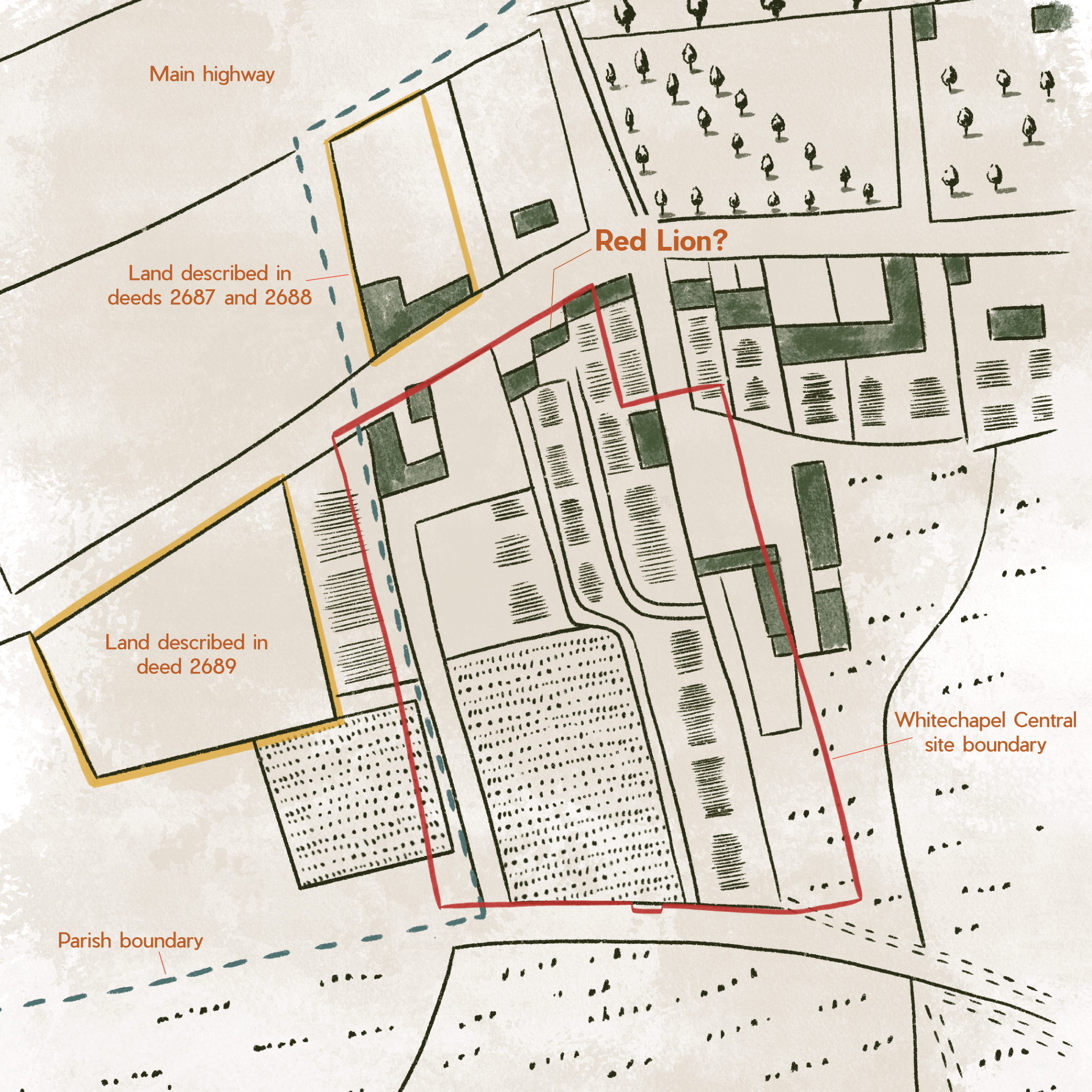 Image belongs to Archaeology South-East, UCL. Used by permission. This map shows how the archaeologists used historical land deeds to piece together where the probably site of the Red Lion might be located. They overlaid the maps of historical London onto the present day maps to pinpoint where they needed to dig in order to locate (hopefully!) the Red Lion remains. 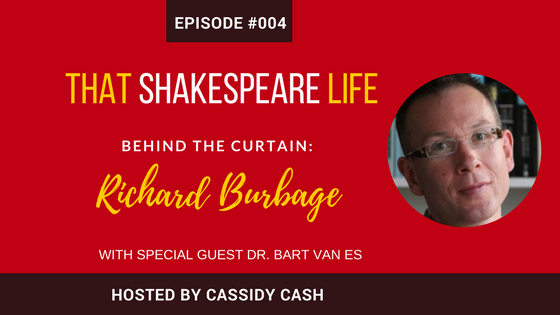 I will tell you the beginning, and, if it please your
ladyships, you may see the end; for the best is yet to do; and
here, where you are, they are coming to perform it. 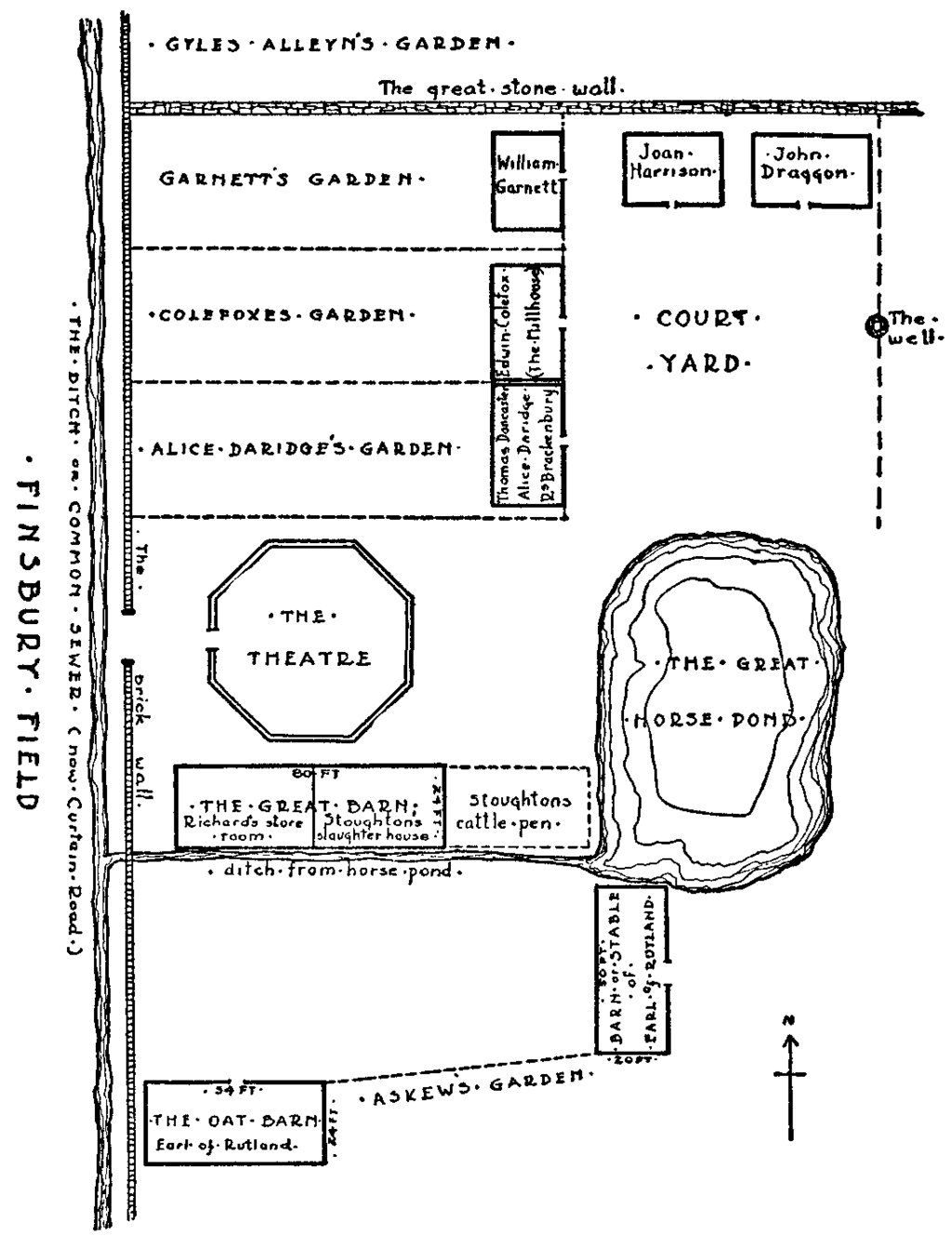 Site plan for Burbage's The Theater in Holywell, London. Ground plan of The Theatre. The “common sewer” is now marked by Curtain Road, and the “ditch from the horse-pond” by New Inn Yard. The Project Gutenberg eBook, Shakespearean Playhouses, by Joseph Quincy Adams. Source

One of the documents which helped Stephen's dig pinpoint the location of this find are lawsuit documents which survive where John Brayne was suing his carpenters for having done allegedly bad craftsmanship on the stage of his theater.

John Brayne was James Burbage's brother in law, and functions as something of a historical poster child for the perils of doing business with family. Brayne seems to have gotten the Burbages into a great deal of hot water legally in London, but it must have been more profitable than it was detrimental since the group of them, Brayne included, would together construct three theaters total over the last half of the 16th century.

If this should fall,
And that our drift look through our bad performance.
‘Twere better not assay'd. Therefore this project
Should have a back or second, that might hold
If this did blast in proof. 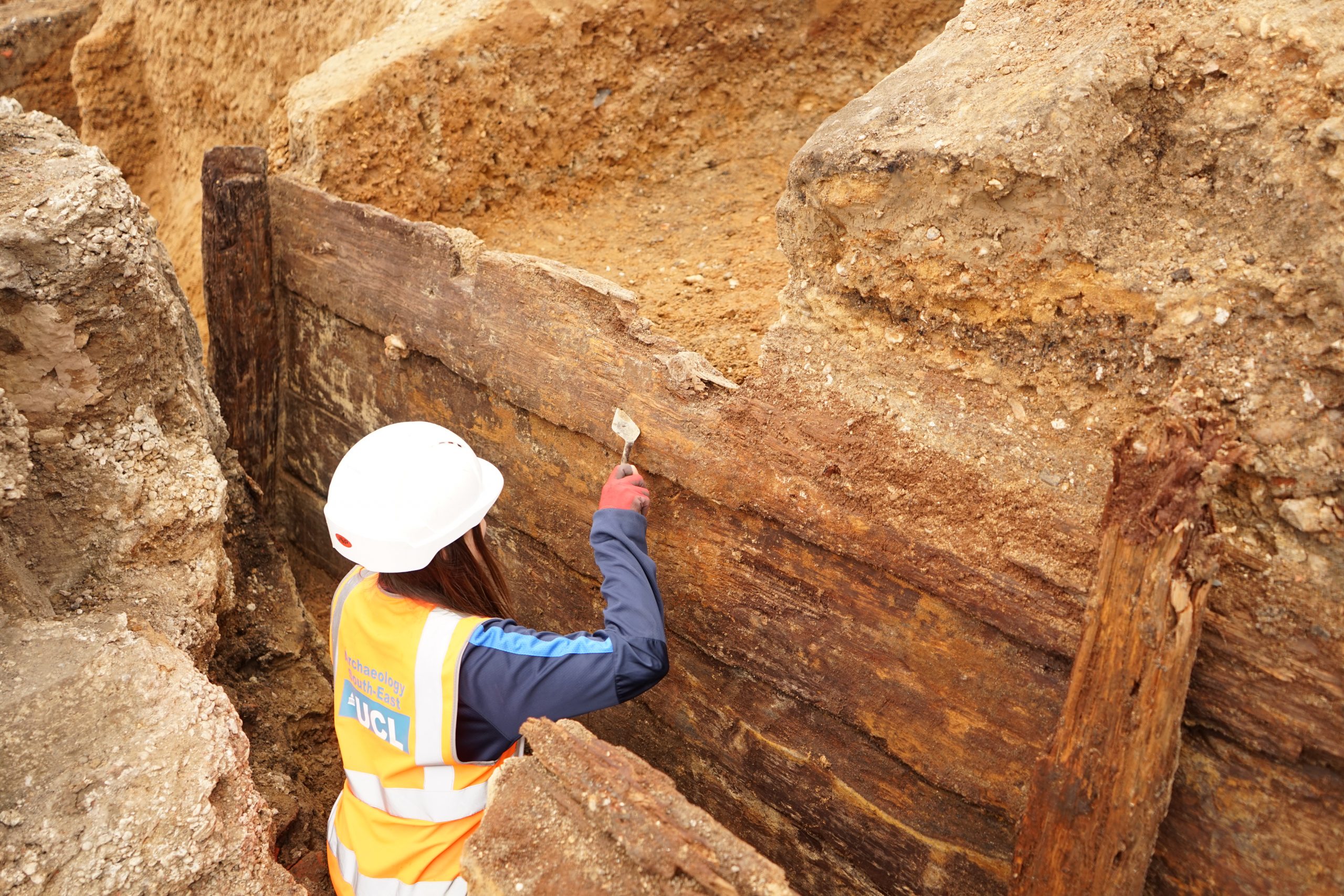 Photo provided and owned byArchaeology South-East, UCL. Used by permission. The photo depicts archaeologists digging the timbers at the site of the Red Lion uncovering a rectangular timber structure made up of 144 surviving timbers. This dig is conducted by Archaeology South East at the University College London.

Timbers from the stage

Among the first artifacts discovered at the site were 144 wooden timbers. The timbers were arranged in a large rectangular shape that matches what historians know about early modern stage structures. The rectangle was surrouned by holes in the ground, thought to be post holes, where the structure for supporting the tiered seating structure known as “Gallery seating” would have been placed. Wen they measured the rectangle, they established it was  12.3m (40ft) by 9.3m (31ft) which was encouraging to the archaeologists. As Stephen shares, those dimensions line up with the dimensions given in the lawsuits John Branye filed against his carpenter, and provided solid evidence they had found the Red Lion stage.

Photo by, and belongs to, Archaeology South-East, UCL. Used by permission. This photo depicts archaeologists digging in a beer cellar that was discovered on site. Beer cellars like this add to the evidence of the Red Lion being used for entertainment.

Related Products from That Shakespeare Shop:

Looking to learn more and explore further into the history of this week's topic? Here are some great places to start. 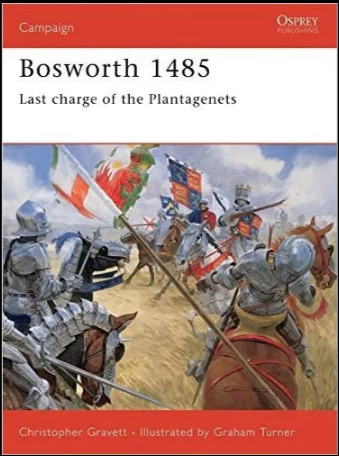 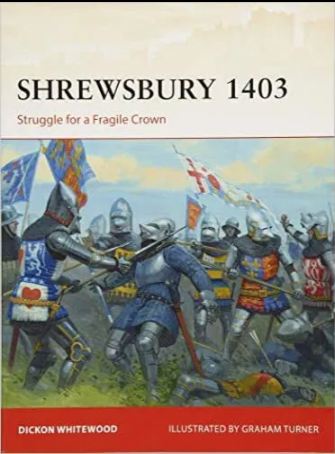 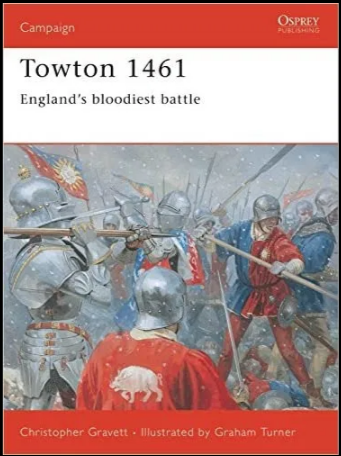 That's soon perform'd, because I am a subject. 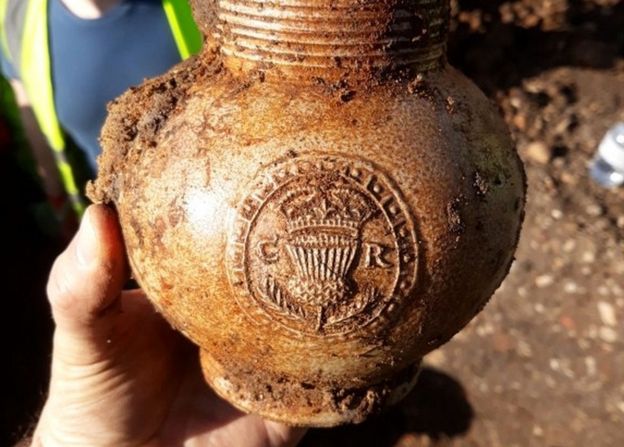 A late 17th Century tavern mug with a Royalist medallion of Charles II was found among beakers and tankards at the site. Source

Artifacts Recovered from the dig

As Stephen points out in this week's episode, in addition to finding numerous materials that were used to build the structure of the Red Lion, many of the artifacts they found at the site indicate how the space was used. There were several tankards, and other pottery, which are consistent with what Stephen calls “leisure fare” –or to put it plainly, exactly what you would expect to find at a 16th century theater.

The Red Lion was unique in that it was not located right in the heart of a bustling city, but it was located near other known performances spaces, like the Board's Head. To find gambling pieces, as well as beer tankards, and even a beer cellar, all suggest the Red Lion was a hot spot for performance and fun in the 16th century where travellers and locals alike could, and evidence suggests they did, stop in to see a play, or to drink, gamble, and even to see an animal baiting spectacle, as bones of horses are also among those found at the site, which Stephen says indicates this was likely a bear baiting arena when not being used for a play.