Episode #18: An Introduction to the Life and Work of Dr. John Hall, Shakespeare’s Son in Law | An Interview with Sara Read 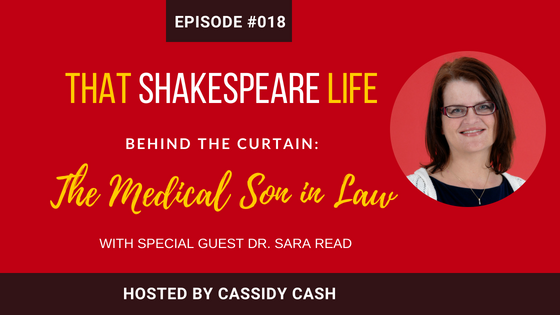 Welcome to Episode #018 of That Shakespeare Life, the podcast that takes you behind the curtain and into the life of William Shakespeare.

One of the people whose life helps us understand some key facts about William Shakespeare is the life of Dr. John Hall, the husband of Shakespeare’s oldest daughter, Susanna. John Hall was a physician, who mostly set up shop in Stratford Upon Avon and declared himself the town doctor since he was never formally educated in the field. Despite a lack of formal education, his practice thrived, and his surviving medical casebooks give us a unique look into the life of William Shakespeare, whose family (and likely Shakespeare himself) were patients of Dr. Hall.

Dr. Sara Read is a specialist in early modern health and medicine. Her early work focused on the reproductive health of women in the 16th century, while most recently she has co-authored a popular book on the history of 16-17th century disease and illness called Maladies and Medicine: Exploring Health and Healing, 1540-1740. Sara joins us today to focus on one of the topics covered in her book: the life and practices of Shakespeare’s son in law, Dr. John Hall, and what studying his life can tell us about William Shakespeare.


Join the conversation below.
Subscribe
Itunes | Stitcher | TuneIn | GooglePlay | iHeartRadio
Dr. Sara Read is a lecturer in English at Loughborough University and is a specialist in early modern health and medicine. Her first academic monograph along with her history publication from 2015 focused on the reproductive health of women in the 16th century, while most recently she has co-authored a popular book on the history of 16-17th century disease and illness called Maladies and Medicine: Exploring Health and Healing, 1540-1740. Sara and her co author were featured in Shakespeare Magazine’s 13th Issue, which came out this year, sharing some of the more bizarre medical practices which were common in Shakespeare’s lifetime.
In this episode, I’ll be asking Sara about :

These are affiliate links to the books the guest recommends in today’s episode.

To learn more about today’s topic:
The Shakespeare Circle by Paul Edmondson and Stanley Wells
John Hall and his patients: The medical practice of Shakespeare’s son-in-law by Joan Lane

Sara Hall’s personal recommendations of books she thinks you should read:
Common Bodies by Laura Gowing
The Weaker Vessel: Woman’s Lot in Seventeeth-century England by Fraser, Lady Antonia
The Midwives Book: Or the Whole Art of Widwifry Discovered (Women Writers in English 1350-1850) by Jane Sharpe, Edited by Elaine Hobby