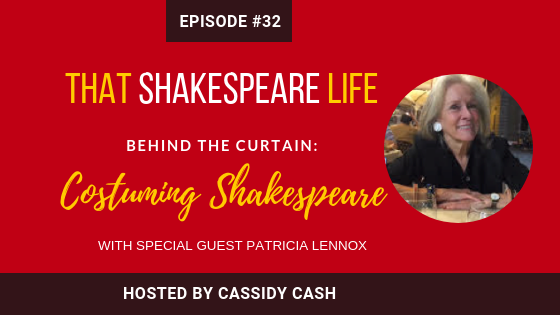 When it comes to Shakespeare’s costumes, the stage directions rarely, if at all, are the costumes of a particular play detailed out. Of course his characters wore costumes, and used props, but exactly what were they? And why does it matter?

<iframe style="border: none" src="//html5-player.libsyn.com/embed/episode/id/7602245/height/90/theme/custom/autoplay/no/autonext/no/thumbnail/yes/preload/no/no_addthis/no/direction/backward/render-playlist/no/custom-color/cc0014/" height="90" width="100%" scrolling="no" allowfullscreen webkitallowfullscreen mozallowfullscreen oallowfullscreen msallowfullscreen></iframe>
Patricia Lennox teaches at the Gallatin School of New York University and has been a Global Lecturer at New York University sites in London and Florence, Italy. She edited As You Like It for New Kittredge Shakespeare Series. Her articles are included in multiple books about William Shakespeare, including the one she co-edited, which we’ve invited her to talk with us about today titled “Shakespeare and Costume”, which came out in 2015. Patricia’s article in that collection focuses on the character of Juliet’s Nurse and how costume helped that character develop her iconic personality. Today, Patricia will be taking us behind the curtain to look into the wardrobe department for William Shakespeare’s theaters and explore how the bard handled costuming in the 16th century.

In this episode, I’ll be asking Patricia about : 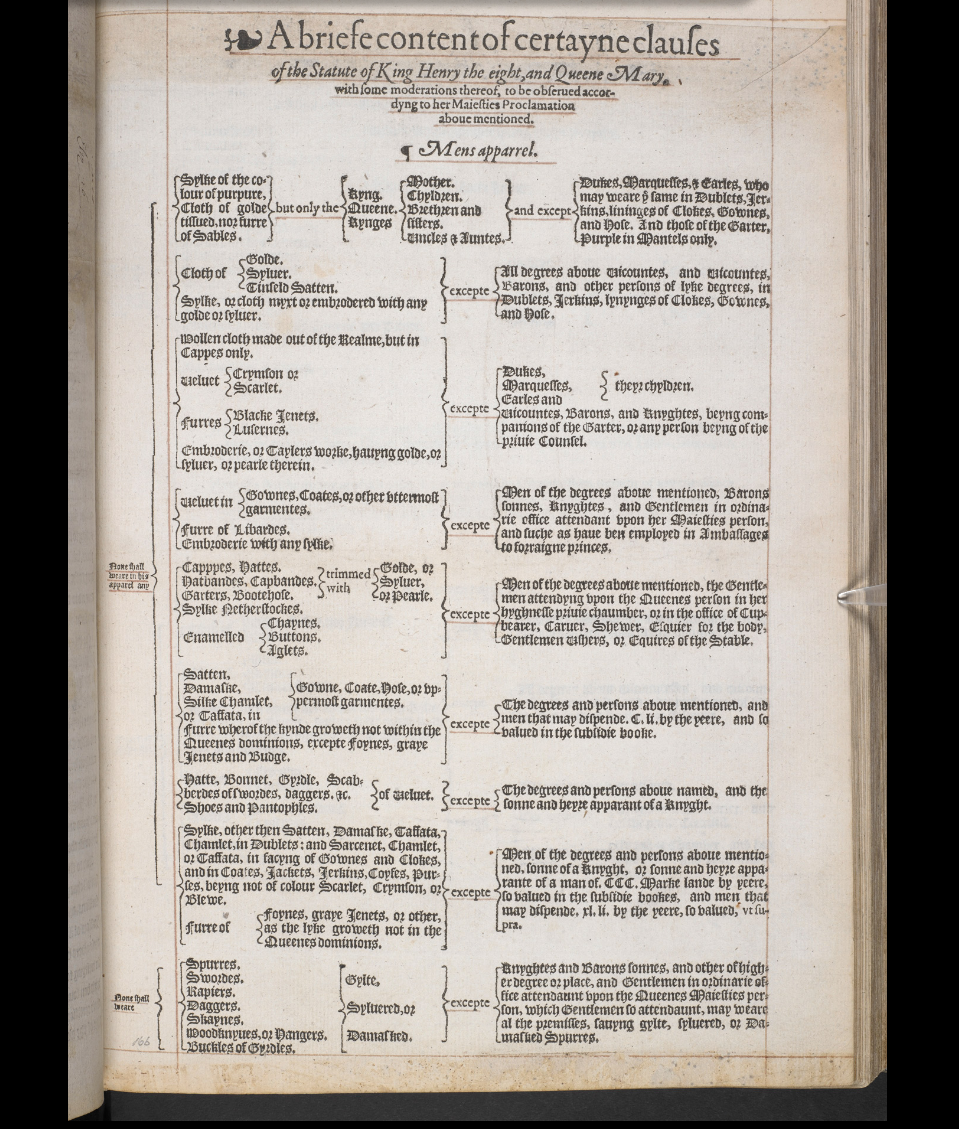 “A Booke containing all such Proclamations, as were published during the Raigne of the late Queene Elizabeth” dated June 15, 1574, and listed as published 1618. Held at The British Library. Source

Under Elizabeth I, there were powerful sumptuary laws that forbid a person from dressing outside of their station. That meant that you could recognize a person's status in society just by their clothes. For William Shakespeare, this societal reality translated to the stage because whenever you wanted to portray a certain character, like a monarch, on the stage, there was literally laws about exactly what kind of costumes those characters needed to be wearing in order to be dressing like a King, Queen, or noble.

This Royal Proclamation is about clothing excess. From 1574, these laws established specific dress codes which detailed right down to the color, fabric, and accessories every individual in English society could wear, or was forbidden to have on them. Every item that people were allowed to wear was based on their social rank and affluence. This set of specific laws were called sumptuary laws. Economically, Elizabeth enforced them in order to regulate spending and try to prevent widespread purchases on luxuries. On the stage, it meant costumes often had to get creative.

The more expensive fabrics like gold, saw heavy restrictions placed on which members of society could wear them. Long before Elizabeth clothing was used as a way to indicate one's rank in society, but likely one event that influenced Elizabeth's focus on sumptuary laws was that during the reign of her father, Henry VIII, the wealthy merchant class who could afford more luxurious accessories started dressing like the nobility and thus challenged the overall social order. Not to be tolerated, restrictions on clothing was one way of controlling and maintaining the social hierarchy.

More practical that just control, there was one group of young young gentlemen who had a type of clothing habit where they would run themselves into massive debt from excessive spending. Intended to curb that spending, many of the proclamations against excess spending on apparel which Elizabeth would publish during her reign, were targeted at preventing crime as well as to prevent the upset of social order, deemed essential by Elizabeth and society of the day. Similar clothing laws were passed to try and boost the economy and encourage the purchase of certain materials. For example, there was a law passed that people had to wear a wool hat on certain days in order to increase spending in the textile industry. The upper classes of society were exempt from following such laws.

Shakespeare uses costumes, and the commentary on clothes, as fodder for commentary on this general societal hypocrisy.  In King Lear, Goneril's servant Oswald dreams of living above his station, and when he gets in a fight with Kent, Kent uses clothing based insults to try and establish dominance. The idea is that if we can demonstrate through clothes that Oswald is more lowly than himself, then he doesn't have to worry about Oswald usurping his station. Kent says:

and again, he suggests he's afraid Oswald might move up in status and thus wields the insult: 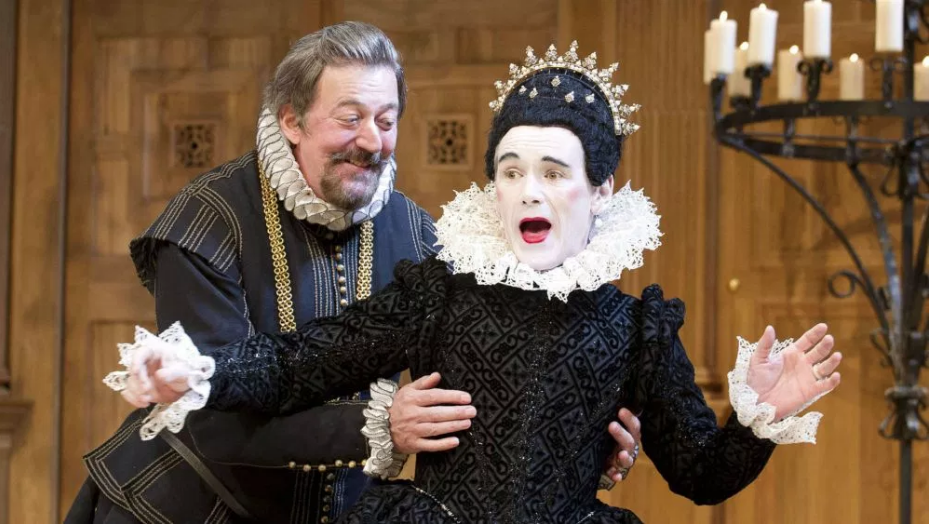 Published in Variety January 9, 2014, by Gordon Cox. “Bard in the Black on Broadway: ‘Twelfth Night’ and ‘Richard III’ Recoup” Mark Rylance in full Elizabethan dress for an all male production of Twelfth Night. His costume follows original practice techniques, designed to recreate the conditions William Shakespeare would have used in the 1600s.

King Lear himself comments on the hypocrisy of clothing and costumes:

In Macbeth, Angus uses  a reference to clothing to question Macbeth's fitness for his role, suggesting his clothes hang loose ‘like a giant’s robe / Upon a dwarfish thief’ (5.2.21–22).

In Twelfth Night, there are ample references to clothing and their establishment of rank and through them, the realization of opportunity as we mercilessly watch Malvolio's descent into disgrace from respected household steward to prisoner in jail, due in part to his ostentatious choice to wear yellow cross gartered stockings, a challenge for any stage to portray in costumes. 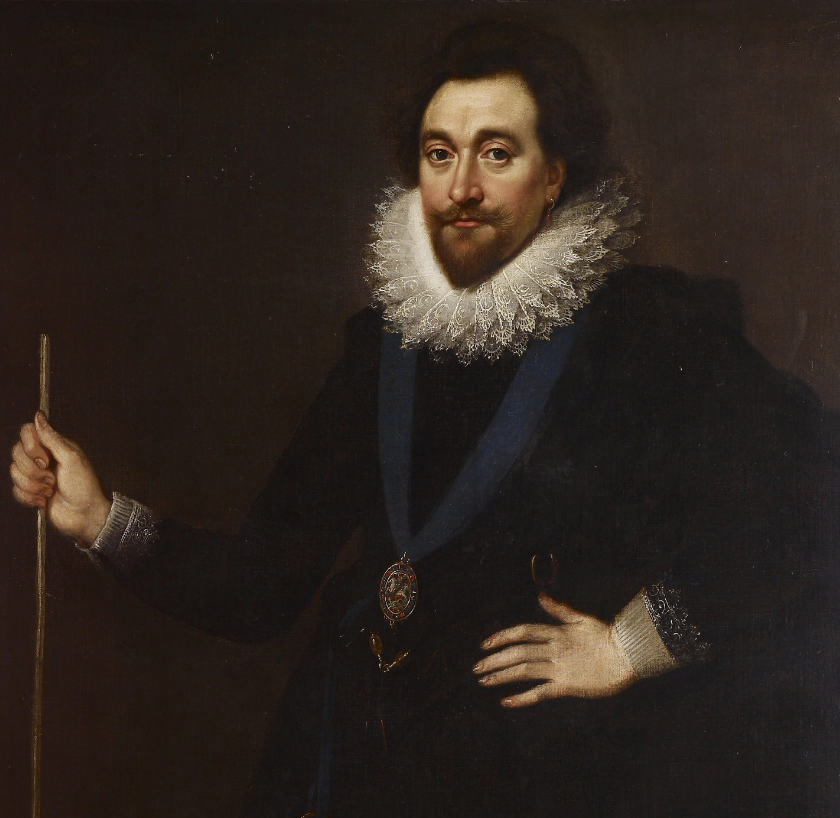 William Herbert, 3rd Earl of Pembroke (1590-1630) with ribbon of the Garter; he holds the white staff, and at his waist hangs the key of office, of Lord Chamberlain. Royal Collection Trust © Her Majesty Queen Elizabeth II, 2016 / Bridgeman Images.

Even the small items were significant

William Herbert was the 3rd Earl of Pembroke and a patron of The Lord Chamberlain's Men. He was a favorite at King James' court, and Shakespeare's First Folio features a dedication to him. In this portrait, you can see that even small details of clothing, costumes, and accessories were significant and included for the purpose of establishing rank in society.

The white staff he is holding represents his position as Lord Chamberlain while the blue ribbon shows he was a Knight of the Garter. The painting was completed in 1617 by Paul van Somer, an artist at King James' court.

One interesting reality brought to Shakespeare's stage by fashion and clothing laws in Elizabethan England was that characters on stage were often compelled to wear the fashion of the day as opposed to the fashion which was historically accurate.

This reality was in place due in part to the acquisition of accessories and clothing–the actors had to use what they could find. Not being museums, but instead performance houses, acquiring historical accurate representations of characters had its' limits. Additionally, portrayal of characters on stage had to be believable to an Elizabethan audience, which meant when certain moods or dispositions, even foreshadowing of behavior, called for including the societally expected accessory, Shakespeare built that into the scene, even if it was not historically accurate. 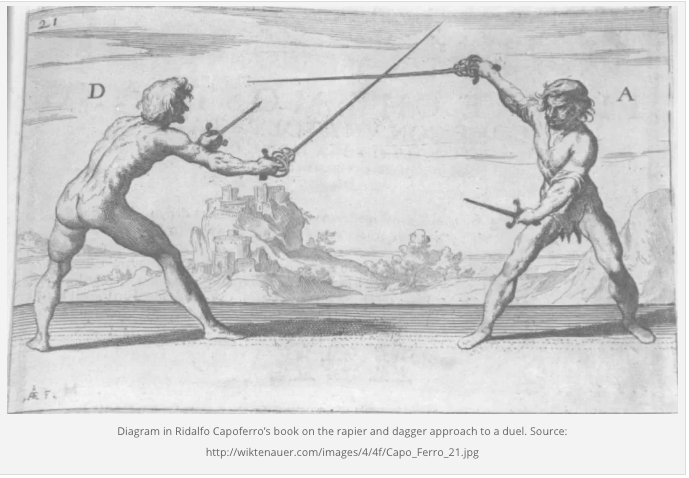 Image: I wrote a large article on Rapier and Dagger method, including history of 16th century fencing masters active in London during Shakespeare's lifetime, like Capoferro, whose work is pictured here. Sources and more information on rapiers and daggers (and the famous line from Hamlet!) in this article here.

For example, in Hamlet, the fight scene with Laertes calls for “rapier and dagger” both in the dialogue of the play as well as the stage directions. However, in the 15th century Denmark where the play was supposedly set, that style of fighting was not popular, and indeed would not have been used by a Prince of Denmark. The rapier and dagger method for dueling, in fact, had a very short window of popularity in England, coinciding almost exactly with the 50 years Shakespeare was writing plays. Learn more about Hamlet and the Use of Rapiers Here. 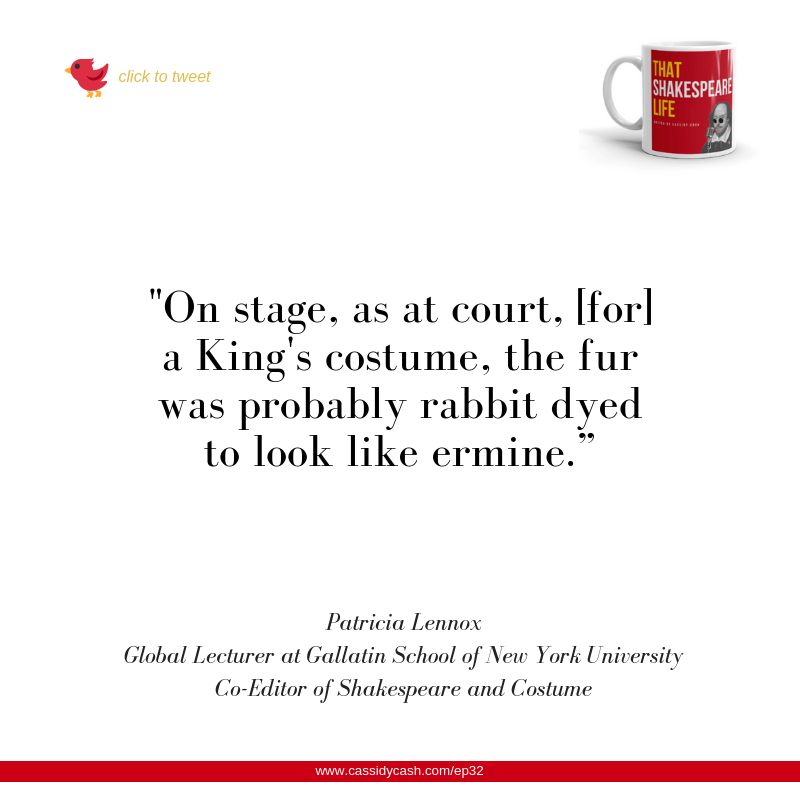 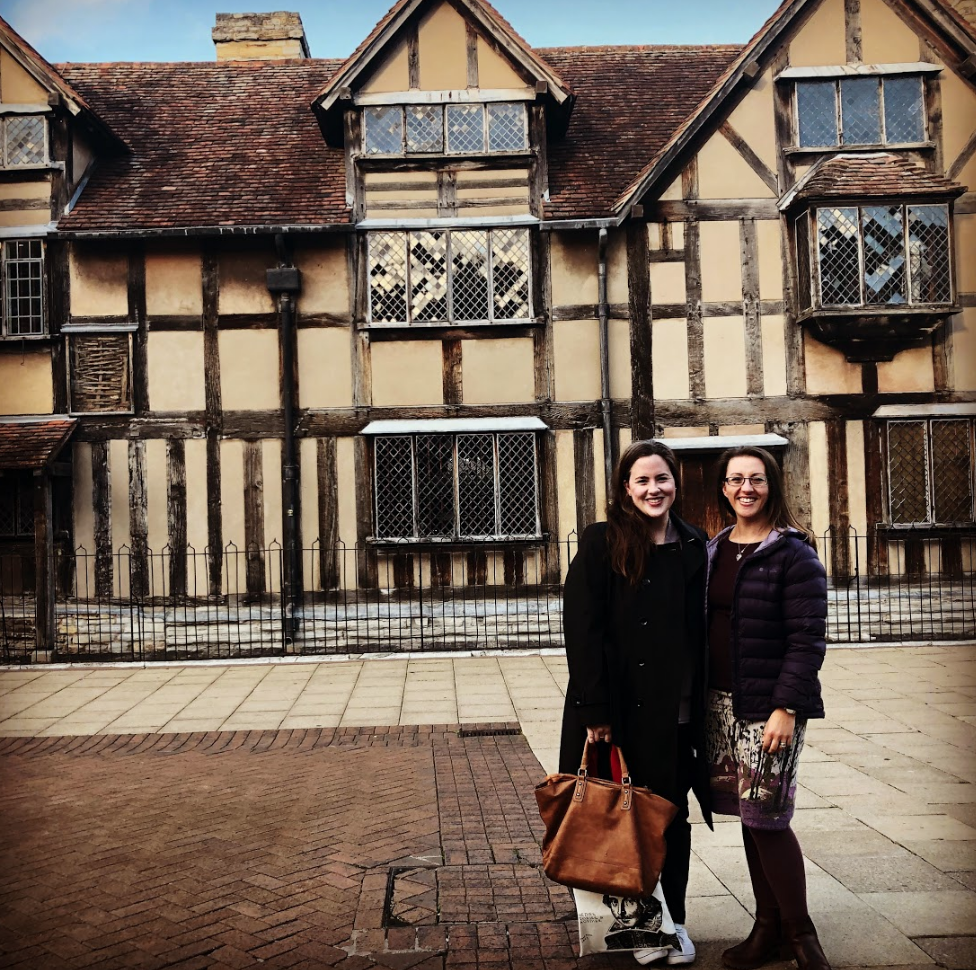