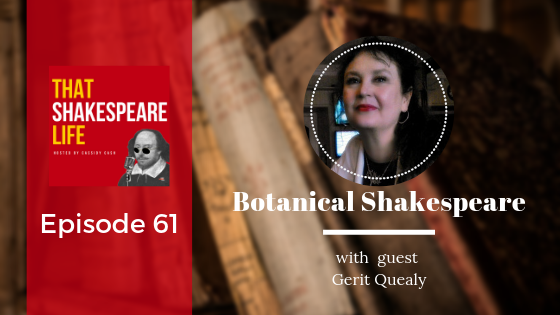 Welcome to Episode #61 of That Shakespeare Life, the podcast that takes you behind the curtain and into the life of William Shakespeare.

There are close to 200 plant references in Shakespeare’s plays, with the bard mentioning herbs, spices, as well as the iconic roses that was such a plague to Juliet in Romeo and Juliet. With the massive amount of exploration and import of foreign goods that was exploding in England during Shakespeare’s lifetime, many of the plants mentioned by the bard were being seen in England for the very first time.

Motivated to explore exactly how many Shakespeare did mention across 37 plays and hundreds of sonnets, our guest this week, Gerit Quealy is the author of Botanical Shakespeare, a very detailed compilation text featuring illustrated versions of the plants from Shakespeare’s plays and she joins us this week to explain some of the history of plants in England, which ones were native to England, and how the bard knew about some of the more exotic herbs and plants mentioned in his plays. 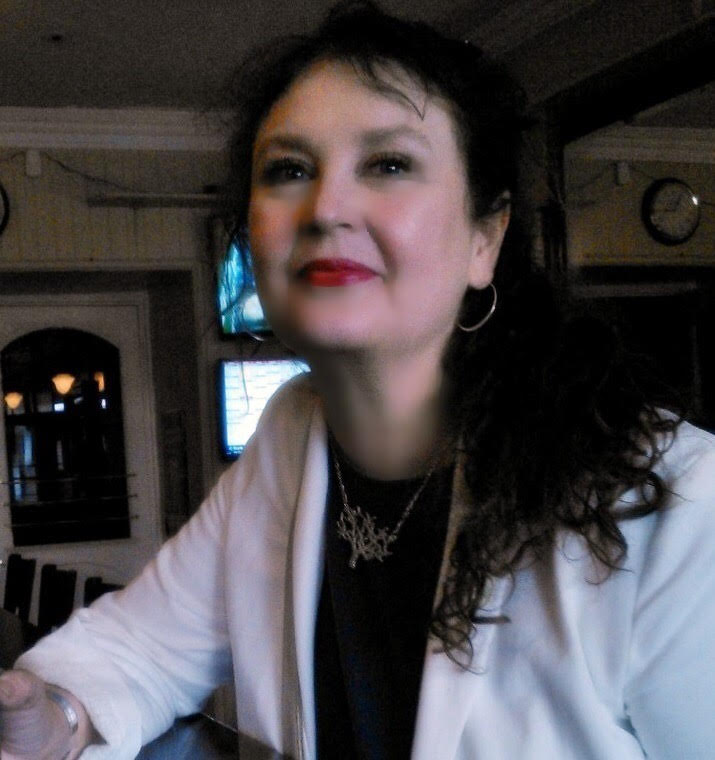 Gerit Quealy is the author/editor of Botanical Shakespeare from HarperDesign /HarperCollins, out April 4, 2017. As a journalist, she has covered everything from lipstick to Shakespeare, with pieces ranging from dollhouses to birdhouses; beauty, brownies, and brides, in outlets including The New York Times, Country Living, Woman’s Day, Modern Bride, etc. She’s had her hand in a number of other books, which pulled in former stints as actor & model, but her overriding passion is for history (& paleography), embracing the Renaissance tenet of ‘Learning through Delight’ — to that end she is currently at work on a TV docu-series, FLOTUS: Playing the Woman Card in the White House. Learn more about Gerit here.

In this episode, I’ll be asking Gerit about :

Now ’tis the spring, and weeds are shallow-rooted;
Suffer them now, and they’ll o’ergrow the garden
And choke the herbs for want of husbandry.
Queen Margaret 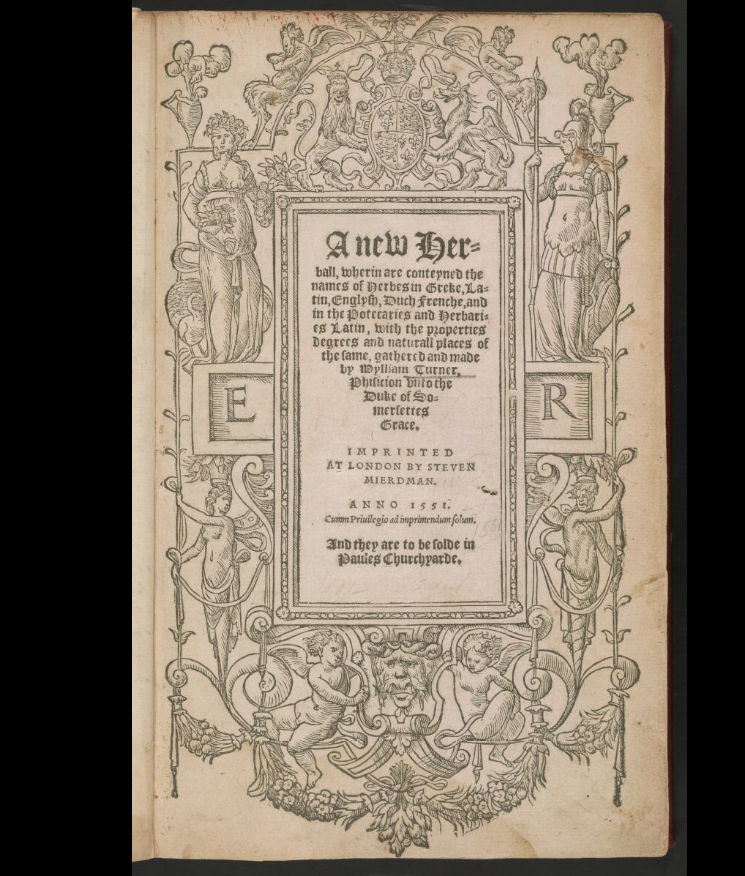 Title page of William Turner’s “A New Herball” Imprinted at London : By Steven Mierdman …, anno 1551-1562. Source Library of Congress. Special note to the inscription that reads “And they are to be sold in Paulies Churchyarde” Source

PLants were a popular subject during Shakespeare’s lifetime. It was both a natural exploration of things around you, as well as a product of the explosion of imports from foreign lands that lead many living in 16-17th century England to ask great questions about plants and what they could be used to accomplish.

Originally, the plant texts artists like William Shakespeare might have consulted to learn about botany and plant husbandry were written in Greek/Latin. A person looked very smart and current with the times if they could grow these in their own garden. Having fashionable plants in your garden was akin to wearing the right brand labels on clothing today. The plants that carried a certain reputation carried over to the owner of the garden where said plant was grown.

When the plants were popular, people started caring about them decoratively as well as practically for food/medicine.

Elizabeth I, in particular, was fond of translating ancient texts into English and wanted a vernacular culture to translate foreign material, including old herballs, and promoted the idea that individuals like John Gerard, should write their own books on plants. Her cultivation of the writing world and translation of texts furthered the exploration of plants in England, and ironically, made the environment ripe for Shakespeare to use references to these plants being explored all around him.

William Turner is known as the Father of English Botany and his book, A New Herball, was written in English and is dedicated to Elizabeth, his house is now for sale.

Drop tears as fast as the Arabian trees
Their medicinal gum. 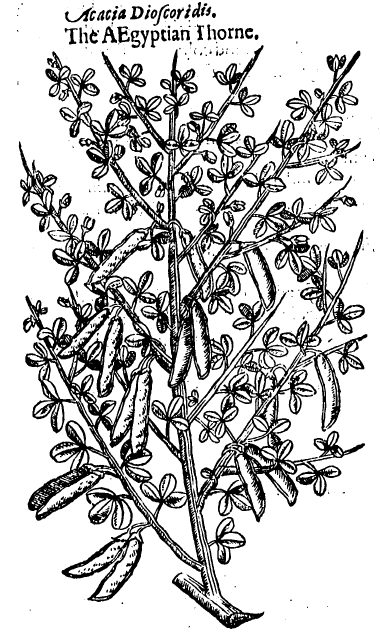 “Gerard and Lafranco note that the gum of Arabia or “Gum Arabicke” drops or flows from the tree itself. The most common method of harvesting Gum Arabic, however, is by wounding one of the tree’s branches, which causes the sap to seep from the tree, hardening into nuggets as the sap dries” Both the Acacia and Myhrr are known as weeping trees from Arabia, and both have been cited by historians as possible plants Shakespeare had in mind when he had Othello reference the weeping tree in his suicide speech. This article is a great (and well cited; not affiliated with me) resource on learning more about Arabian trees.

Plays in the mediterranean uses Mediterranean plants (Othello) Shakespeare doesn’t make major mistakes in plants associated with the location where his story is set.

John Gerard is acknowledged as a primary source for Shakespeare, 1597, with cork and plants being brought over from other places and Gerard he tried to grow them in his garden. Gerard was planting and growing these exotic plants in England, near London, and Gerit believes it is entirely possible that Shakespeare could have seen them.

Whether he saw them in person, or did extensive reading on the subject, William Shakespeare’s plays and their site-specific plants which pay attention to the play’s setting when referencing the garden varieties that might appear, attest to the bard’s education in plant and animal husbandry. He was obviously interested in, and including knowledge about, the plants growing in both in England and around the world.

I jest to Oberon and make him smile
When I a fat and bean-fed horse beguile,
Neighing in likeness of a filly foal 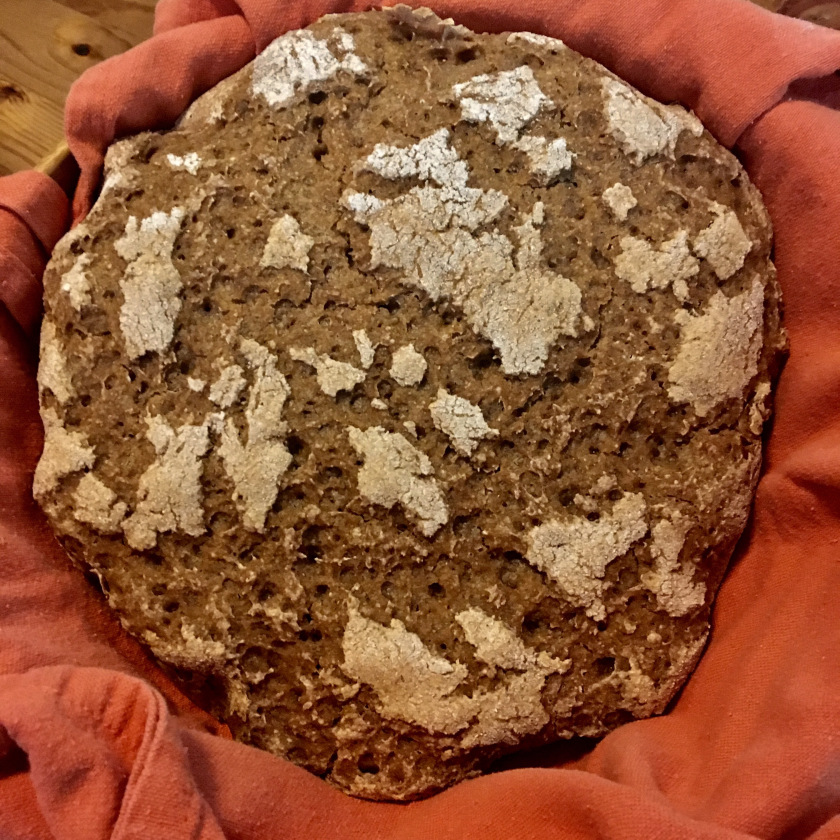 Medieval blogger, Eulalia Piebaker created this loaf of horsebread as a project. Read her adventure here. This is her image.

Peas and Beans as Horse Feed

In addition to hay and grain, horses in medieval England would have been fed horsebread. It was a loaf of bread, designed for horses, but there are some records of people eating it as well. The bread was made from peas and beans, and was used to supplement the daily diet of horses.

John Gerard, one of Shakespeare’s sources for plants used in his plays, wrote extensively about varieties of beans.

“It appears that for most of the history of peas, the pods ripened on the plant. Peas were dried and stored for food in winter. According to the Horticulture Department of Texas A and M, green peas, used as a vegetable, are not mentioned until after the Norman Conquest in 1066. In Old English they were called pise, probably related to the French, pois.” Source

Several playwrights contemporary to Shakespeare include references in their works to feeding this peas and beans horsebread to faithful steeds.

“O, brave, Robin! shall I have Nan Spit, and to mine own use? On that condition I’ll feed thy devil with horse-bread as long as he lives, of free cost.”
(Christopher Marlowe Dr. Faustus, scene VIII)

It is in us to plant thine honour where
We please to have it grow. 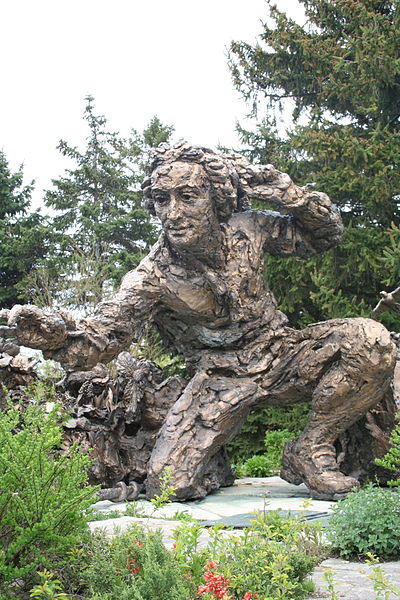 This figure of Swedish physician Linnaeus (1701-1778) looms large in the history of science and is appropriately placed in the Heritage Garden. Linnaeus established binomial nomenclature, the international system of naming plants and animals that is still in use today. He is shown reaching eagerly toward the plants in his path with a collector’s enthusiasm. The prominent bird in the sculpture — a golden plover, which can fly for thousands of miles — refers to the many students of Linnaeus who traveled the globe collecting plants for him to name.  Chicago Botanic Garden. May 2008 SOURCE

Naming of Plants for Shakespeare

The binomial nomenclature for plants and animals that we think of as standard scientific naming system, you know–the one where we as people are known as homo sapiens (two names there, see? that’s the “bi-nomial” part). It would be close to a hundred years after Shakespeare died when Carl Linnaus would establish himself as the father of botany for, among many other accomplishments, creating the binomial nomenclature for plants and animals.

For Gerit’s work into how William Shakespeare understood plants, the historical references to different varieties and species were not always clearly delineated.

must have saffron to colour the warden
pies; mace; dates?—none, that’s out of my note;
nutmegs, seven; a race or two of ginger, but that I
may beg; four pound of prunes, and as many of
raisins o’ the sun. 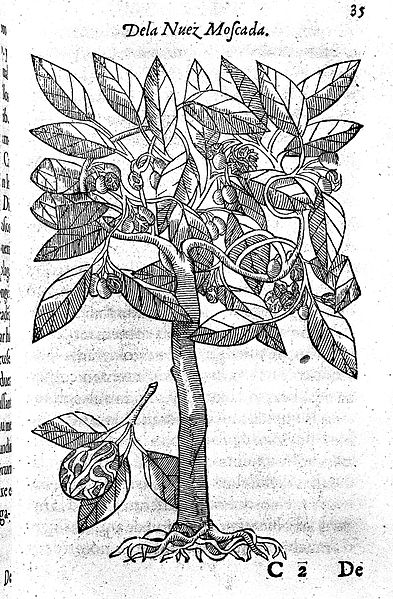 While cinnamon is never mentioned in Shakespeare’s plays, nutmeg was a popular staple in Elizabethan and Tudor cooking. Mentioned specifically three times across Shakespeare’s plays, this spice was a new import to England during the bard’s lifetime and appears to have made quite a splash. Considered highly valuable, the plant was an import from the East India trades, and there were even wars and massacres which were fought to try and monopolize the trade of nutmeg in England. Not only good for flavor, the spice was considered medically useful for its’ ability to warm you and make a person feel happy. Still today, nutmeg is recognized for it’s layering of flavor and scientists even recognize the plant’s benefits. NPR recently did an episode on nutmeg’s elaborate history, including a trip into the 17th century. Explore that resource here. 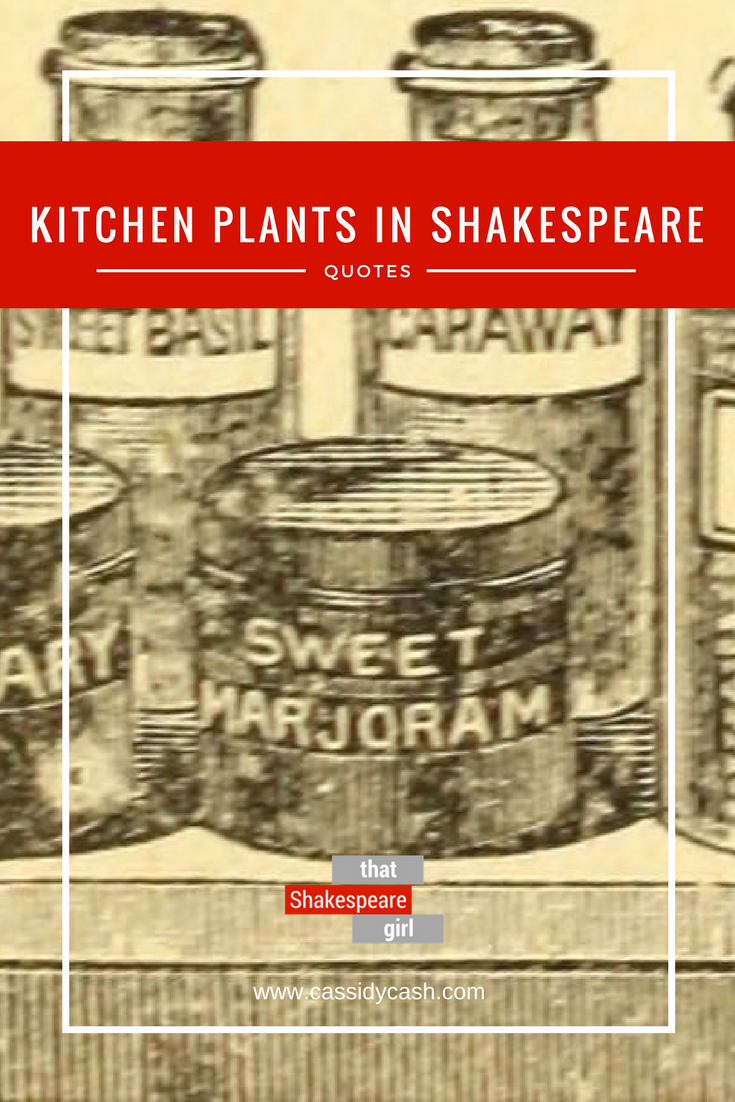 Grab a copy of this guide featuring 43 Plants from Shakespeare’s Plays that would have been used in Kitchen Gardens when you join the email list.