Episode 64: Before Farm to Table with Elisa Tersigni 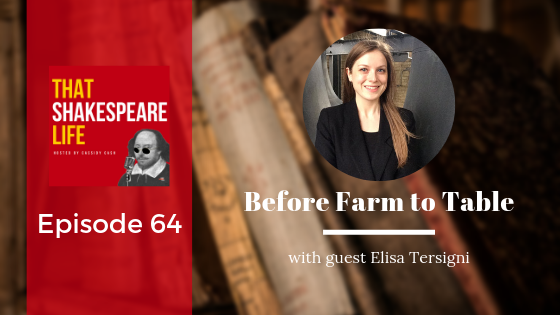 Welcome to Episode #64 of That Shakespeare Life, the podcast that takes you behind the curtain and into the life of William Shakespeare.

400 years is quite a long time for food to evolve, and for William Shakespeare, there were not only different foods being grown in Stratford Upon Avon as well as available in London than what are considered normal today, but the bard’s relationship to these foods was substantially different as well. There were superstitions surrounding food, religious opinions associated with various recipes and even cooking methods, and all of these reputations are attached to the metaphors Shakespeare intended when he used food references in his works.

All of this effusive history behind food in early modern England and what that means for Shakespeare is at the heart of the Folger Shakespeare Library’s latest project called Before Farm to Table. Their project takes over 100 early modern manuscript copies of 16th century recipes and explores them to learn more about the relationship to food that existed during Shakespeare’s lifetime, and what we can tell from that about how to interpret the references to food, eating, and recipes in the literature and plays which survive from the time period.

Our guest this week is part of the Before Farm to Table project at the Folger, Elisa Tersigni is the Digital Research Fellow for “Before ‘Farm to Table': Early Modern Foodways and Cultures.” project and she joins us today to tell us about what’s going on at The Folger with this new project, and how we can better understand Shakespeare as a result of what they discovered in their research.

Elisa Tersigni is the Digital Research Fellow for the Mellon-funded initiative in collaborative research, Before ‘Farm to Table’: Early Modern Foodways and Cultures, at the Folger Shakespeare Library.

In this episode, I’ll be asking Elisa about :

No, Antony, take the lot: but, first
Or last, your fine Egyptian cookery
Shall have the fame. I have heard that Julius Caesar
Grew fat with feasting there.
Pompey 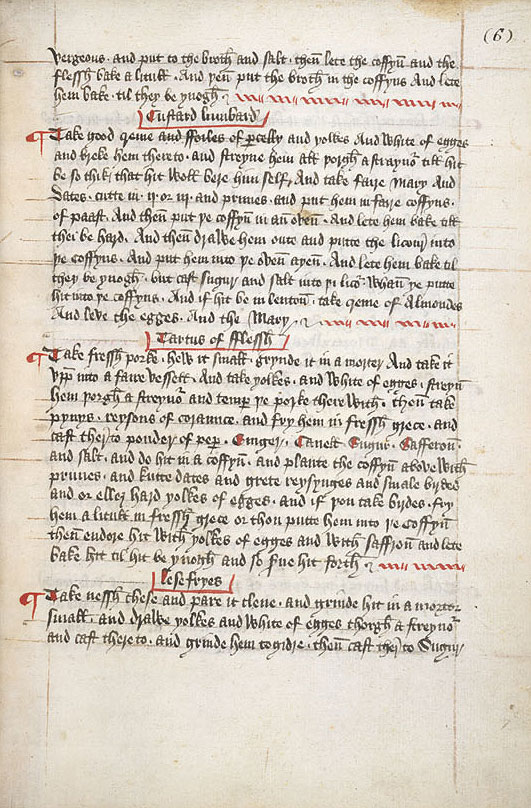 A recipe for Custarde taken from the Boke of Kokery, c. 1440.

Richard Pynson was one of the first printers of English books. His books were influential in establishing the standard form of the entire English language. Pynson became King's Printer to Henry VII, and subsequently to Henry VIII (Elizabeth I's father) in 1506. This job was a prestigious appointment with a substantial annual salary and a lifetime appointment. After achieving the status of the King's Printer, Pynson, an immigrant, would go on to be made a naturalized citisen in 1513.

While Pynson has a rich printing legacy, one of his most important works associated with the history of food in England is his “Boke of Kokery” that was the first printed the first vernacular cookery in 1500, based on recipes originally circulated in manuscript form. “Cookery” means “Cookbook” to those of us in the United States.

Despite being a printed book, the Book of Cookery is very similar to typical medieval cookeries. The size of the book and appearance of the text mirrors many fifteenth-century manuscript cookeries. The black gothic typeface is unadorned, nary a decorated capital or border in sight. Clearly differentiating the printed text from a manuscript one is the lack of rubrication, which speckles so many handwritten recipes. Source

The book contained 275 recipes, and many were 150 years old by the time they were printed. This book appeared 25 years after the printing press in England. Mostly families would use their own family recipes, or local recipes, when deciding what to cook or how to prepare meals, before the distribution of the cookbook

Exploration also brought new cooking techniques and recipes to Europe so some recipe books and encyclopedias of plants would function as instruction manuals.

But his neat cookery! he cut our roots
In characters, / And sauced our broths,
as Juno had been sick / And he her dieter.
Guiderius 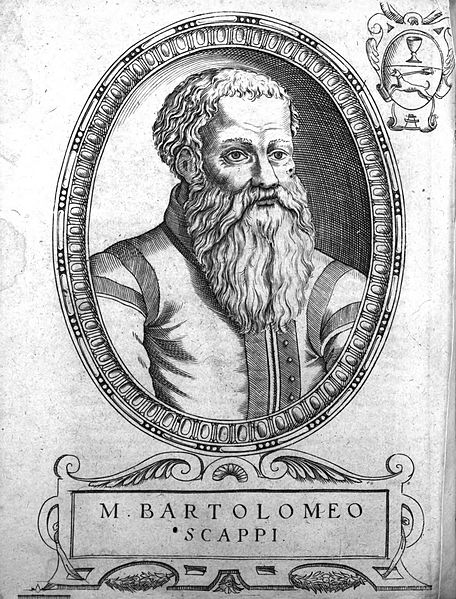 How to Arrange a Kitchen

Bartolomeo Scappi was a famous Italian Renaissance Chef. In April 1536 he organized a banquet for Italian Cardinal and politician, Lorenzo Campeggio. He served several other cardinals after Campeggio, before coming to work for Pope Pius IV in the service of the Vatican kitchen. He would continue at the Vatican under Pius V, before Scappi's death in 1577.

While is widely considered the first ever celebrity chef, he is most famous for his book, written in 1570, called Opera dell'arte del cucinare. This cookbook contained close to 1,000 Renaissance recipes, guides for cooking techniques, diagrams of the proper tools, and the first diagram of the correct way to arrange a commercial kitchen. Scappi's book also contained the first ever picture of a fork.

Scappi thought that parmesan was the best cheese in the world, and he wrote that“the liver of [a] domestic goose raised by the Jews is of extreme size and weighs [between] two and three pounds”–which is a reference to the practice of overfeeding geese to create fois gras. His cookbook would be reprinted again and again for close to a century after his death. 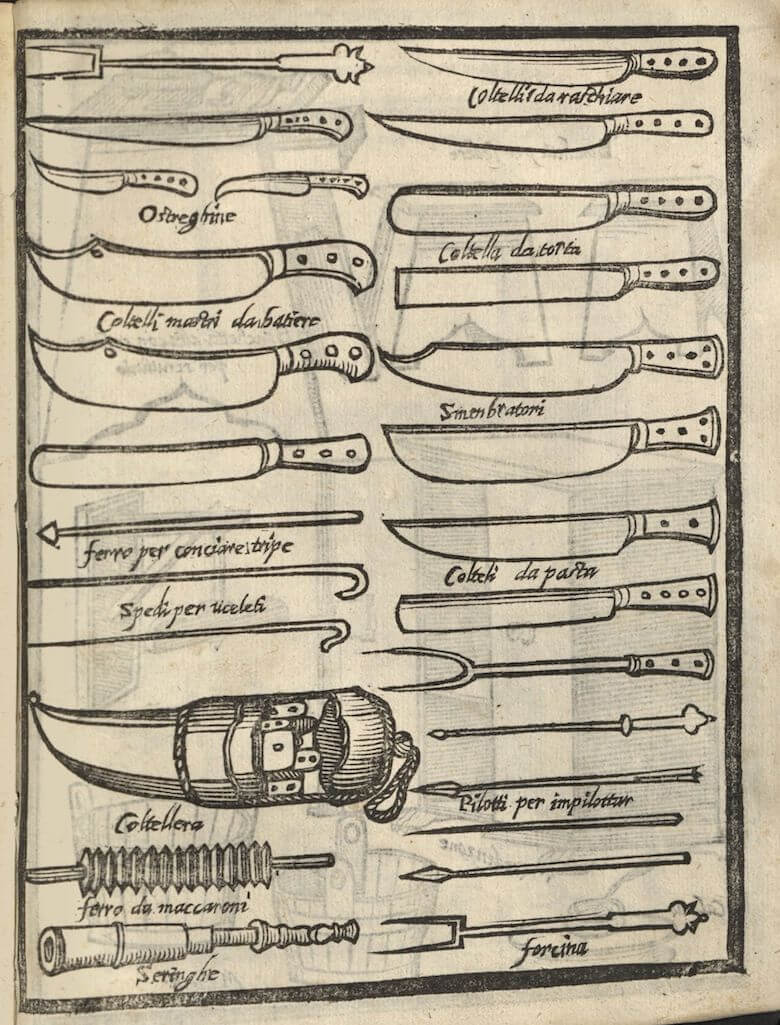 The first illustration of a fork, from Opera dell’arte del cucinare by Bartolomeo Scappi (1596). Image courtesy of the New York Academy of Medicine. Source 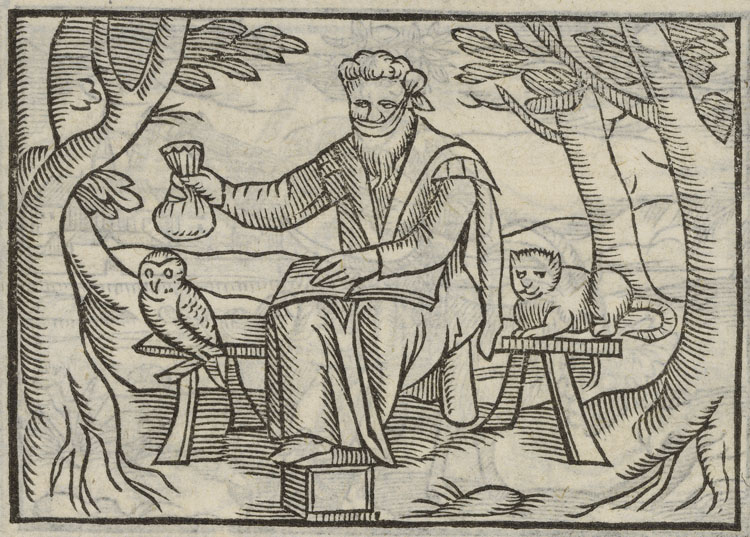 Most recipes in Shakespeare's lifetime were written narratively, like you might expect from a recipe. It was instructions on how to cook something, so it was usually highly functional descrioption of what to do, and in what order, to achieve the desired result. One particular recipe for pudding, however, surprised the team at Before Farm to Table, because it was written as a poem. As such, it became known as Poetical Pudding.

From one of the manuscript recipe books and titled VA680 (this is a group of librarians, after all), they are not certain as to whom the author of the poem might be, but the recipes included in the rest of the book and the handwriting lead historians to believe the poem was written in the 16th century.

Interestingly, there is a solid connection between food and poetry, as well as the idea of culinary arts. Some of these connections come in handy to understand as you encounter food references in Shakespeare's plays, because the 16th century associations for various food items have changed somewhat between Shakespeare's time and today.

Most poems were written as descriptive narratives. Food features metaphorically. So food was a convenient feature of poetry. Writers in Shakespeare's time period, and indeed their audiences, operated under the gallinic theory of humors, which not only assigned four humors to the various body fluids, but in order to have good health, you needed good balance, and that was balance was informed by your food intake. In many cases, food was even prescribed medicinally. Milk, for example, is not just about birth/motherhood/nurture but also cooling/wetting properties that were thought to be useful in dampening a hot humor.

Come, thou shalt go home, and
we'll have flesh for holidays, fish for
fasting-days, and moreo'er puddings and flap-jacks,
and thou shalt be welcome. 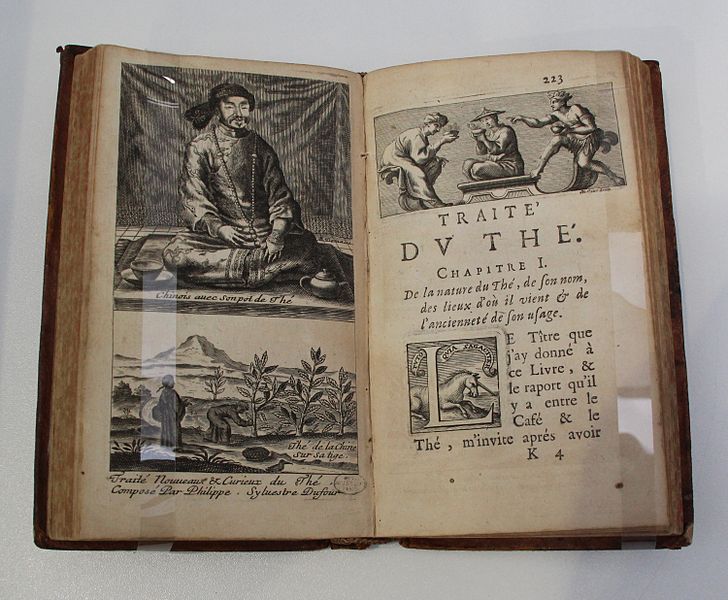 Philippe-Sylvestre Dufour (1622 – 1687) New and curious treaty on coffee, tea and chocolate: Book useful to physicians & all those who love their health – Lyon, Jean Girin and B. Rivière, 1685 – From Miche-Eugène Chevreul – MNHN Library Ch 2049 at the Antiquarian book and print fair in 2013 at the Grand Palais in Paris, France. Source

Shakespeare would not have had tea

Despite both sharing the status as icons of what it means to be English, Shakespeare would not have drank tea regularly. While exploration was high during his lifetime, and it is possible one of the merchant ships sailing to locations like the East Indies, might have returned with tea leaves as spoils of the trip for her Majesty the Queen, it is unlikely that William Shakespeare would have tried any personally. Tea would not have been sold in England until well after his lifetime, in the late 1660s under Charles I.

The herb, and it's use as a beverage in England, does overlap with Shakespeare's lifetime, however, The earliest mention of tea in European literature was by Giambattista Ramusio, a Venetian explorer, who described tea as Chai Catai or “Tea of China” in 1559. Jan Hugo van Linschooten, a Dutch navigator, was the first to write a printed reference of tea in 1598 in his Discours of Voyages.

In 1615, that the earliest known reference to tea by an Englishman showed up in a letter between Mr. R. Wickham, who was working with the British East India Company to a Mr. Eaton, who was stationed in Macao, China. Wickham requested that Eaton send him “a pot of the best sort of chaw,” which was a phonetical spelling of “chah” the local Cantonese word for tea.

Samuel Purchas describes how the Chinese consume tea as “the powder of a certaine herbe called chia of which they put as much as a walnut shell may contain, into a dish of Porcelane, and drink it with hot water.” (1625) In 1637, Peter Mundy, a traveller and merchant who came across tea in Fujian, China, wrote, “chaa – only water with a kind of herb boyled in it”. (Source)

Cooking in the Archives: https://rarecooking.com/

Books where you can learn more: