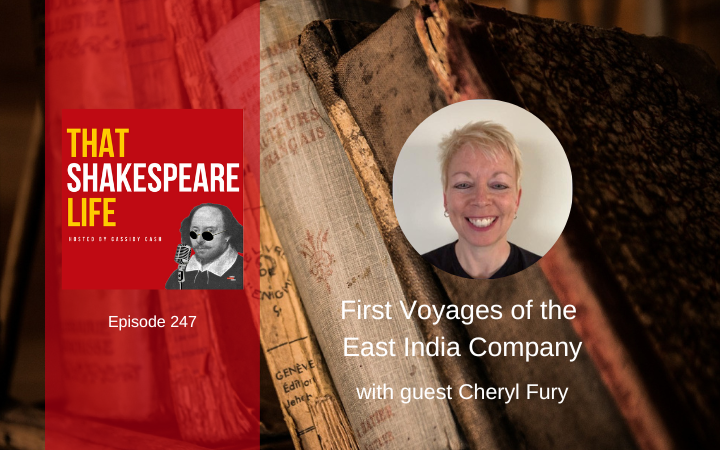 Just like Shakespeare’s work, our show is supported by patrons. Become a patron to access our entire back catalog of 100+ episodes.

Welcome to Episode 247 of That Shakespeare Life.

In April of 1601, four ships set out from England with hopes of establishing trade with Asia. Remembered by history as the first voyage of the East India Company that launched a momentous relationship between what would become Britain and Asia, the first, as well as the subsequent three, voyages by this group were wrought with danger, disease, and completed at great personal sacrifice. On all of these journeys, the captains and sailors battled illness, poor living conditions, and perilously low morale. While the East India Company launched the missions with a set of rules designed to help alleviate the most significant hurdles, our guest this week, Cheryl Fury, shares in her recent publication that the human cost of these voyages remained astronomically high.

Cheryl Fury is a Professor of History at the University of New Brunswick (Saint John) and a fellow of the Royal Historical Society and the Gregg Centre for War and Society. She teaches courses in European and British history (Tudor-Stuart England, early modern women, queenship, as well as modern Europe, especially the Holocaust and Fascism). She has spent her career studying the English maritime community. She has written and edited a number of books on the social history of English seafarers: Tides in the Affairs of Men (2002), The Social History of English Seamen 1485-1649 (2012) and The Social History of English Seamen 1650-1815 as well as several articles in academic journals and chapters in books. She is currently working on a book on diet, disease and disorder in the early East India Company.  She has also edited a number of books with Holocaust survivor, Vera Schiff.

I’ll be asking Cheryl Fury about:

Records from the period—some of them are printed The Hakylutt Society. Their mission is to make the accounts more accessible to anyone.

Love the history you’re hearing? There’s more inside the vault!

Sign up to be a patron of That Shakespeare Life for just $5/month and immediately unlock over 100 episodes from our back catalog along with other great patrons-only bonuses.

Explore the history of the Red Dragon ship (part of the East India Company) and their potential performance of Hamlet in the 1600s.