Fishing for Sport in Shakespeare’s England 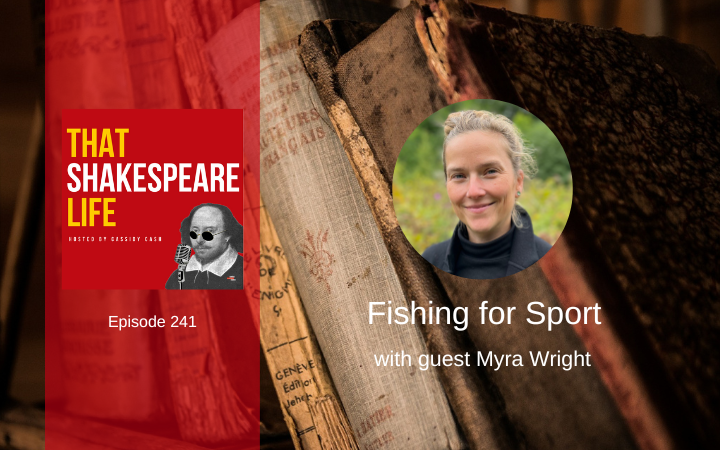 That Shakespeare Life is made available free to listen and without any commercials thanks to the support of listeners who sign up to be our patrons. Become a patron today: patreon.com/thatshakespearelife

William Shakespeare mentions fish over 70 times in his plays including certain kinds of fish like dwarfish, a finless fish, and even a dogfish. Types of fish, being a fishmonger, and applying all manner fish metaphors were a consistent theme in many of Shakespeare’s works, which lead me to wonder about the role of fishing and fish in Shakespeare’s lifetime for not only the individual who might have gone fishing for their food, but the role of commercial fishing in the economy of England during the 16-17th century. Here today to help us explore what kinds of fish were most popular, the representations of angling/fishing in print, and exactly how and where people would have caught fish for Shakespeare’s lifetime, is our guest and author of The Poetics of Angling in Early Modern England, Myra Wright.

Myra E. Wright studies representations of nonhuman life in medieval and early modern texts. She is the author of The Poetics of Angling in Early Modern England (Routledge, 2018). Her current book project, The Swimming Kind, considers figures of aquatic human bodies in literature before Shakespeare. Myra was born and raised on the west coast of Vancouver Island.

I’ll be asking Myra Wright about:

Notes and commentary provided by Myra just for you! 🙂

This is a 19th-century edition of the first known fishing poem in English: John Dennys’s Secrets of Angling: https://www.biodiversitylibrary.org/item/64110#page/9/mode/1up (Biodiversity Heritage Library). It’s sad that listeners won’t be able to see the frontispiece of the original, so here’s a link to the image provided by Wikipedia (from a copy at the Bodleian library): https://en.wikipedia.org/wiki/The_Secrets_of_Angling#/media/File:SecretsAnglingCrop.jpg. So fun to study!

If folks want to look at some wonderful early ichthyological images (from an early modern natural history text), they can go to the Bibliothèque nationale de France and look at Guillaume Rondelet’s Histoire entière des poissons: https://gallica.bnf.fr/ark:/12148/bpt6k1512044f.image. This text was published just a little before Shakespeare’s birth, and it introduces many species of fish that would have been known to English people in this period.

“Twas merry when you wager’d on your angling; when your diver Did hang a salt-fish on his hook, which he with fervency drew up.”

Fishing was a valuable resource

Fish were a popular food, with there even being “fish days” assigned to society where they were expected to eat fish. During Shakespeare’s lifetime is when we see fishing become popular as a sport and leisure activity.

“The pleasant’st angling is to see the fish Cut with her golden oars the silver stream, And greedily devour the treacherous bait…”

The first woman author in the English language is also one of the first to write about fishing as a sport. Juliana Berners (also Barnes) was a nun of the Benedictine Sopwell Nunnery in England. She wrote a book on fishing titled “Treatyse of Fysshynge wyth an Angle“; in this book she details the technical methods of fishing, tools, instruments, and strategies for successful angling. nuns.

There’s a lot of bro-y fishing from the fishing looks like it is more male enclaves of gentlemenly sorts for men to practice and it appears to be exclusive of women, but that’s not entirely accurate. Other representations of the sort, like Lady Mary Roths’ romance the Urania, we see female anglers in relativeabundance in that text and in Shakespeare’s own writing, we have the image of Cleopatra angling in thecompany of Antony or even alone without him when she’s frustrated at not hearing from him andgetting bad news, she’s thinking about going fishing.

Later in the 16th century, when Izaak Walton was writing his famous book The Compleat Angler, he would draw upon Juliana Berners’ work as it was published in the second collection of the Book of St. Albans (1496), as well as works by William Gryndall (1596) and Leonard Mascall (1590), who also wrote manuals on fishing that very closely matches Berners work

“I am angling now, though you perceive me not how I give line…”

Fishing with Tridents and Nets

in the 16-17th century, fishing was done with a variety of implements. The most common was also the oldest, and that’s fishing with a line and hook. From portraits like the one above, however, we can see that tridents (also known as spears) as well as nets were useful for catching fish.

“The type of fishing that would have taken place with the use of spears would have involved the larger top-feeding fish and mammals. The larger and more robust spear would have been used to hunt for whale, porpoise, seal and sturgeon whereas the finer spear would have been used for fish such as salmon, mullet, eel, etc.Eels were a favoured fish of the period and these were caught by spear too. During the winter months the eel buries itself into the mud together with other eels. By using a spear one can poke around into the muddy bottoms of river or estuary until an ‘eel nest’ is located; many eels can be caught in this manner.”

From “Fishing in Early Medieval Times” by © Regia Anglorum Publications 2002.

As Myra explains this week,

The text of Secrets of Angling, which is wonderful, but also take a peak at the frontspiece of that poem which is a great depiction of two possibly rival fishers on opposite sides of a stream holding a rod and the other is holding a circular trap or cage and we hear about implements of that kind being used in freshwater ways and streams or possibly ponds. Tools that are best described as traps, and of course, the rod is what makes it angling with the rod and line and hook. Those kinds of tools are used. The descriptions in early modern angling manuals are very elaborate about how to get them, how to make them, and fish hooks, for example, are not necessarily being manufactured for people to buy, you would make your own. But spears and clubs would be expedient tools and they are mentioned in some places.