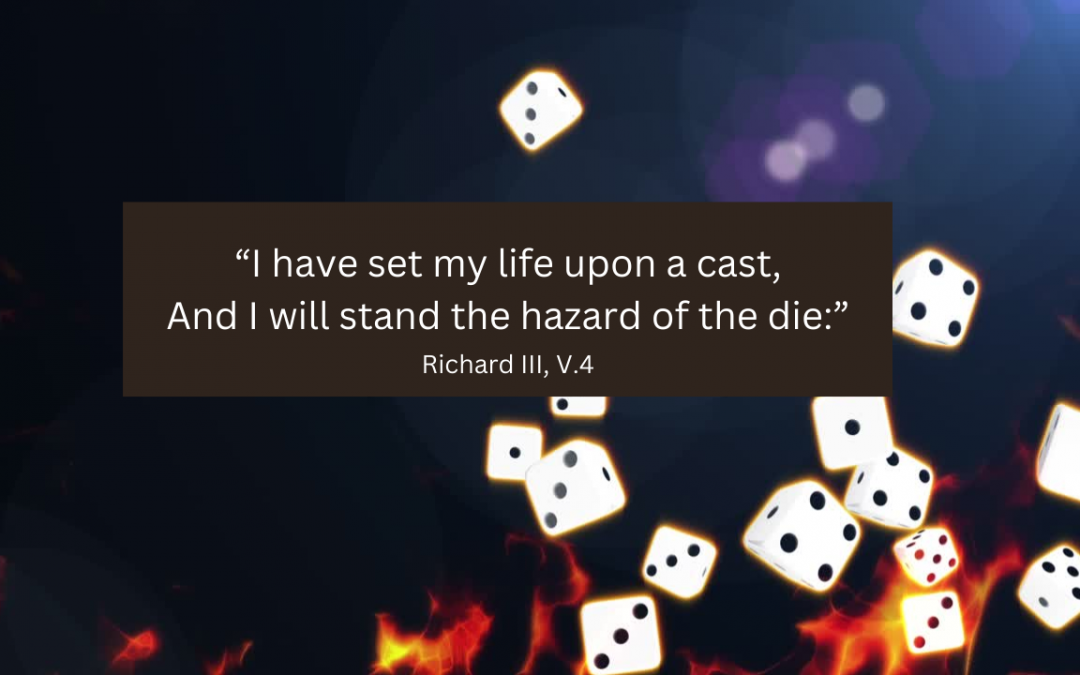 That Shakespeare Life and DIY History are supported by patrons who join our community on Patreon. This website contains affiliate links.

Hazard is a game played with two dice. It is very similar to craps, which is popular here in the US and other parts of North America.

In Shakespeare’s Richard III, the title character includes a reference to the game of Hazard in his famous “My kingdom for a horse” speech in Act V, scene 4. Richard declares:

“I have set my life upon a cast,

And I will stand the hazard of the die:”

Hazard here is a reference to an early English dice game that was played with two die.

The second senator in Timon of Athens also mentions this dice game in Act V, Scene 4, when he says “

“And by the hazard of the spotted die

There are a total of 44 uses of the word “hazard” in Shakespeare’s plays, with all but these two using the word to mean “risk a loss” or “taking a gamble” which all of those meanings can be associated with this dice game as well, since the game is entirely a game of chance.

If you’re into linguistics, you’ll find it interesting to note that the term “hazard” has been, by some scholars, attributed to French and arabic origins coming from words in those languages that means to play at dice.

Regardless of how we arrived at the term itself, the game was popular in Shakespeare’s lifetime and here’s how you play it.

The basic premise of the game is that you guess ahead of time what number you think you will throw then you throw the dice and if it comes up that number, you win.

In the game of Hazard, any number of people can play but only one person throws the dice at a time. The Non-dice players are winning based on their bets about whether the dice thrower will get the number he threw or not. The thrower is winning based on how successful he is at throwing what’s called his “main” or the number he picks between 5 and 9 that is the number he hopes to throw.
I used several sources to investigate how to play this game and some versions say the thrower can simply choose a number between 5 and 9. Other versions suggest the caster has to throw the dice over and over again until they throw a number between 5 and 9, and this number becomes the main for this round at being the caster, or dice thrower. You can choose which version you would like to use when you play.

But there are also other ways to win.

You will if you throw the number of your main–so if your main is a 5 and you throw a 5, you win. Same with the other numbers, too.

So 5 and 9 only win with their numbers, but 6-8 have companion throws that will win for you as well.

Now you can also lose on your throw, this is a gambling game after all.

Now you may have noticed that with all the wins and losses available to you, it doesn’t use up all the possible dice combinations. You could throw a 4, for example. So what do you do with those? Any other throw besides the clear wins and losses is called a chance; When you throw a chance, you are on the cusp of losing but you have one more throw to determine the game. If you can throw the dice and turn up that number again, you win. If you turn up your main you lose. If you turn up any other number, you get to keep taking chances until you throw either the chance number you got at first or the main, for a clear win or loss. Once the caster has either won or lost, The dice are then passed to the next player.

In some versions of the game, if the caster loses instead of winning, the caster is allowed to keep playing until they have either won, or lost 3 times in a row. At that point, then the play moves to the next person.

Again here, you can choose which option you prefer.

That’s it for this week! That’s how you play the dice game of Hazard that is mentioned in Shakespeare’s plays.

If you would like a complete printable of the game instructions, the ways you can win, and a table that outlines how to pay out on bets put on the game (including some of my own tips about how you can play this game with kids or in a classroom where you might not want to bet real money), that entire game guide is available for Patrons of That Shakespeare Life. You can access that by joining at the Digital Downloads level or higher at patreon.com/thatshakespearelife
Thank you for playing with me! I’ll see you next time. Goodbye!