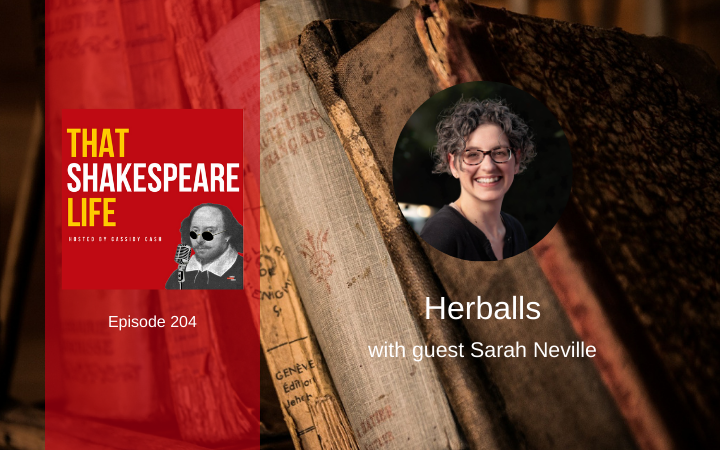 This post, and all the posts on our website, contain affiliate links. We make a small commission on sales from affiliate links but the purchase price to you remains the same. We appreciate your purchases from our affiliate links but you can also search the items we reference here online to buy separately. Additionally, if you want to support our work more directly, consider becoming a patron

Welcome to Episode 204 of That Shakespeare Life, the podcast that takes you behind the curtain and into the real life and history of William Shakespeare

Sarah Neville is an assistant professor of English at the Ohio State University with a courtesy appointment in Theatre, Film, and Media Arts. She is an assistant editor of the New Oxford Shakespeare (2016-17), for which she edited five plays in both old and modern-spelling editions, as well as an associate coordinating editor of the Digital Renaissance Editions. A great believer in experiential learning, Neville is also the founder and creative director of Lord Denney’s Players, an academic theatre company that enables audiences to see how technologies of textual transmission have shaped the reception of Shakespeare’s plays. Her latest book, Early Modern Herbals and the Book Trade: English Stationers and the Commodification of English Botany (Cambridge, 2022), demonstrates the ways that printers and booksellers of herbals enabled the construction of scientific and medical authority in early modern England.

I’ll be asking Sarah Neville about:

(Notes below for each record are written by Sarah Neville just for you!):

My own scholarship is particularly indebted to the work of two pioneering female bibliographers.

Shall I not lie in publishing a truth?

Books Written for the Publisher, but not the Author

In Shakespeare’s lifetime, printed books were for the profit of the publisher, not the author who wrote the book. The industry existed for the benefit of the publisher. Unlike today when we ask “Who wrote that book?” when someone in Shakespeare’s lifetime wanted to give credit to anyone for a good book, they’d likely say “Who published that book?”

As an example, Sarah points out that one of the most popular books in Shakespeare’s lifetime is anonymous.

One of the most popular books that anybody sold or read in English was a tiny little herbal who had no author at all. 20 editions in about 40 years, one of the best sellers in the book trade….

The success of this book and one other small herball, led people to want to buy more herballs. Of course, if there was a demand, then booksellers were seeking a way to fill the supply.

The books came from the publishers and book sellers, not so much about the author. Quite frequently the people at the bottom–the publishers to the stationers created herballs as a way to have a book they could sell prolifically. They setup the terms by which an herball could be produced, they got the blocks to make the woodcuts, even sometimes renting the woodblocks from a continental bookpublisher and by finding someone who could produce a text to serve that need in the market, the publisher is the prime mover of the renaissance herballs, not the figure we associate with them as the author.

Illustrations stand out inside herballs that survive today as a key element of the publication. Created on commission, these illustrations did not feature in all editions of early modern herballs. Some popular herball editions went to print without any illustrations at all.

The book producer would have access to a group of woodcuts. Book seller would know before they would commission a book whether they’d have access to those woodcuts so they would regularly make that determination early on and reprints Example:  “The Grete Herball” didn’t have illustrations in the 3rd or 4th edition because it was not profitable to include illustrations.

In other cases, sometimes an author themselves can arrange for funding to have some woodblocks cut. Less common in England, Leonard Fuchs produced in the 16th century one of the most famous books of the german renaissance 30 editions in Fuchs lifetime, Professor of Natural History at the University of Tubingen and as part of his salary he had money to produce books. [Gerard partnered] with a publisher who helped to commission woodblock cuttings drawn from life and he supervised all of that and images of the artist–the person who drew the images of plants and transferred those drawings onto the woodblocks and the person who cut the woodblocks is featured in Fuchs’ edition of his herball with author credits.

Very soon after that those illustrations were copied by someone who wanted to have plant illustrations in their own herball. This created a little bit of a stir because those commodities could be rented and reused.

When our sea-walled garden, the whole land,
Is full of weeds, her fairest flowers choked up,
Her fruit-trees all upturned, her hedges ruin’d,
Her knots disorder’d and her wholesome herbs
Swarming with caterpillars?

One of the most famous herbalists of his time (and indeed the one you are most like to hear mentioned in context of Herballs still today) is John Gerard. Published in 1597, the herball functioned as a reliable gardening manual for many in England for centuries.

Sarah explains that Gerard received plants and herbs brought back from the Colonies that he then included in his book.

[Gerard] was friends with Sir Walter Raleigh who would bring plant samples home from his voyages and [Gerard] was heavily associated with the court of ELizabeth I as the Chief Gardner of Lord Burleigh and one of the things this meant is that as particular plants were brought back from the New World Explorations they were given to Gerard to try and support and nurture them through Gerard’s own gardens as well as Lord Burleigh’s gardens in Holborne, a region of London. Gerard was a figure on the rise. [An expert gardener] with some renown in London, and arguably the most famous gardener in London so when publisher John Norton wanted an English herball–recognizing there had not been an english herball done by an Englishman for 25 years, he offered the opportunity to Gerard. The thing we know as Gerard’s Herball, massive tome of 1400 images and 2000 woodcuts from 1597 is an extravagantly expensive publishing enterprise, almost in the same way as a massive film undertaking.

Why, your herb-woman; she that sets seeds and roots of shame and iniquity.

Shakespeare’s works identify husbandry of plants as important to prevent herbs from dying and later uses the phrase “herb-woman” for someone that grows particular herbs. While it was primarily men who authored herballs, knowledge of plants and their uses was common among women. Herb-women mixed up medicinal remedies from plants and herbs.

Medical authorities are recognizing that their skills at healing is dependent on the accuracy of plant knowledge all the way down to the herb-woman. That herb-woman has a lot of authority and that concerns medical practitioners at higher levels of status. One of the ways they could fix this problem is by writing books that dictated what plants had particular equivalencies. When we see references to herb-woman or wise-woman demonstrates an awareness of medical care not necessarily reside with the established medical authorities. There were other ways to gain access to medicine and one of her chapters talks about how the stage operates to show some of these debates about authorities.

Research Links from this week’s episode: