Infant Formula in the 16th Century 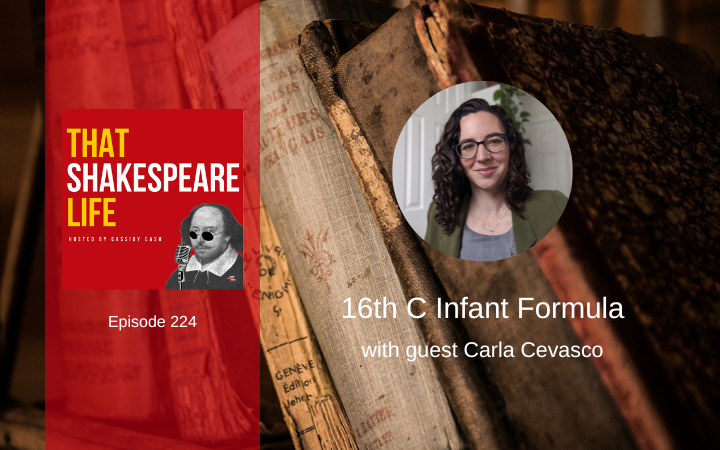 \Welcome to Episode 224 of That Shakespeare Life, the podcast that goes behind the curtain and into the real life and history of William Shakespeare.

Commercial baby formula wouldn’t hit the mass market until the 1800s, but Shakespeare’s lifetime still had to deal with babies who needed to eat but were unable, for a variety of reasons, to nurse and drink breastmilk. Here this week to help us take a look at baby formula, baby bottles, and the role of wet nurses in Shakespeare’s lifetime is our guest and author of multiple articles on the history of baby formula, Carla Cevasco.

Carla Cevasco is a scholar interested in food, the body, material culture, gender, and race in early America. She is Assistant Professor of American Studies at Rutgers University-New Brunswick. Her first book, Violent Appetites: Hunger in the Early Northeast (Yale University Press, 2022), explores how Indigenous peoples and colonial invaders confronted hunger in the seventeenth and eighteenth centuries. She is working on a second book about feeding infants and children in early America. She received a Ph.D. in American Studies and an A.M. in American History from Harvard University, and a B.A. in English and American Literatures from Middlebury College. Her scholarship has appeared in Early American Studies, New England Quarterly, and Journal of Early American History. Her public writing has been featured in The Atlantic, TIME, Nursing Clio, Common-Place, The Junto, and The Recipes Project. She is a former editor of the Graduate Journal of Food Studies. https://carlacevasco.com/

I’ll be asking Carla Cevasco about:

Like the need to get babies to drink something other than breastmilk far pre-dates the arrival of commercial infant formula, so to does the need to deliver this food to the baby in a way that was baby-friendly. In Shakespeare’s lifetime the preferred methods of getting a baby (or a sick/elderly person) to eat the infant formula was to use things like a Pap boat.

Pap boats–broad shallow dishes, spout at one end for pouring the liquid into the mouth. The vessels are flat, which allows to cool it off before the baby eats it. This evolves into mass produced bottles by the 18th century and by the 18th century you have bubby pots, looks like tea pots with a nipple at the end, and for people who couldn’t afford ceramic or metal feeding utensils, you’d see things like cow horns used.

When I had my babies, we were sent home from the hospital with an electric breast pump. This apparatus was used to extract breastmilk in the event that I was unable to feed the baby, but also to help with overproduction of milk in the event that I produced more milk than my baby could eat. That stuff has to go somewhere, so a breast pump helped. Until this episode, I had not considered that women in Shakespeare’s lifetime would have also used a breast pump, I suppose because I considered them to be like the light bulb and be something that , due to electricity, was only possible today. Well, I was wrong. In researching this episode, I came across a book by a man named Omnibonus Ferrarious that was written in 1577. In that book, he includes an image of an early modern breast pump.

I was unable (in time for publishing this article) the original source for this image, but I was able to find a Prezi presentation by Sarah Bier and Megan Dawson-Zmora (whose credentials were not included so I cannot credit them here) to the image from Omnibonus Ferrarious’ publication. Here’s the image:

For our episode this week, Carla explains that while there were breast pumps, there was not a known way to store/preserve the breastmilk. Mothers needed to remove the unneeded breastmilk, but it was for the safety of the mother not to store for a baby to eat later. In order to remove the breastmilk, a breast pump was one method (and believe or not, a suckling puppy was another) to remove breastmilk from a mother when she had too much or was unable to breastfeed. The goal was to prevent milk fever, which is much more serious in Shakespeare’s lifetime than today in the absence of medical treatment like antibiotics.

There’s no way to store them but the pumps were being used to express their milk for other reasons besides storing their milk….Early modern England was afraid to give babies colostrum because it looks so different than the milk that comes after, and the colostrum that comes first looks black or green or blue and they were worried it would be harmful to the newborn, and it is seen as a really good thing for babies today for it’s antibodies, but early modern period saw it as unsuitable for newborns, and people would have older children or puppies to suck that out…

I think it’s important to note here that it wasn’t merely cultural superstition that made people dislike the color of the colostrum and decide not to feed it to babies. Avoiding colostrum was the advised medical science in the 16th century.

When it came to what kind of food combinations constituted the right nutrition for babies in the early modern period, Carla explains that there were two main versions of infant formula:

Pap– animal milk, sometimes goats milk (easier to digest than cows milk) mix it with a starch (breadcrumbs) and a sugar

Panatta–same thing but with broth.

They are not necessarily nutritionally complete or even digestible by babies. Until about 6 months, babies can’t digest cow’s milk and this was an era far before food safety standards. If it’s not stored properly or boiled to a certain point, or if the utensils/vessels are not cleaned properly, or if they are made of things like pewter which contains lead, are all opportunities for bacterial infection and illness.

There is record that spoon fed babies die at an astronomically higher rate than breastmilk. Also summer is dangerous for babies because higher risk of bacterial infection and food borne illness.

Infant Formula and the use of a Wet Nurse

You may have already been expecting that we would talk about wet nurses in this article on feeding babies, and you would be right. Wet nurses were a common way for women to feed their babies in the event that they themselves were unable to breastfeed.

While many aristocrats would have servants, slaves, or the resources to hire a professional to be their wet nurse, middle and lower class individuals had wet nurses available as well, usually in the form of a community where it was expected that mothers with ample supply would step in and serve the families who were unable to breastfeed themselves. In 1577, Omnibonus Ferrarious wrote a Treatise on Children in which he stressed the importance of a woman nursing her own child and cautioned against using a wet nurse.

Carla explains that despite the regular and common presence of women who worked as wet nurses professionally (high infant mortality leading to a surplus of women with breastmilk but no babies), the concept of using a wet nurse for your child was covered in a cultural skepticism for the 16-17th century:

Wet nursing becomes controversial practice because it’s very personal and someone outside of the family is getting to perform this personal service. During this early colonial period is when opposition to wet nursing picks up. Early modern European theories about where race and racial difference comes from and there’s an environmental factor to race, by the food you eat or the climate you’re end, so for one thing as europeans colonize the world, they become anxious that being in these climates will convert them to the kind of indigenous people they are seeing there. They worry that someone imbibing the breastmilk of indigenous people would convert their race. Similarly they worry about babies absorbing the lower class attributes of their wet nurse as well. They seek qualities that are beneficial to their babies.

Infant Formula and the reasons it was needed

During the 16-17th century, babies regularly died in infancy. In some instances as far back as the Ancient World, there were even celebrations held when a baby stopped breastfeeding because they had finally grown old enough to be free of many of the dangers of young childhood. (Source) Additionally, medical care for women was woefully lacking in many of the pre and post natal care options we consider normal today. Not to mention, surgical techniques were in their infancy during this period so women were often perishing in childbirth, leaving an infant with no one to feed them.

Carla explains that for women in the early modern period, they, the high infant mortality rate as well as the high rate at which women died in childbirth directly contributed to the profession of wet nurses and the need for infant formula.

There’s a problem of maternal mortality. 1/20 women might have died in childbirth, so from the beginning some babies don’t have their moms. Other times, even with a mom, breastfeeding problems that we still struggle with today happened for Shakespeare’s lifetime. Mastitis, and nipple cracking, low supply The first two are highly dangerous in 16th century because there weren’t medications like antibiotics to treat these issues, which makes them life threatening. Trouble latching or cleft palette, or tongue tied, trouble getting babies to nurse.

Baby Formula is an Absolute Miracle by Don Williams

Midwifery from the Tudors to the 21st Century History, Politics and Safe Practice in England By Julia Allison · 2020

Bottled Up: How the Way We Feed Babies Has Come to Define Motherhood, and Why It Shouldn’t By Suzanne Barston

The Cambridge World History of Food, Volume 2 By Ed. Kiple

A History of INfant Feeding

A History of Infant Feeding

A Social History of Wet Nursing in America: From Breast to Bottle By Janet Golden

Sugar and Spice: Grocers and Groceries in Provincial England, 1650-1830 By Jon Stobart (This one is super cool, but as of the time of writing this article it is priced at $155 (yes you read that right!) On Amazon. That’s just ridiculous. Definitely get this one at the library. Worth reading, but I’m not at all suggesting you spend $155 on a book.

Seventeenth-Century English Recipe Books: Cooking, Physic and Chirurgery in the Works of W.M. and Queen Henrietta Maria, and of Mary Tillinghast Essential Works for the Study of Early Modern Women: Series III, Part Three, Volume 4, 2017 (While you can get this for $16 if you get it as a Kindle version, the hard copy is over $100, so seriously, get thee to a library.)