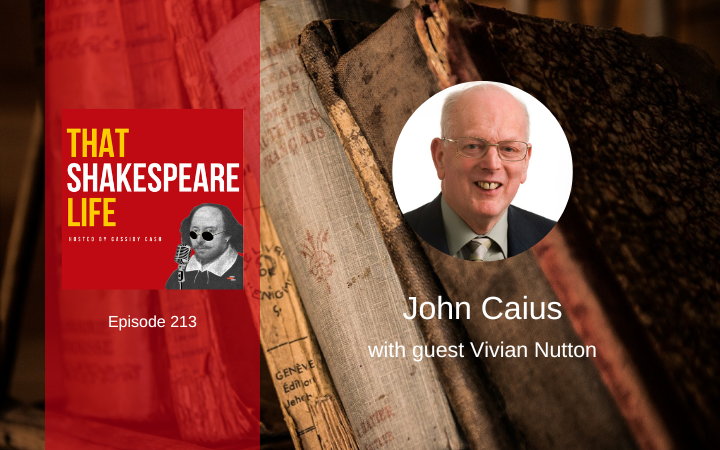 John Caius was a prominent medical professional in the 16th century. A staunch adherent to the teachings of Galen, who himself was the ultimate authority on medical knowledge for close to 15 centuries. John Caius owned a copy of Galen’s text and that original copy survives at Eton College, Berkshire, with Caius’ notes and annotations there for review. Galen’s work was essentially the Grey’s Anatomy of its time and Caius’ interest in Galen’s work was not merely being a fan, but the doing of his due diligence in medical study. However, despite the evidence to suggest he was a pillar of medical knowledge in the 16th century, training major medical figures of the period, John Caius is accused even in his own time, of being too much of a traditionalist, unable to change and grow with the rapidly evolving mindset of his time period and was even held responsible for annoying Queen Elizabeth at a medical forum that took place at court the year Shakespeare was born. As a result, about 30 years after his death in 1573, William Shakespeare satirizes his namesake through the comedic French doctor of Dr. Caius in Merry Wives of Windsor. Here today to share with us the life and accomplishments of the real Dr. Caius, is our guest, Vivian Nutton.

Vivian Nutton taught Classics at Cambridge before moving in 1977 to University College London, where he became professor of the History of Medicine for over thirty years. He has held visiting professorships in the USA, Canada, Australia and Russia, and is a member of learned academies in Britain, Germany, France and Italy. He has ranged widely over the whole history of medicine, but particularly over the classical tradition in medicine from the Greeks to the seventeenth century. His recent books include Ancient Medicine, of which a third edition  is scheduled for 2023; Galen, A thinking doctor in imperial Rome, 2020, an annotated translation of John Caius’ Autobibliography, 2018, and, just out, Renaissance medicine, a short history of European medicine in the sixteenth century.

What I will be asking Vivian Nutton in our show today:

The best biography of Caius is given by Christopher Brooke in his 1985 History of Gonville and Caius College. Greg Wells, John Hall, Master of Physick, 2020, translates the casebook of Shakespeare’s son-in law. Much is now available on the web: John Caius’ treatise, A boke or Counseill against the disease commonly called the Sweat, 1552, is fascinating in the light of Covid. No student of Shakespearian English can afford to neglect the writings of a contemporary surgeon, William Clowes, which gives a better flavour of medical life than any modern historian. There is a splendid selection by Noel Poynter, Selected writings of William Clowes, 1948,

Notes from Cassidy: You can find a pdf version of John Caius’ book here The book on William Clowes’ writing by Noel Poynter is not (at the time of this episode’s publication) available on Amazon. I was able to find a copy on Google Books and at AbeBooks

The Folger has a copy of this book, but it’s not available online. See their record here.

I was unable, by the time we needed to go to print on this episode, to find an online version of this book on William Clowes. If you know of an online (free to read) record please list a link to that resource in the comments.

“Go your ways, and ask of Doctor Caius’ house which is the way”

Establishing a medical reputation that lasts over 400 years is no small feat, yet Dr. John Caius is remembered to this day for his contributions to science. Despite is reknown, Vivian explains that it’s unlikely Shakespeare would have known of him personally. Instead, what Shakespeare knew of John Caius was cultural knowledge, and played a key role in why the name, Dr. Caius, would have been useful in the play Merry Wives of Windsor:

There’s no reason to think Shakespeare or even his medical son in law john hall would have known him but certainly he was well known in London. His name was used because medicine is always funny nad comics and playwrights include medics as either murderers or jokes. That’s why the caius in this play is a frenchman who speaks in this strange lingo, but the real Caius was of course and Englishman who spoke very well. Between 1570s and Shakespeare’s peak as a playwright, Caius had become known as a “Character”, where stories grew up about him and what people came to know about him was not necessarily truth.

John Caius’ unique personality and high profile figure made him an obvious target for jokes, like the presentation of Dr. Caius in Shakespeare’s play. He was however, contrary to what you might believe about him for Shakespeare’s treatment of his name, a highly influential man, well respected during his lifetime, whose respect remains intact today.

He was appointed by his fellow doctors, and doctors don’t like being told what to do by politicians or even Queens. What happened with John Caius is a wonderful example of how things can change in one’s own lifetime. He was in his youth and in his early 30s and 40s, in the forefront of European medicine but things moved on and that’s one reason why he becomes seen as a character. He was in life an eccentric, in some senses, He kept animals and birds in his house and there’s lovely note in one of his books in which he says he kept a pet puffin. Naturalists know that puffins are not easy to keep on land and they don’t like being caged. Caius records that when he tried to feed the bird, he tried to nip his finger, and Caius made a note that the bird was not being malicious. He certainly loved animals.

If you are as delighted as I am about John Caius’ menagerie of animals, know that you can read more of his notes about puffins, in the journals that Vivian recommends in the resources section of today’s episode. That’s listed above, with links, so scroll back up if you missed those.

“I pray thee, go to the casement, and see if you can see my master, Master Doctor Caius, coming.”

You can see the caduceus that Caius presented to Caius College at the Royal College of Physicians Museum. There’s records online and they tweeted a picture of the caduceus here. I have requested permission to use these images in our show notes here and will add them if they become available, but you can go directly to their website using the links provided here.

John Caius began his career as a physician, and focused on specifically the wealthy clients of the city. Vivian shares that we don’t have records of the specific people that were treated by John Caius, only evidence that he was employed by the upper class.

His main work and how he made his money was by treating the wealthy men in the city. You might describe him as a wealthy physician from LA or NYC, who treated the wealthiest in the community. That’s where he made his money. He studied in Padua, comes back to England and he begins a very successful practice. Unfortunately, we don’t have any names of patients we just know that he made an awful lot of money. He’s working and living in the city of London, right next to the wealthiest people in the country.

While Vivian does not name the royal patients of Dr. Caius, at least one record I was able to find indicates that John Caius was the physician to Queen Mary, Edward VI, and even Elizabeth I. He apparently was dismissed from this position as royal doctor on account of his Roman Catholic faith. (Source: Chisholm, Hugh, ed. (1911). “Caius, John“. Encyclopædia Britannica. Vol. 4 (11th ed.). Cambridge University Press. pp. 960–961.)

During his time serving at the royal court, Caius was consulted by Queen Elizabeth as part of a larger group discussion, and during his visit with her annoyed her because his voice was high, squeaky, and difficult to hear.

He was also an unusual figure, with a high squeaky voice, and when Queen Elizabeth in 1564 came to Cambridge to conduct an official visit, Caius was chosen to speak. We are told he spoke in such away that the King couldn’t hear him and got very annoyed and told him to speak up. As he grew older, he became if you like, out of touch, with anything. He always looked abc to what he called “Merry England” and the time of “good king henry” when men were men and children were well brought up and in his treaties on the sweat[-ing sickness] he explains why unusually it’s teenagers and young men who fall ill rather than the elderly, and while we don’t know what sweat was (might have been influenza), he blames the death of young ones on that to weakness brought on by sitting by the fire in their furs eating hot buttered toast, so they aren’t as tough as the older generation. His religious beliefs are out of touch with those of Cambridge and his rooms are ransacked by a committee at the university and he morphs into someone who is out of touch with [modern thought.}

The caduceus symbol presented to Caius College is not the same as the two snakes and a cross that is derived from Moses and traditionally associated with the “symbol for medicine.”

The caduceus itself has a long history (we should cover this on a future episode!) but as to not leave you in a lurch if you’re curious to learn more about that aspect of today’s show, here’s some resources for you. First, know that Caius didn’t create the medical symbol of the caduceus.

The caduceus was used as a symbol of medicine as far back as the 16th century. However, scholars debate about Caius’ symbol he gave to Caius College. As an example, Walter Friedlander writes, “what Caius used was a non-specific herald’s wand, rather than the caduceus of Hermes.” Friedlander quotes Caius in his publication where Caius talks about using a herald’s wand. Check out his work here. Friedlander, Walter J (1992). The Golden Wand of Medicine: A History of the Caduceus Symbol in Medicine. Greenwood Press. ISBN 0-313-28023-1. OCLC 24246627.

Another scholar, Bernice Engle, goes further to say that Caius’ symbol has nothing to do with medical symbolism, writing “[…] by introducing the caduceus into the ceremony of the College of Physicians, Caius unintentionally added to the confusion between the two emblems for later times, when few people understand the visual signs with which he was so familiar.”

Read more of Bernice’s perspective here: Engle, Bernice (December 1929). “The Use of Mercury’s Caduceus as a Medical Emblem”. The Classical Journal. 25 (3).