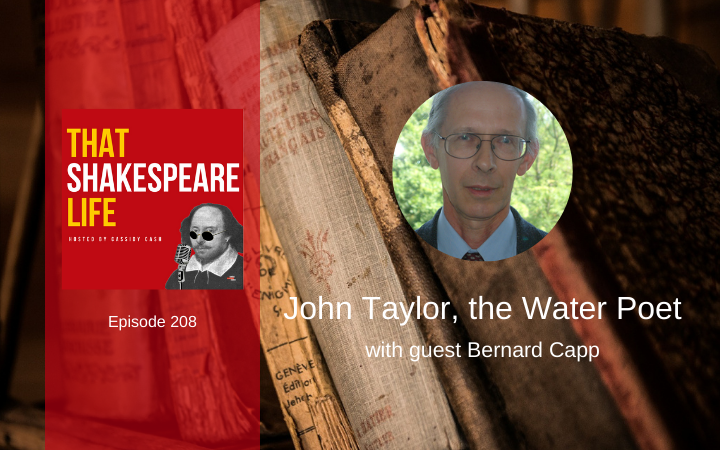 This post, and all the posts on our website, contain affiliate links. To access the detailed show notes previewed on this page, consider becoming a patron. Patrons get access to woodcuts, portraits, archival documents, and special content built into the show notes each week. Sign up using any of the Patreon buttons on this page to unlock the bonus history.

Welcome to Episode 208 of That Shakespeare Life, the podcast that takes you behind the curtain and into the real life and history of William Shakespeare.

John Taylor is a poet contemporary to Shakespeare, but with a decidedly unique approach to the writing profession. John Taylor trained professionally as a waterman, or a river worker who taxied passengers to and from city destinations on the rivers like the River Thames in London. John Taylor used his occupation as a waterman to talk with the various playwrights, actors, and patrons while they were on the boat with him between destinations. Over the years, John Taylor used what he learned from these conversations to craft himself into a poet with the purpose of re-inventing the unglamorous and ridiculed 16th century opinion of the profession of waterman into a more glorified occupation by naming himself The Water Poet. Taylor’s work did manage to earn him a position of leadership in a waterman’s guild, and he would write elegies for not only James I, but John Taylor was the first person to write about the death of William Shakespeare, when he wrote a poem mentioning the bard in 1620. Here today to tell us about the life and exploits of this unique character from the life of William Shakespeare is our guest, Bernard Capp.

Bernard Capp was born 1943 at Leicester, England, and educated at Oxford 1962-8. Capp taught in the History Dept of the University of Warwick for 52 years, 1968-2020 and is now Emeritus Professor of History there. He is also a Fellow of the British Academy and has published seven books on early modern English history, mainly with OUP, with an 8th coming out next year on ‘British Slaves and Barbary Corsairs‘, along with numerous articles and essays. He wrote a biography of John Taylor available from Oxford University Press.

I'll be asking Bernard Capp About:

The most important [resources] are my monograph on John Taylor, and the entry I did on him in the New Oxford Dictionary of National Biography. Only your college viewers are likely to be able to access these, but Wikipedia has a reasonable entry on him, mainly drawn from my book. John Chandler, ed., John Taylor: Travels and Travelling 1616-1653 (2020) reprints many of his travel pamphlets.

Note from Cassidy: The most extensive (and perhaps only?) biography on John Taylor is Bernard's work, John Taylor the Water Poet, which you can find on amazon or several places online. Digital copies are restricted to university logins, but you can get a copy to borrow and read from your local library.

Laurie Ellinghausen talks about John Taylor in Chapter 4 of Labor and writing in early modern England, 1567-1667

Literature and Class From the Peasants’ Revolt to the French Revolution By Andrew Hadfield · 2021 | Note: Andrew Hadfield has written numerous books on Shakespeare's history. Check out his author's list on Google Books here

The Country and the City Revisited England and the Politics of Culture, 1550-1850,1999, by Donna Landry, Gerald MacLean, Joseph P. Ward, Raymond Williams