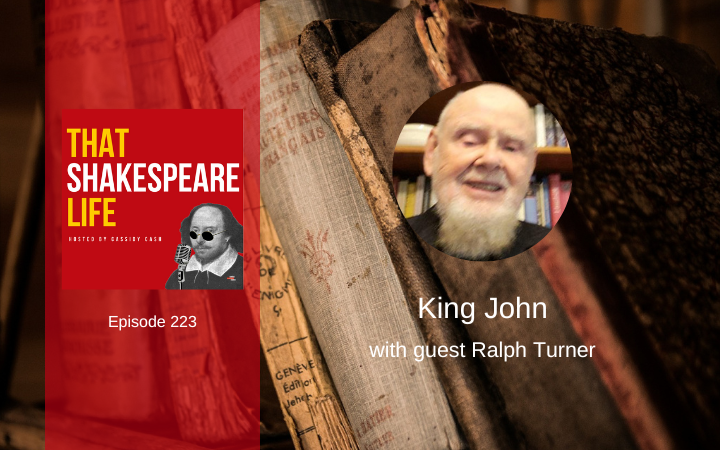 Welcome to Episode 223 of That Shakespeare Life, the podcast that goes behind the curtain and into the real life and history of William Shakespeare.

While King John isn’t one of the more popular Shakespeare plays performed by companies today, taking a look back at monarchs of the past was a favorite pastime for Elizabethan England. To better understand the real history behind Shakespeare’s version of this famous monarch, we’ve invited our guest and author of the book King John for The Medieval World, Ralph Turner here today to share with us the context of King John’s life, impact on the legacy of England, and exactly what led to him being so villainized for centuries to come.

Get notified about new episodes.

Sign up here to get a notification on Mondays about our latest episodes.

Ralph V. Turner is Distinguished Research Professor of History (emeritus) at the Florida State University, where he taught for over thirty years. His research field is the period of the Angevin kings of England and the common law. Prof. Turner has remained in Tallahassee, Florida, after his retirement where he continues to do historical research and writing.

I'll be asking Ralph Turner about:

King John Was a Bad King

King John was all together not good at being King. For many who knew him, they felt he was either unqualified to be King of England, or that he had seized power from his brother King Richard unfairly. Either way, during his reign, England suffered.

While Richard the Lionheart was away on his Third Crusade, John assumed power in England. After Richard's death, France agreed to support John as King of England in a Peace Treaty that was signed in 1200. This treaty was a win for Phlip of France because it stated that Phillip had control over John. At this time, there was a dispute over the lands in France concerning how much of France belonged to England and they were fighting, in particular, over the control of Normandy, and this peace treaty established agreed upon boundaries and France's control over King John.

While France had agreed to a treaty with John, they wanted Arthur to be King of England and supported his appointment.

At the time of Richard’s death they definitely wanted Arthur, he was at the French court at that time. His mother was had a mixed relationship with her family. She was married to Geoffrey, Eleanor and henry’s third son, and so that’s how Arthur had his claim to the throne through his father. She was not really happy with her in laws. The bretons themselves they weren’t directly controlled by the Kings, but they were in a long distance sort of way. They didn't’ want to be more tightly under Angevin Kings from Henry II onward, because he was originally Duke.

King John and the Death of Arthur

In Shakespeare's version of events, the young Arthur SPOLER ALERT: if you have't seen the play yet, watch it FIRST this is a huge moment in the production so STOP READING HERE and GO SEE THE PLAY then come back to the history.

This line is me giving you space to change your mind. Do you really want to know ahead of time?? Go to the THEATER.

Ok, if you're sure. Here goes:

Arthur dies by falling out of a tower where he is captured. The man charged with mutilating Arthur backs out because of Arthur's youth. He gets sick at the idea of messing up a kid. While he hesitates, Arthur makes a truly childish decision to try and escape through the window. Unfortunately, we learn through the dialogue that Arthur died from the fall.

In real history, those facts are ambiguous. We don't actually know how Arthur died, because he disappeared into the countryside and we simply never heard from him again. Ralph explains some of what we know about Arthur's disappearance:

…Arthur’s keeper at that time was William de Braose loyal to John, but eventually they parted company, he had lands on the Welsh frontier, and there was a Welsh abbey that kept a chronicle going, wrote a history, and that was one of the main sources about information about Arthur's death, and it’s assumed that William must have talked to them, and there is another chronicle Ralph of Coggeshall. He has a good bit on Arthur's death, but he was probably not as well informed as the Margum monks were, so we have the story from two sources and it indicates that John ordered [Arthur's] killing, but we don’t know that John actually killed him himself.

[We do know that] Arthur and his mother escaped when they were first captured by John when war first broke out but that was much earlier. His later captivity, one where he died, he was captured after a battle that John won (his biggest victory in [John's] life), so then [Arthur] was imprisoned and he had another guard, Geoffrey Fitzpeter, prominent in the government, and the story is that John ordered Geoffrey to blind and castrate Arthur to make him unfit for the throne. It was a known punishment from the Middle ages, albiet somewhat antiquated by this time. Geoffrey refused to do this, couldn’t bring him self to do that, and Arthur was transferred to another guardian, Rouen, capital of Normandy, and at that time he died…but we don't know how he died.

When Arthur dies, John's fight for the throne does not disappear, but the conflict it creates ultimately leads to the signing of the Magna Carta.

Arthur’s death left a bad taste in the mouth of the barons but John  was stably on the throne, but there was opposition that grew throughout his reign. 1205 had a horrible fight with the Pope….the Archbishop of Canterbury, England was placed under an interdict, and bad things happened because of that. Later in his reign, [he] lost normandy to Phillip Augustus, he was raising an army for the Welsh, and as the troops were gathering the barons were plotting to overthrow john and that plot was exposed. It didn’t succeed. The actual rebellion didn’t break out until 1215. Then of course that resulted in Magna Carta, where John had to admit that his powers were limited.

In Shakespeare’s version, John dies from poison. Ralph explains that while John did die, we don't know for sure if he died of poison.

John didn’t die until 1216, so he lived a great time after Arthur’s death, and there’ve been rumors that he was poisoned but it doesn’t seem likely.

John was in the middle of leading a military attack when he contracted dysentery and died from the complications of that illness. It was relatively common for soldiers to contract dysentery, but rumors persisted about John's bout with the illness being caused by something more sinister. Those rumors are considered largely implausible by many today. For Shakespeare's lifetime, however, it was a commonly known as a possibility for how John dies, making it more than just artistic license for Shakespeare to select that mode of death for his fictional retelling of the historical life of King John. For his audience, they would have accepted poisoning as a plausible way for John to have died.

King John and the Magna Carta

The Magna Carta remains a powerful symbol of individual liberty today. For the 17th C, particularly under James I during Shakespeare's lifetime, the Magna Carta was suppressed because it questioned the divined right of Kings and rulers like James I did not want their authority questioned by the people for fear of riots and coup.

The Magna Carta was designed to protect individual liberties and bring peace between King John and the Feudal Barons. The charter guaranteed the protection of church rights, guarded the barons against imprisonment, allowed for a swift carriage of justice, and put strong limits on taxes to the Crown. While the original charter was quickly broken on both sides, it was reissued by John's son, when it officially got the name “Magna Carta.”

In England, the signing of the Magna Carta saw the establishment of the first Parliament of England. The charter became a mainstay of English political and legal system. In the 16th century, during Shakespeare's lifetime, is when a large resurgence of interest in the Magna Carta in England resurfaced with the legal system believing the Magna Carta was the foundation for rights like habeus corpus.

The Magna Carta persisted as a symbol of individual rights and liberties, forming the foundation for the original 13 American colonies, and the foundation the American Founding Fathers used for the US Constitution.