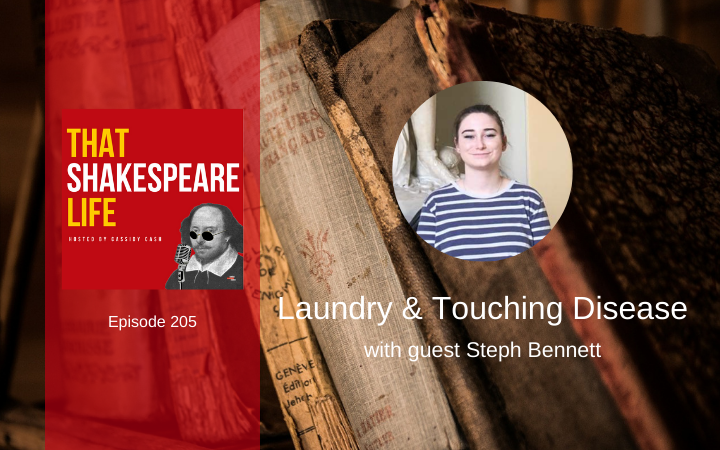 Welcome to Episode 205 of That Shakespeare Life, the podcast that goes behind the curtain and into the real life and history of William Shakespeare.

In the 16th century plague impacted Shakespeare’s daily life through regular closings of the theater due to the fear of disease spreading in enclosed spaces. In addition to large crowds gathering together in the theater, contemporary science warned against one particular threat of contagion: the laundry. It was believed that certain materials could spread disease by their relationship to the body. For example, linen was thought to be protective against disease by wicking the sweat and body odor away from the wearer. While linen was protective, other fabrics were deemed more dangerous while washing techniques, including using soaps like lye- a highly caustic cleanser made from wood ash, could help prevent disease. Our guest this week, Steph Bennett, is the author of “Cloth, Contact, and Contagion: Touching Disease of the Past and Present” for the Social History Society. Steph joins us today to talk about the 16th century understanding of disease and how proximity, material, and the interactions between the skin and clothing were thought to prevent or transmit disease.

Steph Bennett graduated from the University of Leeds in 2020 with a First in History and English and graduated in 2021 with a Distinction in the History of Medicine, Health and Society. She is a full-time Archive Assistant at the West Yorkshire archive service, working regularly with household collections and medical records. Her academic research revolves primarily around the skin and its' contact with disease and the material culture of textiles and soaps in early modern England. Steph is currently applying for PhD funding with the University of Sheffield.

This week, I'll be asking Steph Bennett about:

Go your ways, and ask of Doctor Caius' house which is the way: and there dwells one Mistress Quickly, which is in the manner of his nurse, or his dry nurse, or his cook, or his laundry, his washer, and his wringer.

Linen was protective against disease

Undergarments, and specifically linen undergarments, weren't just regular clothing items for the 16th century. These items were thought to protect a person from disease, almost exactly like having on a filter. The thought process was that if a person wore linen, then the dangerous odors or germs in the air (although the concept of “germs' wasn't known yet), would get caught up in the linen and protect the wearer from harm. You can think of this like a full body mask. Steph explains,

Linen removed dirt and sweat from the skin. The skin was to be porous, so it was understood to be open and could receive disease from the air. The skin operated as a barrier for the inside body against the outside world. It was important to protect the skin. As it was impossible to close pores entirely, linen was used to help block that entry point. They were changed regularly and many early modern people believed they were being healthy as the linen was absorbing those excretions and changing linens regularly was considered cleaner than washing.

Plague ridden linens were tossed away

While your everyday linens would have been washed to try and cleanse them of any impurities, linens of a sick person, and most particularly of anyone in contact with plague, would be thrown away and burned to prevent spread of disease.

According to Steph, burning was even required legally under some monarchs of the period:

Most of the time they didn’t try to save it. Plague was so dangerous they burned the clothes and any noxious scents were thought to be harbingers of disease (hence the popularity of pomanders, etc), women’s underclothes and promoting good health in popular manuals included washing with soap.

There were two main types of soap used to clean clothing and it was the same soap options available for cleaning the human body. There was lye soap and castille soap. Castille soap was often imported from Spain or France, rather than made in England, while the white lye based soap would have been commonly made by individual households as well as sold in local shops. For laundry, in particular, urine was also routinely used to clean bed clothes as the ammonia in the urine was a reliable cleaning agent for large linens. Before the advent of the first flush toilet, urine was collected by locations like inns for this precise purpose.

No more, I say! For that I have not wash'd

Odors were held under suspicion

Theories about germs and bacteria had yet to be developed in the world, so for Shakespeare's lifetime, there was a known association between bad odors and sickness, but there was a huge lack of definition in terms of precisely why the bad odors were present or how to respond to the disease the odor indicated. As a result, the bad odors themselves were often blamed for disease, and as Steph explains, the bad odors were often thought to accompany the bad lifestyle choices of the person who emitted the odors.

A man named James Balmford, in 1603, wrote that he was most displeased with the airing of certain clothing items. It seems was Mr. Balmford was worried that the stench of the clothing would cause disease. Steph explains,

“…a popular theory at the time was that poisonous airs and noxious fumes arose from corruption so once putrid air entered the body, it could attack the enter body, and the ailment could be exhales via the breath.

Places like marshes and swamps or stagnant water, or places where there were dead things and putrid flesh (butchery, etc), the smells from these industries were thought to be capable of infecting passersby or anyone who inhaled it with disease.”

All swoln and ulcerous, pitiful to the eye
The mere despair of surgery, he cures,
Hanging a golden stamp about their necks,
Put on with holy prayers: and 'tis spoken
To the succeeding royalty he leaves
The healing benediction

Henry VII established a tradition that the King was empowered by God to cure sickness through touching a sick person. The tradition continued under Elizabeth I and then later James I, to cure a disease called scrofula or the King's Evil. This disease is known scientifically today astuberculous cervical lymphadenitis, but it was thought to be curable by having the Queen (or later, the King) touch the sick person, offer prayers, and hang a gold coin about their neck.

Shakespeare alludes to this practice in his play, Macbeth, when Malcolm described Edward the Confessor performing this ceremony:

A most miraculous work in this good king;
Which often, since my here-remain in England,
I have seen him do. How he solicits heaven,
Himself best knows: but strangely-visited people,
All swoln and ulcerous, pitiful to the eye
The mere despair of surgery, he cures,
Hanging a golden stamp about their necks,
Put on with holy prayers: and 'tis spoken
To the succeeding royalty he leaves
The healing benediction

The process of being cured by the monarch consisted of the monarch touching the infected areas of the sick person, hanging a gold coin around their neck, reading specific passages from the Bible that talk about a monarch being immune to disease, and then praying for the sick person. Up until the Protestant Reformation prayers were offered to the Virgin Mary, and afterwards these prayers were offered to God. The practice continued throughout the reigns of Elizabeth I and James I, although James adapted the procedure to remove the requirement of actually having to touch the infected areas.