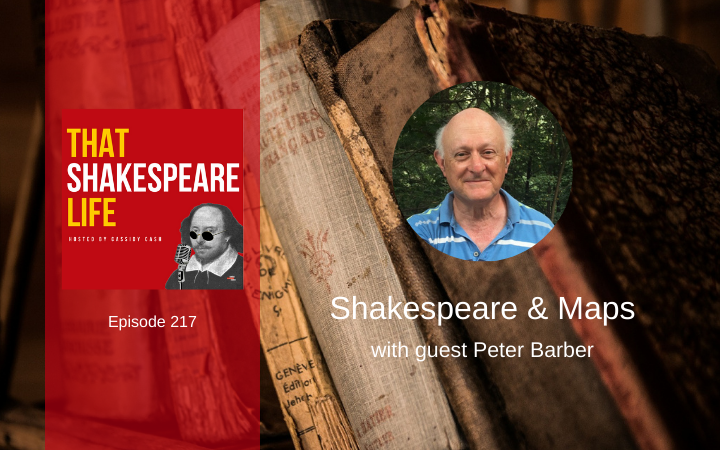 Welcome to Episode 217 of That Shakespeare Life, the podcast that goes behind the curtain and into the real life and history of William Shakespeare.

Transoceanic travel was a staple of European endeavors for the 16-17th century, with both Elizabeth I and James I spending massive amounts of money and effort to work with trading companies and explorers who traveled to other continents for trade, commerce, and colonization during Shakespeare’s lifetime. In order to reach these new and exotic places, as well as to be able to return again after the new places had been found, the sailors and explorers relied mainly on navigation by the stars and the wind to get to their destination. However, this time in history is when printed maps and manuscript charts started to be used as a fall back for navigation, and in some cases for political propaganda. It was the maps of John Smith that the Pilgrims consulted to get to the New World, and when Sir Francis Drake circumnavigated the globe in the 16th century, a hand illustrated map of his journey was created in the 1570s. Shakespeare references a “map of the world” in Henry V, and a “map of ports, piers, and roads” in Merchant of Venice, along with 14 other references to maps and “mappery” in his plays. Here this week to help us understand how mapmaking worked for Shakespeare’s lifetime, exactly who it was that were employed as cartographers, and whether or not the maps sailors relied upon were accurate, is our guest and former Head of Map Collections at the British Library, Peter Barber.

Peter Barber was Head of Maps and Topography at The British Library between 2001and 2015.  He has written and edited several books on old maps meant for the general public as well as contributing numerous academic articles and chapters to journals and scholarly publications.  He is particularly interested in maps from before 1800 and their historical, political, courtly, cultural and psychological contexts. He continues to research and write and to contribute to and advise on radio and television programmes and series about historical maps.

I'll be asking Peter Barber about:

This post expands! There's more details inside including maps of the 16-17th century England, portraits of Elizabeth I and more. Become a patron to unlock these bonuses. Here's what's inside this week: