Milksop Recipe, Much Ado About Nothing 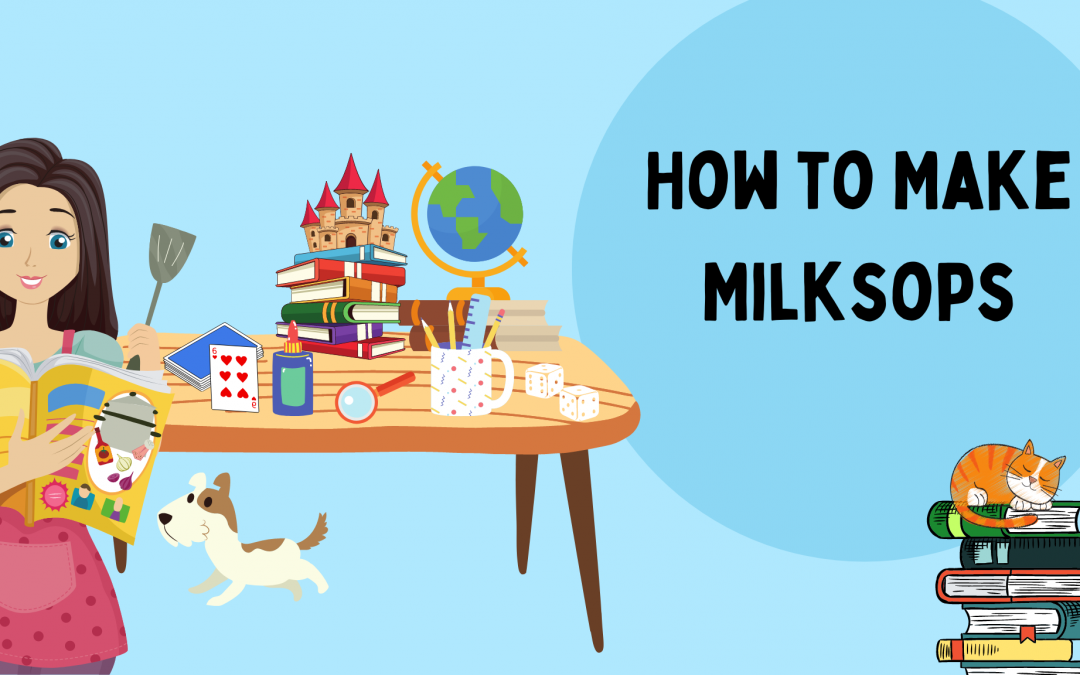 That Shakespeare Life and DIY History are supported by our patrons. You can become a patron and get printable instructions for our DIY History episodes right here. This website contains affiliate links.

Milksop is a great deal of much to do about nothing. I didn't realize how appropriate this recipe is for the play, Much Ado About Nothing, until I started putting together this week's episode. If you've been around, you may know that I really enjoy exploring the odd words that show up in Shakespeare's plays and then explaining what they are, where they come from, and the history around those words.

Milksops is a word that comes up in Much Ado About Nothing V.1 as an insult. Well, milksop is really not a recipe (at least not formally), but it is a real food from the past, and I am going to tell you all about it today even though, it is a great deal of much ado about nothing. (That might make it perfect for your next play study as a hands on application.)

In Shakespeare’s play, Much Ado About Nothing, Antonio uses the term “milksops” to talk about a weakling of a man. He uses the word in a string of insults including Jacks, braggarts, and apes.

Because bread soaked in milk until it is, as the term suggests, “Sopping wet” is a clear image of a some thing, or in Antonio’s case, someone that “falls apart easily” the reference along with two others from Taming of the Shrew where Shakespeare uses the word “sops”, has me wondering where this word and this particular insult actually came from.

The word “sop” comes from the Old English and means “Bread soaked in some liquid.” the meaning of sop as a verb meaning  “to drench with moisture”  comes from the 1680s. (Source)

To make this milksop yourself is very simple. You just take a bowl of milk and you place a piece of bread into it. The bread will immediately soak up the milk and start to disintegrate. I can actually remember my grandfather choosing to eat this meal himself for dinner sometimes, opting for buttermilk as his liquid of choice for the bread, but despite being very simple, there’s a long history of people for a variety of reasons enjoying their bread as a sop, or full drenched.

There’s a etymological link between “sop” and “soup,” as you might expect, and even with the word “supp” meaning to eat.

The ancient Greeks had a specific meaning for the word “sop” and that’s the one borrowed by the English in the mid-17th century. In the Aeneid, “sop” was the food travellers were told to take with them if they wanted to cross the Styx river into the underworld. The monster Cerberus would be appeased in his anger, and therefore allow you to cross the river, if he was given sops. In this case, sops meant cake soaked in honey which Cerberus would gobble up instead of gobbling up the travellers.

That’s one reason that in the 17th century, sops would also mean “something to appease”

According to ShakespearesWords.com, none of Shakespeare’s uses of the word “sop” or “sops” ever applies then meaning “something to appease” and only ever uses it to mean “a mess” which, if you’ve ever soaked bread in milk you know it becomes a mess quite quickly.

Just when I thought bread soaked in milk was the end of my investigation into milksop, I discovered that the word is also was a specific surname, or last name for those of us in the US, and that name dates not only to Shakespeare’s lifetime, but back even further, all the way to the 13th century.

Milksop was eaten in Shakespeare’s lifetime, but almost as something you made when you didn't have something else as opposed to an official dish for which there would be a recipe.

It was also a common mixture for feeding the elderly or the infirm when they could not eat regular meals because it is soft and easy to swallow.

There are even some recipes of baby formula being made from this kind of combination.

While milksop wasn’t a formal recipe, I was able to find a 16th century recipe called Milk Bread and I couldn’t finish up this episode without sharing it with you.

This recipe is Italian and given the fascination with Italy and all things Italian that was happening in Shakespeare’s lifetime, I wouldn’t be surprised at all to learn of people in England giving Milk Bread a try.

One of the recipes within this book is Prima per Fare Cinquante Pani de Latte e Zuccaro di Oncie nove l'uno which roughly translates into English intoto First (how) to make fifty Bread (of) Milk and Sugar, nine ounces each. This bread recipe is one of the forefathers to modern day Pane al Latte, better known as Italian Milk Bread. The original recipe yielded 50 miniature loaves weighing approximately 9 medieval ounces.”

If you are about to study Much Ado About Nothing, Taming of the Shrew, or Romeo and Juliet, and you’re looking for a hands on way to explore the word “milksop” as it appears in those plays, making some milk bread yourself might be a great visual. Plus, it’s always fun to try out something from Shakespeare’s lifetime.

For printable instructions and supply lists for the recipe I mentioned today, download the guide from That Shakespeare Printable Library on Patreon.

That’s it for this week! Thank you for watching. I’m Cassidy Cash and I hope you learn something new about the bard.

I’ll see you next time! Goodbye.

Sources and Other Useful Links:

link text https://ldyverena.livejournal.com/8523.html Source link for the image of the Aenid/a>