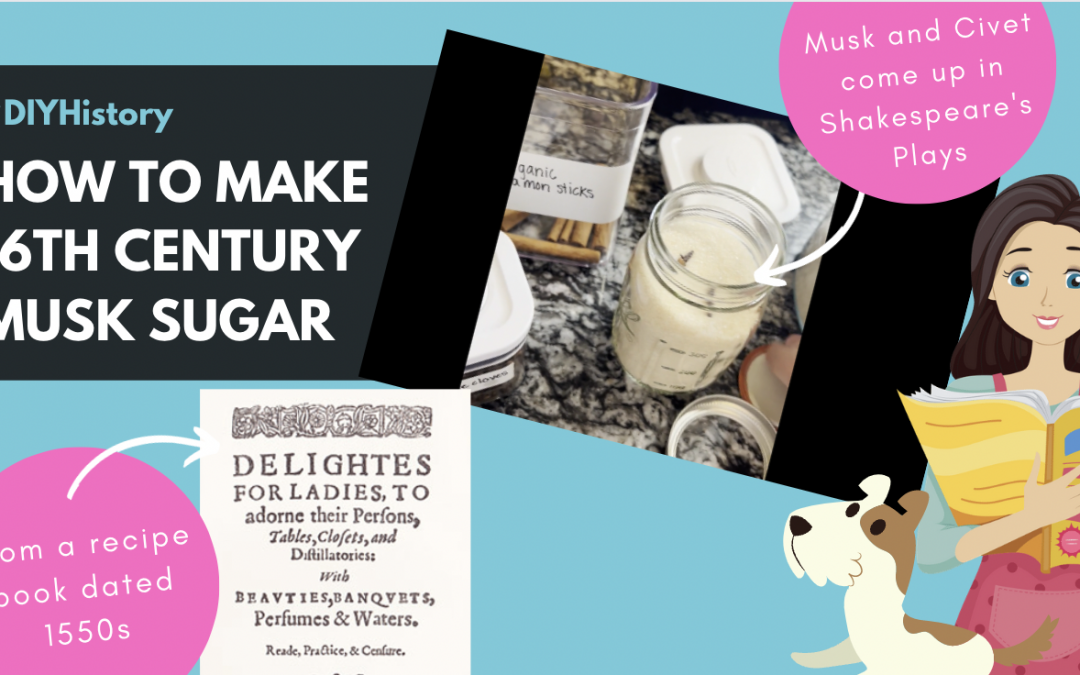 Musk Sugar appears in a recipe from the mid 1550s by Sir Hugh Plat where he tells you how to make a scented sugar for cooking. This recipe comes from his book Delights for Ladies, published in the late 16th/early 17th century.

The fragrance musk is the same scent you think of as being a mainstay in cologne or perfume, was a very popular fragrance and even spice for Shakespeare’s lifetime.

You can find musk in the musk pod, a foreskin gland in a pouch, or sac, under the skin of the abdomen of the male musk deer. (It's his pheromone producing gland used for mating).

Fresh musk is semiliquid but dries to a grainy powder, that's why you see musk draining from the deer in the image.

Originally derived from the musk deer, the term “musk” applies to any animal that emitted a similar odor including the musk cat, the musk ox, and the musk rat. The fragrance derives from the musk beetle, the African civet cat, and even the North American crocodile which has not one, but two, glands from which is produces musk.

There are also several plants like the musk wood and the musk flower that produce this scent, and of course today there are many artificial synthetic versions.

This specific fragrance attracts the person or animal smelling it, which is what makes it so popular in cologne. Now, if you’ve ever smelled one of these particularly odorous animals like the musk ox or a civet cat, (we have one at our local zoo), you know their scent is quite nasty, even gross.

So why is this smell popular in alluring fragrances? The good smell distills down from the original secretion to extract the attractive fragrance.

Shakespeare talks specifically about the civet perfume in his plays.

The courtier's hands are perfum'd with civet”

It must have been really pungent smell for Shakespeare’s lifetime, too, because Don Pedro in Much Ado About Nothing says the fragrance was quite pervasive;

Nay, a' rubs himself with civet: can you smell him out by that?

Much Ado About Nothing III.2

The smell of musk appears in Shakespeare’s plays. In Alls Well That Ends Well, the Clown mentions the musk cat

The musk deer from 1491 names the image “musk cat” so The Clown may actually be talking about a deer here, but that requires more research to determine.

Hostess Quickly talks about musk being a sweet smell when she says , “smelling so sweetly, all musk…” (Merry Wives of Windsor, II.2)

The sweet smelling “musk-rose” appears three times in Midsummer Night’s Dream. There must have been plant based options for getting that musk fragrance in addition to animal sources.

The recipe itself is very simple, provided you can get a hold of granular musk.

The “sarcinet” is a piece of silk cloth. Wrap it up and place it in the bottom of the container then cover the musk with sugar.

Turns out, Musk can be illegal, so I decided to recreate this recipe using cinnamon sticks.

Take about 1-2 cup of plain sugar and place it in a bowl that has a lid. Add 1-2 sticks of cinnamon into the sugar and let it sit for 3 days.

Next, Then when you go to cook with it, you now have cinnamon infused sugar.

Also works with whole cloves. To make the sugar easier to dispense, wrap cinnamon or cloves in a cheesecloth before submerging in sugar.

After that’s been sitting, it smells really fragrant. Like cinnamon! I can only imagine the musk smell that would be in the sugar from those civet cats.

Well that’s it for this week! Thank you for watching. If you try out your own 16th century infused sugar, let me know about it in the comments! I'll see you next week!