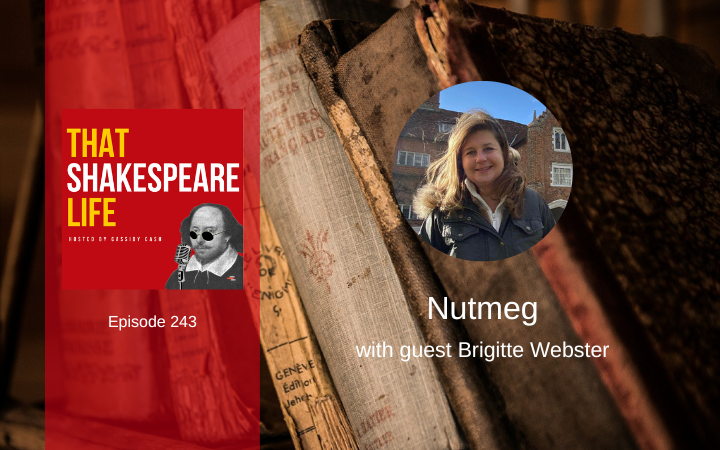 Shakespeare mentions the spice of nutmeg in his plays three times, once in Henry V to comment on the color of of this spice, once in Love’s Labour’s Lost to talk about a “gift nutmeg” which was a gift given at Christmas for the 16th century, and then again in The Winter’s Tale when the clown lists nutmeg as one of the spices he needs to make warden pies, along with mace, dates, prunes, and raisins. Nutmeg not being native to England, it was not only a valuable spice that made a great gift that was popular for major celebrations like Christmastime, but it was a huge part of international relations for England because during the 1600s was when the Dutch were committing all manner of atrocities against England (and indeed the world), to maintain a monopoly on this particular spice. Here today to share with us the history of this spice and some popular recipes that used it from Shakespeare’s lifetime is our friend, culinary historian, and returning guest to the show, Brigitte Webster.

Brigette Webster is a culinary historian and author of A Banquet at the Old Hall: an Invitation to Participate in Historic Cooking. She is also the author of the forthcoming book Eating with the Tudors due out Spring 2022. Brigitte and her husband Tom are owners at Tudor and 17th Century Experience, a unique living history centre with authentic accommodations that let visitors step back in history to experience life in England’s 17th century and author of Offering designated open days, “taster days “, weekends and custom-made holidays, Brigette’s unique home lets guests travel back in time to fall in love with 17th century English history. Find links to the Tudor and 17th Century Experience and more about Brigitte’s publications in the show notes for today’s episode.

I’ll be asking Brigitte Webster about:

Nutmeg was an exotic luxury spice

As Brigitte explains in this week’s episode, nutmeg was found in Europe as early as the 11th century, but the knowledge about where nutmeg was coming from wasn’t widley understood until the 16th century. The mystery surrounding the origins of the spice added to the luxury appeal.

Nutmeg from the Banda Islands

During Shakespeare’s lifetime, there was only one place where nutmeg was grown and distributed and that’s the Banda Islands.

“The Banda islands are so small that they are only found on specialized maps. The main island, Banda, is 3km long and 1.3km at its widest point, so you can see how small they are. There is another island called Run, that’s significant in later history because it was exchanged for Manhattan in 1667.”

The Banadese inhabitants traded their nutmeg with several countries including the Chines, the Arabs, and the Malaise. Nutmeg was in such demand that the spice was being sold by the Portuguese for 1000% profit “which makes you understand from 1553, the English started to show an interest in getting involved in the spice trade.”

The English were not successful in their trade of nutmeg until Sir Francis Drake succeeded with his voyage in 1577. Sir Francis Drake followed the same travel route as Magellan. The Dutch were trying to not only trade with the Bandanese but they wanted to control the spice trade entirely. They formed the Dutch East Indies Trading Company for this purpose.

“Jacob van Heemskerck, 1599, arrived and by 1603 they had achieved their target using sheer brutality and force towards the inhabitants. Sadly, the English landed on the smallest of the Banda Islands, the later famous island of Run, where they were welcomed and a treaty was agreed with the leader there. All the rights over the island were given to the English and that particular treaty that caused a lot of trouble later. However, on the 23 May 1602, the Dutch managed to extort a treaty from some of the [native Bandanese] to give [The Dutch] the trade monopoly on Run.”

Hemmskerck was part of the expedition with William Barentz to the Arctic that brought polar bears to England. Read more here. Our episode with Aubrey Whitlock also explores the polar bear history.

In 1609, the dutch landed on the Banda Island with heavily armed forced and started to build a fort which was later known as Fort Nassau, however, the Dutch who mistreated and enslaved the inhabitants of Banda were lead into a trap by the leader there and the Dutch admiral and 30 if his companions were beheaded. The ruthless behavior by the dutch colonial power on Banda did not only result in a major massacre on the Bandanese but made the survival of the English on Run extremely difficult. Only in 1620 the leader of the english troops on Run Nathaniel Porthope died under mysterious circumstances nad the dutch were finally able to occupy the last of the spice islands. And in doing so, they got their nutmeg .Their role was to enforce violence, suppression, humiliation and exploitation. On the 9 May 1621, they started the first genocide in modern history as they systematically killed all male inhabitants under 15 and sold the women and men as slaves. Estimates suggest 90% of the population was slaughtered. After all the Bandanese was removed, the Dutch repopulated the place with Dutch citizens, the Pekinese, and by the mid 17th  century, the nutmeg trees were cut down and the treaty of 1667, the small island was exchanged for Manhattan and the nutmeg was exchanged for the big apple.

“I must have saffron to colour the warden

pies; mace; dates?—none, that’s out of my note;

nutmegs, seven; a race or two of ginger, but that I

may beg; four pound of prunes, and as many of

Depsite being a luxury item and difficult to get with the massive Dutch control of the import and export of nutmeg during Shakespeare’s lifetime, nutmeg was sold and available for purchase in shops around London.

In Early Modern England, all spices and drugs were closely related but generally a spice merchant or sometimes a spicer, sold medicines and spices while the apothecary provided spice sweets and material for cooking. In truth, the difference was never very clear. At times, even non existent, however, because nutmeg and other spices were luxury goods, they were only sold in wealthy areas like London and of the big cities.

Nutmeg is actually the pit of a fruit that grows on a tree. The pit has to be dried and then the outside of the pit can be scraped off to cook with the spice. Brigitte shares the process of getting nutmeg from the ship to the pantry:

The nutmeg and mace, mace being a woven scarlet fruit fiber under the outer husk of the nutmeg seed, are both dried first. First on fire and then in the sun. This drying period is generally a month long and only in this semi-processed form do they then arrive in Europe. ON the table the nutmeg had to be grown with the help of a grinder and served in a specific spice vessel known as a nef, that came in the form of a ship. Nutmeg grinders only came into fashion in the early 1680s when an anonymous person in London had a silver one made for himself for personal use. People who could afford the nutmeg wished to grate it themselves to avoid adulteration. The first designs were silver cylinders with a separate grater, but silver ones would blunt over time and from 1697 when the higher silver grade was required, the steel form became more common. The earliest steel examples were tear drop shaped and decorated with scratch engraving.

Brigitte shares that nutmeg was used widely for cooking in Shakespeare’s lifetime. One of the most common places to find this spice used in a recipe was in a recipe for a spiced wine called Hippocras.

…everyone was familiar Hippocras, a spiced wine., It was very common and very popular but nutmeg was the main ingredient of Camolin sauce, pie recipes, pancake recipes, tarts, and also a lot of mead based dishes.

Brigitte shares that while nutmeg was not only used at Christmastime, it was often given as a gift for the Christmas season, including one time when it was given to Queen Elizabeth I.

It wasn’t necessarily used only at Christmastime, but there’s certainly evidence that the spice was given as a present. Queen Elizabeth was often gifted nutmeg on New Year’s Day. Spices such as nutmeg were also used daily as a neutralizing agent for food. That was considered cold and wet, and if you added nutmeg it would warm it up. To stay healthy meant you had to keep your humors balanced, so [nutmeg helped balance your food.]

In Shakespeare’s Love’s Labour’s Lost, Shakespeare writes about a “gift nutmeg” (some editions of this play have it spelled “gilt” nutmeg with an “l” but I will link to some scholarship on this part of the play that suggests this reference is to a specific gift of nutmeg that would have been given at Christmastime.

Using the spice as Medicine

Like many spices in Elizabethan England, nutmeg was not only used for adding flavor but (as we have previously mentioned) played a strong role in balancing the humors, which was foundational to medical care in the 16th-17th century.

Yes, definitely. The famous Tudor physician Boord in 1542 a dietary of health that nutmeg was good against head colds, comforts the eyes, brain, stomach, and the mouth, Thomas Elliot physician in elizabethan time, claims they comfort the sight and the brain. He mentions that nutmeg is hot and dry in second degree, which makes it the perfect compliment for cold and wet food.Tudors also believed the nutmeg would be effective against gastric distress and flatulence especially when cooked with wine. It was also praised as aphrodisiac which explains spiced wine like Hippocras was a popular drink to give the bride and groom on their wedding day.

Brigitte shares that yes, you can actually be poisoned by too much nutmeg, but you would have to be trying very hard.

There is something like too much of a good thing, but under normal circumstances it’s highly unlikely. You’d need to consume more than 5 gram in one sitting which is roughly the quantity of 10 nutmegs. A little nutmeg lifts the spirits but too much will result in hallucinations, dizziness, loss of sight and speech , racing heartbeat and can induce abortion and also finally, death.