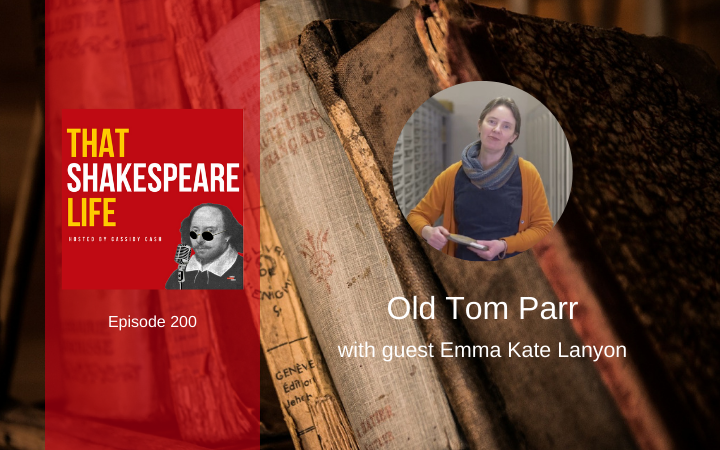 One of the ways we fund the podcast is through affiliate links. If you purchase these items through our links, we make a commission that goes towards maintaining podcast operations (while maintaining the same purchase price for you). This post, and all the posts here on our website, may contain such affiliate links.

Welcome to Episode 200 of That Shakespeare Life, the podcast that goes behind the curtain and into the real life and history of William Shakespeare by interviewing the experts who know him best.

Old Tom Parr was born in the late 1480s, and died at an astonishing one hundred and fifty two years later in 1635. Old Tom Parr is famous for living longer than any man in England before or since his lifetime.

Overlapping Shakespeare’s lifetime entirely, being born before the bard and living more than twenty years after the bard’s death, Old Tom Parr was born in Alderbury, England, and lived in Shropshire, where still today there is a small cottage called Old Parr’s Cottage that you can visit today.

The cottage’s preservation and that of Old Tom Parr’s memory is a testament to this man’s extraordinarily long life. His longevity has been attributed to a unique diet, and specifically enjoying what one 16th Century physician called a “care free” life. To put the length of his life into perspective, Old Tom Parr would have lived through both the Battle of Bosworth, and Shakespeare’s retelling of it on the early modern stage over 100 years later.

A portrait of Old Tom Parr hangs in the Shrewsbury Museum and Art Gallery, and one of the curators there, Emma Kate Lanyon, joins us today to share the history of this portrait, as well as details into the surprising life, and death, of the longest living man from Shakespeare’s lifetime: the real Old Tom Parr.

Emma Kate Lanyon opened her first museum at just nine years old in her bedroom cupboard and has loved being a curator ever since. Emma Kate has worked in museums in Shropshire and the Welsh Borders for over 25 years. During her time with Shropshire Museums, she Emma Kate has worked with a fascinating and diverse collection to bring alive the stories that make Shropshire so special.

While working as a musuem curator, Emma Kate has travelled into Roman Hoards excavations, deep into attic storage to rescue trunks of Victorian costumes, and even out on the road driving a 7.5 tonne mobile museum. Emma Kate Layon was the lead curator for the new Shrewsbury Museum and Art Gallery which opened in 2014. This museum move included the reinterpretation of the portrait of Old Parr which Emma Kate joins us to discuss today. https://www.shropshiremuseums.org.uk/

In this episode, I’ll be asking Emma Kate Lanyon about :

What we know today about Old Tom is mainly due to a pamphlet written by the poet John Taylor in 1635.  It was reprinted several times and copies can be found in several online library collections.

www.shropshirehistory.org.uk – includes a great interactive map of Shrewsbury in the 1630s which is linked to lots of research which will give you a glimpse of what life in the Tudor town and will provide an insight into Shropshire in the days of Old Tom’s and some of his contemporaries in the town.

Our portrait of Old Parr, images of his cottage and some of the items from his home can also be found on our website www.shropshiremuseum.org.uk  – just search “Parr”.

What was the life expectancy, anyway?

Old Tom Parr’s age is often emphasized alongside stories of short life expectancy in Shakespeare’s lifetime. It is important to remember when examining the idea of longevity for Shakespeare’s lifetime, though, that the “average” is influenced heavily my infant and childhood mortality that skews that number down. What Emma Kate Lanyon shares with us in this episode is that for people that lived into adulthood (and that was a feat to accomplish) those adults routinely lived to 60-80 years old.

Today, historians and statisticians throw it around and they quote around 35 years for the 16th century, however it doesn’t mean people were dropping dead at 35, but that the vast majority of deaths were occurring in infancy and childhood. 40 % of children died in their first year, dysentery, smallpox, etc, killing children before they reached 15. They worked and played unsupervised, which meant accidents happened frequently. Drowning in a bathtub or falling in a well was a common death for kids under 5. Another cause of death included young children monitoring their children as inexperienced caregivers which would also create dangerous situations, increasing death rates. Children also worked at young ages, which put them at risk of injury, and danger from fire or chemicals. If you could survive childhood, you were likely to reach 60 or 80.

– Emma Kate Lanyon (excerpt from the audio on this episode).

Old Tom Parr May Not Have Really Been 152

When Old Tom Parr claimed to be over 100 years old, it could have been an innocent mistake on his part. Firstly, records weren’t great and the records they did have about his birth they did have could have been those of a relative. Additionally, it was hard to nail down Old Tom Parr’s age because the people who could have verified or confirmed his estimations were dead from a variety of catastrophe’s that struck Shropshire. Emma Kate explains,

Claiming to be over 100 years old by this period…was based on hearsay… because recording of baptisms didn’t begin until after his birth year (began in 1538) and not all births were correct, mistakes could have been made. Possible no one left alive in the village to confirm or deny his claims. One reporter 1576, [writes that there was a] great flood in Shrewsbury that was followed by plague. There were several other outbreaks during that period and this one chronicler summarized that “he who had no mischance…in 87 unhurt and unslain may be living to the year 89…” in short, [this report] suggests the late 16th century was taking it’s toll on Shropshire. There weren’t many people who could corroborate his generation.

Emma Kate Lanyon provided the quote here for this Chronicler, but I do not have the source for that chronicler.

As you might expect, many people asked Old Tom his secret to longevity. He attributed his long life to his simple life in Shropshire and a regular diet of moldy green cheese, onions, and coarse bread. Emma shares that the bread and cheese would have been “accompanied by mild ale and sour…treated himself to a glass of cider on holidays. Pretty normal for farm laboourers, would have eaten what they raised on their farms, supplemented by some market wares on occasion.”

Parr did get married and in fact was married twice. The first time he married and claimed to be 80 years old. They had two children together but the children died in infancy. Emma Kate shares that Old Tom Parr went on to get married again, “20 years later, he committed an affair and fathered a child.” That act of having an affair was a public offense for Parr who was required to “[appear] in church wearing a cloth of bastardy.” Emma Kate explains that this act was done to require a “Public act of penance, to shame this 101 year [old man.]”

Going to the Court of King Charles I

Old Tom Parr came to the attention of Thomas Howard, who was a prominent English courtier. He was famous for his “Grand Tour” (which is when young men of age and means travel around Europe, particularly Itlay) and was an avid collector of paintings. Howard brought Old Tom Parr to appear before King Charles I.

Travelling to London was quite a trip for Old Tom, who suffered from the pollution, the noise and speed at which life moved in the big city, as well as from the drastic change in diet. Emma Kate shares that Old Tom did complain while in London of difficulty breathing.

He was treated as a spectacle while in London and the exertion of his trip would ultimately lead to his death. Old Tom Parr died in 1635, within just a few weeks of his visit to London and the King ordered him to be buried at Westminster Abbey. The tomb there is inscribed with Old Tom’s age of 152 years.

The Autopsy of Old Tom Parr

After his death there was a great curiosity about how Old Tom Parr had managed to live as long as he did. In an effort to discover the secrets, an autopsy of his body was performed by notable physician of the period, William Harvey. Harvey’s results were published in a book by John Betts titled De ortu et natura sanguinis. At the time, Harvey was unable to find any damage to Parr’s internal organs nor any definable cause of death. Modern doctors have reviewed Harvey’s findings since then and are divided about their interpretation. Some doctors think Parr may have only been around 70, while others remain unsure.