Pirates and Privateers with James Seth 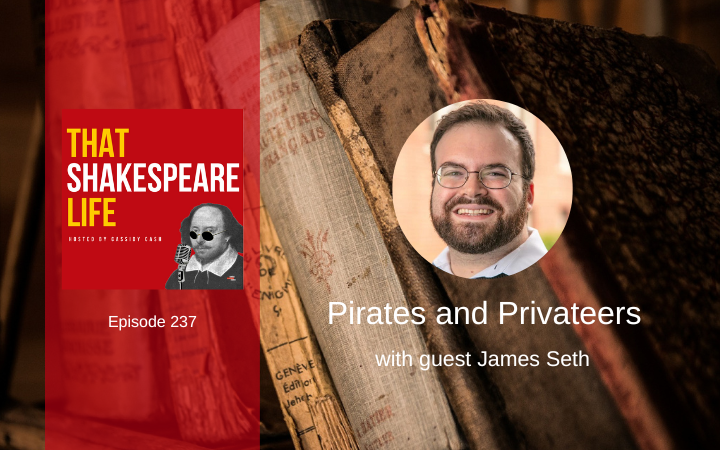 From 1560 until her death in 1603, Queen Elizabeth employed a group of privateers to raid, pillage, and rob ships that were acting against English interests. This group of private sailors known as sea dogs included famous naval explorers like Sir Francis Drake who circumnavigated the world, and Sir Walter Raleigh who founded the colony of Roanoke and went looking for El Dorado, the city of gold. Reports of the sea dogs and other fantastic tales of naval adventures were cataloged in 16-17th century travel diaries along with the writings of professional travel writers, all of whom sent amazing stories of wild exploits back to England where playwrights like William Shakespeare were ready to include them on stage. Our guest this week, James Seth, is the author of Maritime Musicians and Performers on Early Modern English Voyages. James joins us today to share the history of Elizabeth’s sea dogs, the musical entertainment that would have been available while traveling at sea, and exactly what real life maritime stories inspired characters from Shakespeare’s plays.

Dr. James Seth is currently an Assistant Professor of English at Central Washington University. He teaches courses on Shakespeare, early modern drama, maritime literature and culture, poetry and poetics, and gender and sexuality. He is also a faculty member in the Women’s, Gender, and Sexuality Studies Program at CWU. As a researcher, he has published on topics including early English shipboard performance, Shakespeare and oceanic folklore, and early modern maritime visual art. His first book, Maritime Musicians and Performers on Early Modern English Voyages: The Lives of the Seafaring Middle Class, will be published by Amsterdam University Press is available on Amazon and at other academic retailers.

“Strange Fish: Caliban’s Sea-changes and the Problems of Classification.” The Metaphor of the Monster: Interdisciplinary Approaches to Understanding the Monstrous Other. Eds. Keith Moser and Karina Zelaya. London: Bloomsbury, 2020. Link.

“Shakespeare’s Sea Dogs and Archetypes of Constancy in The Comedy of Errors and Twelfth Night.” Shakespeare Newsletter, vol. 67, no. 2 [300], 2018. EBSCOhost, search.ebscohost.com/login.aspx?direct=true&db=mzh&AN=2019580888&site=ehost-live.

Sea Dogs was a term for ferocious sea creatures

The term “sea dog” was a colloquial expression used to describe a variety of sea creatures. These were not just mythical or legendary creatures like you might think of the Loch ness Monster, for example, but real creatures like sharks or squid would have been called sea dogs in Shakespeare’s lifetime. (Source) As James points out in today’s episode, seals were specifically called sea dogs because of their bark.

In fact, the term “sea dog” was never a term used to describe the privateers that worked under Elizabeth I. As James explains, this is a term that gets applied in retrospect by those that studied this group of sailors in later centuries.

[“Sea dog’] was talking about the seal–and you see “dogfish” also talking about the seal. Generally it referred to animals, not an old sailor. The first English use was William Philipp translation of Discourses of Voyages into the East and West iNdies 1598. The term [sea dog] only applied to animals in [Elizabeth I’s] life. Elizabeth does refer to Raleigh as a “Silly pug” but the term didn’t apply to sailors until well after Elizabeth’s death…[it isn’t until] 1871 that “sea dogs” gets applied to privateers.

Sir Francis Drake was the most reputable sea dog

The name most people recognize when talking about Elizabeth’s band of privateers is undoubtedly Sir Francis Drake. He has connections to the modern day United States for having pillaged ships off the coast of present day San Francisco during his lifetime. They were all tasked with raiding Spanish ships (chasing Spain being what brought Drake to California), but they were anywhere Spanish ships were working. John Hawkins was most active in the Caribbean, but sea dogs were active in the Barbary States and along trade routes between England, Africa, and the Americas. (Source)

Regardless of where they operated, the differences between sea dogs and pirates was only in whether or not their behavior had been sanctioned by the crown. The actual day to day activities–that of pillaging, raiding, stealing, and otherwise committing acts of violence, was practically the same. As James explains, the difference was only in whether or not the crown was backing you:

Being a sea dog meant you were sanctioned as a privateer, backed by the crown. If you were called a sea dog (the way we know it today), you were contracted by Elizabeth for this task, even if you personally profited from it (which Raleigh did). Pirates on the other hand were not backed by any official government. There were pirates existing and plundering at the same time as the privateers, but the distinction is their [government approval.]

Sea creatures, and real life sightings of them, were recorded during Shakespeare’s lifetime. Travel diaries, and their stories, were circulated back in England and some of the contents even made it into Shakespeare’s plays.

In 1609 John Rolfe was part of the party of sailors who travelled on the Sea Venture. When the ship landed at Bermuda, John Rolfe’s first wife (whose name James suggests is Sarah) gave birth to a daughter. They christened her after the island and named her Bermuda, but the baby would die on the island before her family and the rest of the crew could finish their preparations to go on to Virginia.

There are several connections to Shakespeare’s plays which we have discussed on our show here:

We obviously cannot prove empirically that Shakespeare read any of the travel journals by writers like Rolfe or Frobisher, but mentions of characters at sea, following similar journeys, including key elements from these stories suggests that Shakespeare (and, indeed, the society of England) knew of those tales. James says that elements like the tiger ship in Twelfth Night suggests , “Even if Shakespeare didn’t read the travel journals, he was absolutely familiar with the stories.”

Entertainment on board ship included music, and even plays

The main purpose of James’ latest book was to explore entertainment on board ships and specifically the role of music and plays in the amusement of sailors or passengers during a long journey.

He shares that “Voyages listing musicians and trumpeters, they were amateurs, not hired to perform plays at sea. But you have players essentially who were doing different things. [As an example, the] Third voyage of the East India Company, essentially the spice trading…were going through Sierra Leone, and in one notable stop in 1607, they had a performance for a Portuguese educated ambassador, and many journals and debated historical information tells they could have performed Hamlet. There are additional links with Nicholas Ling, the editor of the first few Hamlet quartos, was also a supplier for the 3rd voyage, could have been related.”

The story about Hamlet being performed onboard the Red Dragon specifically has been debunked by recent scholarship that suggests it was not Shakespeare’s Hamlet, but the idea that plays were used onboard ship remains plausible. You can learn more about the Red Dragon specifically in this episode of “Did Shakespeare?” on YouTube. In this episode is where I share additional information on the records used to establish the theory about Hamlet on the Red Dragon and what new research came to light about the logbook entries that call the performance into question.